If there was ever a video game franchise that made me instantly not regret who I just killed or what action I have just set in motion, it’s the Wolfenstein games. There’s just something gratifying about “shooting, stabbing, strangling Nazis” as B.J. Blazkowicz would put it. As a long-time fan of the series I went into Youngblood open-minded, aware that it would not be the same as previous games as our Nazi killing hero does, like in the real world, age and thus become more restricted with time, but as time passes a new generation of Nazi hunters emerges in the streets of 80s Nazi-controlled Europe – The Blazkowicz sisters and just like their Daddy, they were born to kill Nazis. But does Youngblood follow in its predecessor’s footsteps of being a dystopia filled fun, gratifying, no-holds-barred Nazi killing, game – in my opinion…no. 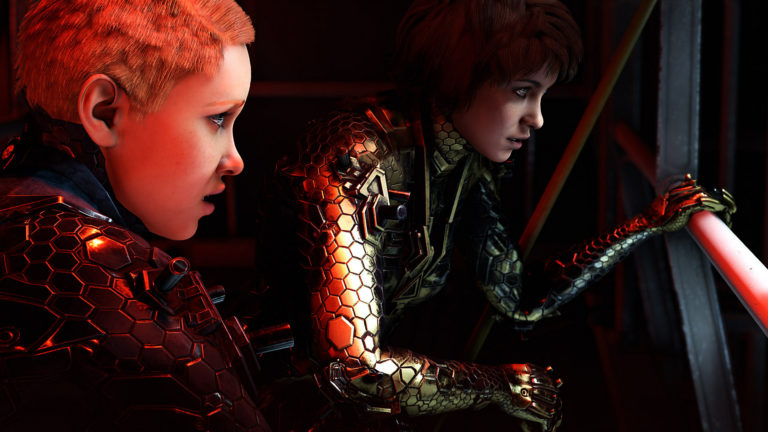 The overall gameplay of Youngblood does differ in relation to previous games. To start off you can choose what sister you play as Soph or Jess, whichever one you choose has no major impact on the story as both have the same abilities, they just start off with different weapons. You can then choose what colour of armour, headgear, pistol, melee and pep signal you begin with. After this, you are taken to a different screen where you have the option of host a game (play yourself), quick match (joining a game) or Join game (joining a co-op game) this is where you and a friend or a complete stranger can band together and kill Nazis. Personally, I prefer playing solo, with such a game as Wolfenstein where you can run out of ammo or die multiple times facing a boss I’d rather not have to worry about my teammate while I’m trying to kill a Nazi robot or beat a boss fight.

Customisation plays a considerable part in this game, whether it be upgrading your weapons to make them more effective against skilled soldiers or changing about the skin to make them stand out it’s up to you. There are also different types of upgrades to look out for which increase your speed, accuracy and damage. It is a welcome edition as the upgrades are quite satisfying in action and add more gratification, if like myself you like to run and gun, shooting or blowing up everything in your way. The only gripe I have with this is that these upgrades are purchased with silver coins found throughout the game, and these upgrades are necessary for defeating higher levelled enemies, and at times it can be tiresome scanning the dead soldiers and desks to only get three irksome coins when you just want a drum magazine for the shotgun. Pep-signals are another custom addition, these are used to give your sister some encouragement, and can be changed in the menu, they are handy for increasing your health or armour in a dire situation, there is a cool down, however.

The catacombs in Neu-Paris are your base of operations, where you can restock, explore the area, accept missions and undertake side quests, these side quests are given by the resistance fighters who populate the underground. While I like the idea of venturing out into the streets of Neu-Paris rescuing citizens, collecting equipment or planting car bombs in officials’ cars it feels like these missions are just fillers to make up for the length of the main campaign. In addition the free-roam aspect of exploring Neu-Paris is tethered to the level that you are, some areas are blocked until you reach a certain rank, but even then I felt it was lacklustre – don’t get me wrong the detail in the environments is impressive but I felt like something was missing, and the new collectables (floppy disks, audiotapes) didn’t make up for this.

One of the most disappointing aspects I came across was the restrained ability to use stealth and deadly takedowns on enemies. To be stealthy, you are forced to use the cloak skill (a new feature where you remain invisible and equip a melee weapon for a certain amount of time) which restricted your options to be sneaky. It felt like the game wasn’t designed for the option of stealth even though it had this feature. Enemies are usually closely banded together so taking out one solider, automatically alerts the other, and this is especially infuriating when there is a gargantuan Nazi robot equipped with lasers and bombs when all you want to do is stealthy pass under the arch it’s patrolling. An irritating inclusion to the game is the bothersome action of if you die (and lose all of your lives) in a mission/boss fight you are put back to the start of that quest, after spending 15-20 minutes trying to get to the waypoint to take on the foe this becomes tiresome very fast when you have to repeat it.

There were many aspects of the gameplay that I did enjoy and thought that they were a great inclusion in the game. I feel that the 80s theme throughout was superb and was handled well, from the inclusion of synth and drum period music, audiotapes, keypads and language used it was one of the elements that I did enjoy. It’s a shame, however, that the mundane story and repetitive side missions take away from what could have been another awesome game in the Wolfenstein franchise. 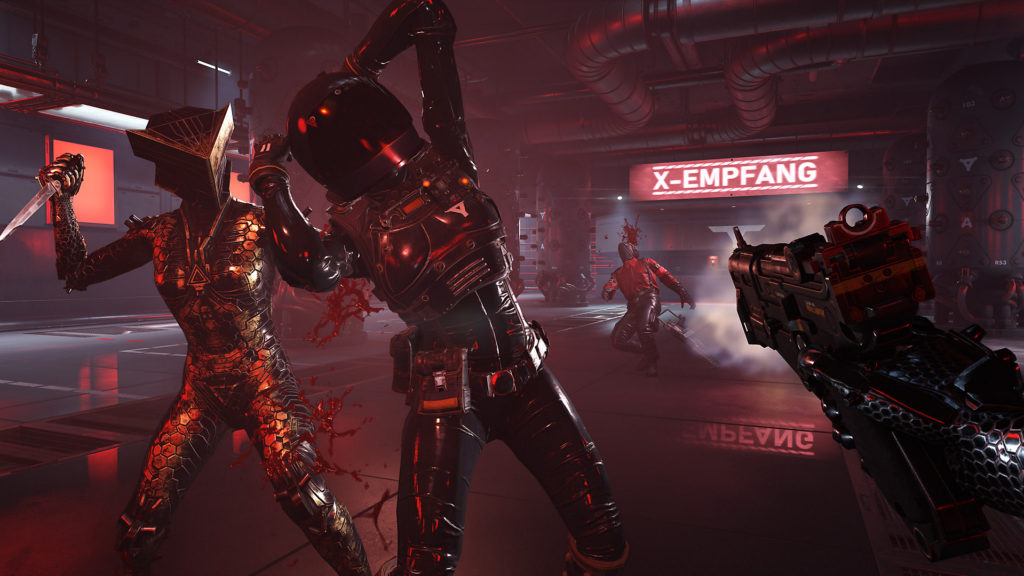 Visually, Youngblood looks and plays similarly to The New Colossus, and all be it with a few extensions. The way you hold and aim the gun are identical, simple and easy. There is a mini-map in the top right and your active mission detailed at the top left, bottom right is your ammo and throwing knives, above this is your sister’s health shown with a circular emblem, the ring around it depletes when she loses health, next to this is three hearts which show your shared lives (lose all of these and you start that level again), below this is your pep-signal emblem then your cloak emblem, finally at the bottom middle is your armour and health – at times the screen can feel cluttered.

As mentioned above I do appreciate the environment Youngblood is set in, and some areas do it better than others in showing the 80’s setting while maintaining the Wolfenstein world, one area I was impressed with was the Zeppelin: it had all the characteristics of a dense German airship, but it also had a bar, game room and mini-casino with audiotapes, keypads, robotic bar attendants and an impressive view from the ledge.

I did encounter some bugs while playing, some more intrusive than others, some were quite amusing though. The AI for Jess was quite messy at times; she sometimes got stuck in a wall, or suddenly developed spectacular joints in her knees as they twisted a 360-degree angle spontaneously. Sometimes defeated Commanders would dissipate into the ground and then pop back up again. 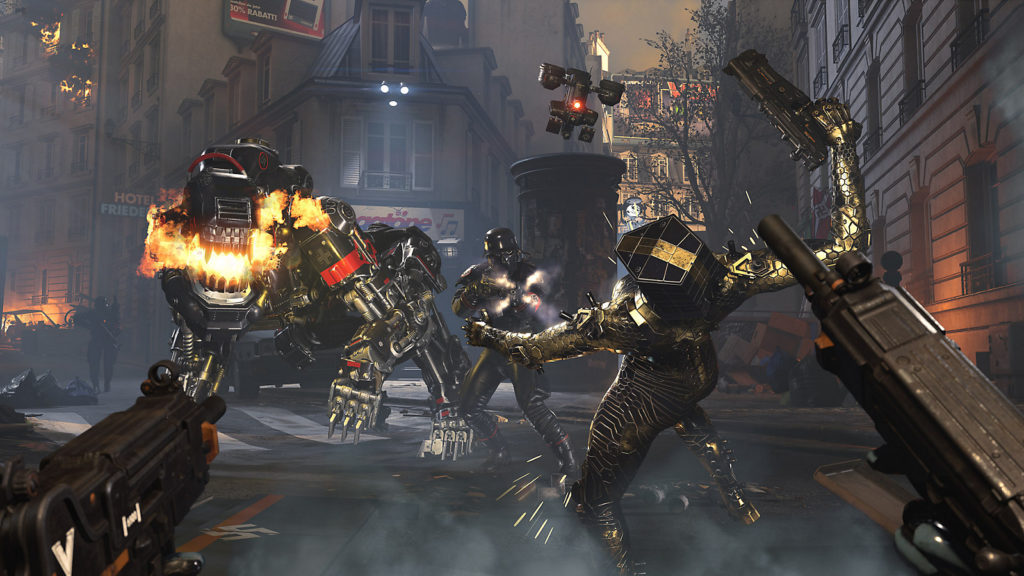 In terms of general sound, the game is similar to previous titles when thinking about gunfire, explosions enemy sounds and voices. Listening to the audiotapes found are engaging, they give you an in-depth account of events from soldiers or can just be a snippet of German 80s music (which is an alluring listen).

The voice acting in Youngblood is superb if it is the only thing very decent about it. B.J. Blazkowicz’s speech has always been a staple of the series, from his sombre tone to his defiant, tenacious speeches he doesn’t disappoint, same goes for his apperance in Youngblood. The Blazkowicz sisters’ voice acting is on par, but on a different level – you can deduce that Jess is more reserved, whereas Soph is outgoing, their relationship is cemented through their speech to each other, whether it be calling each other “Dude”, using the word “Tubular” or reciting lines from their favourite spy novels – the voice acting brings out the characters more and makes them likeable. 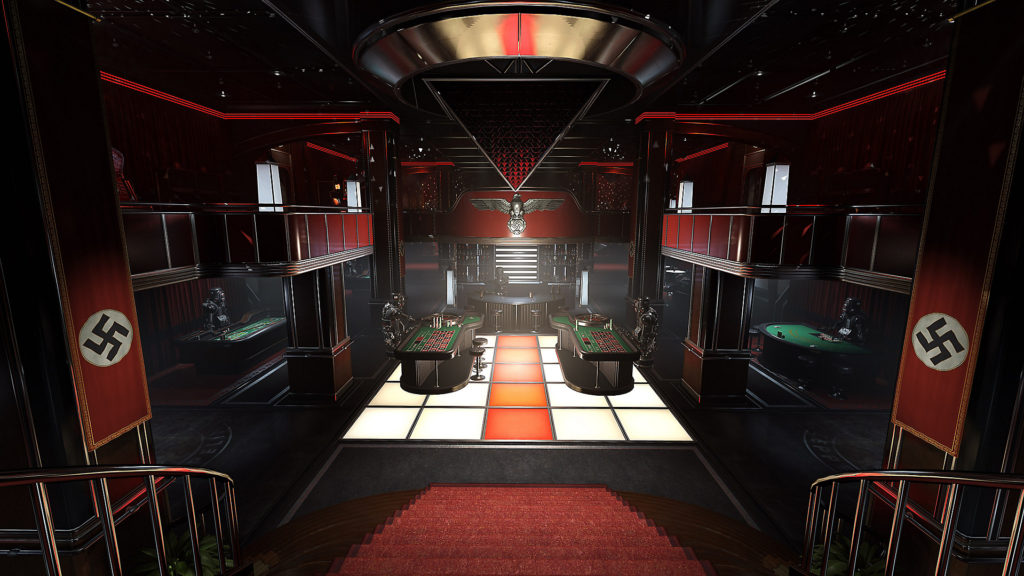 Overall, this has to be the game that I’ve been most disappointed in this year. I wasn’t expecting the kind of game New Colossus was due to the price, but for how long the main story is – that in itself isn’t worth it, sure I had fun with some of the side quests, but over time I didn’t even want to accept another. I think this could have been so much better, the little add-ons at the start left me optimistic, the customisation is a cool aspect and the whole 80s vibe was “bodacious”, however as I progressed the gameplay became so monotonous, be it having to search for coins to upgrade my gear, levelling up to have the cloak on longer or dying for the 5th time and going back to the start of the level, I just wanted to finish it as quickly as I could.

A Long Way Down