If I were to describe what Vambrace: Cold Soul was I would say think if Darkest Dungeon, High Fantasy with a sprinkle of Game of Thrones (over the Wall) had a baby then, one shall have some sort of idea what you are in for. Crazy hard gameplay, Elves, Dwarfs and Cold dead things.

Vambrace: Cold Souls is set in the Dwarven city of Icenaire, the city is now covered in Ice that will instantly freeze anything that touches it. The King of Shades now rules Icenaire. Our protagonist, Evelia Lyric, has a magic vambrace which allows her to pass through the deadly Ice. Clutching her codex, Evelia sets off to find out about her father, the vambrace and the city of Icenaire.

The over all story and its writing is fantaastic and will have you engaged the whole way though. 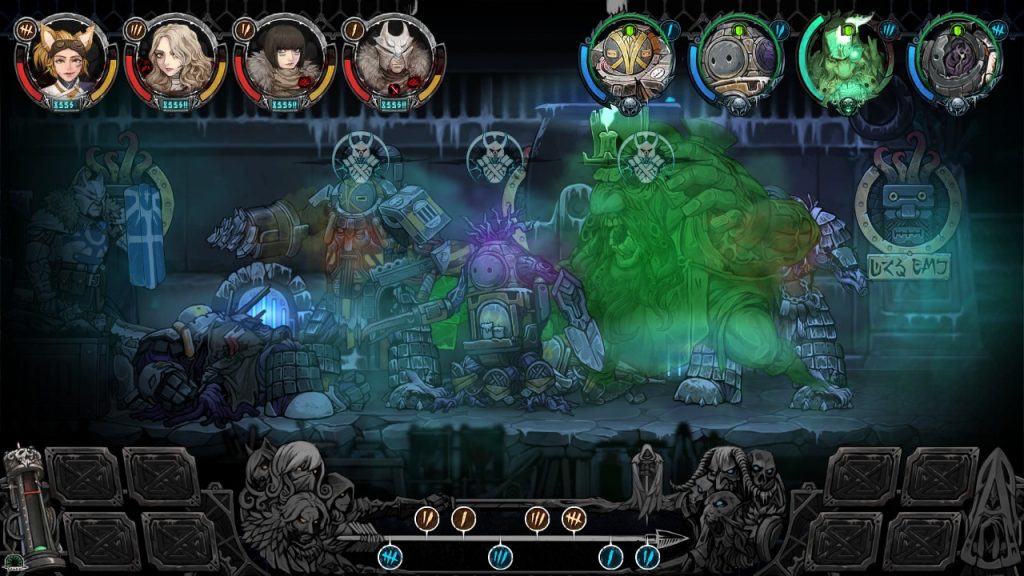 Vambrace: Cold Soul sticks to the Darkest Dungeon formula closely, it’s crazy hard. It has Permadeath with a high learning curve while simplifying some aspects and over complicating others.

The game starts with a lot of reading, and I mean a lot. It is trying to get that JRPG, feel with a lot of set up for the story and places etc. It seems to fall short of the mark; there is nothing wrong with the writing; in fact, the writing is excellent throughout the game. I feel as if there was too much emphasis on this, I would have liked to see more of the story play out through the first dungeon to make it feel more natural and have the tutorial at the same time.

Speaking of the tutorial, this is one aspect that the developers got so wrong and it hurts the start of the game. The tutorial helps almost nothing; it only explains part of each of the mechanics and leaves the player to figure out the rest. I know the game is hard and the devs wanted the player to learn as they go, they should have left the tutorial out with what it explains.

Now that is out of the way lets break down gameplay.

The gameplay is very much like Darkest Dungeon, your team of four go out into the dungeons, slowly and methodically progressing until you reach the exit. It does, however, throw its own ideas to change from the Darkest Dungeon formula. While traversing the towns the battle system works like any other JRPG with the attack order being decided though stats. The fight is over when the enemy team is wiped out or Evelia is killed. I play mainly JRPG’s and i felt right at home, this does not however make the game easy. The odds are stacked against Evalie from the get go, with the shrinking vigour to the randomly placed enemies not to mention the way the dungeon is set up. Everything is made to make the player feel vulnerable. It does an excellent job of this.

Our protagonist can have up to three companions with her at any one time. The game has ten different classes to pick from, making sure the right classes go out into the dungeon is crucial. There are only eight stats to worry about with companions, these are;

Health – How many times you can be hit until they die. Death is permanent.
Vigour – This is how long the class can stay out in the cold before they start to freeze. This drops by one in every room visited when in a dungeon.
Capacity – All four of the capacities are added together for an overall weight limit of the group. Each item has its own weight.
Combat – This is how much damage they can dish out.
Awareness – This shows how well the class can spot and avoid traps along with their battle turn.
Overwatch – This shows how much health and vigour the party will get while resting at a campfire.
Sleight – This stat governs how well a class can pick locks.
Merchantry – This allows for discounts with the merchants.

Some skills are far more useful then others you will learn what ones help more while playing. The class skill points are set whereas Evelia can improve all of her stats when she gains an ability point during gameplay. I recommend knowing the style you want before you invest as it is set after picked.

This is the next point I will talk about, most of the game is trial and error and death while you figure out what that ability does or what something else means. This makes the game feel very grindy, and there is a lot of going back to town and selling restocking and making items to help you move a little bit further in the game. I was comfortable with this as I like these sort of games, but this difficulty could put a lot of people off. For the first hour, I died more then I progressed, it was not till almost two hours in the game I met the first boss and died. This is a drag when Evelia dies you start again from town and have to make it back to the boss from the start. Making the game feel even more grindy. You will even come across different choices to make in small events (see picture below), here you pick a class and then a response for this one it is try the food or exaimine the food. Once you pick the response it is done to the RNG to decide the fate of the picked class. In my time most results where negative.

Vambrace: Cold Soul is not totally heartless and wants you to die every time you are in a dungeon, there are numerous ways to regain health and vigour whiles exploring with some restrictions adding a massively important bit of tactical thinking in the game. Curative items can only be used at a campfire, this means some tactical thought as the map is random there is no way to tell where the campfires are. So with the minimal regenerative items, the party will have its do I or don’t I use them. Along with the items, there is where the overwatch stat comes in to play, the class with the highest overwatch is the only choice here. As it is possible to raise the health and vigour of the part the same number at the stat. There is a trade-off for using the overwatch stat at a campfire, it increases terror.

What is terror, well terror is outside the other things I have talked about the most crucial world-changing figure to be wary of. Before the first expedition out into the frozen waste, Evelia is given a Geistometer. The Geistometer is displayed at the bottom of the HUD while exploring. The green bar raises with each room visited along with activities at the campfire. Once the bar reaches the red line, every room becomes a death trap with Spooks attacking the party. Having this Geistometer puts extra tension on the player to not waste time exploring, especially in the early game, mix it with the loss of vigour the stress is though the roof. It again makes the player use forward-thinking.

Vambrace: Cold Souls is by no means a perfect game, and to copy the Darkest Dungeon formula it needs to be unique. It added enough to make it somewhat its own game, but fails with the tutorial and explaining next to nothing. If you can get past the first few hours and figure out the mechanics, this is a great game. There is still a lot I could discuss I do however feel I covered the more important points. 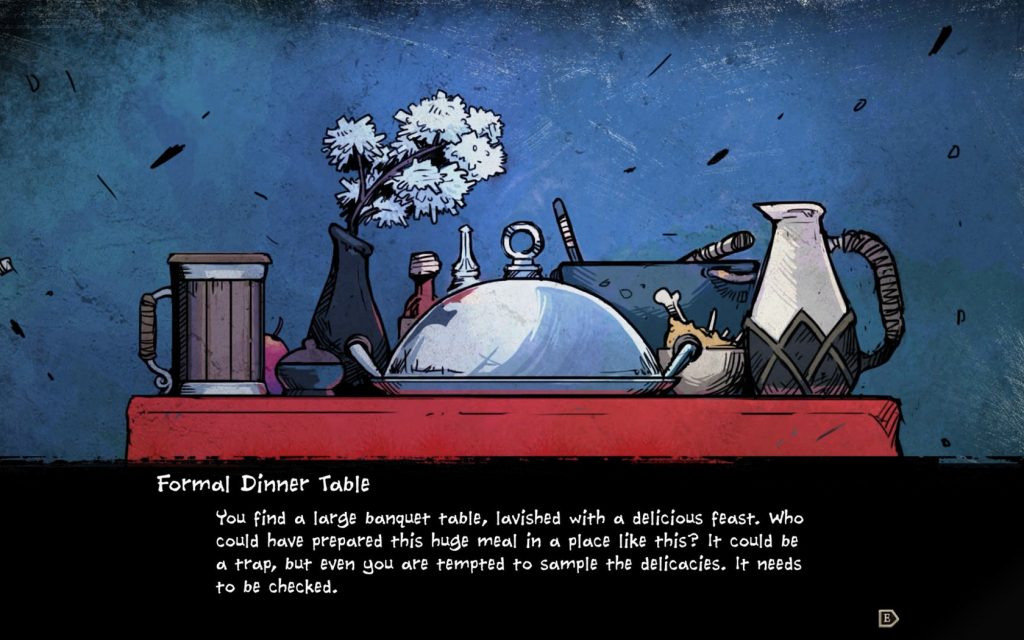 In the visual department Vambrace: Cold Soul is just WOW! The art direction is beautiful. Each of the charters is animated beautifully in 2D that gives off the feeling of 3D models. Each of the characters you meet from the hired units in the party and the story-based characters are all stunning, and each matches the personality well. For instance, Volsung, a Dwarf that build items for the resistance had goggles on and a tool belt or the Captain of the guard who has spiky red hair that fits her temperament.

The colour palette lends a lot to the game’s atmosphere and feeling of oppression. Everything has a washed-out grey tinge to it. From the streets in the city to the desolate town in missions. I gave off the feeling of hopelessness and lost cause, it is not as striking as Darkest Dungeon, but it still gives off the eeriness of the game as mentioned earlier. I would have liked to see a few variations in colours, especially for the frozen corpses, I do, however, like the colours used in-game.

I did not come across any bugs that were of any note, I do feel the load screens are a little long, apart from that this the game runs smooth. I played this in docked mode mainly as I would spend hours playing and did not want my battery to die. 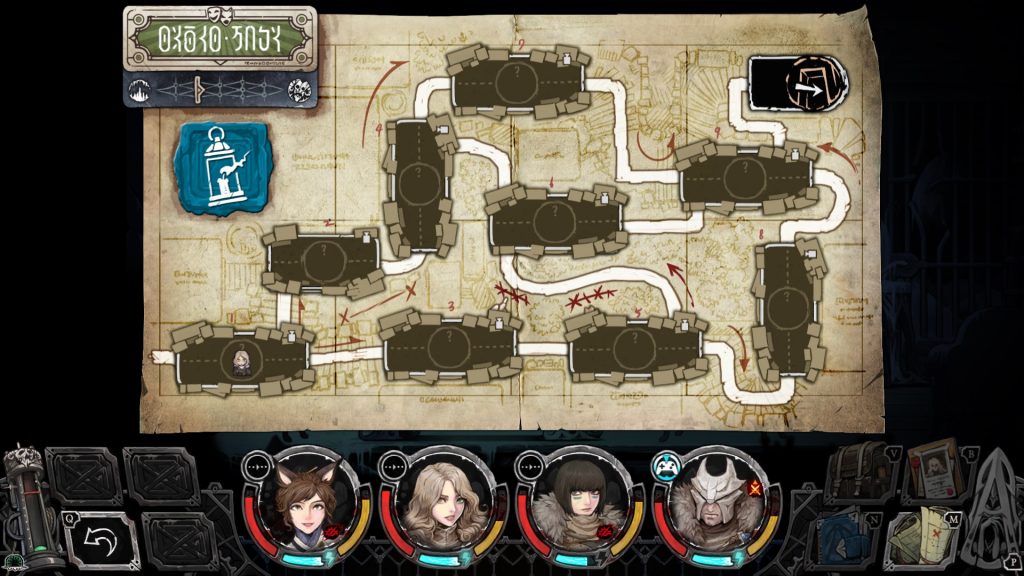 The sound design is decent enough, from the eery ambient noises as you traverse the frozen wastes to the excellent music score that is played throughout the game. As you move from room to room, there is this shudder from Evelia that gives not only the impression that the world is cold, but it ramps up the tension knowing the team has lost one vigour and are one step closer to death. Even as the noise starts to grate after the first ten times it still did not lose the air of tension, it did, however, make me think why are you not all better wrapped up? While in a fight the sounds of the attacks feel somewhat weighty but fall a little short of feeling good and weighty, for instance, the Dragoon class I had welded a massive serrated sword, the sound effects did not make it sound serrated at all, in fact, the Shadow Mancer’s daggers seemed more substantial and dangerous.

The music is excellent; this adds a lot of mood to the game from the darker sounding fight music to the surprisingly good tune in the inn.

Overall the quality of the sound design is very good, but with one or two slight let downs. 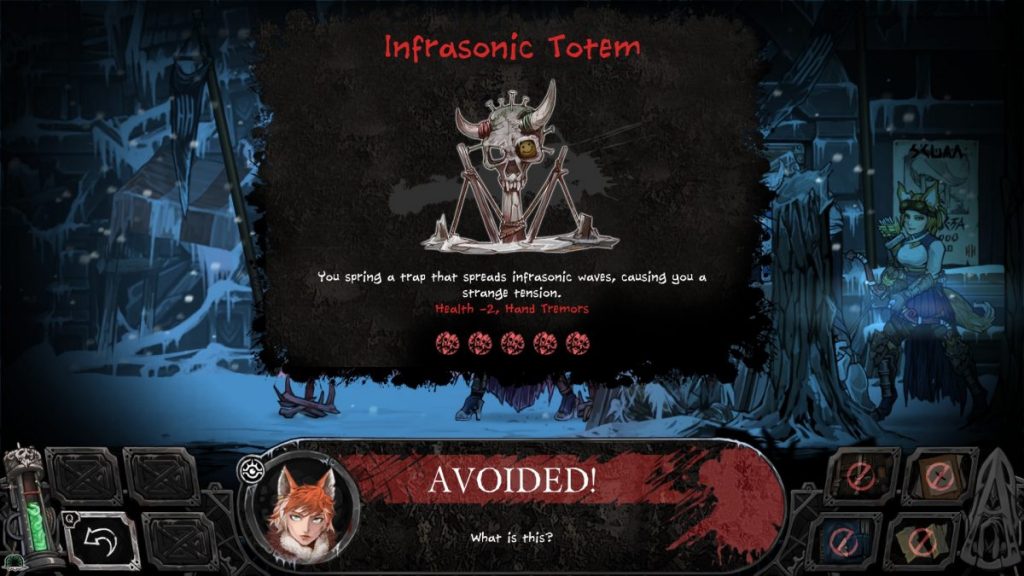 Vambrace: Cold Soul, is a well-written story-driven RPG, that looks amazing. The game will have you gripped with the writing and how pretty it looks.

Unfortunately, it was let down somewhat with the gameplay, poorly described tutorials, and almost nonexistent quick tooltips. I am one for hard games, this, however, felt more like a grind fest to build up supplies before attempting the mission and seemed to be artificially made harder then the difficulty being more natural and part of games progression.

Don’t take away from this it is a bad game. It is a lot of dying and trying again. If you like the Darkest Dungeon game, this is one that you could get in to, if the crazy hard gameplay is not your thing, avoid it or wait for a big sale.

Ender Lilies Quietus of the Knights