The very first thing that came to mind when I saw Valfaris was, “Oh Metalocalypse the video game…” For anyone not familiar with my thought, this is a cartoon show from Adult Swim. The show revolves around a Death Metal band called Dethklok that essential has become so worldwide popular they unassumingly rule it. Personally, the show is extremely underrated and freaking hilarious. I know this is a video game review, but I highly recommend it. The main reason why I thought this is because the character of this game looks exactly like Dethklok’s lead singer Nathan Explosion. Along with the metal themes of the show and the game, how could I not relate the two!?

Nathan Explosion, I mean Therion is the son of Valfaris. His father was the ruler of a mighty galactic fortress that inexplicably faded away for years. Now engrossed in ever-growing darkness the citadel has reappeared in the orbit of a dying sun. The ruthless Therion sets out to the resurfaced kingdom to unearth the root of what has become of his father’s legacy. 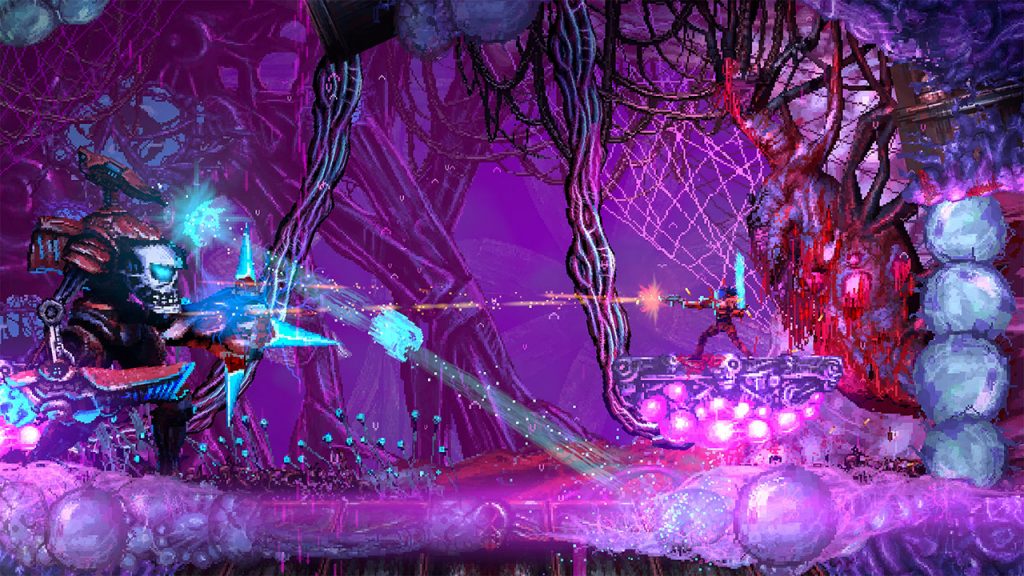 The game features a 2-D side-scrolling action-platforming gameplay style. Therion is equipped with a pistol, sword, and special weapon. I really loved the variety of weapons the creators offered. Typically a game like this would have the character wield either a melee or firing/ranged weapon, but they provided both. This provides the player to utilize his or her own playstyle. Are you a more up close and personal type player or prefer to attack from afar?

Every weapon can be upgraded by collecting enough blood metals that can be found by travelling off the beaten path of levels. As you progress in the game, more weapons in each category will be added to your inventory so do not rush to upgrade your starting weapons right off the bat.

Save points are generously laid out in the levels but feature an original way to use them. There is a green guitar pick like items to collect that are spent to use a save point. Do not worry, they are easy to find and get. The save points are also where you can upgrade your weapons.

A serious challenge is to be had throughout the game. At times it is brutal and not for the faint of hearts. There were plenty of gauntlet areas an bosses that I had to retry over a dozen times just to advance. One late stage of the game boss I feel like the creators dropped the ball on though. He can only be damaged by melee attacks so if you did not upgrade a sword to its max by then, I cannot imagine anyone being able to defeat him reasonably. I had my sword maxed out at the time, and it still took me forever to defeat him to the point I almost pluck out al my feathers out of frustration! 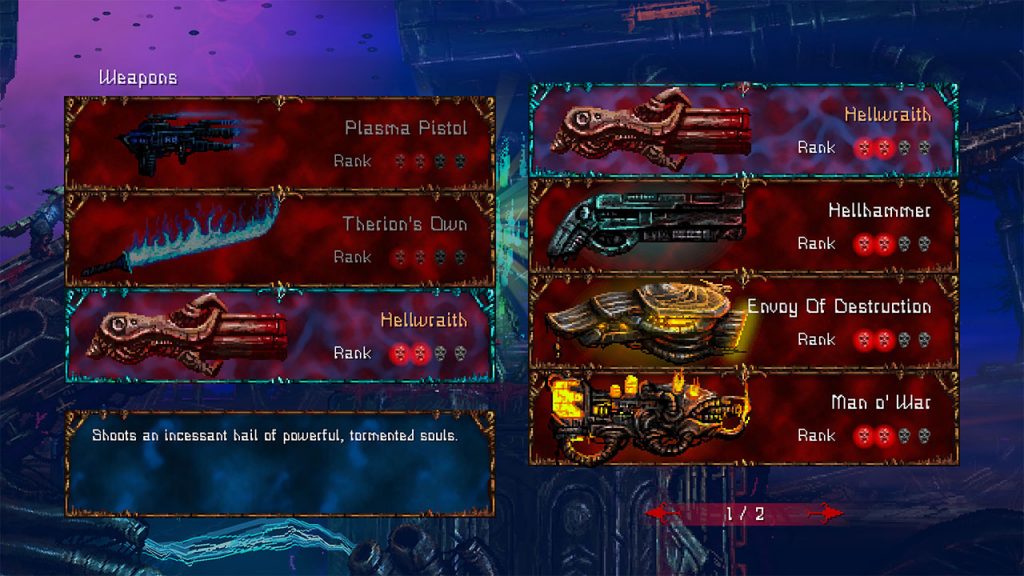 Large bonus points are earned in the visual department of Valfaris. The use of neon 80s like colours along with dark, decrepit metal structures for the level environments was a stroke of genius. Some levels utilize toxic greens and purples while others utilize electric blues. The enemies are so varied and grotesque it is glorious. The game earns its Mature rating with blood and gore to rival Mortal Kombat. Therion can slice enemies clean in half or blow them up into little pieces that fly all over the place. Really, the only aspect I did not like visually was how stiff Therion looks when he moves around. It just seemed odd to me.
I did not have any issues with the performance. 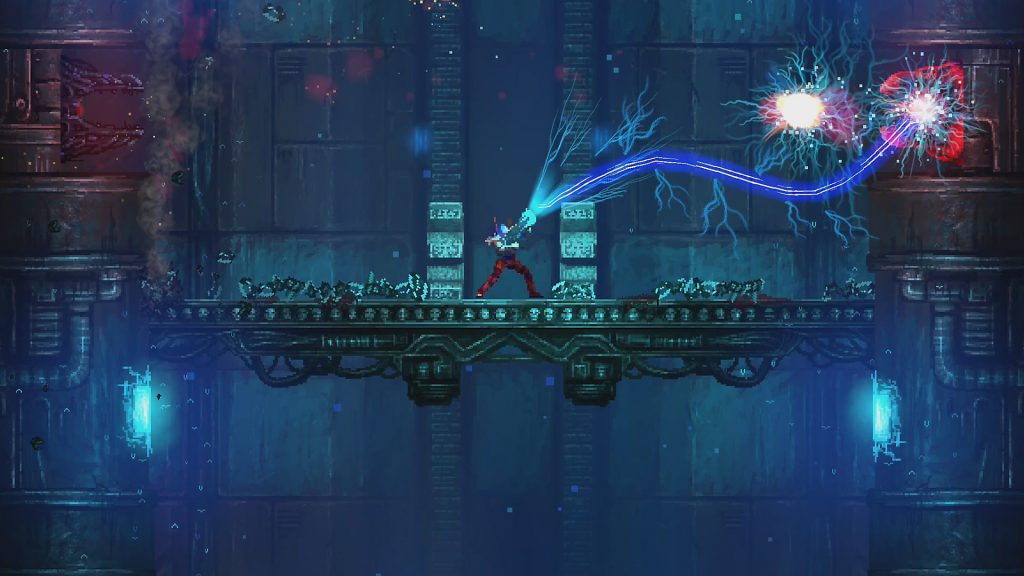 I cannot think of many games that have a heavy/death metal soundtrack, and it is amazing here. It is not my absolute favourite genre, but I do like plenty of songs in the category. I felt like finally there is a game made for people who enjoy this type of music. Perhaps the music can put the game into more of a niche position, but anyone that counts Valfaris out because they do not like this type of music is only missing out on a real gem and their loss. 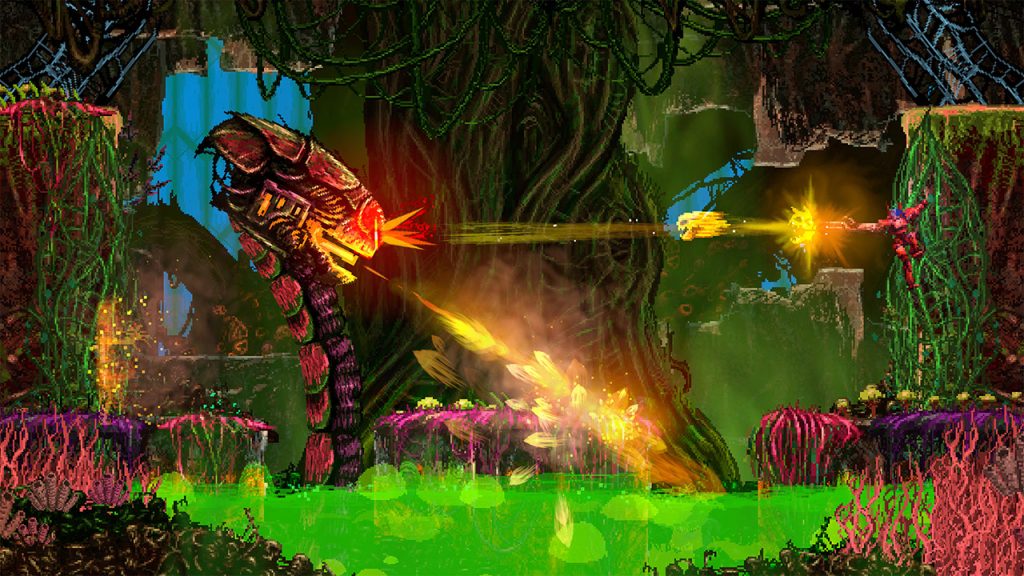 Valfaris had an uphill battle for me because I had already seen many review videos on it and had decided it was not for me. I am very glad the game fell into my lap to review because it really exceeded my expectations by a long shot! I was impressed by how the creators took a popular genre on the Switch and implement several unique aspects successfully. The game’s visual and heavy metal soundtrack really took the title over the top. At $24.99, it should at the very least be put on your Eshop wishlist for a sale if not a must get. Some sections felt a bit cheap, and one boss could potentially be nearly impossible if you do not upgrade your melee weapon, but other than that I was very impressed. Voice acting would have made the game nearly perfect.

For something a little difference check out check out our review of  Lucah: Born of a Dream HERE!