The topic of today’s review is brought to you by the folks at Arc System Works. You know them, you love them, and what you have come to know them for by now is mostly 2D anime fighting games, and I am here today to argue why they yet again do this exceedingly well with Under Birth In-Birth Exe: Late[cl-r], which by the way I will henceforth only refer to as Under Night In-Birth for convenience sake, and because it is hell to find all of those characters on my keyboard.

In Under Night In-Birth, a mysterious phenomenon, known only as “the Hollow Night,” has enveloped regions of Japan in darkness for several centuries. Every area affected by the Hollow Night is beset by shadowy monsters, known as “Voids”, who feed off of a power called “Existence.” Most humans don’t possess the ability to see or come in contact with Voids, and therefore remain safe. Our hero Hyde, however, is not so lucky. As one of a cast of unique characters, he is in possession of this unique power and therefore finds himself having to fight his way through the dangers of the Hollow Night and defeat those who would try to get in his way. Meanwhile, an organization known as Licht Kreis, who seek to protect people from these so-called Voids, are on a mission in Japan to do just that – slay Voids, and fight maverick In-births.

Now, being new to Under Night In-Birth, and a quick Google search telling me this is the game’s third re-release (each release adding new content), I admittedly had no idea who any of the characters were in and off themselves or in relation to each other prior to playing this game. While playing through Arcade Mode as the game’s poster boy Hyde, I did get showered with bits of exposition when he encountered characters he was close to, but it was nothing I could make any cohesive narrative out of. That’s where the Chronicles part of the game comes into play. Here you pick a character, and then play through a visual novel version of their particular story, which acts as a prologue to the Arcade mode itself.

By and large, it is your typical dark anime story about high-schoolers with superhuman powers fighting off the demons of the night, all while attempting to keep a sacred legendary power out of the villains grasp. 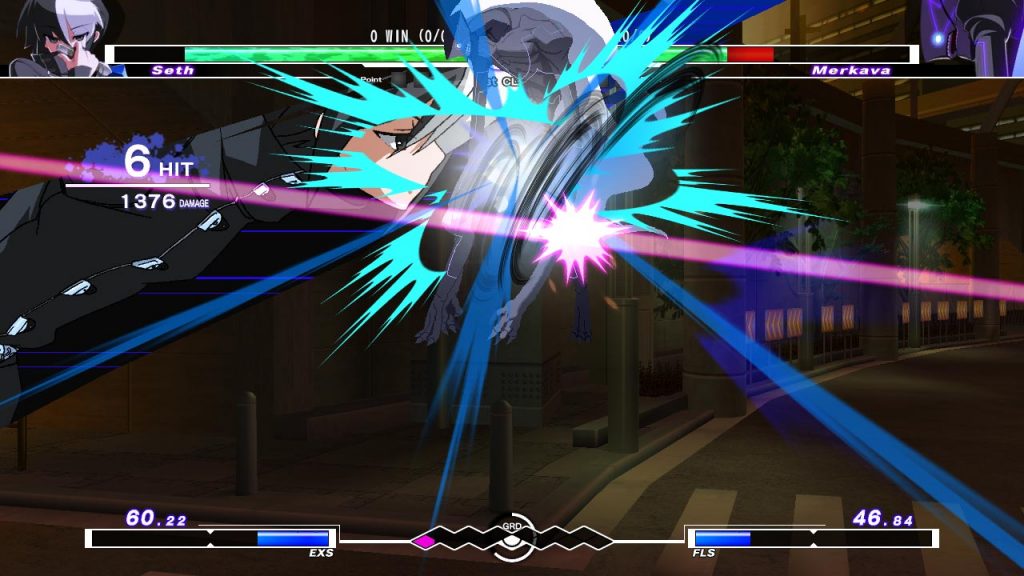 The complicated story aside (I am one to talk), Under Night In-Birth is, and I mean this in the best way possible, your run of the mill 2D anime fighter with a healthy selection of cool and quirky high-school students, some of which you may recognize from another work of theirs, being the cross-over fighter BlazBlue CrossTag, which also featured a handful of characters from Persona and Rooster Teeth’s RWBY show.

Long gone are the days of sprites, instead replaced with stunningly detailed and beautiful high quality animated 2D models that, upon first glance, do look like sprites, kind of like how you could sort of squint your eyes in DragonBall FighterZ (same developer) and mistake those 3D models for HD sprites. They, and all of their moves, are all expertly crafted and fantastically animated. I seriously never thought a 2D anime game could look this good, perhaps aside from the aforementioned BlazBlue series.

Now, full disclosure, while I love a good fighting game, I am also the type who has no idea what I am doing in fighting games in general. While I don’t button mash per se, because I do want to at least try, I do, at best, fumble around with the controls and hope that I make something cool happen. That said, I still managed to find a great deal of enjoyment in Under Night In-Birth with the over the top colourful combos I did manage to pull off. All of the characters are visually distinct and interesting, there wasn’t a single one of them I did not want to try out, to see what kind of crazy stuff they could do – and this is an anime game, so you know it is going to get crazy.

Not only does the game have a long title that will put your tongue in a twist, but the main menu is quite overwhelming too, but is at the same time a textbook example of what I think a fighting game should be. With no less than 15 options including Arcade, Chronicles, Versus, Network, Score Attack, Time Attack, Training etc the gang is all here. Now I am personally a very simple guy. All I need is a good story mode, perhaps an arcade mode, and then just a good ol’ versus mode, but as you can see, Under Night In-Birth will sure sate the needs and appetite of even the most craving gamer. 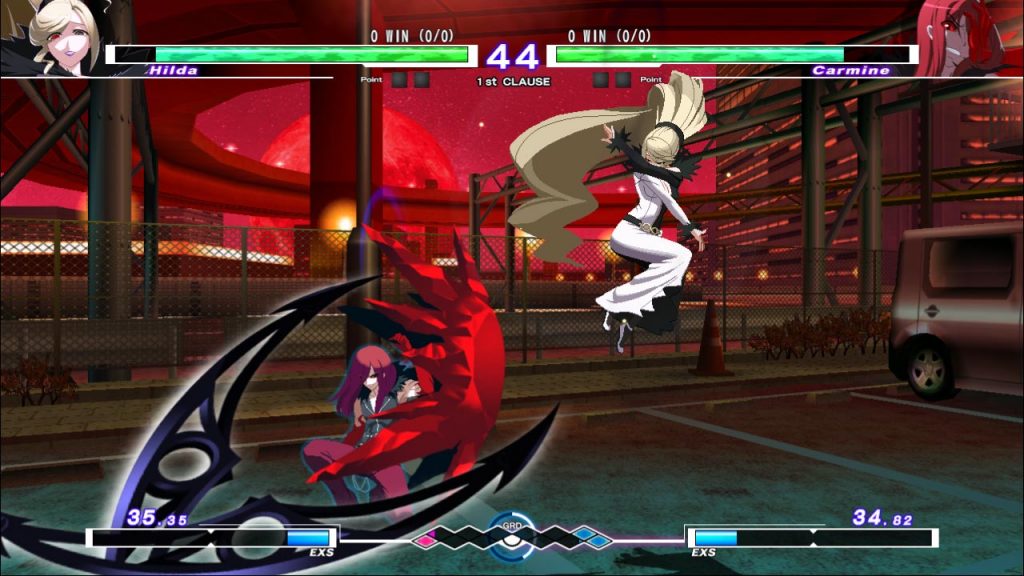 Japanese vocals to a semi-animated intro cutscene sets the stage, and the rest of the soundtrack, along with full Japanese voice acting, is as you would expect from a dark anime fighter which clearly takes itself seriously. It all fits very well, and during battle lends itself to keep your blood boiling for landing those decisive combos! 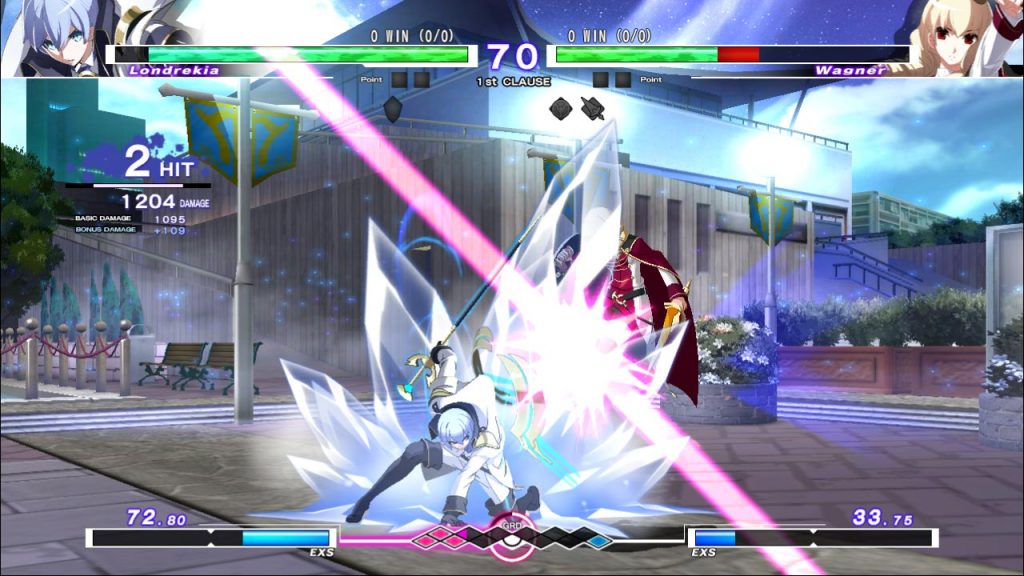 As I already touched on earlier, the characters in this game look amazing and so do their attacks. Even on the Switch the game runs perfectly, and no matter how fast and intense the action gets, it never struggles to keep up. I do not hold quite the same praise for the 3D backgrounds that stick out from the 2D animated characters and quite frankly range from decent to ugly. Oh well, at least you are not going to pay them much attention once you are deeply concentrated about beating your foe to smithereens. I don’t know, I just personally never really feel that 3D and 2D mesh well in these cases. This was also what didn’t sell me about Octopath Traveler.

Going for a decent £34.99, I feel the price, for a game of this quality and content, is justified. You definitely get your money’s worth both in terms of the fighting game itself, the selection of original characters, and just the sheer amount of challenging modes to immerse yourself and spend hours on. I may poke fun at the absurdly long and twisty title, but as my first foray into the series, Under Night In-Birth certain did impress and intrigue me, if only for it’s amazing anime visuals. If not for the single player content on its own, this is easily one of those multiplayer games you can spend an entire weekend with, with your friends.