A long time ago way back 2001, there was a game called ‘Advanced Wars’ it was a top-down turn-based tactical RPG. It was different in one way, it was up to date war machines set in a world that could easily be somewhere on earth and was in short, outstanding. Many games have come and gone since then trying to emulate this look and feel. Wargroove being closest, but again set in a time long ago. Here we have Tiny Metal: Full Metal Rumble, the sequel to the 2017 Tiny Metal game, but is it any good? Find out here;

Take on the role of Commander Wolfram as she chases her brother to Land’s End and snow-covered mountain range. Here Commander Wolfram is at a standstill as her enemies rain down a hail of bullets and artillery fire. It will be an uphill battle from here on out.

Also, play as Artemisian Captain Nathan Gries as he looks for Lost Tech as well as Zipanese Lord General Tsukumo who hunts for a new enemy.

The story is not overly deep but is detailed enough to keep you interested. However, I did not feel invested in any of the plights the factions were dealing with. 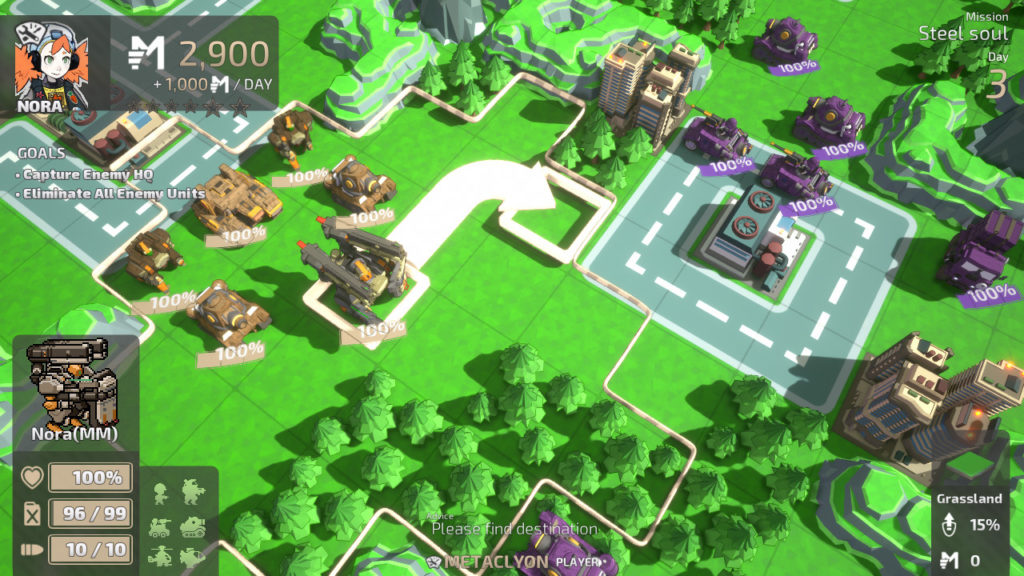 The gameplay is where Tiny Metal: Full Metal Rumble has a very nostalgic feel to the turn-based combat, but with its own little added twists.
Like other games of its ilk, the game uses a point and click system. Firstly, pick a unit and move it within its movement range that is highlighted on the map. The same mechanic is used to attack except this time only one of four directions can be pick, and attacks are ranged based. For example, the ground trooper can only attack the next grid space, whereas a ground to air missile launcher can attack around five spaces away.

Attacks are not as simple as the pick the target hit the target, depending on several factors, the percentage chance of an attack hitting will differ. It depends a lot on what unit attacks what unit, as some are better suited to attack different units. Where the unit is, I.E. in woodlands or in a building will lower the chance of hitting it. Lastly, the type of attack – some units have multiple attacks. Unlike games like XCOM, the RNG is considerably fairer, with more attacks landing than missing. The one addition I like that has been added to the mechanics is resource management. As vehicles can run out of fuel and ammo after a set amount of turns. If this happens, it becomes a sitting duck, so making sure they are fuelled and stocked becomes more vital later on in the game. Troops can also run out of ammo.

Attacking and defeating enemies is a massive part of the gameplay, but it is not entirely the most important part. On the map there’s building, like factories that can be captured. It takes no less than two days (a turn is counted in days in-game) to capture a building, depending on how many troops are in the unit. Regular ground troops have ten soldiers within a unit, a building needs a body count of twenty, so it requires two days to be captured if less than ten it will take more turns.

Once a building is occupied, it will start to produce money at the start of the player’s next day. It is vital to the success of most missions as generally when starting you will be out-gunned and getting more troops and vehicles in fast is critical. Factories allow the production of one troop type per day. The more factories, the more units that can be produced as long as there are funds. They’re captured in the same manner as buildings. There’s a vast array of different units that can be built from simple troops, to fighter jet and even mechs — giving plenty of variety to the gameplay. Once they’re unlocked of course. The most significant boosts to your army are the hero troops that can be called upon that are like overpowered regular troops. Along with the C.O. boosts such as lower capture time and increase movement.

There are 33 levels in the game, giving the game a decent playtime upwards of 30 hours to do everything. There are also different objectives in missions stopping the levels getting too repetitive.

The gameplay is excellent and in some respects better than ‘Advanced Wars’ even if most of it is taken from it. Tiny Metal: Full Metal Rumble, feels and plays like the spiritual successor we need to carry on the legacy of ‘Advanced Wars.’ 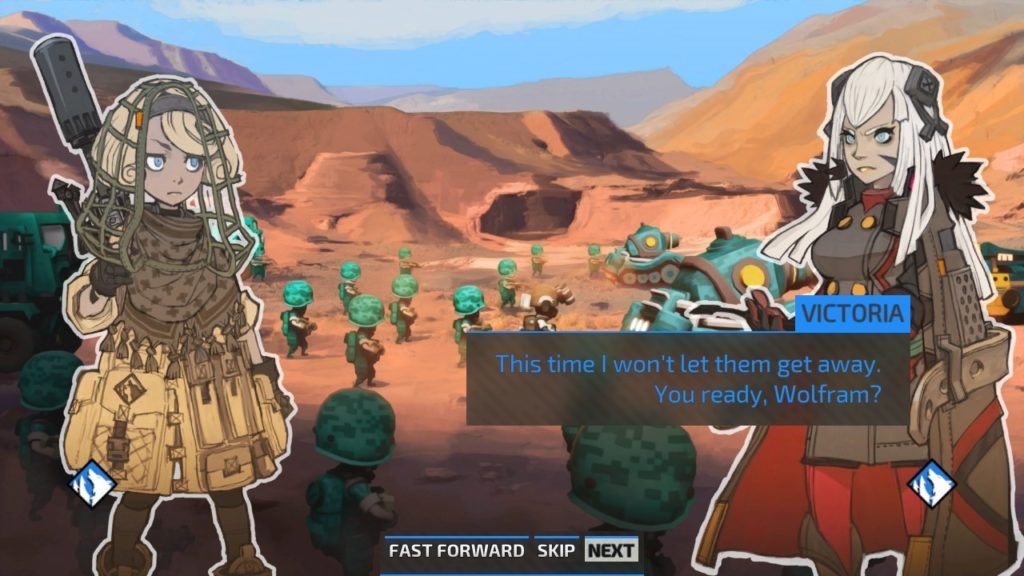 In the visual department, Tiny Metal: Full Metal Rumble is not too shabby. There are four main areas to look at in the visuals, the visual novel style cut-scenes, the world map, the game map and the attack sequences;

Cut-scenes – Within the visual novel style talks before the engagement, there’s a short conversation about the upcoming battle. The art style is chibi with the 2D characters in the foreground. In the background a more traditional hand-drawn interaction or the chibi style 3D animations. (The chibi style is kept throughout the games art style).

World Map – The world map is an isometric view of an extensive and detailed terrain style map, covering all biomes we would see on our world map.

Game Map – This is again isometric top-down view on a small area, and is beautifully rendered in 3D. The ‘Fog of war’ or in this case columns of war that covers the map will drop and disappear effortlessly to show more beautifully presented terrain with no slow down or problems at all. With a mainly bright and eye-catching colour pallet, this is the best looking part of the game. Even with the game looking nice it would have been a plus to have more variety of maps of buildings, there’s a limit to how many sky scrapers that look the same can be interesting. Even if there was variations of buildings to where about in the world map you where.

Attack Animations – These are rendered in a more of a traditional 3D style with the camera more shoulder height in the small boxed area showing the attack. The idea is good in theory, but the overall execution of the concept lacked polish. It’s nice to look at but did not feel as good as the rest of the visual styles.

Performance the game was great, nothing worth noting that I saw with my time playing. Looked great on both docked and handheld, I preferred handheld as it gave me that nostalgic feel of ‘Advanced Wars.’ 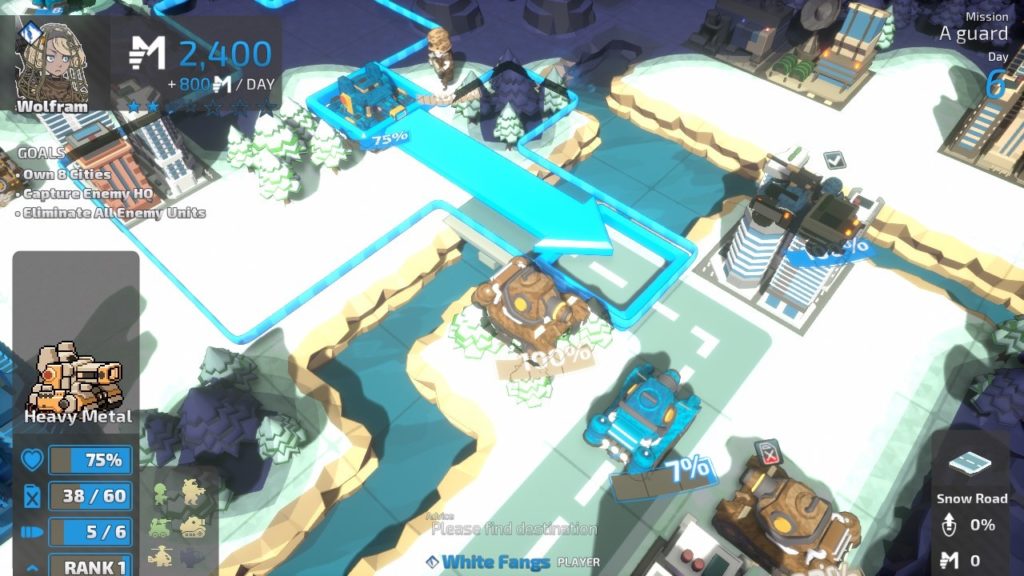 The sounds are everything you would want in a war game. When troops are marching it sounds great. The rattle of the machine guns, and reloading of the magazine, to even the mechanical swirl as the land to air missile pods spin around sounds spot on. There was no annoying sounds or any that did not fit the action among them.

The music was equally as good, giving the sense of battle while not being so distracting as to put the player off their next move. 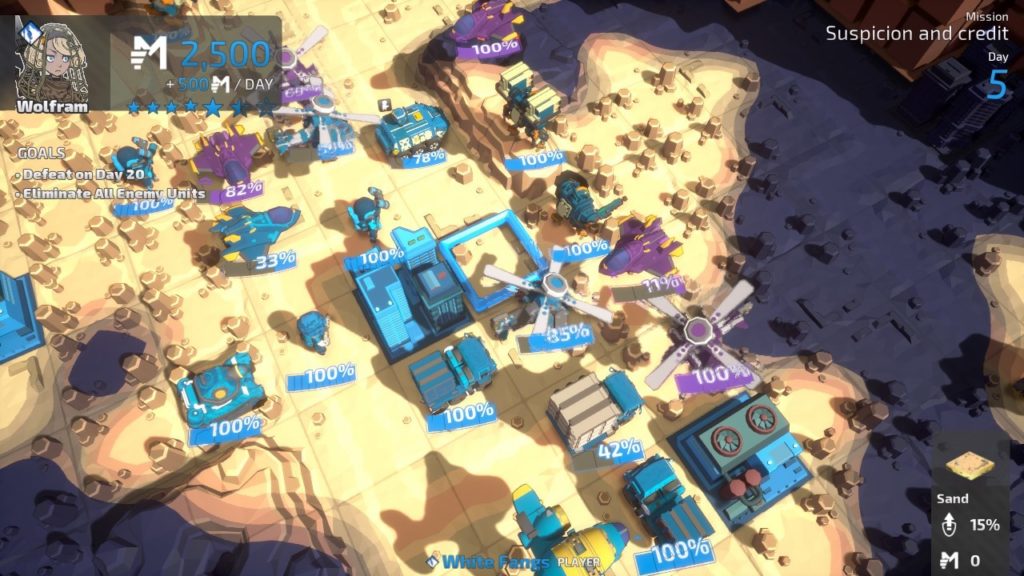 Tiny Metal: Full Metal Rumble as a whole, lives up to the ‘Advanced Wars’ legacy. Is it a perfect game? No. could it have been better? Sure. It is, however, the same can be said for most games out.

The game gets more things right then it does wrong, there’s plenty of content and gameplay is solid with excellent sound design and looks.

The big question is, should you buy it? If you like turn-based tactical gameplay then in my option YES! If you are thinking of starting or are weary of these game types, it is a good entry point and worth buying.

Check out this review of Bad North HERE! If you like tactical gameplay.