Indie games have found tremendous success by being willing to take risks. The AAA devs are unwilling or not allowed to. Whether this means tackling sensitive issues like addiction and cancer or trying out new gameplay mechanics; the indie scene has flourished. First-time developer Elliot Mahan and his studio Sungazer Software have entered the market trying to meld the worlds of retro JRPGs and platformers with The Tenth Line. Let’s see if one man’s passion project is a journey worth taking. 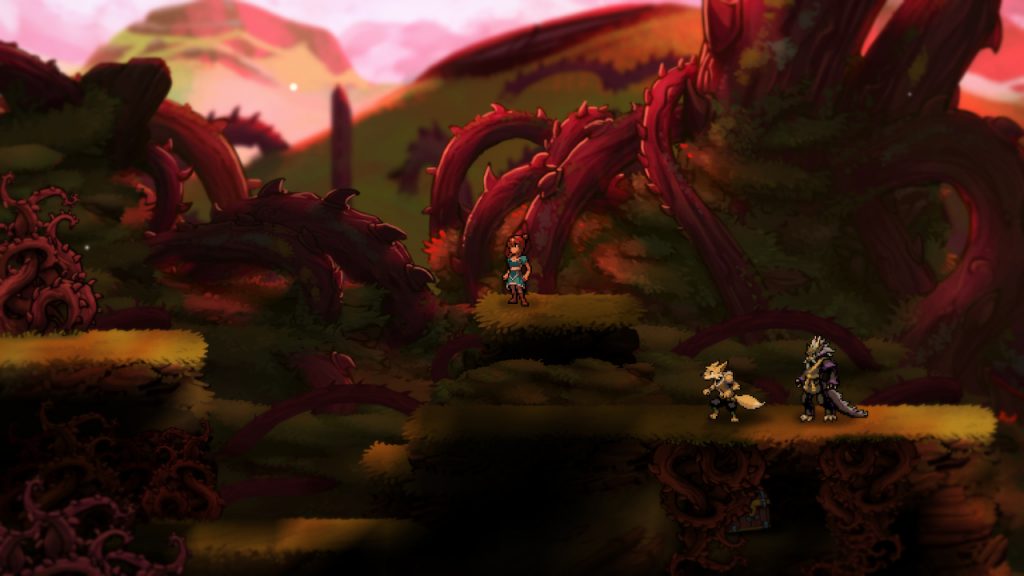 TTL presents its branching world to the player via side-scrolling platforming sections in specific regions or towns. While not truly an open world, the game does have a relatively decent-sized world map that allows for some choice in travel but ultimately ends up feeling linear. Each of the playable party members has their own locomotion that requires a minute to get used to. Tox (Draconmage) can leap a little higher using his teleportation jump, while the princess can push and pull objects in the world to help others jump to certain hard to reach places or to open up an area that other can travel in. Tox even has the ability to alter his elemental focus to use different types of breathe to remove obstacles or attack enemies. While these inclusions do help break up what could become a monotonous slog, they also inadvertently highlight a giant flaw in the design. When finishing a particular area all three characters must be at the exit. So if you rush into an area and get to the exit you have to go back and move the other two characters through as well. While not gaming breaking it is an annoyance that is compounded by the lack of variety in combat.

Combat in TTL, like the design, is a throwback to the bygone era of gaming. Players familiar with the turn based attacks of the early Final Fantasy or Phantasy Star games will feel right at home. When it is the player’s turn to engage, they are given the option to attack, rest or look. Looking acts as nothing more than a scan revealing enemy HP as well as their strengths and weaknesses if known. Each attack requires the use of a specified amount of SP. SP is gained by resting and is also generated between turns. Learning how to coordinate your playable characters and their attacks is key to survival. Often times battles require patience and a bit of planning as enemies lay in wait off screen, indicated by highlighted exclamation point.

Knowing when to launch an attack that can damage a row vs one that isolates an individual or a column becomes increasingly important as the enemies grow in power. Additionally, defense is handled by the all to familiar dice roll behind the scenes, but players have the ability to press a face button (corresponding to each character) in order to put up an extra defense against incoming attacks. Along your journey, the ragtag group will encounter non-playable assist characters who can join in the battle. While initially exciting, the mechanic soon wore out its welcome as it became very apparent that this was not a fully fleshed out idea. Assist characters sit in the back and are not attacked. Instead after each turn they gain SP that fills a meter. Similarly, the playable characters do the same, with the results being a super attack capable of wiping a screen clear of danger. Again, while useful, it could have included the ability to train or level up your assist characters to offer a more well rounded approach to battles as you level up.

Leveling is one place TTL absolutely nailed it. The power flow board allows you to use loot obtained in the world (because it is useless otherwise) to manipulate a grid system similar to a game like Pipes or flow. You must connect power sources to new abilities by finding paths to them but also not blocking yourself from branching off in other directions. These same items are also used to level up base attacks, individual weapons in the case of Rik, and even the potency of the elemental breathe for Tox. 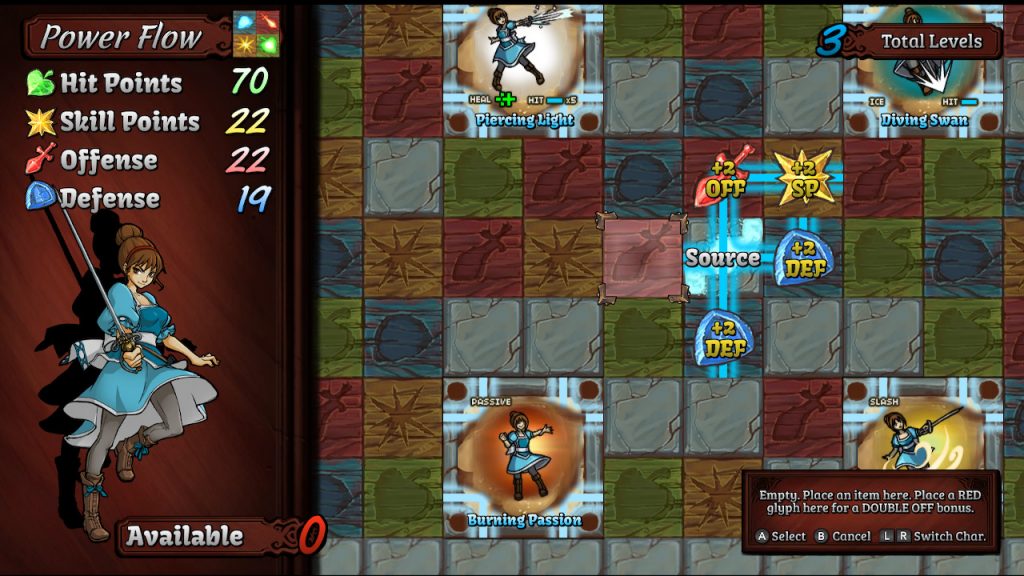 Visually achieved through the choice of a retro-inspired 32bit (Better than the ill-fated 32X) pixel art style. The characters have been created and fit quite well in this fantastical world inhabited by walking, talking Draconmages and archers that would give Hawkeye a run for his money. Unfortunately, the world itself isn’t up to the same level. The world ultimately looks and feels devoid of any real character. While not empty, towns feel more like a safe area to collect quests and hone your card playing skills. The character card art leaps off the screen, with finely detailed artwork bringing each of the playable characters to life as you navigate one of the many sub-menus associated with each character. Thankfully menu navigation is crisp, responsive and above all else easy to follow. This is also the case for the games platforming sections. 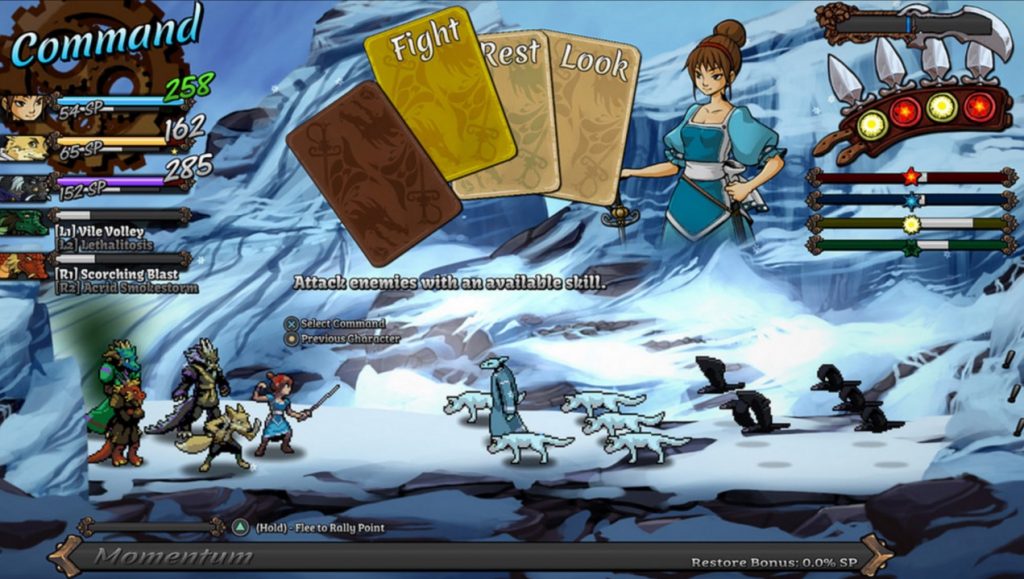 Audio-wise, TTL, is mixed bag. The music has its moments with some catchy tunes that while whimsical also have some depth to them with subtle instrumentation that harkens back to some epic RPGs of old. On the other hand you’d be hard pressed to find anyone scrambling to turn anything presented here into their ringtone. In game SFX are adequate and neither enhance nor detract from the game. Post fight quips are handled with handful of spoken dialog which breaks up the reading associated with classic RPGs. 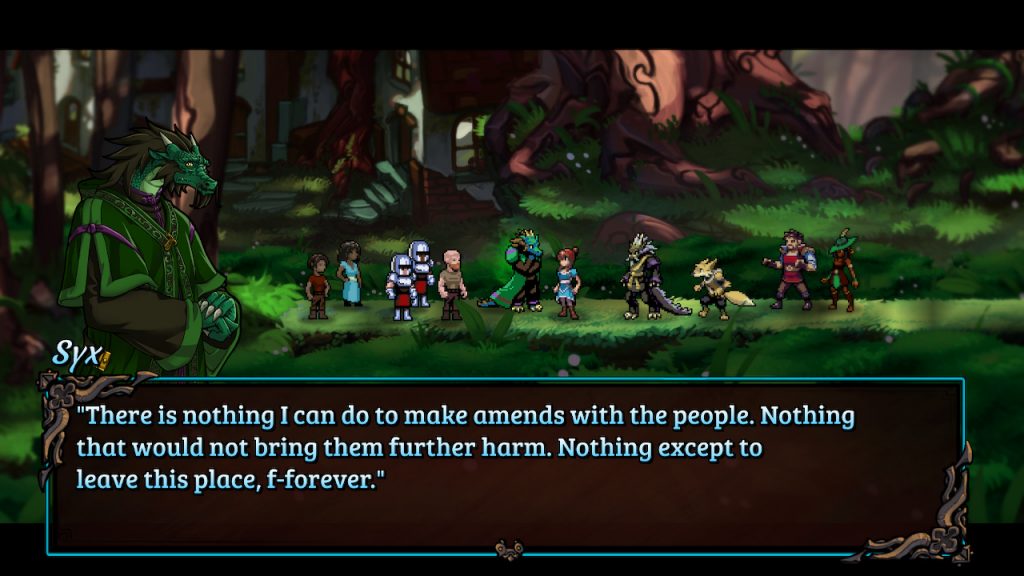 While not breaking any new ground, The Tenth Line finds itself in an interesting spot. On paper this is a decent old school RPG. The story follows the familiar tropes of: racism, class-ism, friendship and loyalty but doesn’t strike out in any real new directions. The core mechanics work well and there is a decent time to be had.

If you enjoyed this review check out our review of The Bard’s Tale 4 HERE!

Undead Darlings ~no cure for love~