The story in ‘The Mims Beginning’ is about a strange race of aliens known as Mims who have to evacuate their home planet into two giant freighters.  One of the ships is carrying a relic of immense power called the DNA ORB. A device that has the power to restore life on a single planet.After flying from their planet, the Mim’s ships gets stuck in the middle of a meteorite shower which causes massive amounts of damage to each ship, leaving them dead in the water.
Luckily for the Mims, they somehow manage to reach a strange planet full of floating islands. Unluckily for them, their ships are out of commission and they just realised that their legendary DNA Orb has gone missing! 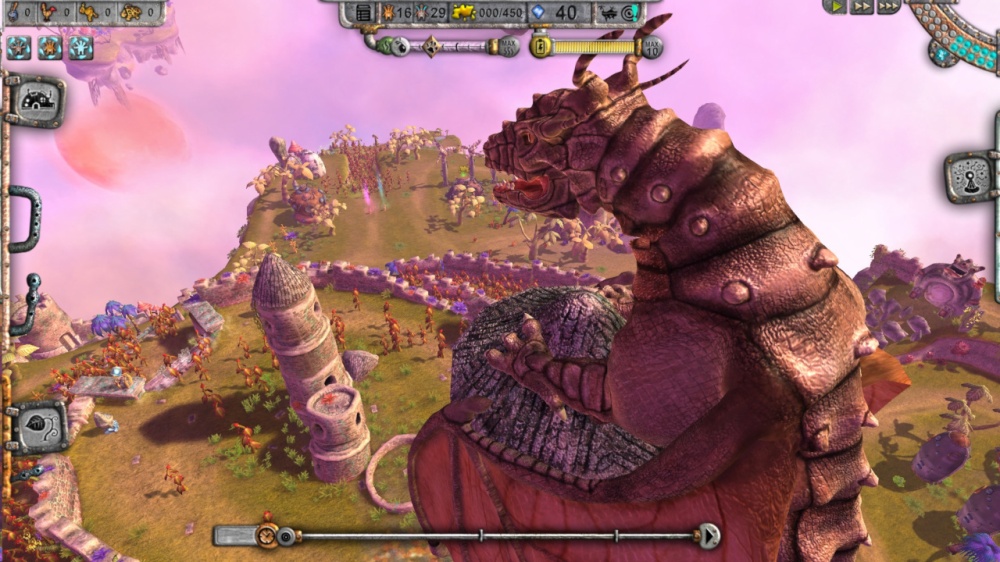 The Mims beginning is a God-like strategy game where you control the titular group of aliens; building them structures, creating livestock and using PSI powers to assist them in their daily lives. There are 3 main resources which you can cultivate for your Mims. Creating livestock in your labs allows you, once they have reached adulthood, to sell them in the space market which will net you blue gems; one of the main currencies in the game that allow you to build stuff and upgrade structures.
Another one of the resources is PSI energy that slowly regenerates through a massive tower, acts like your main hub. PSI energy allows you to use your unique powers, which is located on the right-hand tab. Here you can use 15 powers which gradually unlocks as you progress through the story.
The last resource is biomass, which you can accumulate by harvesting plants and throwing them into an extractor, then be stored in silos. Using biomass and blue gems will allow you to create new species to farm and then sell at space market. Each creature you create will feed on different types of fruit that you’ve created or planted. Once that creature has entered adulthood, they can be sold at the space market in exchange for more gems.
This is the basic cycle of the Mims Beginning; create biomass, earn gems, create livestock to sell and use your unique PSI powers to attack or help your Mims to grow their settlements. I found the progression a bit too slow for my liking when starting off and there was little to much information to take in.
As you construct new buildings for your Mims to use and create new plant and animal life to extract and sell;  there is a risk that these will attract pests and predators. This is where you can use your PSI energy and take down enemies with a few cosmic abilities or use brute force by allowing your soldiers to do dirty work… if they don’t run away first though. The story moves slowly after completing a series of missions that see you building certain structures and defeating certain threats and completing some secondary objectives. While I wasn’t hugely taken with the story, I enjoyed building and taking the necessary steps to create a more secure environment for my Mims.
There are some minor issues I found when playing the game. The building interface was a little chunky to use, and the descriptions were rather small and difficult to read. Also, trying to order a group of soldiers Mims to assist with an invasion on your base proved to be really frustrating. As most of the time when I sent my soldiers into battle they would become overwhelmed far too easily and ran away scared. This made the task of protecting workers needlessly frustrating.
Also during the main story missions there wasn’t a lot of space and time to build structures as some of the maps are quite cramped with trees and other objects; which isn’t a problem at first glance but once I realised that all my structures needed a large amount of space to build them it soon became an issue.
There is another mode available which I found I had a lot more freedom with. In the survival mode,  you can change a wealth of options which does away with a lot of constraints I found in the main game, which I really liked a lot. Sadly, most maps are locked until you’ve played them in story mode, which is a shame. I suppose it offers some unlockable content replay value. 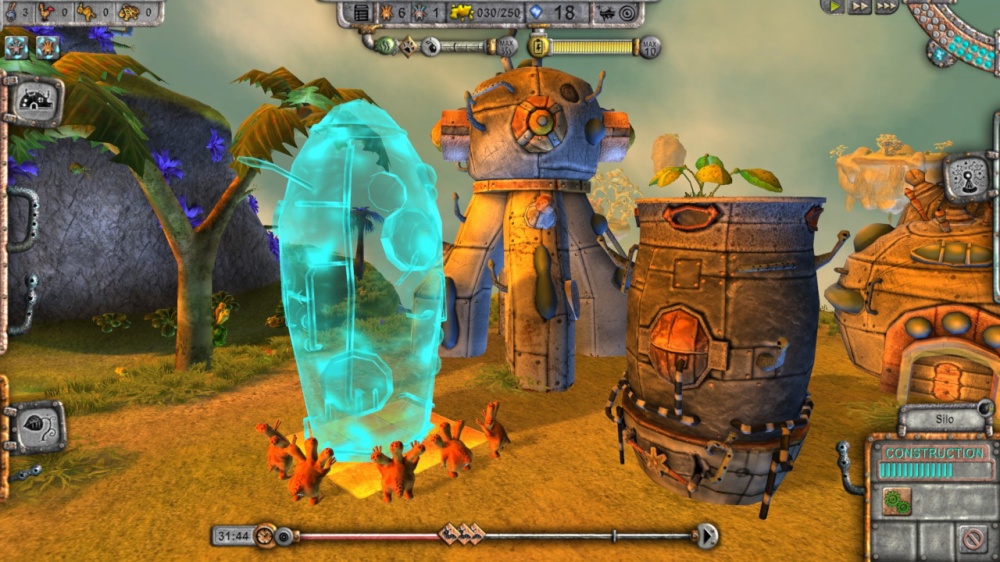 The graphics in the Mims beginning is a mixed bag. On one hand, some of the floating islands look real nice, I like weather effects and the little animations of the Mims walking around… Plus some of the structures you can build have moving parts like the space port which looks cool when lifting off the platform and delivering goods back to your base… however I noticed few moments were my Mims would become stuck on parts of scenery, structures, in these instances I noticed few laggy moments however it didn’t happen all time. 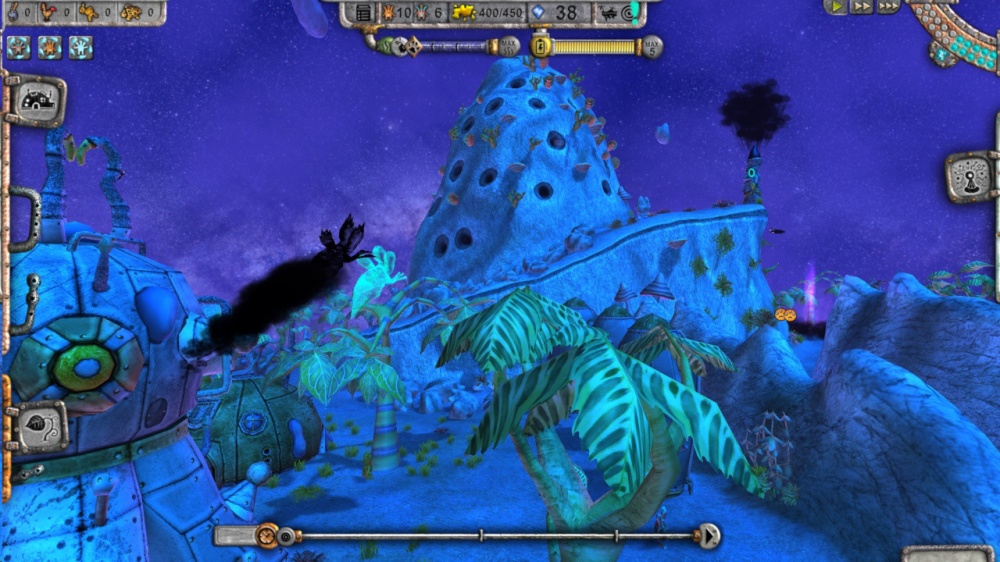 Music is relaxing, there are some ambient noises to which fits the game overall. 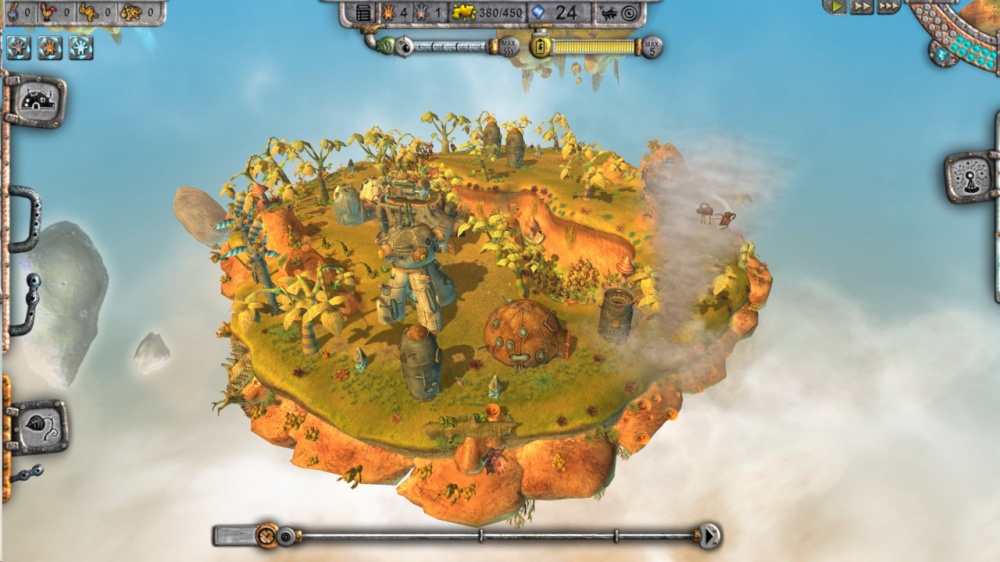 I like the Mims Beginning on the Switch, I feel like there was definitely snippets of potential here but the clunky interface, repetitive and often grindy cycle of building, farming biomass and gems grew stale after a while. Trying to attack enemies with your forces who actually ran away instead of attacking became quite frustrating for me. I liked the survival mode though and some story missions were quite challenging; it’s just not as refined as other building or god like sims.

If you want more aliens check out our review of Alien Isolation HERE!