The story in The Alliance Alive revolves around a small band of rebels that want to get rid of the ruling Daemons. The Daemons came to the world years ago and blocked out the sun. They also took dominion over the humans, making them the bottom of the food chain. Now humans are looked upon by the other races as useless and nothing more than a hindrance.

The game starts with Galil and Azura on aquest to see a blue sky. When Azura gazed upon a forbidden painting of the sky, it cemented her desire to see a blue sky. However in turn, she did lose her eyesight. Azuna can see using magic and Galil has sworn to protect her and lift her curse. They are not the only characters on the journey, the writers did a great job in introducing each character and getting the player to understand the motivation of each. This was done by playing the game from the different points of view of each of the characters.

The story had me hooked from the get-go, and didn’t let go till the end. The writing is fantastic. 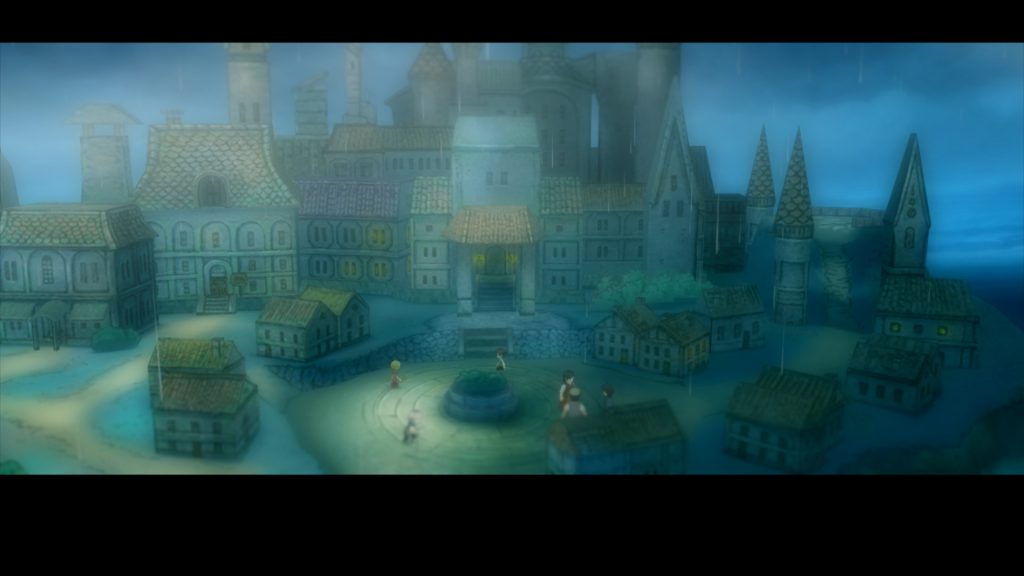 Let us get to the nitty-gritty of The Alliance Alive gameplay. It is a JRPG, I am not going to tell you how a JRPG game works in terms of the battle system and world map. I am going to concentrate more on the different aspects of the game that make The Alliance Alive HD stand out.

As I said, we will not go over the battle system in detail but here is a bit on it or more so on the Awaken system. While you go around the world, fighting all the daemons you walk into, after a set amount of attacks your characters will unlock new Skills within a battle. These Skills are tied to the current weapon the character is using. I found this to be a refreshing change to get a new Skill and be able to use it right away in a fight. On the topic of weapons, these can be swapped on the fly when it is the character’s turn, as well as unarmed attacks. This gives the battle system some depth and keeps the player using each weapon, so in the latter part of the game, the team is not under powered. As the enemies will have better defense over certain weapon types so you will need to switch them out, but if you have not been leveling the other weapons there will be no skills strong enough to take them down before they destroy your party.

While fighting your way through the game, you will earn Talent Points. The talents are general abilities, traversal abilities, unarmed attacks, spells, sigils, and weapons such as staff, sword, bow, great-sword, shield, spear, axe, and cannon. Talent Points do take a while to amass so be prepared for grinding if you want to unlock everything. Most of the unlockable talents improve aspects of the characters development, for example, learn new skills quicker.

A party consists of five members and the formation that has been picked, will add a buff to the party. For instance, an increase in healing effects, defense or attack boosts etc. This gives a pause for thought in new areas, especially if the party is under-leveled. Picking the right formation will help survive the more difficult areas.

Along with formation, you will happen upon different guilds in the game. Once you enter and talk to the guild master, the current guild will give the party a buff while in range. For example, the Smithing guild may provide an extra attack at the start of a battle. They also allow for resting and have a shop. As the game progresses, guilds become vital to succeed because you can recruit new members adding battle skills. There is also the ability to place guild towers to help out in the tougher areas of the game. This was the most stand out mechanic in the game.

Okay, I will give you a mechanic not tied to the battle system, and it is a reasonably fun one especially for JRPG fans. There are multiple traversal methods. Not just a boat and an airship. We have a duck with a rubber ring that can walk through lava, a wyvern, and a snow rabbit to name a few. Each of the vehicles will allow traversal of the varrying area to give some replayability to the game.

Overall, The Alliance Alive takes everything we love about JRPGs and adds a bit of its own flair to them. For fans of RPGs, in general, you will like how the game plays and feels. 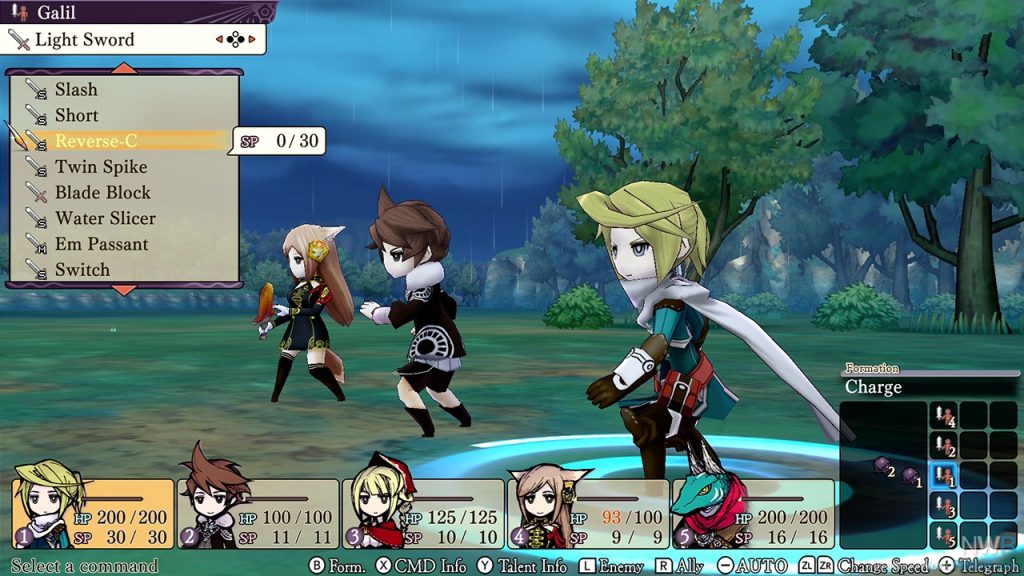 The Alliance Alive is stunning from its original 3DS inception to its new HD Remaster. The Remaster is one of the better ones we have seen in a while. As shown in the comparison picture below (left side is the 3DS version, right side is the HD remaster) the developers over at FuRyu clearly put a lot of effort in making this look stunning. Everything looks much better, more detail, more colour and definition.

The game played perfectly with no bugs on my playthrough of this title. 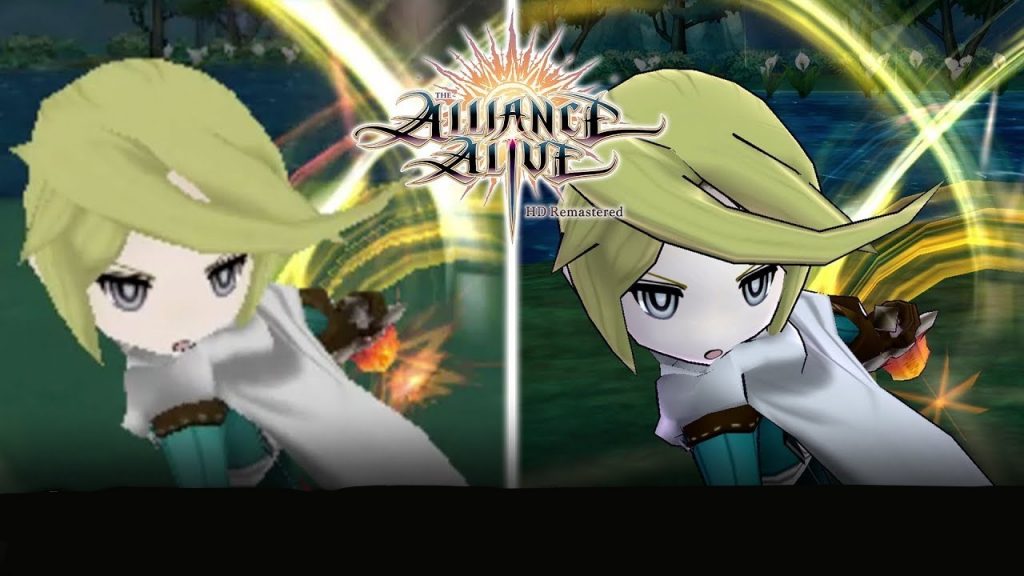 The same that was stated before with the graphics, also applies to the music. The Alliance Alive has been drastically improved audio-wise and sound effects are clearer crisper and more dynamic than on the 3DS.

The soundtrack is outstanding, with the sound effects being a little on the simple side but do a good job none the less. There is no voice acting, this is not an important point, but it could have made the Remaster even better. Personally, I love to make up my own accents and voice for characters anyway. 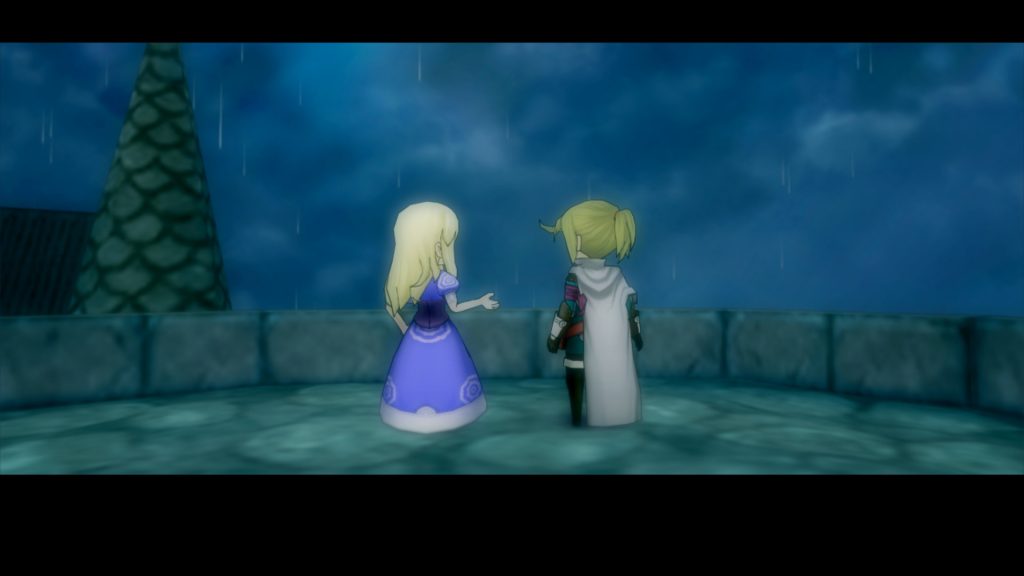 This one is a no brainer. If you are looking for a great story, good individual characters, with interesting mechanics and it has to be a JRPG, then The Alliance Alive HD Remaster is a must buy. It is easily one of the best remasters with good quality of life additions, how could any RPG fan say no?

I would recommend this game for any and all fans of JRPGs, there is plenty to keep you entertained and the story alone is fantastic.