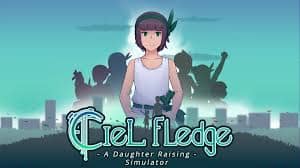 In the year 3716, humanity lives under constant risk of ruin from a colossal alien threat known as “GIGANT”. Fleeing its destruction, a mysterious young girl arrives on ARK-3, a magnificent city built in the sky. Ciel Fledge is a game about raising an adopted daughter in a future world that still has hope. Featuring compelling management gameplay and a loveable cast of characters, it’s up to you to take care of Ciel until she reaches adulthood and becomes ready to fledge the nest.