It’s no secret that there is a dearth of racing titles in the same vein as Need for Speed available for the Switch. Need for Speed: Underground and Burnout were personal favourites of mines; I played both on my Gamecube and absolutely loved it. In my opinion, with the exception of Burnout Paradise, no other games that came after has lived up to the two originals. So along comes Super Street: Racer to play up to my nostalgic feels and try to take me back to those heady days of pretending I was Vin Diesel, tuning up my car with all the mods available and racing dangerously; using the nitro boost with a devil may care attitude.

Super Street: Racer is the Nintendo Switch version of Super Street: The Game (available on the PS4, Xbox and PC). An arcade racer/tuner car sim that takes its name and licence from the Super Street Network, a popular media brand that covers Import street racing, Drifting videos, import and tuner car models etc…you get the gist. 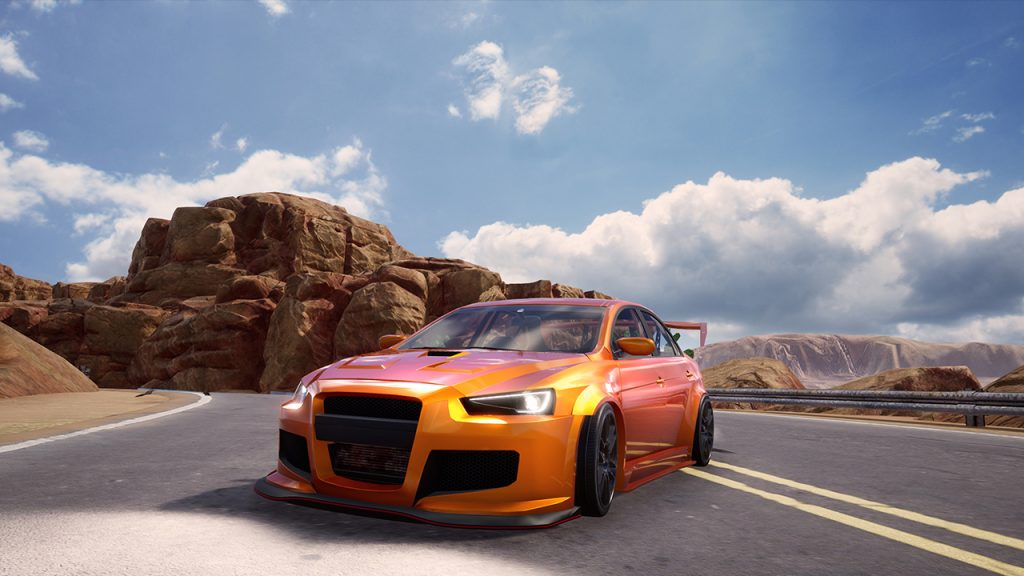 The beginning of the game has you choose the difficulty setting at first(medium for me) and then gives you the option to have a tutorial race. Super Street: Racer takes a lot of inspiration from both NFS: Underground and Burnout gameplay-wise. The arcade-style races are fun, and the use of nitro boosts adds some more excitement to the chaos. It can feel a little bit like destruction derby at times as using takedown moves on rivals takes precedence over skilful manoeuvring, especially with your starter stats. Nitro can be refilled with moves like drifting, which seems easy enough but there’s also an element of strategy as some tracks are designed with long stretches, making you use your boost to either gain advantage or catch up. After the tutorial race, you start your career by picking your first car from a selection of 8 available (unfortunately unlicensed but based on real-life models) in a dodgy-looking car dealership. The onus at the beginning of the game is to take your first piece of junk car, tune/modify it and rise to the top of the Street/Import car racing scene. There is an impressive amount of parts within the car that you can mod that it’s a shame that the amount of options available for each part are a little bit limited.

Of course, each mod requires cash and these can be earned through participating in Events with each one consisting of a number of different races. The races themselves vary from the usual Circuit(usually 3 laps around a track) to the more interesting Eliminator. The aforementioned Eliminator has you racing around a circuit, with a timer in each round ticking down; if you are in last place when the timer runs out for the round, you are out of the race. Par for the course in this age of Battle Royale games, in my opinion.

Events are categorised depending on your level of experience and more can be unlocked by earning enough XP from doing the races and finishing in the top 3 places. My gripe with the game is that you can only earn cash and XP if you place in the top 3 coupled with an inconsistent reward system. For example, it says what you may potentially earn if you finish in each place and also earn bonus XP and cash from doing extra things while racing (driving dangerously, doing airtime etc). But the value can also decrease, and it’s not always clear why. I’ve won races where I’m expecting a good bit of cash prize, only to be left disappointed with what I’ve actually got. I’ve figured that prize values drop if you finish at a lower place and then start the race again, but to me, it makes no sense. It adds an unwanted element of grind to the game and adds frustration, especially if the race was hard-won. 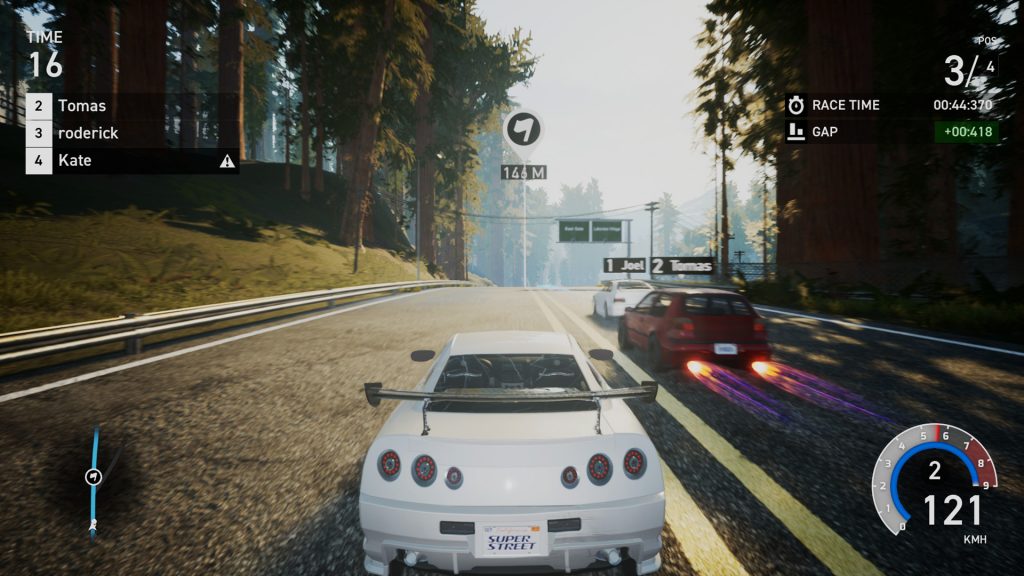 Visually, Super Street: Racer is a bit of a disappointment. Graphically, it looks outdated, almost comparable to last-gen quality. Both handheld and docked have a modicum of difference. The races are pretty smooth though with the frame rate keeping a stable pace throughout even when there are lots of going one around you. Real-time car damage during races are there but only as a cosmetic aesthetic as it makes no difference to your car’s performance; however, banged up it looks. In fact, there’s a dedicated button (Y) to respawn your car to get it back to the race in pristine condition. Track designs are simple, with nothing standing out, which again is disappointing.
Another niggle for me is the lack of driver model during races. You can see through your car, but there’s no driver which makes the game lack character in my opinion. 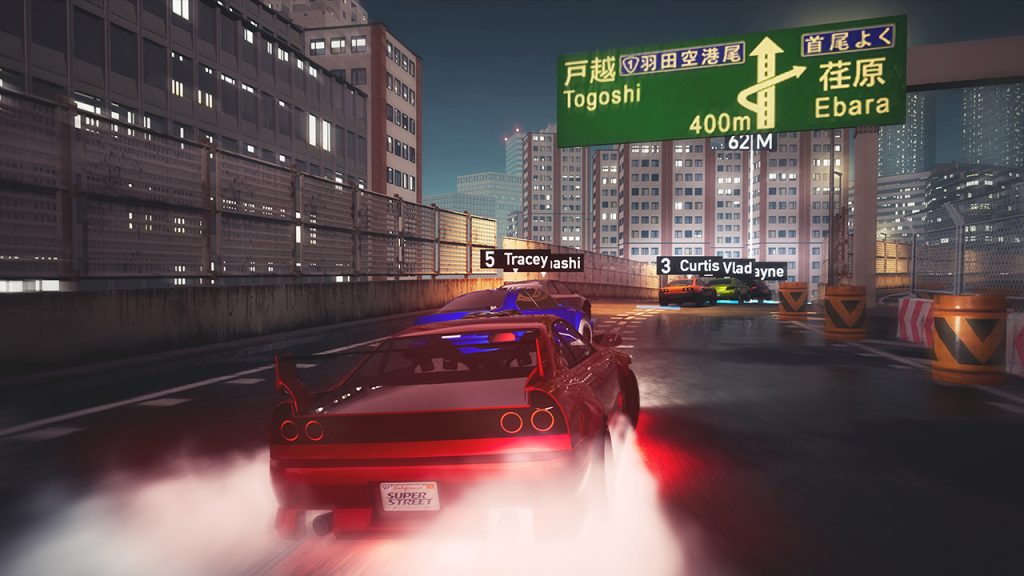 Car sounds during races are your basic vroom vrooms and tire screeches during drifts. Be ready to hear the sound of metal clashing as crashes will be your staple sound, especially at the start of your career. The soundtrack is pretty good, though. I’m not the biggest fan of techno, but the tunes available are enjoyable enough to listen. There’s one particular song that I really like which always gets the adrenaline pumping during the race. 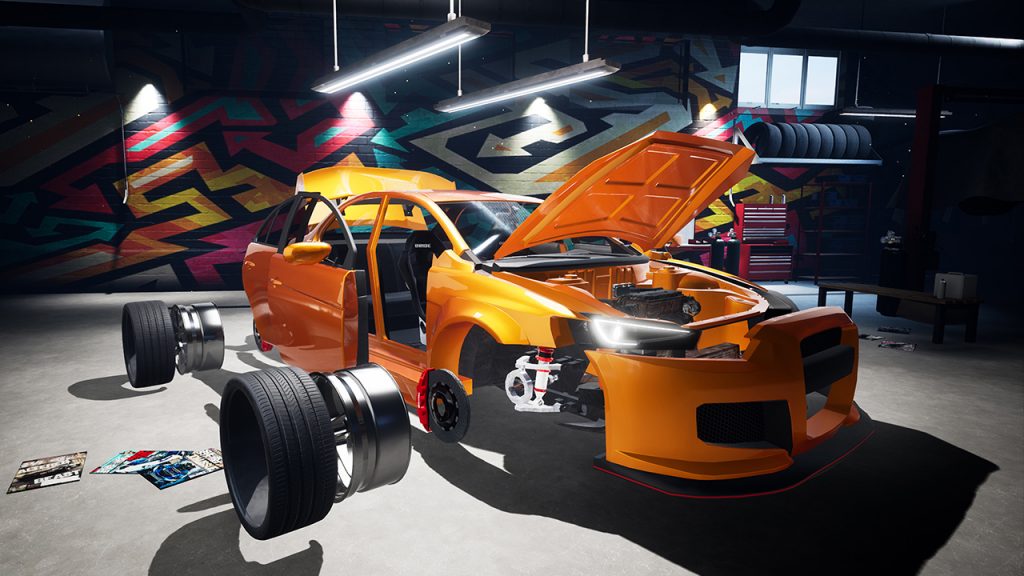 Super Street: Racer overall is an adequate arcade racer/tuner car sim that’s available for your Nintendo Switch. It fills that NFS: Underground/Burnout shaped hole in the Switch’s library. The races are fun and can sometimes feel like Destruction Derby at times, but that’s not necessarily a bad thing. The career mode can feel a little grindy with its inconsistent reward system but modding your car is always fun. Sadly, the visuals are slightly outdated, considering the current-gen and when comparing it to other racers available. It also lacks a bit of character with some of its graphical omissions. I enjoyed the game despite its flaws and would recommend it if you enjoyed NFS: Underground or Burnout.

If you Enjoyed this check out our review of Hardcore Mecha for something a little different HERE!