As a massive JRPG fan; it was not long before I was introduced to the weird and wonderful world of Gamindustri, and out protagonist Neptune. When I played my first Hyperdimension Neptunia game, I instantly fell in love with the world and the characters as well as the mechanics, and I have played each instalment of this series. I was interested to see how Super Neptunia RPG stands up to it predecessors.

Set in a 2D version of Gamindustri, where 2D games rule supreme. An evil organisation called Bombyx Mori, makes the citizens produce 2D games as an offering to the ‘leader.’ If anyone is caught using new technology or if their games are not up to a high quality, they are banished to the Trail Grounds to not only be executed but have their soul crushed.

Awaking in a bed, Neptune has no recollection of who she is or where she is from, after realising she is strong and the “Protagonist!” She sets off on an adventure in this 2D world along with some familiar faces and a Book. What is the worst that could happen? 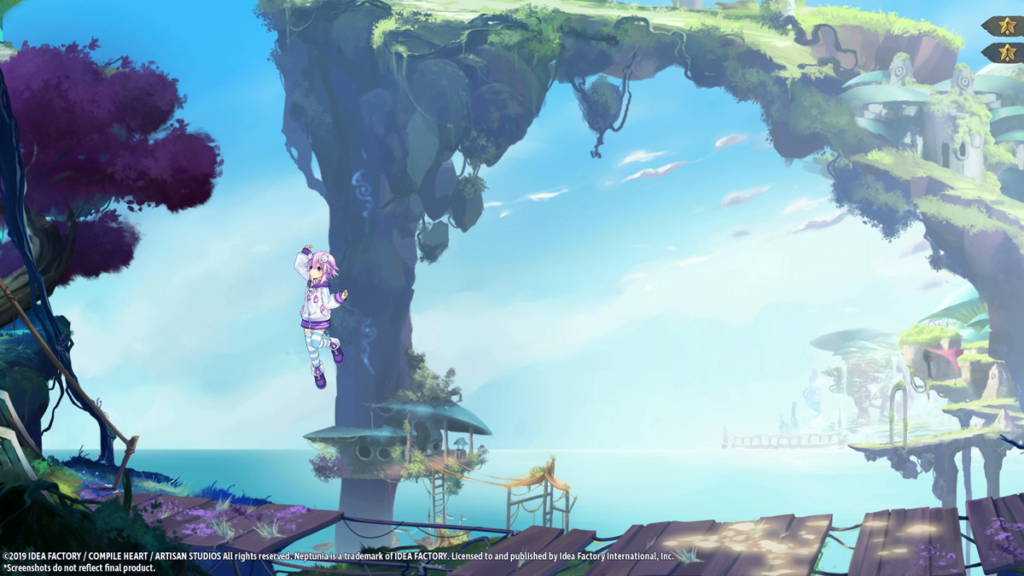 The biggest and most striking difference to this revamping of the Neptunia series is the change from 3D to 2D. It leads to the game having a more platformer feel to it, including a dash button for platforming sections. It’s an interesting change, and does make some level sections feel shorter then in the other games. I liked this for a change, wouldn’t want it for all the games but for a change its great. While traversing this beautiful world enemies will be visible. Battles start by running or walking in to a enemy, or if an enemy charges you. If you’re hit from behind it’s a surprise attack and will take you longer to amass Action Points (AP) and which in turn will delay any attacks you can make. Although, you’ll also be able to spring surprise attacks earning you bonus AP to start giving a first attack. Pretty standard RPG stuff.

The battle system itself, has made a couple of changes to the normal Active Time Battle (ATB) system. Instead of each character having their own time bar the whole group shares one AP bar, and depending on what type of attack is chosen will depend on the amount of points needed. For instance, a normal attack will cost two AP but a magic attack will cost three AP – there is no Mana for magic attacks. While waiting the AP bar will slowly rise from 1 to 12 (if you leave it long enough – not a good idea!). Along with natural growth of AP during battle, if a character gets a critical attack, say hitting a enemies weakness, there will be a boost of AP. For critcal example, if you spent two AP, you will get two AP back plus a bonus two AP for the attack. Making sure you find out the enemies weakness is the key to winning the harder battles.

Along with the AP change to the battle system there’s a formation swap. This allows up to three different attacks that have to be picked before hand from the menu screen. Switching characters is a simple L or R press. Doing so will change the attack the character can do dependant depending if they are front, middle or back of the group. Being limited to 3 attacks each will not be to everyone’s taste and I found it hard to get to grips with.

Pressing the touchpad while in a fight will show the enemies stats like; HP, weaknesses, what they’re strong against and what they absorb. Dependant on the weapons equipped and the abilities used the fights can be easy or hard and it’s all down to knowing what the enemies are like in a given area. Generally the local weapon shops sells the equipment needed for that area. So as long as you have the money staying alive is a simple task.

Along with basic attacks and magic, there are abilities that can be equipped. Each ability has a cost and an opposing ability. So if you equip one ability another ability will be blanked out so not to make the characters too overpowered. Attacks and abilities are both learnt from equipping different weapons and armour. At the end of each fight the team is awarded points that go to learning abilities.

After these changes it is basically the same as the other games of the series, equip weapons armour and accessories, level up get stronger, complete side missions and so on. Super Neptunina RPG does not to too much extra to break the JRPG mould. What it does it does well. It was enough to entertain me and keep me playing until the end. 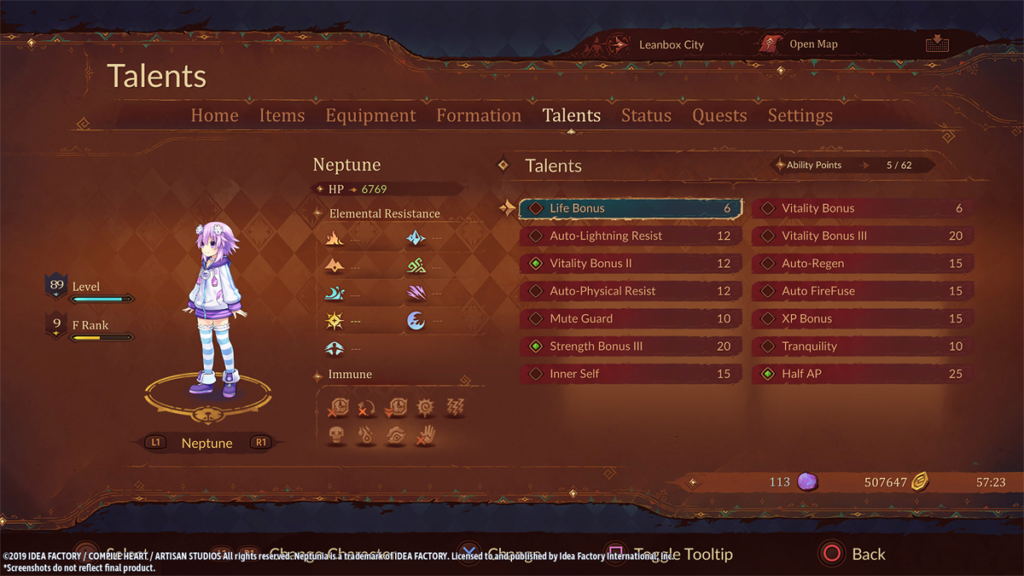 Visually Super Neptunia RPG is stunning, from its well-crafted world – to the different art styles used within the game. The backgrounds within each area are stunning, giving a sense of wonder and awe. Neptune herself as well as her friends all looks great and highly detailed for being in 2D. The anime style drawings are back and look lovely and well crafted. There are the Chibi sections where the detail is nowhere as in depth but does look super cute.

When it comes to the performances the game runs smooth and played well on the PS4 PRO. There’s no noticeable slowdown in the game and has short load times between areas. It is, however, a JRPG, so it is hardly going to be pushing the system. Overall a stellar performance. 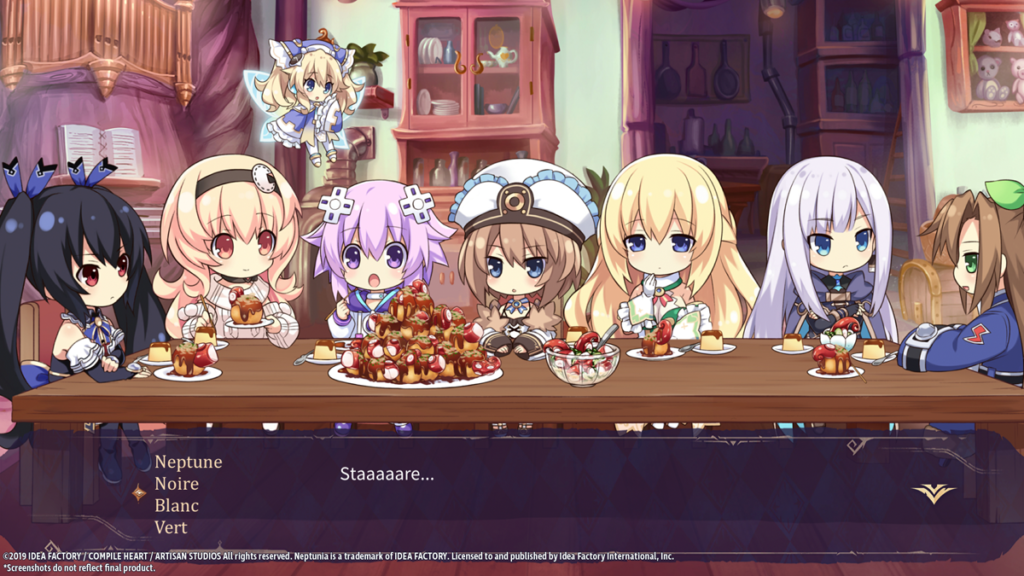 The soundtrack is a light playful with a somewhat silly feeling mix of melodies, more so when Neptune speaks. It is, however, what makes the soundtrack enjoyable. It mixes well with not just the events on screen but also with the individual characters themselves. Unfortunately for the soundtrack, it’s not something I would listen to outside of the game as works better within the game.

Super Neptunia RPG is fully voiced it both Japanese and in English. Both of which is performed well, and I did prefer the English Dub for this one, always liked the way Neptune sounds.

The sound effects are again decent, with the magic taking centre stage for grandeur and power. The general sound design with all effects in the game were really good. Every sound serving its purpose to the letter. 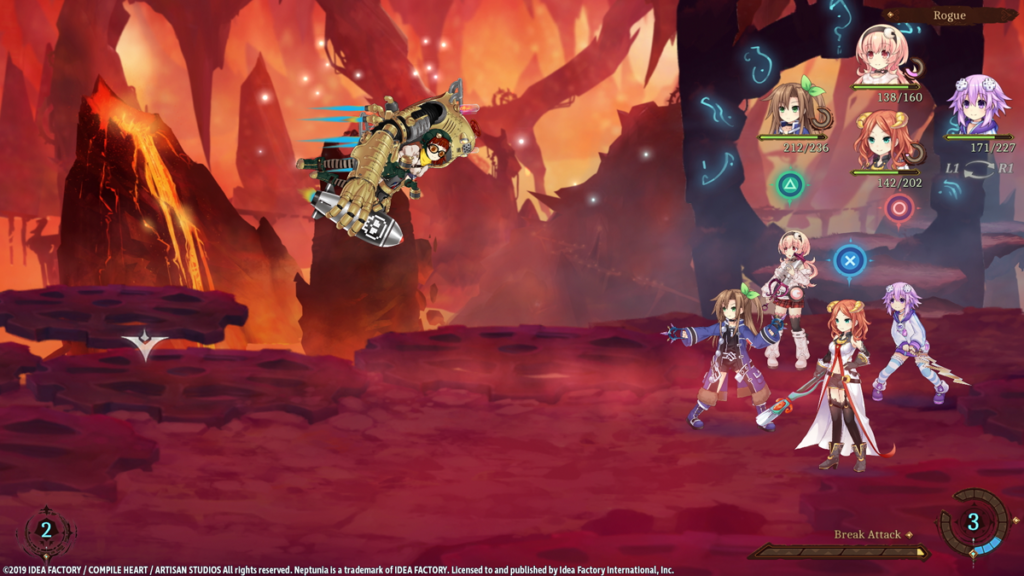 Super Neptune RPG is a decent enough JRPG, that has tried to mix it up a bit from the original formula. It just doesn’t do anything new or groundbreaking. It’s definitely a good game and had some laugh out loud moments.
If you are like me, a massive fan of the series then get it. But, you it’s JRPG’s you’re looking for, there’s plenty out there to keep you occupied until you get it on sale. It does not mean it is a bad game; there is just better out there.