I have to start with the box opening for Super Motherload has been deleted off my console so unfortunately you are left with the game trailer. I am sorry.

The Solarus Corporation discovered an infinite source of rare and precious minerals deep in the red crust. Resources that will end the energy crisis on Earth and fuel the deep space expeditions planned as populations swells beyond capacity.

You have been chosen to lead an elite crew of Pod pilots who will delve below the surface of Mars in Solarus Corporation’s first major drilling expedition. As part of this maiden voyage, the corporation has agreed to let you reinvest any profit you earn back into training your Pod pilots, increasing their skills and efficiency. Will you be remembered as the greatest Solarus Corporation employee in the galaxy?

Super Motherload is a deck-building game; where you begin with a basic set of cards and build towards more advance cards. Throughout the game, you will get new and more powerful cards. As you drill and blow your way to the precious minerals and collect them, you will then use these minerals to buy better cards allowing for better bonuses. With each card purchased, you gain Victory Points (VP), whoever at the end of the game has the most VP is the winner. 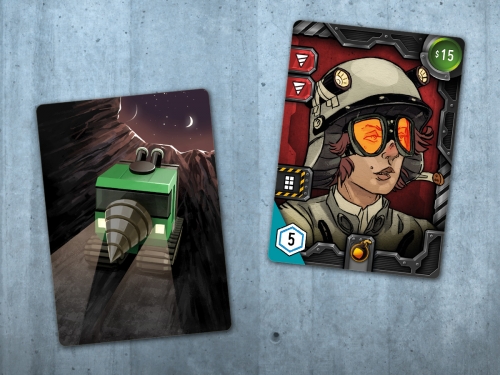 So here I was mining the red crust on the verge of getting some minerals to buy my a Birdman, and get some more VP, and get closer to that last artifact. Feeling confident with how I was playing and not paying any attention to what my wife was doing, we get to the last artifact then it was game over. We count out VP points, and my wife had destroyed me. Let me tell you, she is not letting me live this one down; also I let her win (I didn’t at all, but I will tell her that).

The Super Motherload rule booklet is only twelve pages long, with an easy to follow and understanding set of rules, that do not bog the player down or slow down gameplay speed. Along with the easy to follow rules, there are well-presented accompanying pictures of each aspect of the rules. This is great for a quick reference to how to place a tile and if it is allowed to be where you want it. The rule book has a handy guide at the back for any bonuses that cards might have once purchased, along with references for actions and terrain. This is helpful with 27 different symbols to remember. The rule book is excellent colourful, easy to use rules and guides.

The set up comes in two areas Game and Player.

Game Setup
-Place depth one board in the middle of the table.
-Place Mineral, tunnel, artifacts, bomb cards close to the board.
-Pick three Major Achievement cards out of the ten faced up.
-Rest of the board close by.
-Players pick one of four decks Purple, green, orange and grey.

Player Setup
-Remove and shuffle the seven starting Pilot Cards and place them face down, this is the Draw Deck, and leave space for a discard pile.
-Take a bomb
-The reminding Pilots Cards sort into four stacks according to the drill colour, and put into ascending cost order. Them place in a row on top of the player area.
-Draw four cards from the Draw Deck.

The gameplay flow is simple from the starting player, move around clockwise taking turns until the end of the game. Each turn a player performs two actions from -it is possible to use the same action twice-
Draw – Draw two cards from the Draw Deck. If there are no more cards in the Draw deck, take the discarded pile and shuffle them and use these cards.
Drill – If the player decided to drill, then, they can use as many matching coloured drill cards as they like. Take a tunnel card that will cover the same amount of block as drill cards use. Place them in a straight line and collect any minerals or items where the tunnel is placed.
Bomb – Works the same as a drill card except only certain Pilot cards can use them. With that said, a Bomb is needed to use this action. Depending on the bomb, shape on the card will depend on where the tunnels are placed. For example, three squares up and one across.

Once the two actions are completed, the player will now get a chance to buy a new card as long as they have enough mineral to cover the cost of the cards. Both the value of the minerals and the card cost are displayed in the top left of each one. If the value on the minerals meets or exceeds the card cost, it can be bought. If the card has an additional action (displayed on the bottom of the card), it can be triggered as soon as the card is purchased. An example would be if the card shows a bomb, you will take a bomb from the pile and add it to your supply. Once this is done, it is on to the next person.

The game ends when all the last artifact have been collected on game board four. How do we get to game board four? Once all the artefacts on the top game board are collected, the player to collect the last one will place the next highest game board directly under the top one, each board is double-sided, and the player can pick either side. Only two game bored are in play at one time, so once the next has its artifacts collected that player removes the top board and places the tunnels back in the piles and puts the next board underneath, until board four, where the game will end once its last artifact is collected.

Once the game has ended the player with the most VP is the winner. There are three ways to gain VP, firstly each card that is purchased is worth VP. The amount is displayed in the bottom left of the Pilot Card. The next two are the achievement cards I mentioned in the game set up. These cards reward players for doing specified actions in-game. Minor Achievements are performing specific actions, for example, drill a tunnel four squares long. Major Achievements are gained once a set number of cards have been bought. Once a player has performed the right actions, they take away the achievement card and place it face down next to them. Then after the game ends simply count up the points and the highest wins.

I know this looks like a lot, but it’s fairly simple to get your head round after a few turns. Overall once the game gets going, it is easy and straight forward. My wife found the gameplay easy to follow and had no problems within the game itself.

Game Overview:
Number of Players;
2-4
Game Time;
One Hour
Overall ease of the rules (on a scale of 1-5, 1 hard, 5 too easy)
4 – The rules are laid out in a way that they are easy to follow. With a handy reference sheet for the symbols on cards. 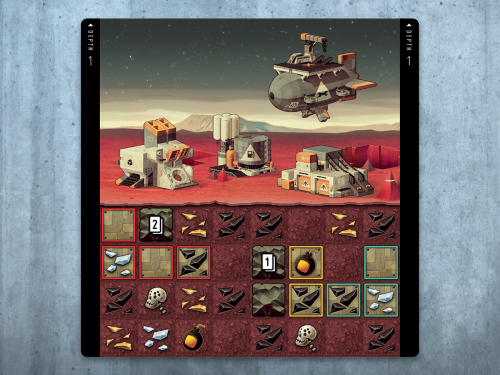 Rule Book – As discussed above a well-written rule and pictures that help to explain the rules.
Game Boards – 4 double-sided game boards, well crafted with different layouts of items.
122 Cards – The Pilot Cards as stunning with the hand drew Cell shaded style pictures that ooze the Borderland games charm. The cards are of excellent quality.
16 Bomb Tokens – Well made and had a bomb on both sides
16 Artefact Tokens – Each has a skull on a Martian of them and a symbol on the other side for gameplay, again well crafted.
76 Tunnel Tiles -Three different lengths 1, 2, and 3 squares long.
8 Mineral Tiles – six different denominations depending on the look of the tile. Well made and the pictures look good.
Lastly and most importantly, Roxley has supplied resealable bags to keep all the tokens together. For myself, this was the best part as I like everything packed together.

When written down like this, it can be a little overwhelming but once the game is set up, it does not look like that much, from how the game needs to be set up. 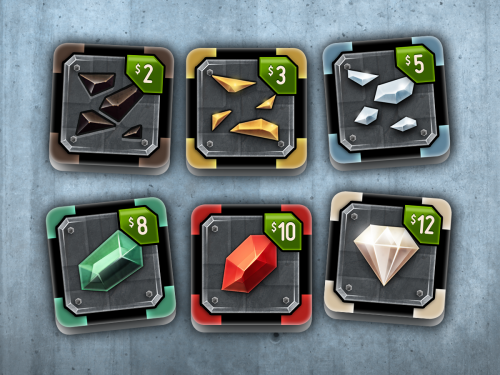 Super Motherload is a well thought out simple to pick up and play, board game that most people can get into. With its easy to follow rules and accompaning book that explain it well, makes life easy. The game is entertaining to play, and once the game gets going time will just fly by.

Super Motherload is an excellent game to play if you are new to board games or have not played many, as well as for the more experienced player. I would recommend this to most tabletop gamers. The game is well made and does not feel like it will fall apart on you with multiple playthroughs.

Overall, the easy to pick up and play nature of the game mixed with the well-designed gameplay loop will make this a hit with most tabletop players.

If you want more tabletop games check out our Crusader Kings Review HERE!