I saw Snack World on the 3DS over in Japan, and was like ‘This looks good, wonder if it will come to the West?’ It did eventually for the Switch, after which I found out it was a Level-5 developed game and I was instantly sold. I then found out that this was massive in Japan, with an anime and toy line and I knew I was in for something special. Weirdly, this was a stealth release by Nintendo. This takes nothing away from the fantastic game that it is, and this is one of Nintendo’s best unsung games. Now we are here to lift it up.

The overall story is fairly… very simple. After creating a character, they wake up in the central Kingdom of Tutti-Frutti. After your home town was destroyed with amnesia and set off on a food-filled adventure. That is basically it for the story.
Where Snack World shines is in the mission’s writing and the outlandish characters that you will meet along the way. There are some great moments to be had here. Do not let the cute style fool you because there are some adult style jokes and lines. 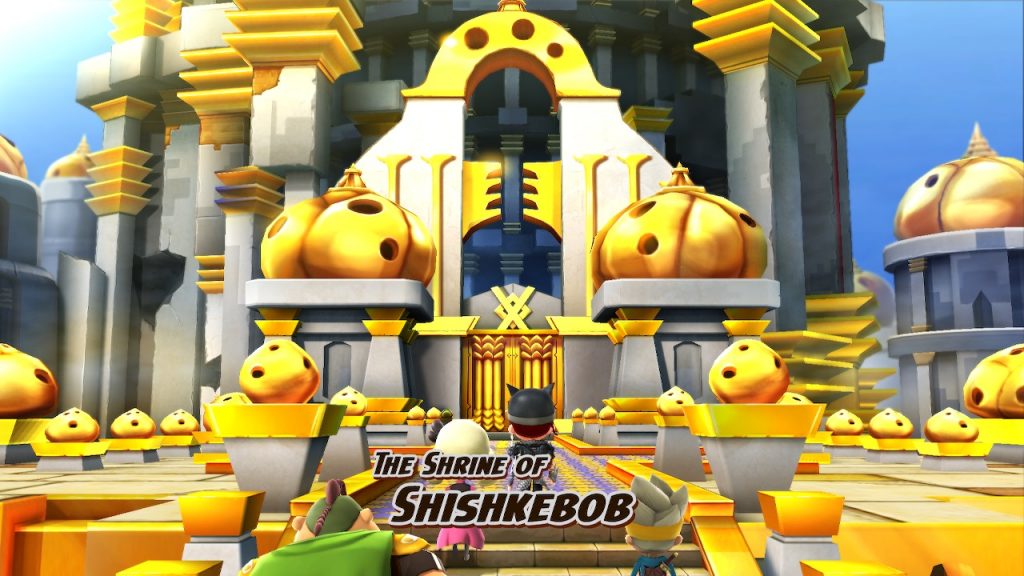 The gameplay loop in Snack World is simple, addictive and fun. With a MASSIVE helping of cuteness. As this is a dungeon-crawler, most of the game takes place in randomly generated dungeons. Tutti-Frutti acts as the main hub world where the king asks you and your new friends to go out to find things for his spoiled daughter. After that, it is a case of getting ready and moving out to the dungeons.
Tutti-Frutti has all the things for any adventure. It has a cafe, weapon store, clothing store, shopping-mart and even a fortune teller. Each of theses shops will be vital to help you and your friends move through the ever changing dungeons. After getting a quest and also unlocking side quests, it is as simple as pressing R and picking the mission you want to undertake. It will display there all the information needed to decided what mission to run. For example, enemy types, mission level, the mission brief and also how likely you are to succeed. Once the mission is picked, it is time to equip armour and items, then off to the dungeon.
There are several things to consider when deciding what to equip. First, the weapons you want, the items to along with the armour and snacks.
Weapons – Weapons or ‘Jara’ here come as a few classes: swords, knifes, bows, staffs, spears, shields, axe and hammers. Each with their own damage stats and perks banes (attack buffs) and passive boots (character buffs). For instance, faster attack speed. Jara are stronger against certain monsters than others. It is a good thing that you can carry six different Jara and can be swapped for the next one as easy as pressing RZ. The game gives a handy prompt to when you target an enemy and you have a Jara better for the Job.
Jara’s can be upgraded by combining the same weapon and other materials. Materials can be bought or found in dungeons.
Items – Along with the six Jara, two Items can be equipped a healing tonic and an aroma. Healing does what it says on the tin, heals the party as they cannot heal them self. Aroma gives your character a buff e.g. Attack and movement buff. They limit items to five turns per dungeon. Items do not need restocked for a store once you have them, you have it; it is also possible to restock at certain points in the dungeon
Gear – Gear are just three items, headwear, bodywear and accessory. Each item has a defence and magic defence rating along with Boons. Boons are buffs the character receives while wearing the item. Each gear item has a brand or no brand, and daily the game changes the style of choice. If the brand is worn as a style choice, then the rare drop rate will increase.
Gear can be bought or crafted.
Snacks – One thing the Snack World has going with it is there are 168 monster types. It is possible to capture all of these and equip them as either a Party Snack or a Pocket Snack. To capture a Snack, a circle will appear around the defeated monster, and it is a case of taping A when the circles align.
Party Snacks – These are the extra party member’s that the player can take with them and come in three classes: Attack, Defence and Heal.
Pocket Snacks – Are used as an ultimate attack, for instance, using a healer Snack will heal the party and might add a Regen effect. An attacker will do a powerful attack.
Once in the dungeon the game gets going, the controls are solid and tight. It is also simple with Y to attack, X to do a special and X+A to do the big weapon attack. The Snacks you take with you work autonomously and the AI is fairly competent. The enemies telegraph their attacks with visual clues. Everything just works.
This is the tip of the iceberg in this one. There is so much to offer, I just wanted to give you all a taste of this fantastic game. There is so much to do with great characters, loads of quests and great writing. Snack World is roughly 30 hours in length and it is one of the best 30 hours that you will spend in a game. I really wished that Nintendo pushed this more, it needs it. 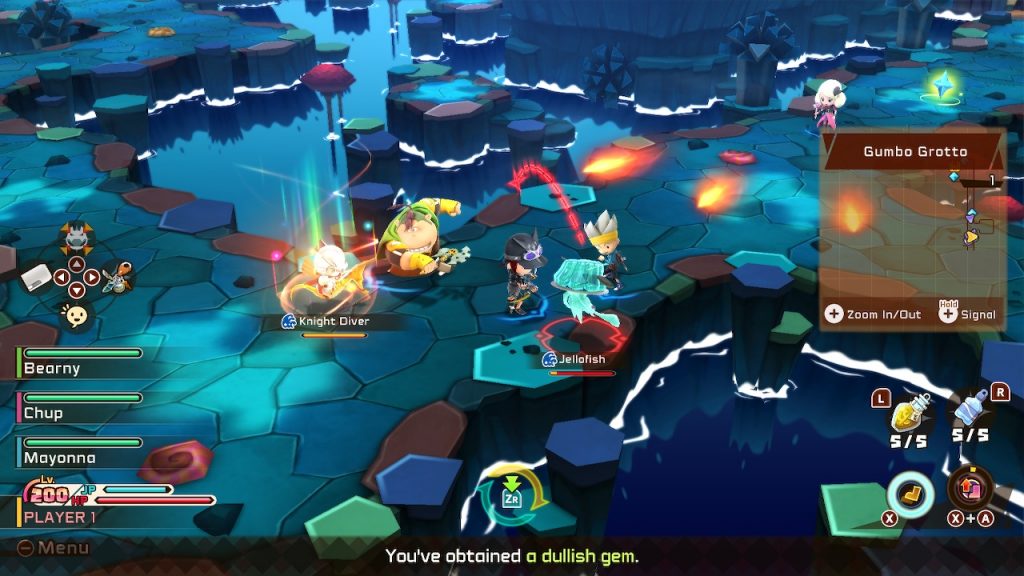 Visually, Snack World is cartoony and cute with lots of personality. The world is colourful with a varying array of biomes, each with its own look and feel. The character models are full of life and personality, with all shapes and sizes. From the gangly legs of humans to goats with big red lips and a lot of other weird and wonderful things. I have to say it is refreshing to see a game not take the realistic approach to graphics and pull it off perfectly. Even more impressive is the enhancement of the graphics from the 3DS version.
There were no bugs that I found 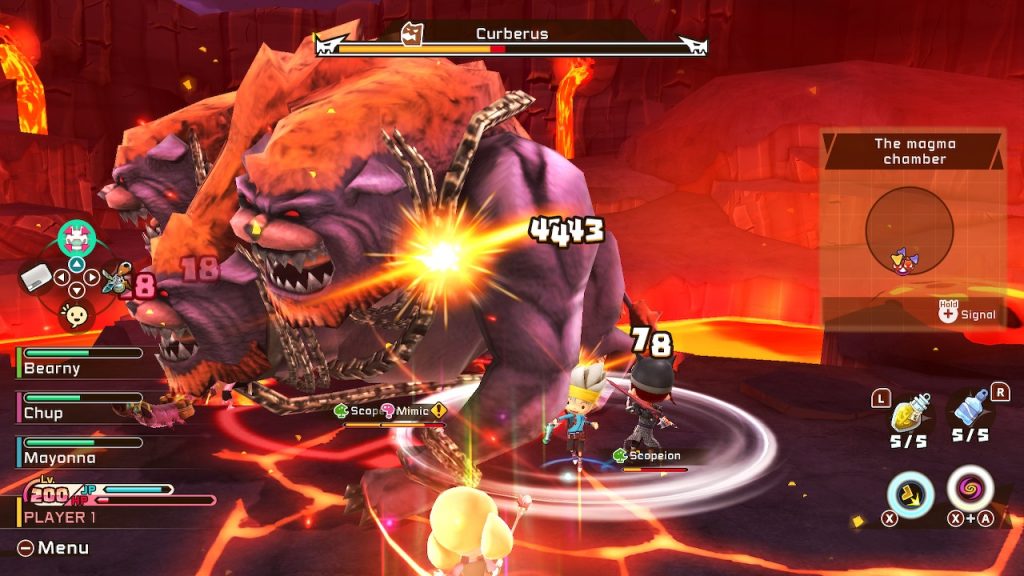 The sound design is great. The music is upbeat, happy, and I have seen my bopping my head along with the Tutti-Frutti track. The sound effects are good and they bring in the overall feel of the dungeons with a lot of emphasis on the special moves. 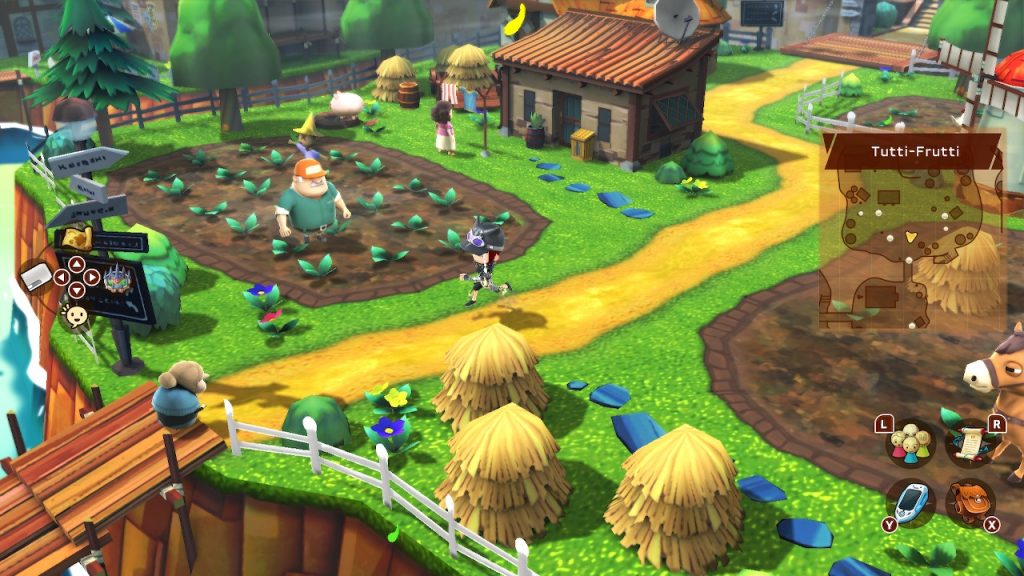 Overall, Snack World is an all around fantastic experience. Everything has personality and feeling, with some great writing. The gameplay is solid and addictive with enough depth to keep seasoned dungeon-crawler gamers happy, but does not alienate newer players at the same time.

This is a total must buy and the best under the radar release by Nintendo on the Switch. If you have ever been interested in or have played Dungeon Crawlers before, then Snack World will not let you down.