I have played my fair share of shmups in my time, from arcade classics like Galaga to console legends, Ikaruga, but never have I played a shmup as wacky with its story-telling as I did with Sisters Royale: Five Sisters Under Fire.
The plot of the game involves a legend foretold by the ancients that 5 sisters must unite and use their combined powers to defeat evil that has plagued the land. Unfortunately, the sisters are currently bickering over who gets to marry the handsome Yashin! It’s the first game in 12 years to come out from Alfa system and they’ve trod onto familiar ground; having developed the “Castle of Shikigami” series. 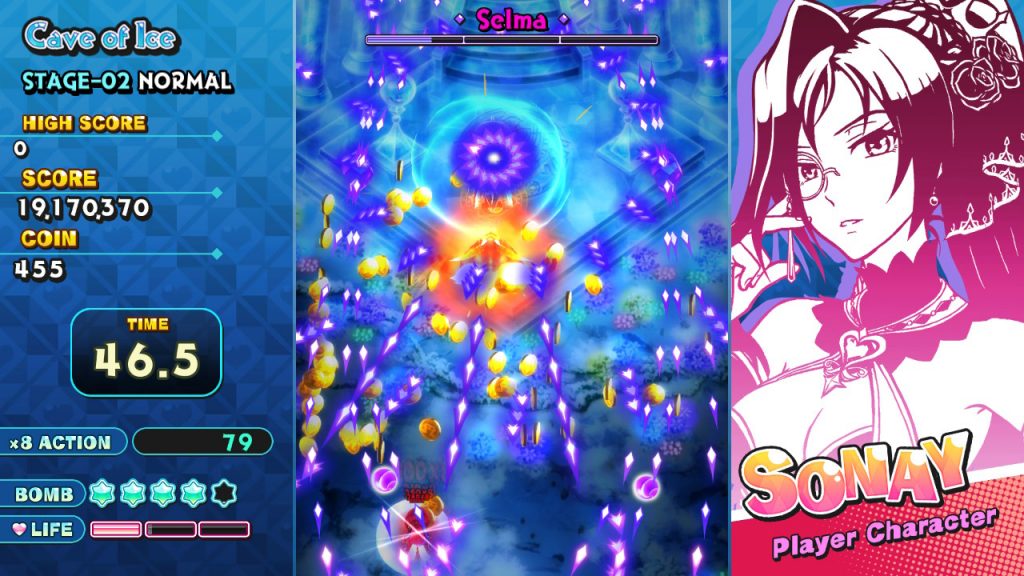 Sister’s Royale is a vertical scrolling shoot ‘em up, which for the uninitiated, means you control your character while you automatically move up through the level, shooting anything that moves and dodging anything that comes out of the things you’re shooting. A button is your basic attack, B button is a more powerful attack albeit with limited reach, and the Y button is your Ultimate (a powerful move that destroys every enemy on screen). There’s a tutorial for beginners that lets you come to grips with the game, an addition I fully support as shmups can sometimes overwhelm newbies. There’s also a practice mode, so you can try to perfect a level before going in proper; and an addition I’m slightly confused about as there’s already the tutorial option.
When you start the main game, you are treated to the bonkers storyline and then have to choose which of the 5 sisters you want to control. You then go through 5 levels of even more bonkers bullet dodging using everything you have to try and get to the end; where a sister acts as boss. The simple premise acts as a red herring for what can be a really frantic shoot ‘em up. The game lets you play the game with a limited number of lives, but unlike some games, it lets you have unlimited continues when you use up those lives. The downside?, your score resets.
And the score is the main reason for the games replayability. The game boasts of the Tension Bonus System (TBS), a mechanic that multiplies your score and coin count based on your distance from enemies and how closely you’ve dodged their attacks. It’s a superb incentive for experienced players to try to get as many points as possible, considering they’ve also included an online points ranking system. 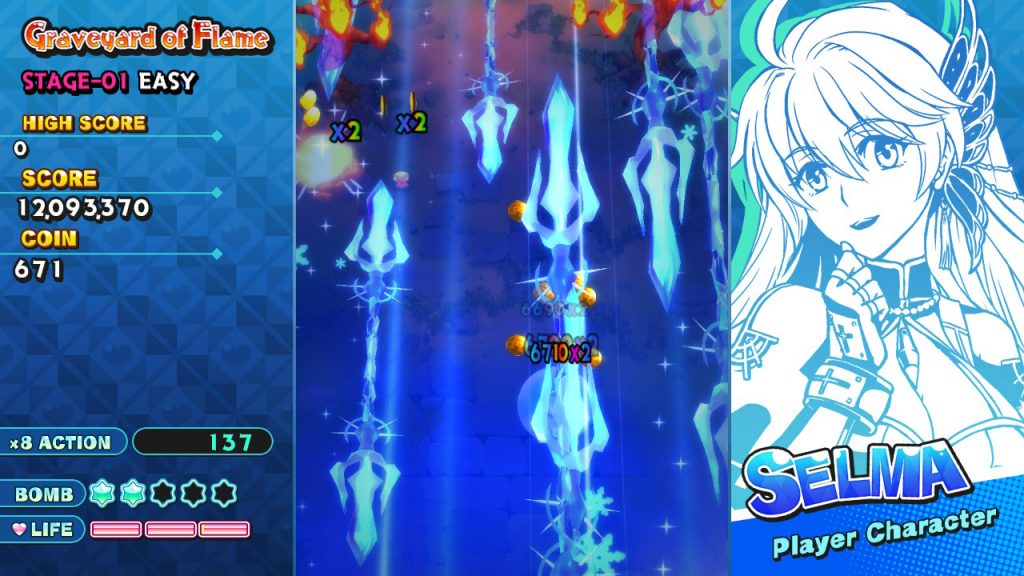 Alfa systems are masters at what they do and they’ve continued on from Castle of Shikigami to deliver cute anime characters but with the bonus of actually quite funny dialogue between each sister. Anime fans will lap up the designs but will also appreciate the personality that they give each Sister through their own dialogue. The chibi style used in the main game adds to the cuteness, and you are almost mesmerised by the pattern in which enemies shoot out their deadly munitions. The game ran very smoothly during my gameplays and I experienced no slowdowns, even when the screen was packed with all sorts of colourful particle effects. 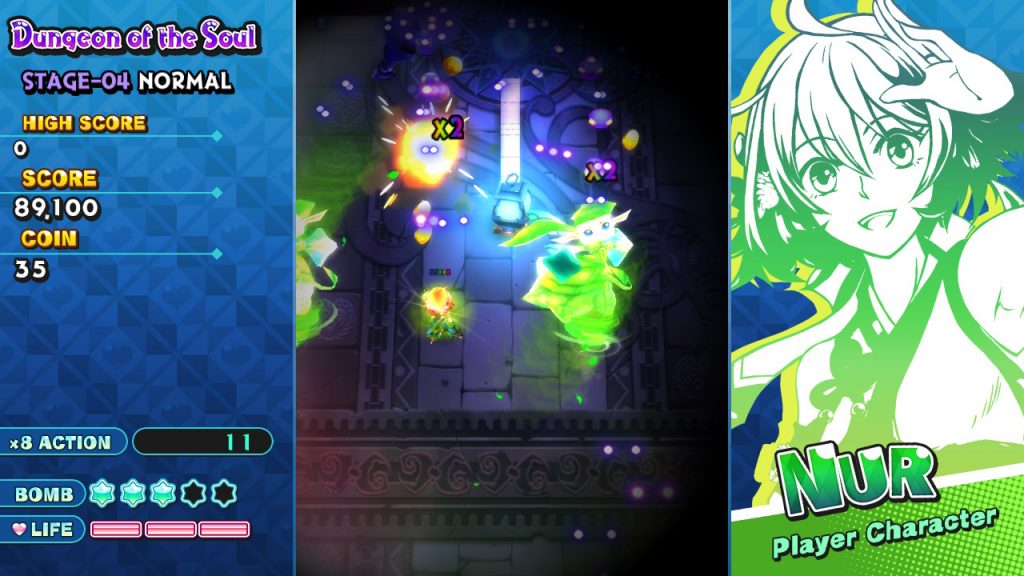 Sister Royale is packed with cheery and colourful music to accompany its cute and manic style. The main BGM is a head bopping, a joyful piece that perfectly encapsulates the crazy and often hard as nails shoot ‘em up gameplay. The sound effects are effective and satisfying to the ears, though it can also be a little manic. Sadly, the two don’t mix as well as they should. The sound effects tend to overwhelm from what I experienced from my first playthrough. Luckily, you do have the option to change the settings on the sound. If you prefer the Sound effects, keep it at 100. If like me, you enjoy the BGM more, then you can lower the sound effects down to a more reasonable amount. 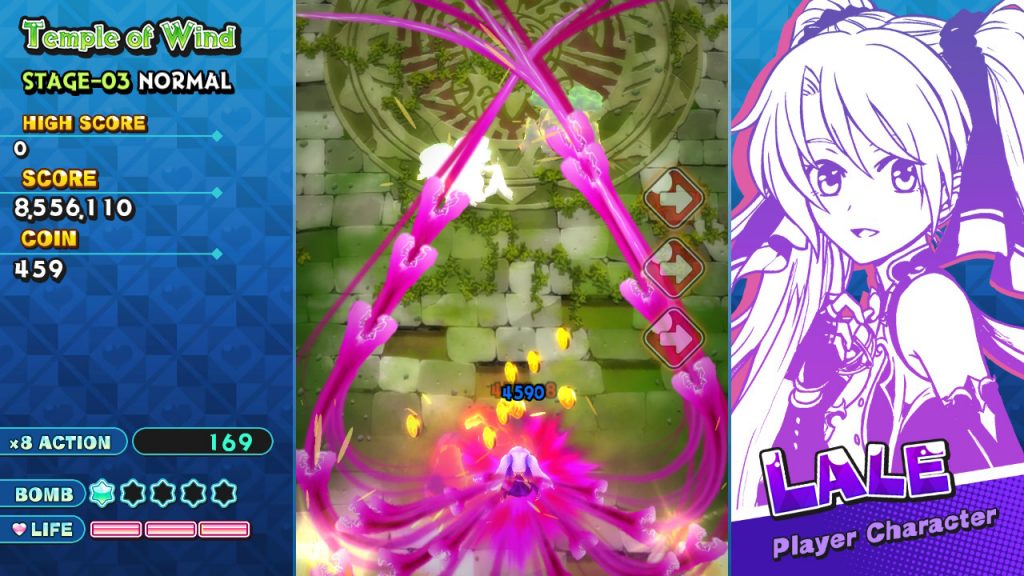 It’s a return to form for Alfa systems after their 12 year hiatus. The story is pretty simplistic, but also wacky as heck. Anime fans (I believe they’re called weebos nowadays) will lap up the colourful character designs and ridiculous plot dialogue. If you are a beginner to shmups, I highly recommend this game as your entry point to the genre; it’s tutorial and practice are pretty good and the main game is pretty forgiving with its unlimited continues. And if you’re an experience shmuphead, then the points scoring and online ranking system should sate your appetite. All in all, a pretty good wee shmup to add to the growing list on the Switch.

If you enjoyed this review and want something a little different then check out our review of Samurai Shodown HERE!

Legends of Amberland: The Forgotten Crown