The story in Saint Row IV steers away from normal routine and enters the realm of the bizarre with its new tale… You are now the president of the United States of America. During a press conference you are rudely interrupted by an alien invasion led by a strange creature called the architect. Who traps you and most of your crew within his massive alien spaceship. Purely for his own entertainment he puts you into a matrix like scenario where your body is encased in a pink fluid on his spaceship while your mind is trapped in his simulation unable to escape.  However, one of your crew Kinzie has survived the onslaught and is planning to rescue you from your nightmare! 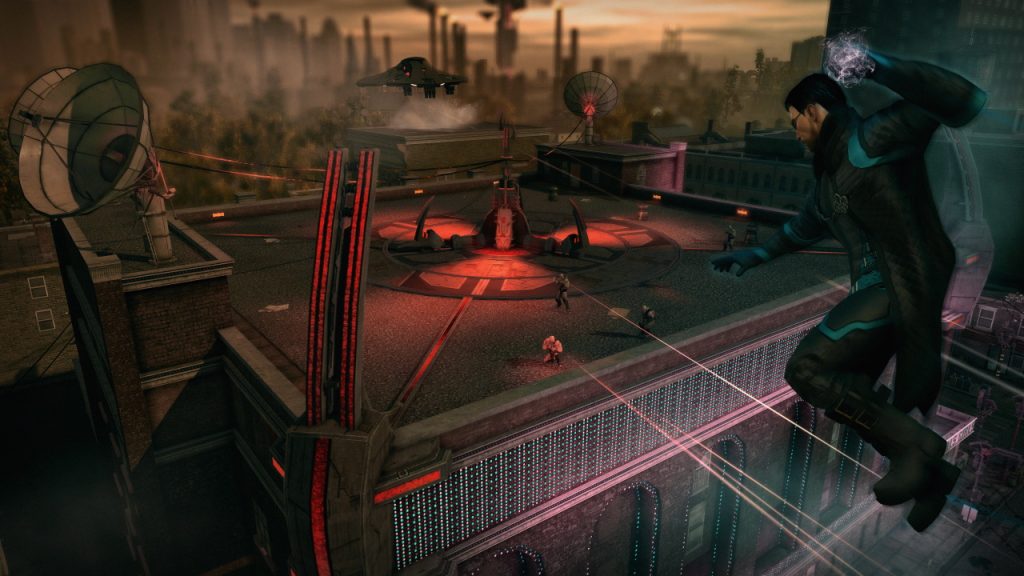 Just like previous title, Saint Row IV has a huge array of customization options allowing you to create your own type of hero or freak! The options are endless and once you’ve created your abomination there’re heaps of costumes and accessories to buy during your adventure.

Saint Row IV tries something completely different from its last outing on the Nintendo switch. Instead of focusing on a war-torn Steelport or fighting against rival gangs, the city is turned on its head. While Steelport reminds mostly the same apart from a few new alien structures, the massive alien craft floating above your head; independence day style. The city’s layout hasn’t really changed all that much which was a little disappointing as I’ve already experienced this city before in last game and would have liked a completely new world to explore.  However, there are two areas that you will venture to…  one is the simulation of Steelport and other is the inside of your own spacecraft in the real world which you’ll use when interacting with your crew through the main campaign, side missions. Sadly, there’s no map, and I found it difficult to navigate when in the spaceship.

With that in mind you’ll find that there’s a lot more freedom, potential in the simulation of Steelport this time around and while you can still rob cars, customize them in garages like you could in previous title.  It is the new super powers that dominate your time. These powers allow you to run extremely fast or bound buildings in a single jump and even use elemental abilities including a blast attack, force powers like telekinesis allowing you to pick up cars, people and launch them into the air among other abilities.  Each power can be upgraded, each time you level-up you’ll receive new secondary upgrades allowing yourself to become an overpowered super hero.

However, gaining these powers is less than exciting as you need to fight these black creatures that appear at key points in the story.  These battles become pretty tedious, as it requires the same tactic to knock their energy shields out so you can damage them.  It becomes a little repetitive but once you’ve completed quick QTE after defeating them. The battles over and a new power will become available.  You’ll then be sent straight to a training room to try out your new ability before being returned to the simulation to continue the story. There also data clusters scattered everywhere in Steelport these will allow you to upgrade your abilities in the pause menu.

To be honest, I was quite happy to avoid nearly all side quests, mini games and focus 100% on the main campaign, which was definitely an enjoyable experience. The game really gets creative throwing you through some great missions including text based adventure with some hilarious conversations between you and the alien overload Zinyak.

A Street of rage 2D clone and a cool Tron like bike ride through a digital world … there was never a dull moment when exploring the simulation world. And there’s some hilarious dialogue between you and your crew. When you’re not playing the main campaign you can try your hand at destroying out-posts, playing crazy mini games like throwing cars, people through rings to score points.  There’s always something to do in Steelport including hacking shops to gain access through small puzzle interactions. And even after you’ve completed the main story, you can return, play things you’ve missed.

Sadly, when you become this powerful all the vehicles become completely redundant to use as your fastest then them, your abilities give you freedom that no vehicle can match… this follows on to my biggest issue with the game.  This time around there no main area to access vehicles. So if you want to use a helicopter or an alien vehicle, there’s no way to use them as all your HQ’s that were available in the third outing have been destroyed.  You can access cars on pause menu however this list only holds cars you’ve taken to a garage and there’s no place to store flying vehicles that I’ve seen so far which is a shame.  My biggest gripe is the Re-election DLC isn’t available in the game, in fact it’s nowhere at all?  It mentions it’s unlocked at the very beginning but doesn’t appear in gate-way, which is other menu when you travel between worlds that you can use.  Its huge let-down as apparently there is a lot so-called DLC available, but it’s not here… either this is a bug or glitch or someone has dropped the ball. But its huge disappointment.

(Ive contacted the publisher, they’re talking to developers, so once I’ve found out what’s going on this section may change) 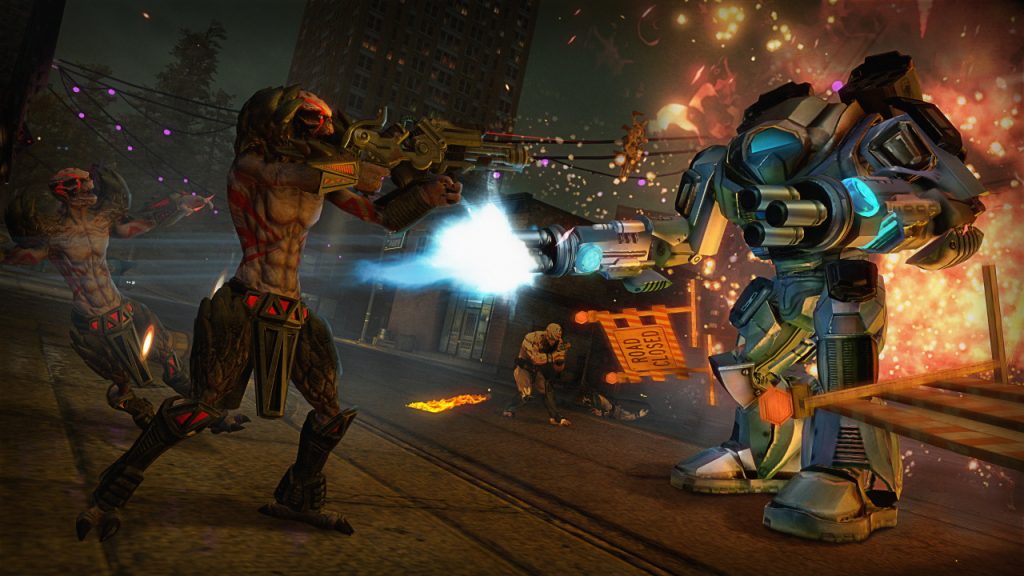 Graphics in Saint Row IV are pretty good looking and look great on Switch. I feel as though developers have gone above and beyond with this port and it shows with numerous particles effects, and lip syncing all look great. I feel like its big improvement over saint row the third. 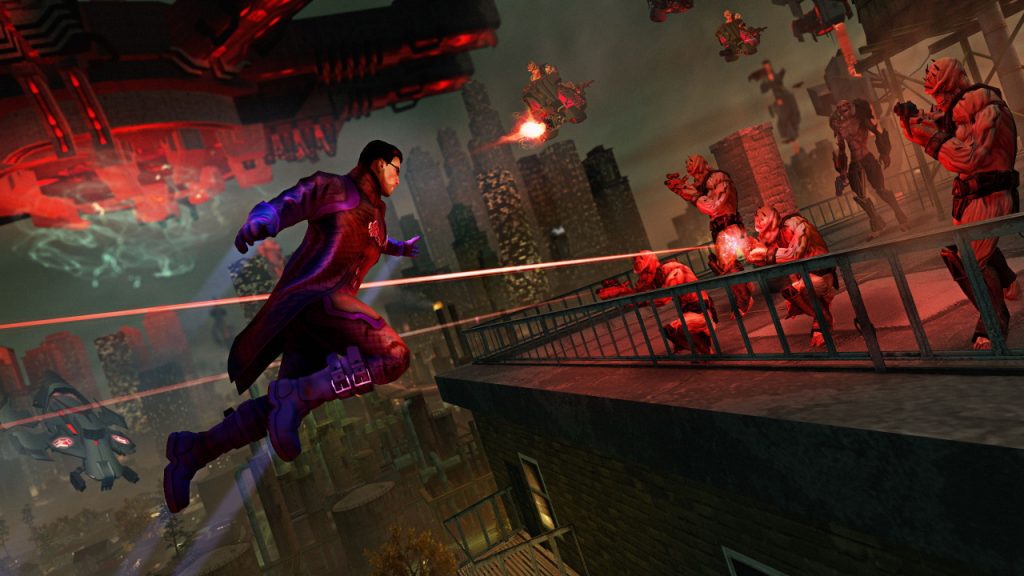 Music… Oh, the music hits all right notes. When I heard Aerosmith “don’t Wanna miss a thing it filled me with utter joy.  There’s a lot of song you’ll recognise here, you can change stations, make your own mixed-tape to listen to during play. 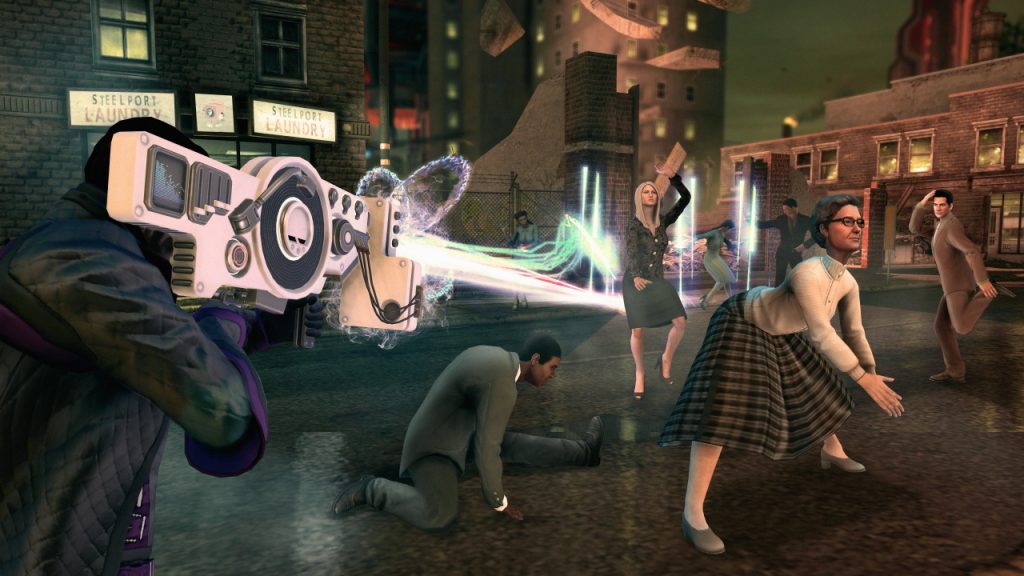 I really love Saint Row IV, its huge improvement over last saint row title and new powers really push this into super hero territory.  Felt little nostalgic when playing as it reminded me of hulk ultimate destruction on GameCube when I was bounding over buildings. There’s so much to see and do and when the main campaign is completed there still stuff to go back to.  My biggest issue here is the missing DLC in re-election. Which is a huge shame as there a lot cool weapons, vehicles that were missing…

Hopeful the developers can shine some light on this issue soon. But it can’t dampened my experience with this title. As it’s one of my favourite action games on the Nintendo Switch right now.

Check out our review of Tokyo Dark for something different HERE!