RiverBond is a rather adorable hack and slash adventure game set in a voxel world. Play solo or with your friends locally across 9 diverse worlds with over 40+ weapons to use and massive bosses for you to conquer. Collect 100 different character skins ranging from crispy bacon, an avocado to even a sugar-coated doughnut. You can even unlock some well-known faces like from popular indie games like shovel knight, bastion and lovers in dangerous space time among others.

Your mission should you choose to accept it; is to free all the leaders of the eight worlds that are being imprisoned by the dark knight. 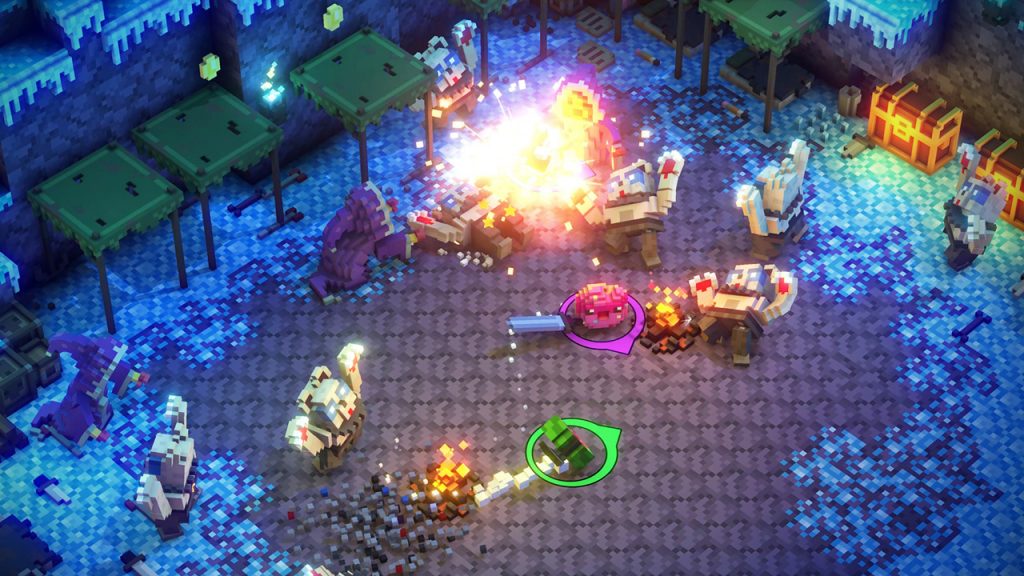 You’ll have the freedom to pick any level you wish from the beginning of the game. When starting a level you can pick a character to play as, although you will only have access to Max, Donut, Watermelon and a pug for starter characters. Finding chests throughout each world can unlock additional characters which adds some replayability for those who seek it.

Once you’ve picked your character, you’ll start your quest with each world having multiple levels and quests to complete. None of these are overly difficult though, some require you to simply find a key, talk to an NPC character or even just kill all the enemies in a level to complete. Any objects that need to be directly interacted with will require you to press and hold the X button until the action is complete.
As well as completing your objectives, you can also explore and find treasure dotted about; like coins, diamonds and Star coins that are hidden in each level. These will reward you with BIG points which will be added later to your total score. Sadly there no online leaderboards to share your scores with other individuals… but it does provide some competitive play when playing with friends locally.

Also, keep an eye out for chests that are hidden around each area. These can contain new weapons for you to use. It’s actually really important to search for new weapons as some enemies, later on, can become quite challenging to defeat if you’re still using your starter weapons. You can equip weapons in your inventory at anytime, however, this will take up one of the 5 spaces in your inventory. Swapping them out with other weapons means you’ll lose your previous one… so be careful when changing weapons. Also having better weapons will allow you to kill bosses more efficiently as well as the many different types of enemies found in RiverBond.

The bosses in RiverBond are a pretty diverse bunch, each having there own unique look, abilities and attacks. From a huge Godzilla like skeleton to a boxing penguin. Each boss waiting at the end of every world can be a challenge to defeat… if you’re not prepared for it.
Most of them are not alone either and will have countless goons surrounding them, making these encounters more difficult and tense.
There is no penalty for dying in RiverBond though. Upon death, you’ll simply respawn back into the level ready for round two.
This may be seen as a negative; however, I feel like it’s a positive thing as it means you can continue on without having any frustrating moments occur; especially when playing with younger siblings.

Controls are really simple to use; you can move with the left analog stick. Change weapons with left, right direction pad. The X button is used as your action button to interact with quest objects and also pick-up objects, you can also throw them in your chosen direction. You can slash with Y button and hold it for more powerful attack. You also Jump with B button, roll out of the way of danger with the A button. When using guns, you use the slash button to shoot, or if you want to, you can be more precise by using ZR trigger to fire and the right analog stick to aim. Reloading is done automatically for firearms.

While characters don’t have any unique moves, they all have the ability to use their slam move that can stun enemies that surround you if you’re being swarmed. You can activate this move with the R button and use L button for a funny dance emote. 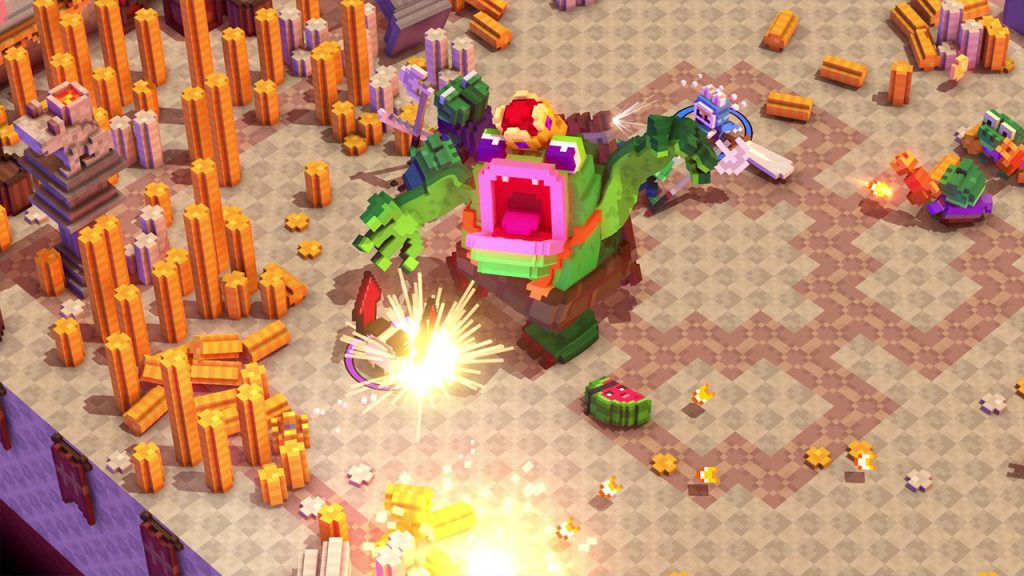 Special mention has to go to gorgeous voxel graphics, presentation and level design… everything can be destroyed or chopped down realistically. And each object falls apart with real physics which makes destroying stuff in RiverBond really fun. Each world has its own theme, but everything looks unique with little environmental effects that help bring each world to life. Looking like dioramas each level is made out of voxel blocks which I love. Its just fun to hack, slash your way through tall grass or knock over old ruins and watching them tumble over. RiverBond has that kind of really charming aesthetic.

My only issue with RiverBond is the story feels like an afterthought and talking to NPC characters doesn’t really do all that much. You will simply get a small reward of 100 points for talking to them. In all honesty, I very rarely bothered reading the text, I just wanted to get into fights and explore. 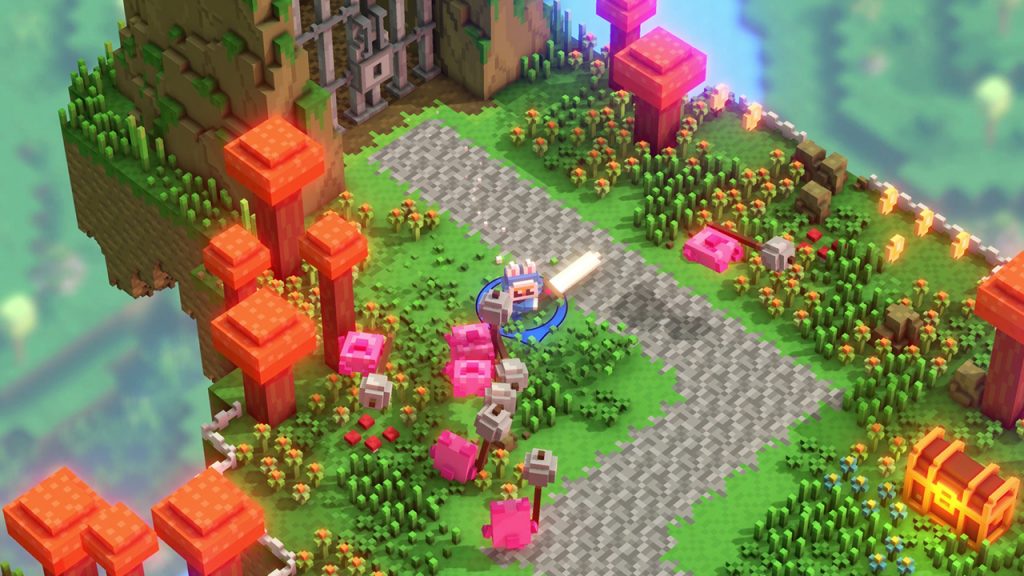 Music also plays a part in the games design as it can be so calming, relaxing to listen to and is just another soundtrack that I really enjoy listening to. Graphics and the sound design fits the game perfectly and really gives it its own identity making it stand out from other games in its genre. 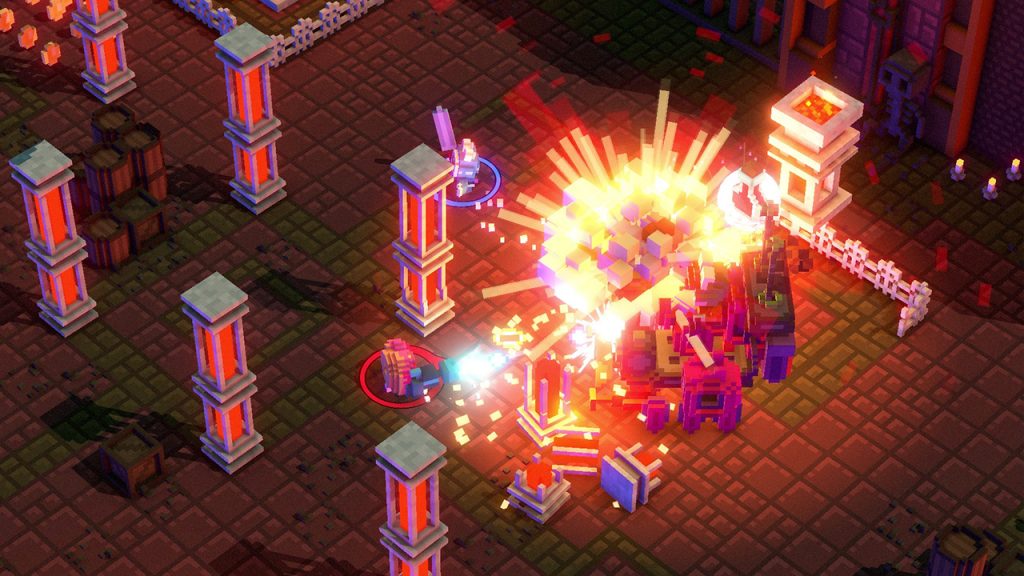 I really like RiverBond on the Nintendo Switch it’s the only game at the moment that allows you to play as a fried egg or a doughnut as your main character.
However, apart from trying to collect all 100 characters, playing couch co-op with friends, there isn’t much else to do once you’ve completed the game. But overall, this is still an enjoyable hack and slash title that definitely comes into its own when friends join in on the fun!

If you like this review check out Monkey Barrels for something different HERE!