Back when I was a lad, Streets of Rage and Streets of Rage 2 were my go-to games for the Mega Drive. I cannot remember how many hours I sank into them, but whenever I think back or see one pop up at various speed running events through the year, the fond memories come charging back at me.

The side-scrolling beat ’em up was, to me back then, full of life and colour. They had everything I could have wanted in a game.

I left the gaming world behind for a while but now, as I fully re-immerse myself in it, I find myself staring at the cover art of a game that conjures up said fond memories even before it comes out of the case.

Surely it couldn’t be. Could it be possible to capture nostalgia? I know Stranger Things did it for TV, but could it be done in a game? Could River City Girls deliver something that would take me back to my childhood but entertain and challenge me as an adult?

River City is no strange setting for many games. There have been countless games set in this universe dating back to arcades in the mid-1980s. While the first true beat ’em up released on the Famicon in 1991. However, those games focused around the male character. Kunio was the main character for most of the franchise’s history. Assisted by his best friend (and occasional main character) RIki.

This is the first game in the series to offer lead characters that are neither of the boys. Kyoko and Misato are introduced as Kunio and Riki’s girlfriends, and after they believe the boys to have been kidnapped, they take it upon themselves to wreak merry hell on all of River City until they find them.

Strike first, question later is the motto these girls live by as their feet and fists fly with unrelenting fury. In fact, it is only after decimating the entire population of an area in the city that they stop to ask people what happened to their boyfriends.

The unrelenting pace of the game is exactly what makes it a fun throwback to the great games of my youth. 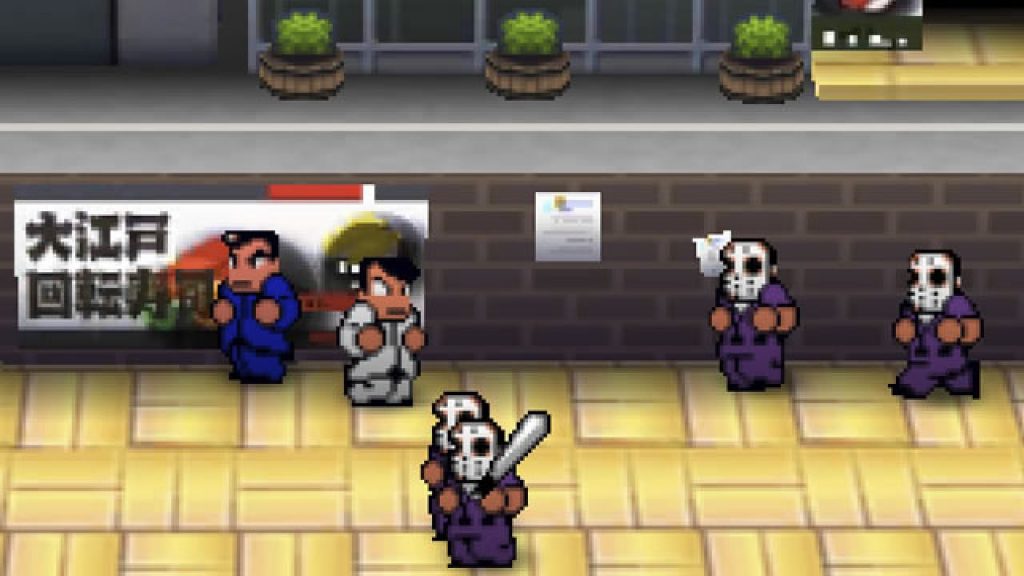 River City Girls is a classic beat’em up, but with a more open world feel to it. The days of restrictive one-way directional flow is long gone. In this game you have the full power to backtrack and explore/revisit all areas of the city that you have unlocked. Even after defeating the final (not really the final final, but the first final boss) you can go back and explore the city and continue the quest for 100% grades.

The gameplay is simple. You need to move from one screen to another beating up anybody that tries to stop you. Each foe you down will give you both XP and cash.

Money can be used to buy all manner of different things, including:
· Health boosts – these take many forms including sushi, burgers, rice dishes and candy
· Stat boosts – clothing and other outfits that help you toughen up your character ahead of the next big boss fight.
· Weapon Durability – In one bookshop, you could buy a range of items that make certain weapons indestructible.
· New moves – There are several dojos located around River City, and the friendly sensei is always willing to teach you a new move or two to help you flatten your enemies even more effectively than before.

For most screens, you can engage with whatever enemies you want to engage with and could essentially avoid a lot of conflict if you wanted. Although that would make me question why I was playing a beat ’em up if that was my tactic.

The end of each section of the city brings you up against a different boss. Each boss will reveal a little bit more about where you need to go to find your boyfriends. There are six bosses in total and then a secret seventh boss for those that unlock it. How do you unlock them …? I’m not going to say because that would spoil the fun.

There is some backtracking required in the game, but it is minimal. Most was in the build up to the fifth boss where you need to revisit some screens in order to meet a character that appears there to give you some information.

I did find myself back tracking – taking the bus from place to place – in order to level up a little, as well as purely in the name of exploration and experimentation for this review.

This game was, at times, remarkably difficult, yet mostly due to the sheer number of enemies that could spawn in any given screen. The bosses themselves were, for the most part, relatively simple. Identify the pattern and implement a plan against it. The fifth boss, Noize, was the one that games me the most trouble.

As you would expect in any good beat ’em up, the game provides a wide range of weaponry for you to use as you batter foes into submission. My favourite was the chain. It had a good lifespan, and if you got people into the right position, then you could juggle a whole group in the air and wipe them out in no time. Although, there was also something fun about using a giant fish to hit people with, especially when you hit them with a throw, and using a downed enemy as a weapon was a hilarious way to take out the field.

The game even offers a few side quests for you to complete, presented by the weird looking, clearly perverted neighbour of one of the girls. He is a weird guy, clearly has some issues going on, but will pop up in dumpsters from time to time giving you a mission to fulfill. These are optional but do give some nice rewards.

As I mentioned, the combat comes thick and fast. The fights are slick, and everything just runs perfectly. However, as much as I adored this game, it is not perfect. I have two core gripes with the game, and while the first may be more about my skill as a gamer, the second was, at times, controller-smashingly annoying.

The first was the alignment of your character compared to the others. While this is a minor grip, and that only had a mild impact on things – other than boss fights, where this cost me a few lives – is that you can be standing by your enemy throwing a combination of punches, but because you are just a little out of line you miss everything. On its own, that’s fair enough, but when they can hit you despite you being out of position, it makes it an irritation. The trick I had was to watch the shadows, especially during boss fights, but that still was not a guarantee. This was a special annoyance during the Abobo and Sabuko fights.

The second, which as I mentioned was often beyond frustration, was a flaw in the technical design of them game. When you have a limited range of attacks, with the main attach button being the square (on the PS4), it is nonsensical to make that same button the interact button.

There are plenty of other options that could have been made, but nope. I lost count of how often I was fighting my way through a horde of enemies, narrowly escaping with my life, onto to attack and have the game think I meant to walk through the door, only to send me back to the previous screen and leave me having to start the fight all over again.

Now, this did not detract from my love for this game and did not it ruin the game itself, but it was a huge irritation because it seems like such a silly mistake to have made in the design. 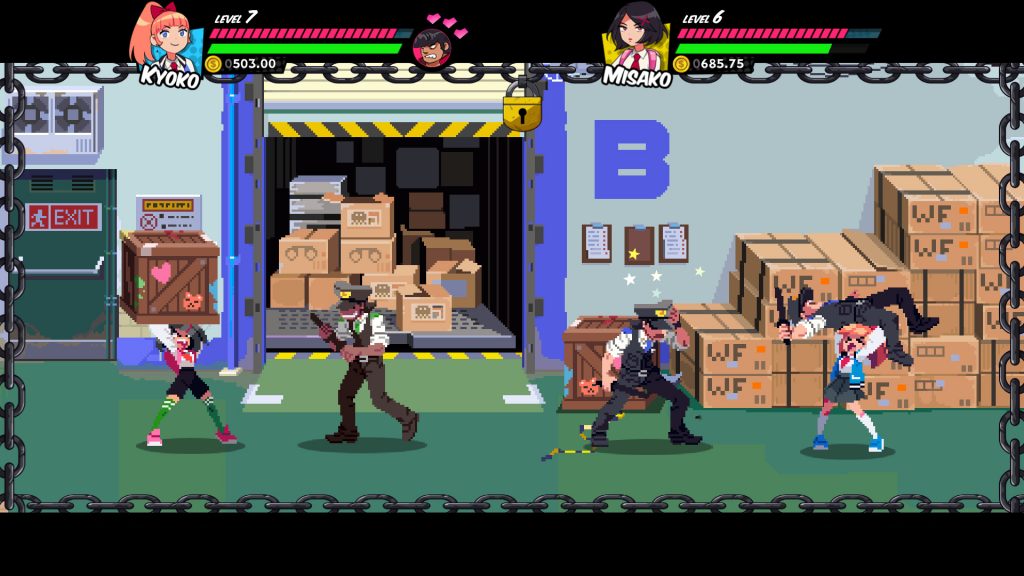 The game is also a treat to watch visually. The colours are vibrant and wild, bringing life to the screen and helping immerse you into the world.
There is a nice range of enemies, with each stage adding something new to the frenzy, along with retaining those from earlier levels. There are close to a dozen different types of enemy you will encounter during the game, and while some of them are clones of each other, that doesn’t detract from anything. They are still different in terms of their attack patterns, health and general appearance.

What I also really enjoyed about the game was how different it looked close up as opposed to when you were sitting across the room. From a distance, the game looks great. It’s sharp and attractive with plenty to keep you entertained. When you get closer to the TV, as I did in some instances, you see the detailed work that went into everything. You can see how the game has been built on a retro aesthetic and does not shy away from that fact.

The in-game menu is presented as a smart phone, and you must scroll through the different pages to see the different options. The phone is customized for each playable character, and as I mentioned above is a nice touch at helping establish who the girls are. Kyoto’s phone is cute and fluffy, while Misako’s is old, and the screen is cracked and broken. This is a small attention to detail that really helps the game pop, and the designers should be commended for it. 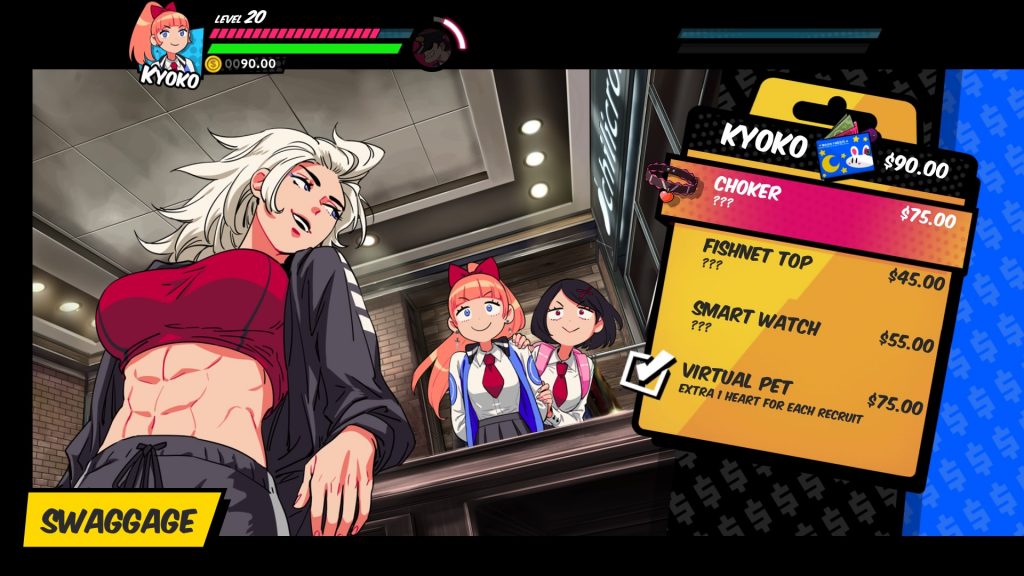 I have to start with the soundtrack. The tunes from this game got into my head more than any other game I have played. I even found myself listening to the soundtrack at work one afternoon. The songs are fast, catchy and match the game perfectly. The theme tune is one that sticks in the mind, and I find myself humming it as I wait for the bus or walk the dog.

The dialogue is another plus point in River City Girls. It is witty and on point with its venom when needed. It does a great job of introducing the characters and building up some back story between them and the villains they encounter. Misako and Kyoto are very different people. Kyoto is the loveable airhead. She is ditzy, naïve and charming. While Misako is the tough girl. She is a brawler through and through, doesn’t take crap from anybody and has some clear trust issues. Together they make a great team, and with the combination of dialogue and subtle visual clues, their characters come to life. 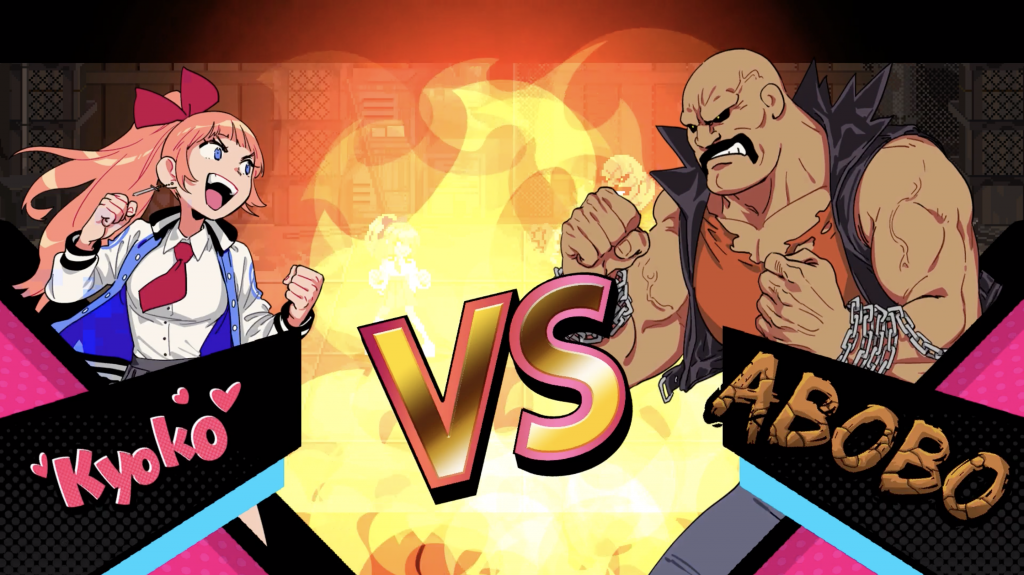 I adore this game. It is one of the most entertaining, over the top romps I have played in a long time. The gripes about the attack and interact button nonsense aside, this game has it all. It looks great, the fights are challenging and fun, the bosses are all different, and the interactions and dialogue throughout are laced with wit, sass and just enough weirdness to keep you on your toes.

The ending is another fun part of the game. I won’t give it away because that would just be mean, so all I will say is … wait for it. It’s well worth it.