Resident Evil 3 Remake has finally released. My personal favourite Resident Evil title, so when this code dropped in my inbox, I dove on it. Now to find out if this lives up to the original or will it fall to the Nemesis? Also, we got a copy of Resistance the mutliplayer game from Capcom, I will give a quick overview of the game but it does not factor into the score.

The events in Resident Evil 3 are all prior to the events in Resident Evil 2.
Racoon City has a spree of strange missing persons reports. It has been left to the S.T.A.R.S. unit of the police department to investigate; they have concluded that Umbrella and their T-Virus is responsible for the disturbances. After losing most of the S.T.A.R.S members, it is up to Jill and the last remaining member to get the truth out there. However, Umbrella control the Police.

Now, hours before the events of Resident Evil 2, reports flood in about a mysterious Cannibal virus. Jill knows it’s time to take action for Racoon City. Unknown to Jill, Umbrella have already sent the bio-weapon code name Nemesis to pursue the last remaining S.T.A.R.S. members.
So the story of Resident Evil 3 is not a true remake. There have been plot changes and it is now a linear adventure. The story itself is not too bad, just a lot of differences. 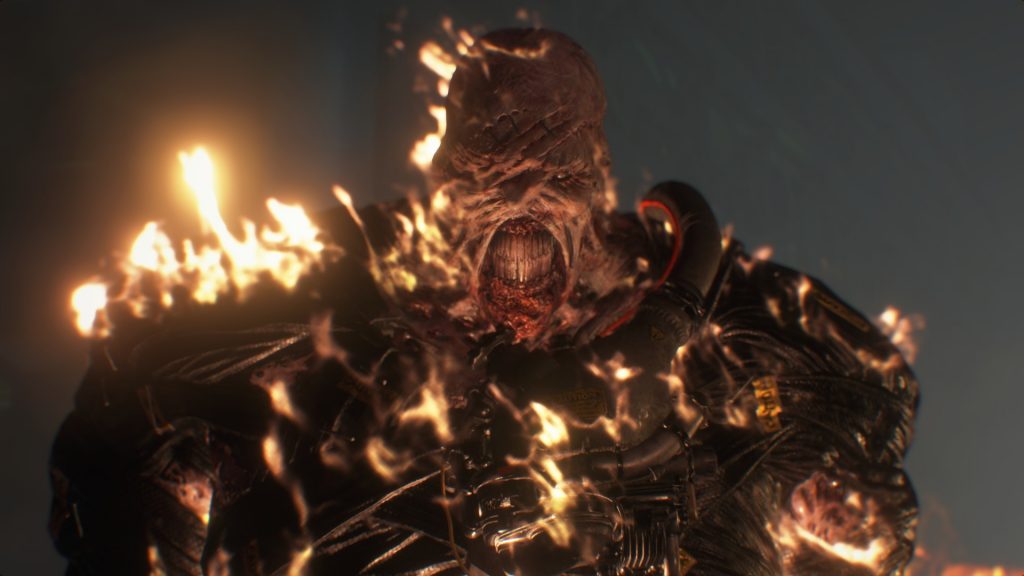 The gameplay is for me the biggest let down, not in terms of how the game felt to play but more to do with the design choices Capcom made within the game.

To start with, let us look at the one major element for replay-ability in the original compared to the remake: the decisions that could be made. In Resident Evil 3 on the PS1, there would be choices to make at points in the game. These decisions would change how the story progressed, but also the ending. The first choice is run or fight the Nemesis outside of the RCPD. It is a simple choice, but it made players come back to see what would happen if they chose differently. However, in the Remake there are no decisions and only one ending. This omission cuts replay-ability down considerably, unless trophy hunting or playing all difficulties.
The other point I want to raise is Nemesis, in the original he was a relentless wall destroying menace that you would actually be worried about. He would not stop hunt you until he got you or you got to a safe room. He was in short terrifying in the original, like Mr. X in RE2. However, in this remake Nemesis is nothing but a plot tool that shows up in set pieces only. Its only function is to make the game have a more action based feel, but it feels empty. Nemesis feels like a harmless pawn rather that a life threatening weapon, also he never poses a real threat. Thanks to the newly added dodge mechanic, while running press L1 to dodge, this totally neuters the Nemesis.

This remakes offers everything that the RE2 remake gave us in terms of controls, it is an over the shoulder 3rd person horror game. It does nothing at all new so it is a good thing that the controls and the overall feel of the game is great and action packed.

The Resident Evil 3 comes packaged with the 4 vs 1 multiplayer with a slight twist – Resistance.

Resistance sees four infected survivors go through four stages of increasing in difficulty rooms trying to survive as a group. Each of the survivors has their own special abilities and jobs. For instance, one character is a damage dealer (slightly more damage, but is also a hacker that can hack and disrupt cameras). Each game time starts with 5 minutes on the clock and once zero hits it is game over. However, dispatching the hordes of zombies and monsters will add time back to this limit, in order to help complete the missions in the rooms. One mission could be collect four security cards. On the flip side, if a survivor gets hurt or killed time is taken off the limit. Considering all these factors team work essential. There are upgrades and better weapons to buy with the money collected from killing enemies.
The single player who is trying to test these subjects are called Masterminds. There are four of these to choose from, each with their own unique ability. The twist here is that the four other players do not interact with the Mastermind, instead the MM places out the enemies that the others will fight. This is done with a deck and placing the card in a room to summon the enemies. As the Mastermind is not in a room, they can move freely between security camera (hence hacking for a survivor). As well as placing cards the Mastermind can use gun turrets on the cameras, directly control an enemy and has a special summon. Yes, the four Masterminds can summon their own Tyrant to hunt down survivors.
The gameplay is fun once you figure out how to play the game, tutorials are a must. However, i found the Mastermind had the upper hand through my games. I enjoyed the progression of leveling up, unlocking perks and new abilities. This is not for everyone but its nice to see Capcom try something different, that is a competent game type. 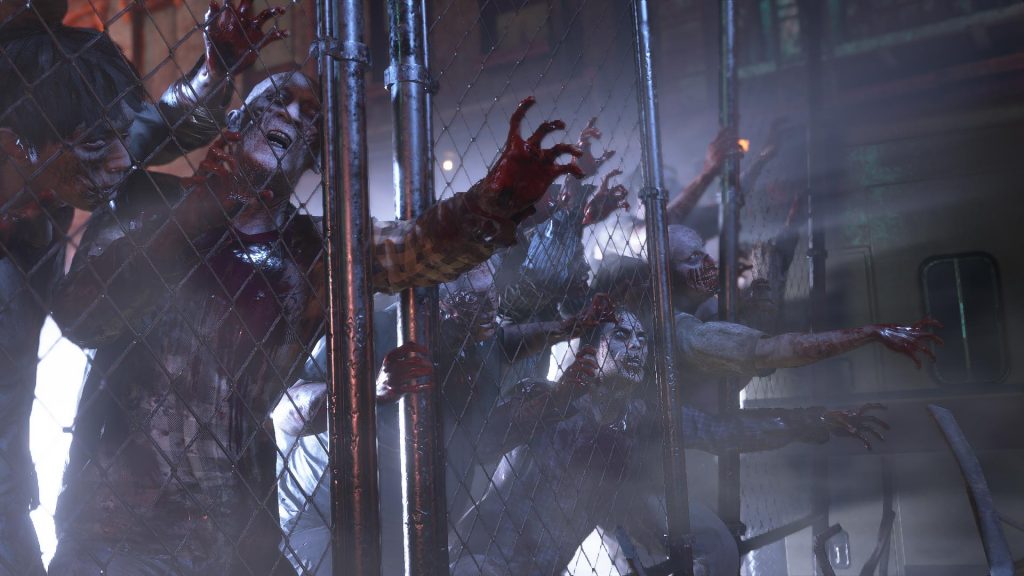 Resident Evil 3 is beautiful. The RE Engine is an outstanding game engine. From rendering people to monsters, everything looks…WOW. Somehow Capcom got this game to look better than RE2. Along with the overall over-haul of the graphics and the new areas, some enemies have had a nice facelift too. Most noticeable for me was the Hunter class monster. In the original it looked like a bipedal form, even sounded wet when walking. Now the Hunter looks unbelievably good. It has the same sort of hunched over figure in a greenish-brown colour with one massive claw that will tear Jill’s throat out in one swipe. However, now the Hunter also has an insectile head exoskeleton with moving mandibles. This was easily the best-looking Hunter so far.
There were no bugs to really make a note of here. 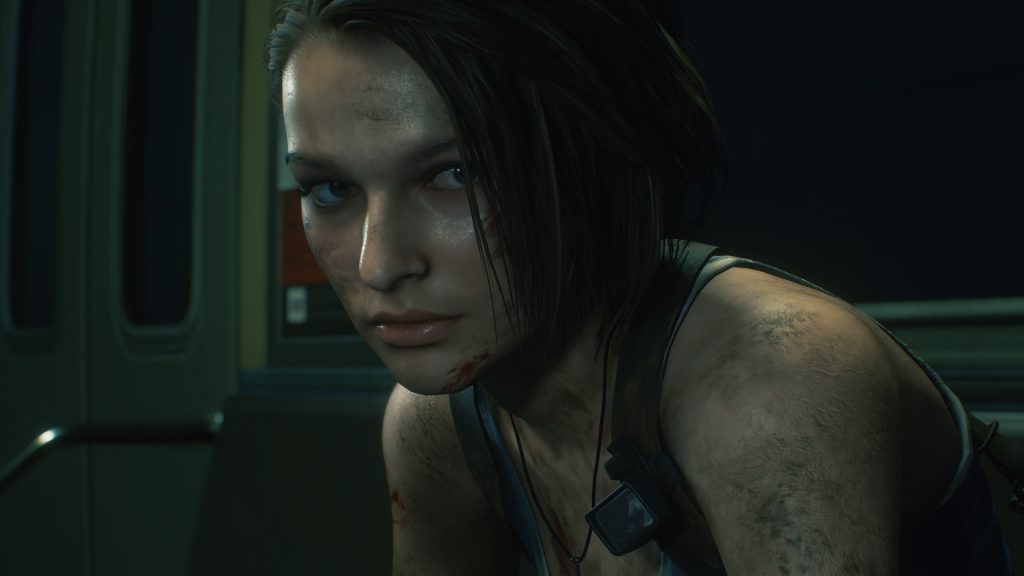 As with the graphics, Resident Evil 3’s sound design is great. For the first half of the game I played with the speakers of the tv (couldn’t find my headset). The atmosphere and the overall world sounds were creepy and apocalyptic at times. The second half was with the headset and what high dynamic range change! There were so many ambient noises and sound effects that I was missing. The first thing I really noticed was the cracking of glass under Jill’s feet.
The sound design is outstanding, even Nemesis and his fabled ‘STARS!’ line just sounded awesome. 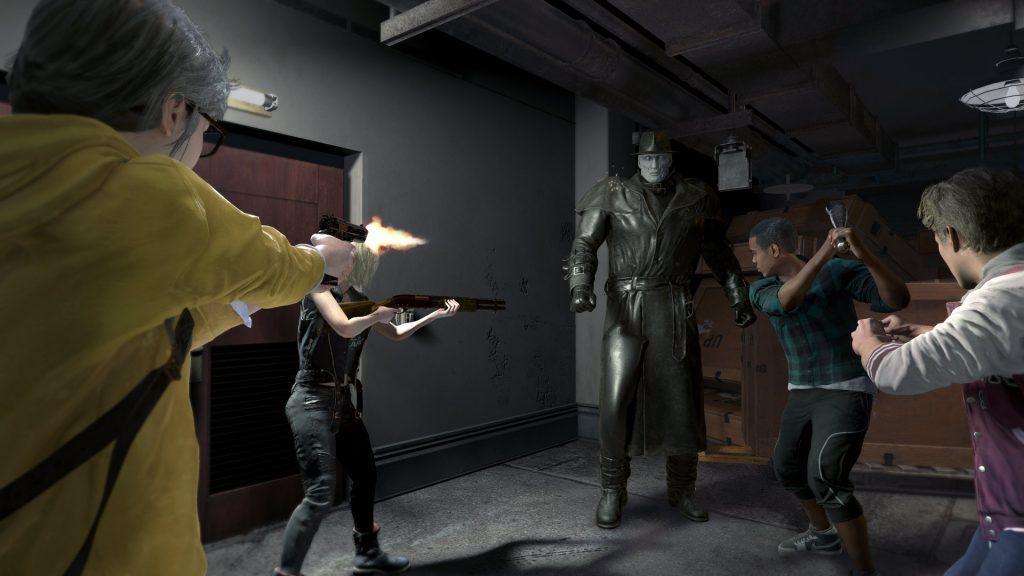 Overall, if this was not coming off the back of the majorly successful RE2 Remake, Resident Evil 3 Remake would have appeared as a better game. However, with taking away the two best elements of the game ruined it for me. Yes, the game is stunning and the sound design is amazing, but there is not much to the game. I finished my first run in 4 hours 44 minutes. I feel that RE3 was made purely to get people to play Resistance. I do not understand why these changes were made. If it’s not broken why fix it?

If it was cheaper, then I would have recommended this title but as it stands I would wait for a sale.

If you like this review check out HyperParasite HERE!

Badland: Game of the Year Edition