Remnant: From the Ashes

In Remnant: From the Ashes, your character is sent to rid the world of the evil in this post-apocalyptic world overrun by monstrous creatures, by besting the Dragon. As one of the few survivors of this world, you must protect the last vestiges of humanity at all cost. Never fear as you won’t need to do it alone. Venture with up to two more survivors in this ever-changing world.

From Gunfire Games previous titles, including Darksiders 3, I was excited to see if these guys can bring the action as well as make something different at the same time. Let us just say I was not disappointed in the slightest. 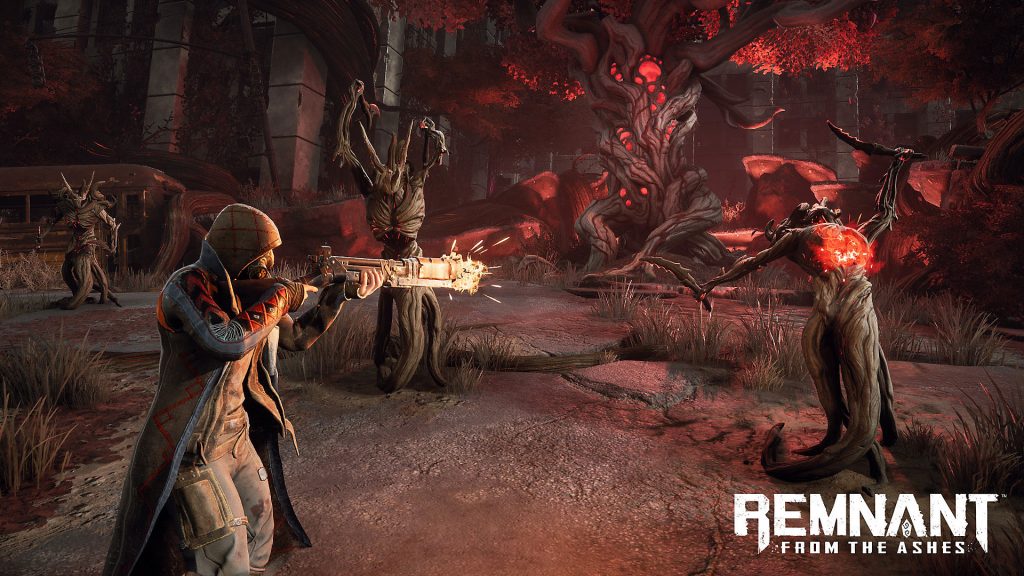 Remnant: From the Ashes take the gunplay of Mass Effect 2, and the core mechanics of Dark souls, mixes them up and comes out with something gratifying and unique in the Souls-Borne games. At its core, this is a dark souls shooter, just like Immortal Unchained but good. Lastly, I have heard people say this is a looter shooter. It is not! There is loot to collect and new items to find, but that is not the aim. You will not be spending tons of hours trying to get a gun you want. *slight warning – there will be a few Dark Souls comparisons.

The main gameplay loop is to go out into the world and take out everything that moves. Go back to the hub upgrade weapons, armour and mods, them back out to carry on to the next level. Each visit to the outside is randomised with enemy placements, making it feel almost like a new level each time. With this set up in-game design Remnant differs from Dark Souls, as it is possible to learn where enemy spawns are and be ready for them, here it’s different, taking that little luxury away.

In the beginning, you create a custom character and are thrown into a tutorial level, that shows the basics of movement and combat, then you come to Ward 13 (even if you die in the tutorial). After a small exchange with the leader of the Ward, you are sent to put the power back on. Here you pick a ‘class’, this is not fixed, but it does define the starting weapons and traits that you begin with. It is possible to mix and match later in the game with all weapons and equipment. This is your gun tutorial. Once completed you are tasked with saving the world (an a-typical first day in Ward 13).

The controls handle like every other 3rd person cover-shooter with a few exceptions. The camera is moreover the shoulder view, keeping tight enough to the player that only the direction the character is facing is visible. Just like in Dark Souls, you’ll always want to be on the move, I died plenty of times from a Root sneaking behind me. The deaths do not feel cheap; and usually my own fault for getting too complacent within a level. As this is a shooter, the controls differ slightly for Dark Souls but also from other cover-shooters. There is no firing from the hip if you are not aiming down the sight the character will use the melee attack. I thought this would be a pain, but felt quite natural to do so.

Unlike other games that borrow from the soul’s formula, there is no block here, it is all about dodge rolls and stamina management. Only running and dodge rolls use stamina, so feel free to go crazy with the melee. The game is very generous with the I-frames (invulnerable frames, where an enemies attack will not connect while performing a dodge manoeuvre), unlike Dark souls that has a smaller window for a dodge. Don’t get me wrong, this does not make the game easy.

The name of the game is definitely not to loot, in fact, with the game’s design, it is possible to miss out on some loot all together. The game will dynamically generate a level, this in short means the layout of the levels will be different each time, as well as dungeon placements, enemy placements and bosses. It is very possible to miss loot as it was not in the campaign you are playing. It is possible to re-roll a campaign and start all over. Loot in the game is sparse and scattered, you might find two items in a level and that will be it. What you are after is the boss drop. These can be made into powerful weapons or mods and are worth the stress. I would have liked a more robust gear system with more choice, especially in the armour department as it all looks very much the same. The loot system is a bit of a let down, but I can see what the developers were going for where its more on individual skill than super overpowered weapons.

Remnant: From the Ashes comes alive in the multiplayer where you can join up to two others and take the fight to the root in a team. I felt the game was made for this sort of gameplay. I did not get to play tons of multiplayer as to enter a public game a ruin stone (bonfire) needs to be activated. You’ll have to wait for a player whose game you want to join goes back and lets you in the game. As the stone works the same as the bonfire in Dark Souls, all enemies are respawned. I would have preferred a jump in and out sort of multiplayer design, it would be far less frustrating. Once in the game, it comes to life. There’s no increase to the difficulty, but now you have help. Some bosses may feel impossible to beat alone but are beatable in a group. The game is at times just downright evil and it will very often send a wave of small enemies, then throw in a mini-boss or two just in case the game was not hard enough. This was another reason to play in a group as these moments are definitely aimed at group play. Everything is doable in single-player as well as multiplayer, its just harder. 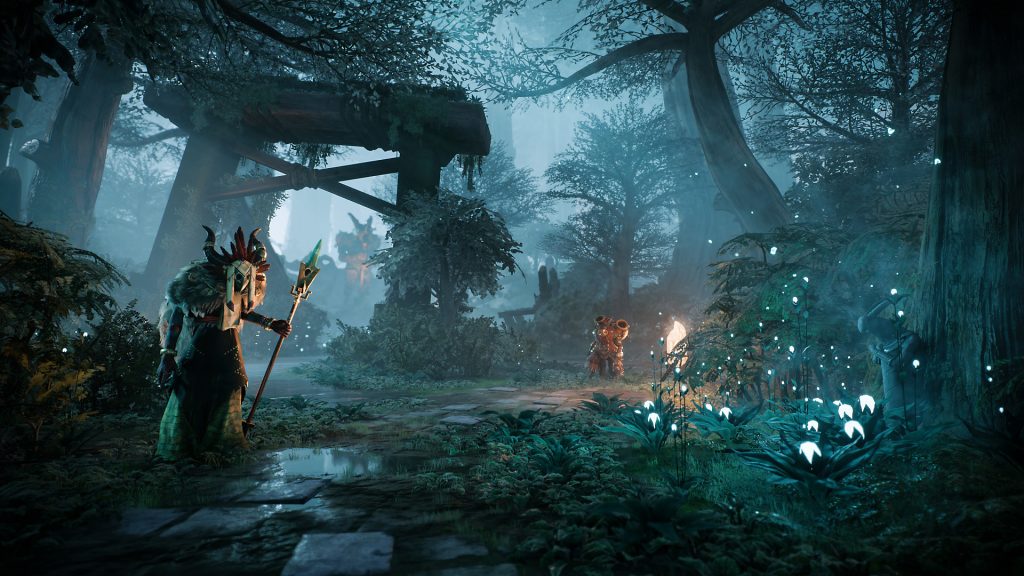 The visuals in Remnant: From the Ashes are a mixed bag to say the least. Individual elements can look good. Taking a closer look at the game as a whole it becomes a little choppy, with the way the game works some tiles don’t seem to gel together correctly. Making some parts look mismatched. These areas are not to noticeable and the game does a good job of matching most of the tiles.

There is a nice mix of the real world cities laying derelict and abandoned, with the root growing up and around the buildings strangling the life from the world. With the glowing red sacks that pierce the darkness and the gloom like warning lights in the night sky. You’ll encounter a variety of twisted monstrosities formed by the root, all unique and visually striking in their own way. The visuals give off an air of doom, defeat and loss, that really cannot be shaken, even in the hub world, there’s feeling of loss permeates the world.

The game starts to break down a little when you have played a few levels and replayed the same level. The game by nature is a randomly generated map, this means map tiles are going to be seen over and over again. For instance, in the first level, there is a road that has collapsed under a building making a passageway. Playing the first map a few times, I saw the same passageway each time but in slightly different areas. As much as I like randomly generated maps the fact you die so much wears the appeal down somewhat. There are a few textures that could have done with a bit more polish, but on the whole, the game is decent looking.

During my playthrough, I didn’t find any significant bugs to cause any problems. 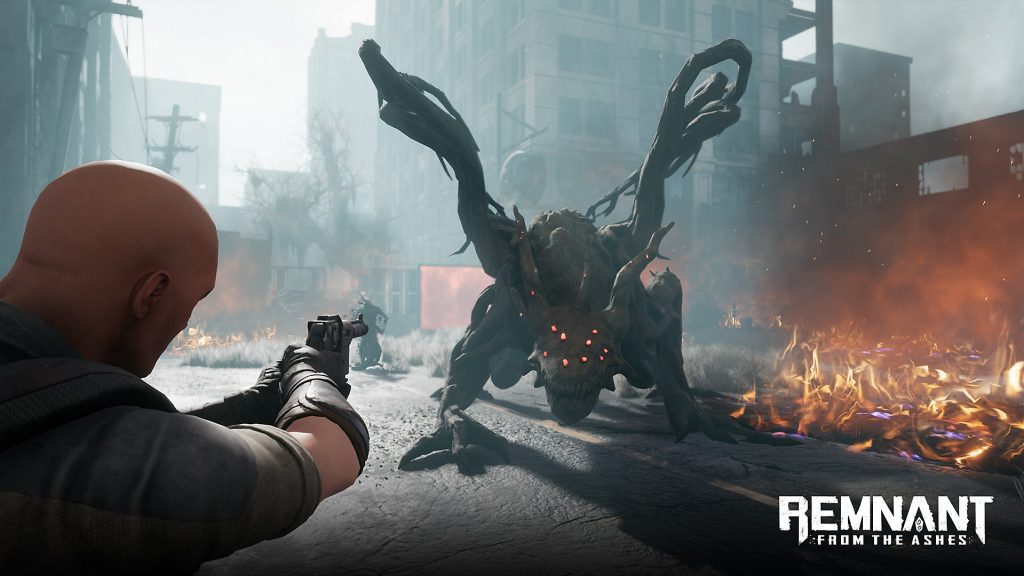 The sound design does a great job of finishing off the feeling of the world and adding to the atmosphere of doom within the world.

The sound design is fantastic, there is little to no background noise aside from the creaking of the root, I found this unnerving and added to the fact humanity is gone. While fighting, the guns sound and feel as if they have some real kick to them, and no two guns sound the same. When an enemy throws an axe and it flies by your face, there is a sense of that almost hit me even if you missed the visual cues for it. The best part of the sound design is the monsters and the root. Their constant chitterlings and noise-making, along with there own interactions with the world, makes it feel alive but not in the way we would like. The bosses sound tremendous, something you’ll need to experience for yourself.

There is voice acting within the game but it is nothing to write home about. The voice actors do a decent job but I was not blown away by it. The music is a mix of depressing feeling background noise to the more heart-thumping battle music adding to the stress of seeing the enemy running at you.

Remnant: From the Ashes does a fantastic job of sound design and making the world feel alive even if it is in wrong way. 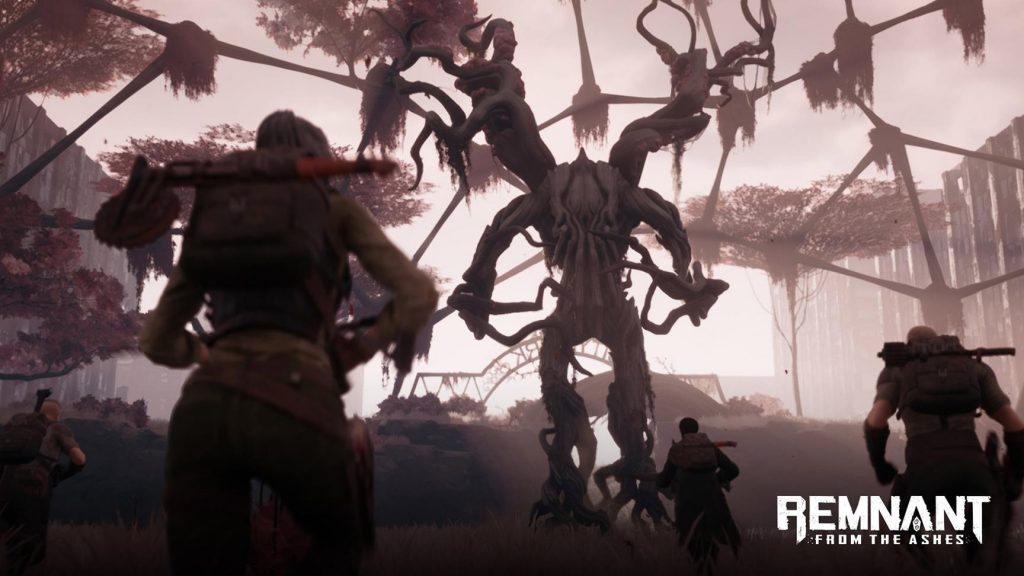 Remnant: From the Ashes for me was a massive surprise to play. The game plays great and borrows just enough of the Dark Souls formula that anyone who has played the aforementioned game will feel right at home. With gunplay and melee attacks that rival the best 3rd person shooter out there, this will appeal to the players that enjoy these games. Throw in co-op you have a winning formula for a lot of players.

I cannot recommend this game enough for anyone who likes these two genres, add in the price point I would say buy this one.
And remember this is not a shooter looter game!

If you like this review, check out our review of Hardcore Mecha (JP) HERE!