Redeemer, initially released on PC, is now available on all platforms with the release of, Redeemer: Enhanced Edition. A top-down action game where you punch, kick, stab, shoot, blow-up your way through hordes of bad guys. There’s a lot of killing going on. You take on the role of Vasily, a ex-elite operative who has escaped the clutches of his ex-employer and now taken a back seat from violence and corruption. Residing amongst the snowy mountains with his fellow monks, Vasily’s peace is about to be shattered as the evil corporation he once escaped have finally caught up with him. To be honest, I wasn’t too invested in the story, but that’s not to say other people won’t enjoy it. What really got me going was the fast paced melee action. 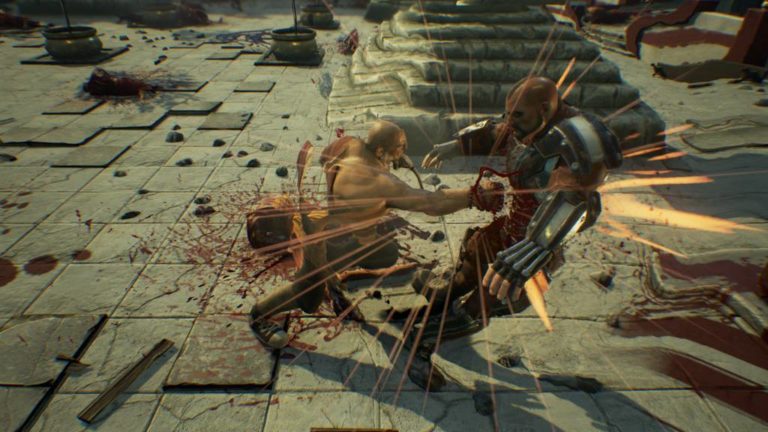 Redeemer really comes alive when we actually get into the gameplay. The melee combat is fairly easy to get your head around. You can kick or punch or even use a weapon to attack enemies. For me this is Redeemer’s strongest asset. It felt satisfying when taking on a smaller group of foes and beating some with your bare hands and then picking up a blade and bludgeoning the next. It’s a real over the top gorefest, and this is where it shines. The environmental kills are pretty cool as well, but none more so satisfying when you’re fighting a group of enemies. But let’s no forget the guns…

The gun-play reminded me of Hotline Miami, in the sense that you had limited ammo when you picked a weapon up, fire it fast and then discard it just as fast. Now, it’s not always like that, as you will find weapons throughout the levels. A lot of the time though it’ll be during a frantic battle, where you blast one or two away with a shotgun, pick up pistol and unload it, then finish the rest off with an axe it is quite similar to Hotline Miami again. There is also an option to do stealth kills on unsuspecting enemies. Honestly, it feels a bit tacked on. The first couple of stealth kills, feel like a set up. Most of the time it felt like just a cool way to initiate a mass brawl. I don’t think the levels were designed for that time of play, and creates a major issue later in the game, where a lot of the mechanics kind of get thrown out the window anyway… This won’t be the last time you see this in a game either. With a lack of variety in enemies, there was always going to be a challenge to spike up that difficulty curve. And as many developers have done before, the answer seemed to be to cram the screen with as much enemies as possible. The one positive you could take from this, is the game goes back to what it does well, and gets you punching, kicking and stabbing again.

As you fight your way through the game, you will also earn upgrades. These can be earned by performing your variety of attacks, for example, if you punch a lot you’ll increase its ability. As you increase an ability you’ll unlock perks that you can use with said ability, like a charging punch. By finding hidden manuscripts and tablets you’ll also be able to upgrade an ability by one.

Redeemer has a couple addition modes besides the solo campaign. There’s the Arena mode if you want to blow off some steam and kill relentless waves of enemies, and there’s also the co-op mode. I really enjoyed co-op, it’s always a good option for a game like this – think Diablo co-op – and I felt it was actually a bit more fun with a buddy, especially later on when it gets a bit more frantic.

Finally, the length of the campaign was around 7 hours. Fairly decent play of time. 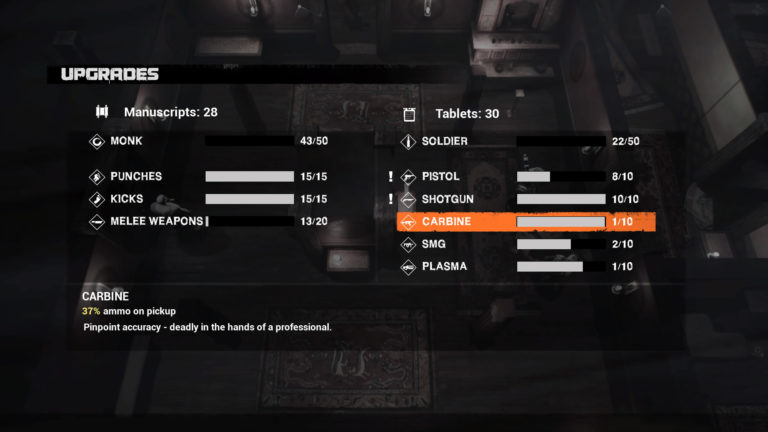 Visually the game looks okay. There’s nothing here that will make you go wow, and some of the textures can look a little washed out or a bit blurred. There’s a lot going on in the action parts that means you’ll never actually care enough about how pretty it is anyway. The in-game cut-scenes are a bit better, presented in a kind of comic book fashion.

The game itself ran smooth enough, and maybe this is why the graphics have been slightly toned down. You’ll see why later on in the game when your screen is filled with enemies!

I did encounter one bug a few times, falling through the map. Actually, the first instance I encounter this was the first mission or tutorial level. I actually rolled off the map stupidly by mistake but instead of dying, I was merely allowed to run around the bottom on the level which meant I had to manually restart. This happened around twice more, both when attacking an enemy near a wall, my character just kind of fell through it. 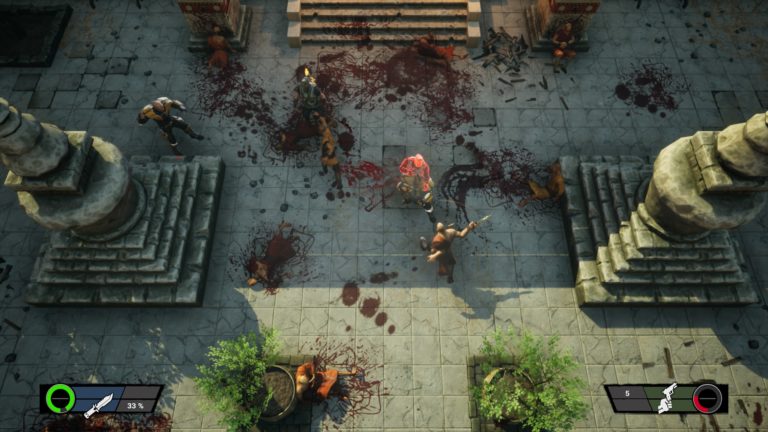 Just like the visuals, sound design doesn’t stray to far from also being a bit bland. It’s not so terrible it becomes off-putting, just uninspiring. The game has a bit of voice acting in it, which is decent enough and the music does an okay job. 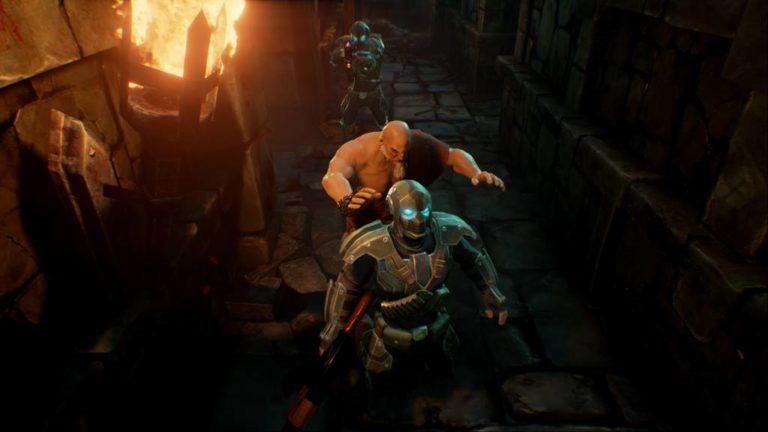 Redeemer was at its best when it was kept to the simple beat ’em up with blood and guts everywhere. Simple and fun, but as you progress through the game it kind of gets lost. I just feel there wasn’t enough depth within the game to try and enhance the combat formula. Whether down to level design or lack enemy variety, it just never found it’s way back.

I had a decent time with the game, I just wish more focus had been used to refine the weaker parts of the game.