Professor Lupo and his Horrible Pets is a fun, enjoyable and at times charmingly frustrating sci-fi puzzle game developed and published by BeautiFun Games. It centres around your character “Intern” as you aim to evacuate the grand space-ship named the Aurora just after it has been bombarded by missiles from a suspicious force. As the ship becomes overwhelmed by the escaped aliens captured by Professor Lupo on his travels throughout the galaxy be prepared to face fierce and at times cute relentless creatures motivated by hunger and rage as you and whomever is lucky enough to still be alive attempt to make it back to the safety of earth. Along the way learn more about the ship itself, your own past and who knows, maybe pick up one of the many collectibles!

If the title itself doesn’t draw you to the game then maybe the intriguing and unusual story will. As mentioned above your main objective is to find a way back to earth and away from the ruthless beings that want to devour you. The game starts off with the title screen presenting in a classic sci-fi 80s/90s nature, like a computer screen from that era, we then see a starry sky and a protruding space ship containing what looks like an audience of people before we meet the man himself – Professor Lupo. He presents like a scientist and has the top notch voice acting to accompany this. He is selling the creatures he has captured in auction to “the conquerors and tyrants that have divided up Earth”. The demonstration begins where the “Intern” is used as bait to show the capabilities of the critters. It’s here we are shown the game’s mechanics, it works off of a tile based system where your main objective is shown by an illuminated teal tile, a left mouse click is used to select which tile you wish to travel to, while you can open and close doors that have a circle above them, useful when it comes to being chased by the aliens.

Before the bidding can begin a computer named Plato informs us that missiles are coming in fast to the Aurora, and before you know it you’re own your own, well in a sense, Plato chimes in every so often. Now the grafting begins, there are five chapters and numerous levels to complete, along with various collectibles to collect including books, games, music and films (not needed to progress, but a very cool aspect nonetheless). There is also a nice archive section in the menu which will provide information on the aliens, e.g. anatomy, in addiction it records the collectibles you have managed to scavenge.

There are a variety of aliens in the game, each with their own strengths and weaknesses, you can use these to your advantage as you are a pacifist bait, walking is away from them is just as practical as running (in reality it really isn’t they will eat you then you’ll turn into a pile of goo). Plato is a really nice addition to the story as well, along with his robot voice, he can be quite humorous at times when discussing the best route and the probability of dying as a result. As you progress through the levels it becomes more and more challenging, the aliens become more advanced in mind and quantity and the door mechanisms become more intricate along with the methods of disposing of the aliens. As such tactics are very important, a simple zoom out before you move anywhere to determine the course of action can save you from dying multiple times (I learned this the hard way). 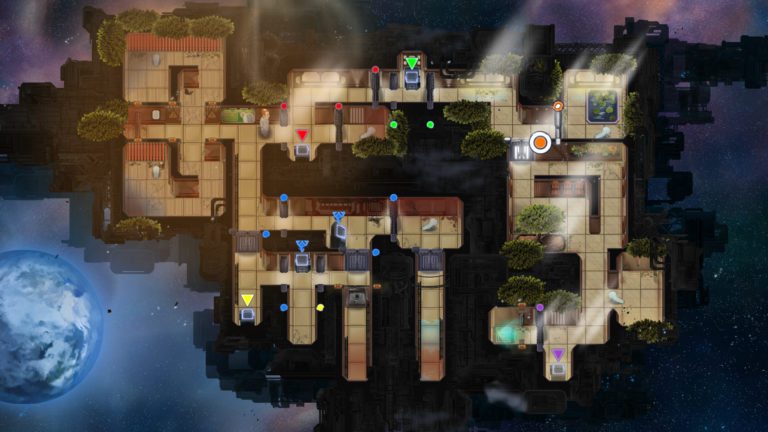 The cartoonish nature of the game makes it an enjoyable experience, I can appreciate the details that went into creating the characters and the aliens, each is different to the next, crisp, clean and colourful. The same goes for the cut scenes, these are short and to the point with no glitches or framing issues.

The game menu has that space fiction vibe and is very easy and simplistic to use. Combine this with the straightforward controls for moving your character, navigating the space and completing the levels your in for an interesting adventure. 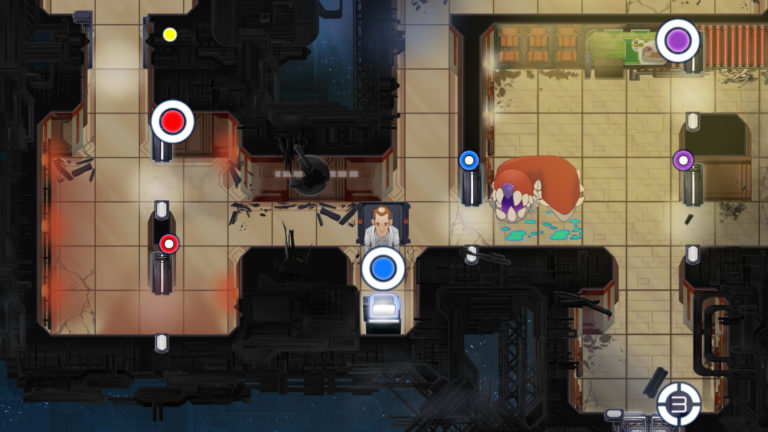 The game does an excellent job in terms of sound design, it is able to blend sci-fi with a mix of eerie, mysterious, thought-provoking vibes in order to deliver genre appropriate music suitable to the narrative. I also appreciated the little sound design details that went into the game, whether it be the simple sliding of doors, noises as the aliens move, the shriek the intern makes when caught by a creature or the creepy music that accompanies each level.

The voice acting as mentioned before for Professor Lupo is great, it really gives you a sense of the type of character he is and what he is capable of, same for Plato. That said the voice acting for the Intern is decent, but is not as imposing as Professor Lupo’s is, the same can be said for a few other characters in the game too – they just don’t feel as dramatic or striking.

Overall, Professor Lupo and his Horrible Pets is entertaining and intriguing puzzle game. I enjoyed how the game’s narrative was introduced and how it developed over the levels and chapters. It was interesting how each level was different from the last and the next, however at times it did feel quite repetitive, but with the type of game this is it does well for having as many levels and chapters as it does. The characteristics of the aliens (their capabilities, downfalls and designs) made it even more enjoyable to play. I did have to take a break every so often when I couldn’t figure out how to progress to the next level, nonetheless, this just made me want to play it more due to the satisfaction I’d feel when I finally got past it. It also goes to show also that you must use tactics and time your decisions, it isn’t a game that you can just figure out each level as you go along, you do have to plan, and if you don’t be prepared to die… a lot.