After Sword and Shield released on the Nintendo Switch at the end of last year, and with the general hype still in full swing, I was not expecting another Pokémon game to be announced, let alone hit the shelves. Yet it happened, because just a few short weeks ago, a remastered version of Pokémon Mystery Dungeon Rescue Team DX was launched. I say remastered, but perhaps reimagined would be a better turn of phrase.

Game type semantics aside, this game differs from the more commonly associated ‘gotta catch ‘em all’ games and was greeted with a mixed reception both during the launch announcement and at launch.

Still, having not played many of the older games, I was interested and excited to try my hand at this title.

How did it far? Were the jungles a thrilling adventure, or was it a mystery how this game got made? Let’s take a look right now. 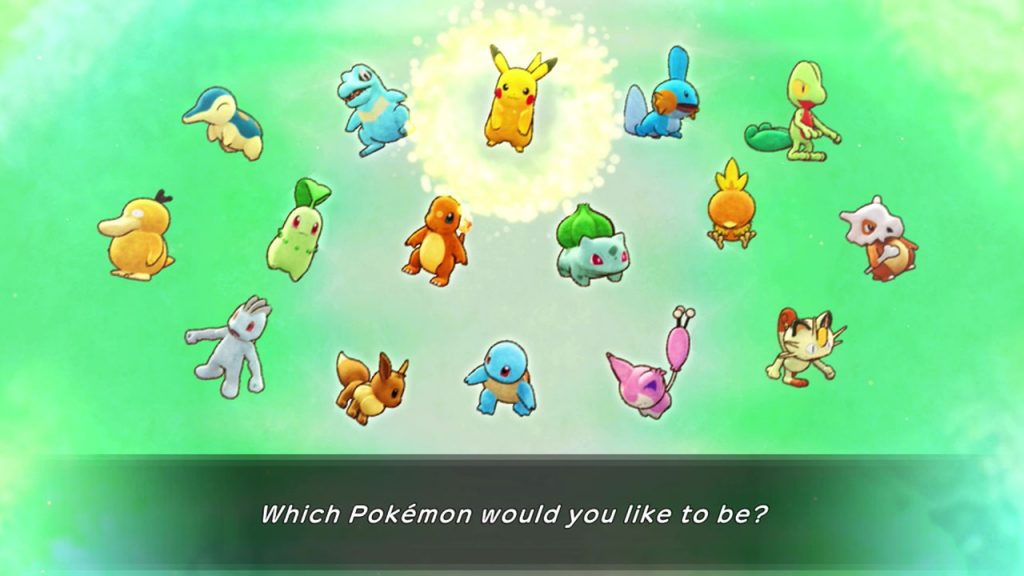 The game is played from a top-down perspective, and is, for the most part, set inside different dungeons. Each dungeon has multiple levels, and depending on the question you are undertaking, you will need to reach differing levels in order to rescue the troubled Pokémon and complete said mission.

You can pick up multiple missions in one location and complete them back to back, but it is very much a one location per day kind of deal. There is of course a storyline running through the game, but the basis is weird events are happening, Pokémon are disappearing, and it is up to you to save the day. The story here was certainly more prominent and, in my mind, more engaging than the Sword and Shield story.

The big difference here aside from not having to catch Pokémon. Well, in this game, you are a Pokémon. That’s right, you pick from one of 16 starters. However, rather than just giving you free choice, the game poses you a list of interview style questions, and based on the different answers you give, the game will suggest a Pokémon for you to use. Of course, you do not need to follow this advice and can then pick any you want, but it was a nice way to start things off.

Overall, I did find that the game got a bit too repetitive a little too fast. I have not played the other games in this particular series but have seen more than a few streamed runs of them to know that this game seems to stick very closely to the rules of its predecessors. The controls were a little clunky, especially as your rescue team grew. You could go into each mission with a team of three, but as you rose through the dungeon floors certain defeated Pokémon would join you group for the remainder of the mission.

Moving through the dungeons was fun, and the battles were a nice alternative to the more traditional fights from the mainstream games. However, I just felt that even they grew too tiresome as the game went on. Linking moves together into double hit combinations was fun, and to be honest, I do want to play the game again and see what sort of combinations I could come up with.

One thing I did like, but also found oddly frustrating, is the online rescue. If you or your friends were in trouble (you team all fainted inside a dungeon) you needed to get them rescued. This could be done by asking a friend or other random online individual to come and rescue you in exchange for a reward. Part of this involved creating an incredibly complicated 30-character password. This combined numbers, letters and symbols in four different colours and went someway to affirm that Nintendo still don’t full grasp anything when it comes to online gameplay.

I think the lack of interest in the game also killed this aspect, as on the two occasions I needed rescue (once for the purpose of review and once because I just had a weak team for the mission), nothing happened for days and I ended up assembling a second line team of my own and rescuing myself. A godsend as otherwise the game is essentially over at the first time of failure. 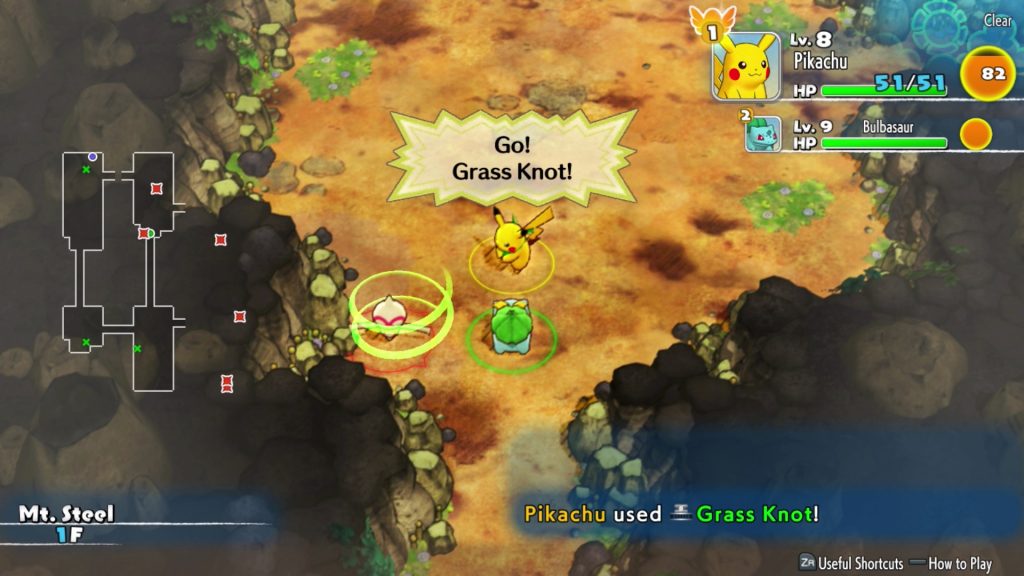 The game is beautiful to look at, and in my opinion is one of the best-looking Nintendo games I have seen. The game play offers a third person view from a fixed camera angle when you wander to overworld either visiting the camps that house your fellow rescue team members, or the local marketplace where you can visit a plethora of shops and businesses that provide all manner of things to help you on your journey. Then, then you enter the dungeons themselves, you swap to a top-down view.

I really liked the layout of the world and the look of the Pokémon both in and out of the dungeons. I did find that the dungeons themselves became somewhat samey after a while. Which was to be expected but at the same time didn’t help ease the repetitive nature of the gameplay. 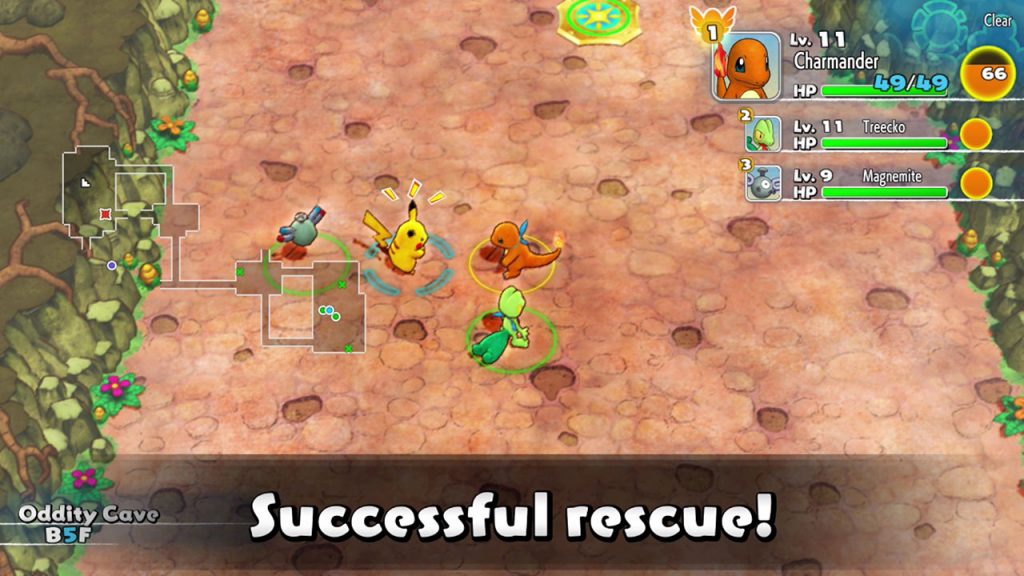 The games music was fun and jaunty for the most party, with predominantly instrumental pieces. However, while fun and largely upbeat, they become repetitive and many of the different tunes began to blend and sound a little samey. Overall, it leant to the general feeling that this game, while beautiful on the surface, I can’t help but thing it was maybe rush a little. I just can’t fathom why because Sword and Shield were still fresh, and nobody was clamouring for a new Pokémon title. 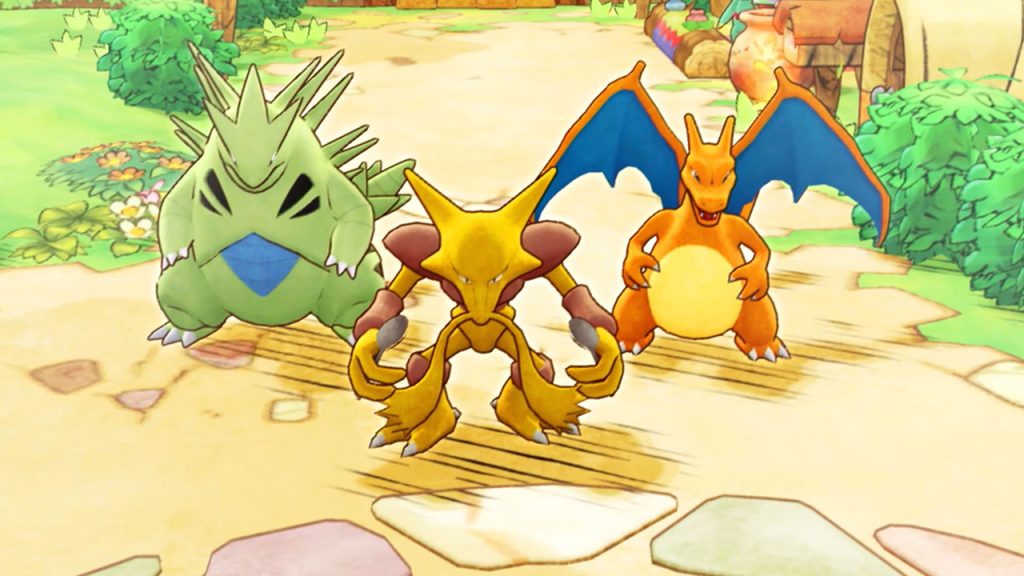 Perhaps a lesson learned or maybe just a misstep in launch plans, but I can’t help but think the world was neither ready for nor needing a new Pokémon game so soon after the launch of what are, without question the mainstream style of games.

These ‘alternative’ Pokémon titles, while fun and entertaining are often more catered to the dedicated Pokémon fans rather than general gamers, and this launch may well have acted as a nail in the coffin on these additional titles all together.

If I look around, I saw very little chatter at launch and what there was disappeared pretty quick. You can bet now that Animal Crossing is out, Pokémon Rescue Team is all but forgotten.

It’s a shame because this is a fun game. But I would have liked to have seen something extra to really make it an investable experience. One you could happily sink hours into rather than think, ok get out of this dungeon then we can go play something else.

If you enjoyed this check out our review of Snack World for more dungeon Crawling HERE!