Penguin Wars was initially released back in 1985 as an arcade title. It was then ported to the Game Boy and later the NES under the title Penguin Wars and believe it or not it was called King of the Zoo in Europe and Penguin-Kun Wars vs in Japan before having that name change. Now it has been bought back from past and released on the Nintendo Switch… has it evolved from a time gone by or has this penguin bitten off more than he can chew?

Penguin Wars is an arcade-like sports experience on the Nintendo Switch. With some new features added but retaining its core gameplay mechanic of throwing balls down a playing field. The main objective is to hit the player on the opposite side, rid there side of its balls to score points.

The story in Penguin Wars is very light-hearted and doesn’t impact gameplay or make all that much sense.

What I can gather from the quirky intro and rocking jazz tunes is Riley our main hero wants to venture to a faraway place known as Gira Gira land… From the look of the poster he holds in his hand, it looks like a theme park. Riley decides to start training, changing his personal style to fit his more cooler persona. As well as fixing up his run-down vehicle into the fabulous Giragira lorry, which can transform into large playing field were Riley and others can play their volleyball like tournaments.

Riley begins his journey as he drives to 5 different locations around the world until he arrives at Gira Gira. All the while meeting a bunch of different animals and challenging them to play various challenges, tournaments in his transforming lorry. 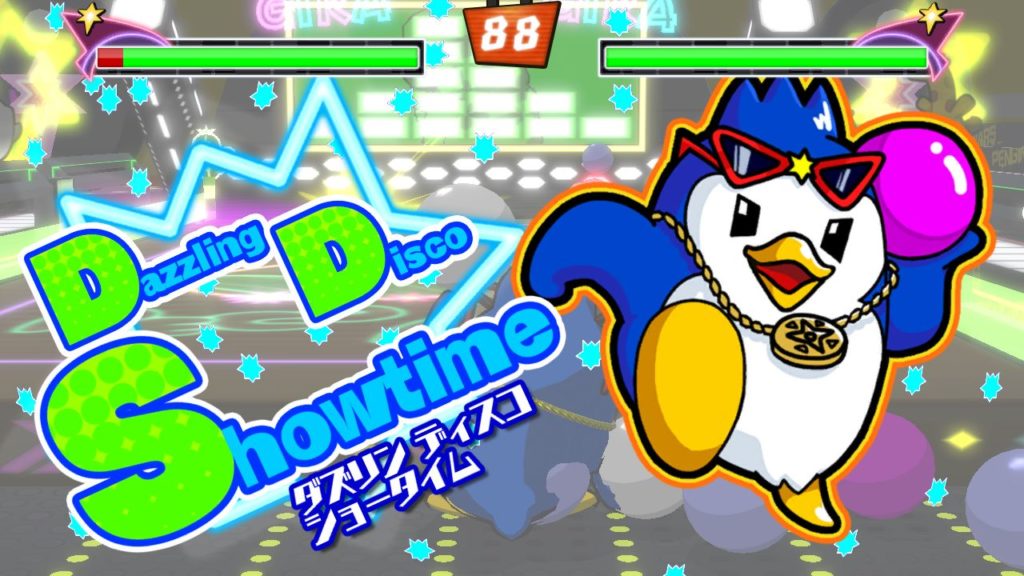 Before we get into gameplay lets talk about controls: to move around your side of the playing field, you need to use the left analogue stick. Walk into a ball and press A to pick it up. Arrow will appear showing you the direction you can throw it in. To pick up a ball simple press the A button near it to pick it up. A red arrow will appear showing you the Pressing the B button will allow you to quick dodge dodge which is helpful avoid attacks. Pressing, and holding the Y button allows you to do a charge shot, possibly knocking your foe unconscious for few seconds if they’re hit by it.

If you fire all your balls and they’re over in the opposite side of playing field. An instant ball attack will occur, damaging the other player. Try to keep as many balls out of your court side; otherwise, you will suffer the same fate. Points can be earned by knocking out players health gauge,  getting rid of all your balls before the timer expires. Of course, your not totally defenceless as very similar to Mario tennis each character has two unique Gira Gira moves. That can be activated once there Gira bar is full. Two moves can be activated either by holding a ball or moving without one by pressing the X button.

Controls work fine, and I didn’t have any real issues with it.

Before talking about the main campaign lets take a quick look at different modes available to play from the get-go.

Vs mode locally – this mode consists of two options: Normal battle for up to 4 players. You can also play this mode in single player, watch CPU characters battle it out if you want to. There’s also Face to face battle option for up to 2 players. After selecting one of these modes, you can pick any character from the 6 characters available. And choose if want team battle or one vs one, choose CPU difficulty. There is even an option to pick what music tracks you get to listen to as well as the rules which consist of 30 different types of scenarios you can select — giving you lots options for diverse matches which I like.

Internet play – here you play Penguin Wars online with random people or direct battles. Any upgrades from the main campaign will be taken into this mode. You can select all the characters, but note if you haven’t levelled up certain characters in story mode they won’t have any upgraded abilities here. I’ve played a few matches, and they were pretty solid, but it did take a while to find them.

Extra mode – is basically just a survival mode, against multiple other CPU animal’s with multiple different rules. I found this mode exciting at first but it did not hold my attention for long.

DLC – Surprisingly, there is a single DLC pack available to purchase on the Nintendo Switch eShop. It’s a character DLC pack with 4 new hebereke characters and a new cut-scene. Characters can be played in both local vs, and online play. The characters have their own unique moves and Gira Gira specials. This pack is currently priced at £4.49.

Upon starting up main story mode, you are greeted to the main story menu here. You can access a few different actions. You can select your world from the tab in the top left hand-corner (Once unlocked.) You can select the challenge tab that will present you with multiple options displayed on the side of your lorry. You’ll see ether challenges, 1-vs-1 and chance matches which pit you against multiple foes which can be quite challenging. You can even buy balls in the shop here too.

Successfully defeating these enemies in chance matches will reward you with gold coins, lollipops but, more on that later. Completing a chance challenge will also reward you with a sticker. There are 10 to collect in each world. Collecting them all will reveal a boss encounter. Complete this, and that character will join you, and you’ll be able to level them up in the camp tab.

Camp – has 3 options available – History allows you to view all cut-scenes again. Ball will enable you to set pre-set balls you want to use in battle. More balls will be unlocked as you progress, balls can also be bought from the store. There are 72 story balls to unlock and 48 internet balls to unlock in the online mode. You can set up 4-presets here too.

Status – allows you to upgrade anyone of your unlockable characters. You can upgrade ball speed, power, defence and movement. It is were gold, and lollipops come in, with each upgrade requiring a certain amount of each before the update can be implemented. 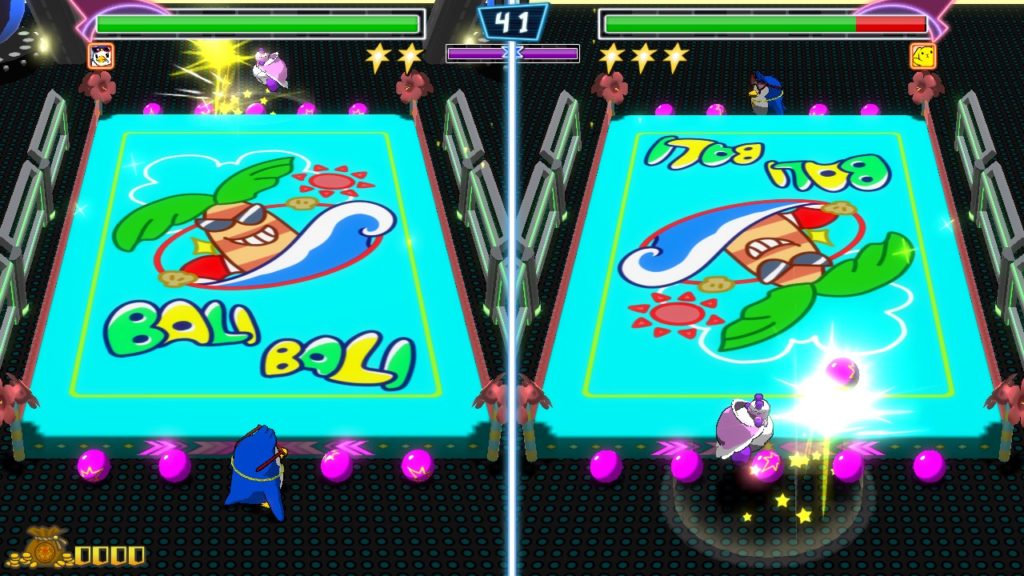 Graphics in penguin wars is extremely bright and colourful and in your face! It really pops off the screen with its vivid colour palette. While graphics aren’t detailed, they do have a very cartoon look to them with everything being outlined in black lines as if they been drawn into existence. This style will appeal to younger gamers. Some of the other effects such as the audience members which are all 2D cut-out animals look rather strange compared to 3D main characters, but to be honest, in this crazy world of Penguin Wars everything fit this psychedelic sports title well. Colours pop off the screen. 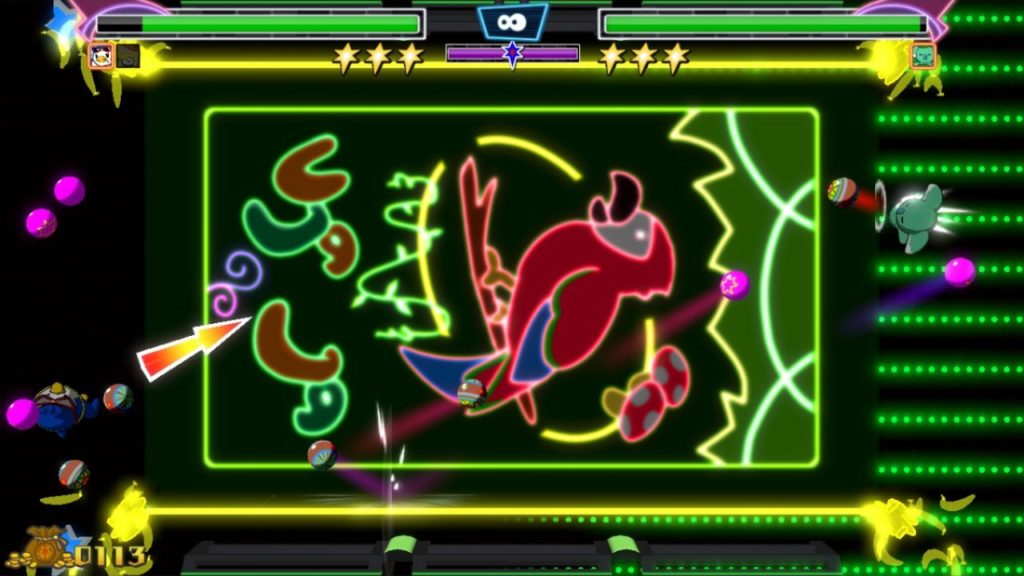 Your eardrums will be hit with a blast of classic jazz tunes that are upbeat, toe-tapping. Which was a defined surprise. There number different tracks as well as some standard club-like beats, but it all fits the hectic nature of this title pretty well. 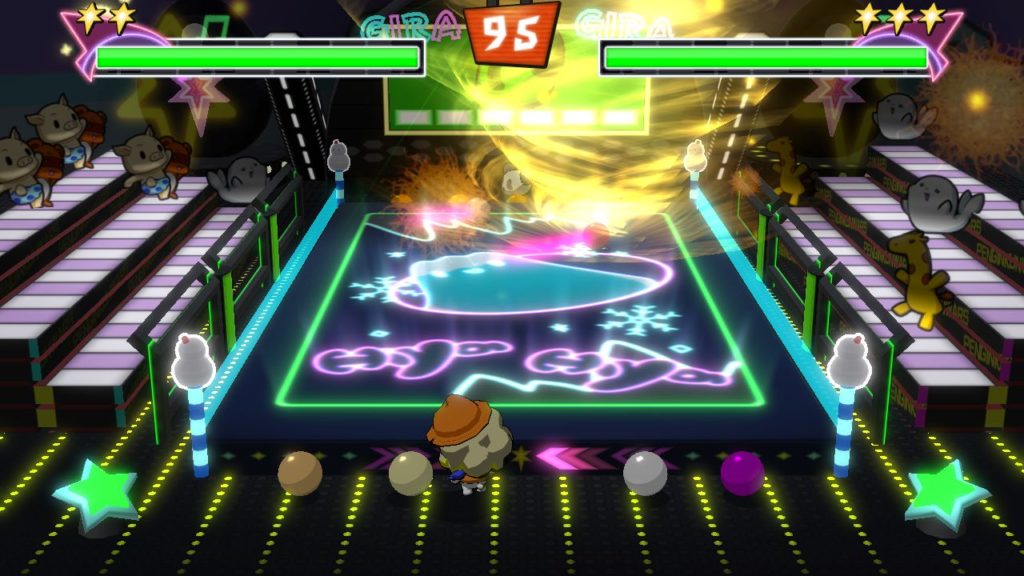 I can’t deny that Penguin Wars is really fun local, online multiplayer game on switch. The game comes into its own when you have 2 to 4 players throwing balls about -chuckles to self- and it can be a right old laugh. Throw in 30 different rules, and that can really change up each match.

The main campaign has a lot of challengers and things to unlock but can become a little repetitive after a while. But it is worth playing through as it can unlock, upgrade characters to use in the online mode.

My only real gripes are online is pretty dead, which is a little disappointing, and I can’t use the video capture ability in this title. Thankfully local vs couch co-op or head to head battles are a good time.

The game is not that expensive either and will prove hours multiplayer mayhem.