Omega Labyrinth Life is set within the Anberyl Girls Academy, you play as Ania Akemiya, a transfer student. She is in search of the “Holy Grail of Beauty, “it is said the grail will grant any wish. It is said that the grail is hidden in the mysterious cave that is only accessible on the school founding day. The Wish Ania wants to make is to make her breast bigger as they are smaller than most other girls.

When entering the cave, Ania meets a fairy called Pai, who explains the power of Omega that will enlarge her breast the more monsters she dispatches as well as the Omega Power will make her stronger. After leaving the cave, the crowing achievement of the Academy the Garden wilts and every flower dies. Ania makes it her mission (as well as find the grail) to repair the garden and make it beautiful once more.

The story is actually reasonably good serious fan service throughout but looking past that the story and the characters are written well. As you could tell by the story, is this game is not for kids, and that is just the tip of the iceberg. 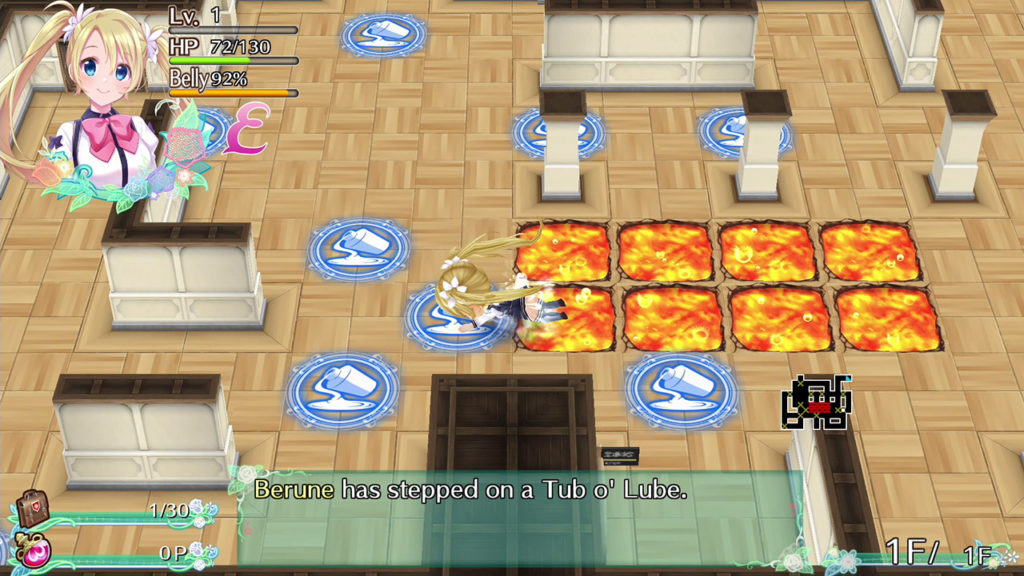 The gameplay has a few elements to it, and there is a lot to unpack, be warned most of the growth gameplay involved almost naked anime girls and touching them in their sensitive spots. You have been advised to continue at your own peril.

Omega Labyrinth Life, has an element of time, like a lot of school-based games, here the time will change the quests along with with flower growth also some events. The timing is very generous, I never felt rushed to complete actions just to be back for a particular time. It felt more like the time was there for the flowers really, and other time stuff was just tacked on

Now let’s start with the hub world – Anberyl Girls Academy, here is where the main story will unfold and where Ania will get main and side quests. The Academy has a few areas to unlock as the game goes on, each area will unlock new things to do along with more side quests. At the beginning of the game, Ania has access to the garden, the shop, the save point, greenhouse and acroterial room. With plenty to unlock as the game progresses.

Here are a few of the more ‘interesting’ aspects of the game;

Garden – The garden is where Ania needs to plant seeds she finds in the caves and water them, and harvest the seeds and nectar. Once the seeds have been sown, by selecting a plot and they seed type, then it is time to water them. There are different types of water to use, each with their own properties, One will increase the number of seeds harvested, while one will increase the growth speed, for example. Along with the gardening (that is a large amount of the game), there are decorative items called Curios, that can be swapped in and out once bought. Nectar has a [urpose within the game that’s coming up..soon (hope you are strapped in things are going to get messy from here on out).

Appraisal – I figured let us start off simple. When in the cave dungeon-crawling some items need to be appraised as in most RPG games, however, it will not be a magic spell or a writ of identity this is Omega Labyrinth. Let’s get things started with how items get appraised, simply put you pay omega power to, put a phallic-shaped Unidentified Crystals, between whichever girl you want and giggle their boobs. Until the Crystal is stimulated enough to explode into a white light and reveal the hidden item. This is just a warm-up…ready for more?

Skill Blooms – For this activity, we head over to the Green House. You will need to use nectar to improve the skill you have bought from the shop. Seem innocent enough, you are forgetting what game you are playing. To increase the skills, it is up to the player to touch the girl in the right places to make her moan and get excited. After hitting the sweet spots, Full Bloom (a flower appears on the body) will activate making the whole body the sweet spot. Keep tapping till the girl till she makes everything wet. This will increase the EXP and eventually the stat of the skill, dependant of how much nectar was used. Nothing is wasted here, the drips from the screen are collected and used in the garden to ‘water’ the plants.

Hot Springs – In the dungeons you may come across hot springs, these serve the purpose of healing your characters mid dungeon. Also, you are shown a picture of the current party leader in the Hot spring totally naked and so strategically placed steam. If you wish you may interact with the girl (if you want that is…I never did – Honest)

This is just some of the things you are to be treated to in the game.

For myself I love dungeon crawling games, here we have a reasonably competent one. Does nothing out the ordinary for controls you move the enemies move, you can aim and walk diagonally attack with the equipped weapon, and there is also an option to throw things… okay everything if you please. You will not find anything new with the control. I have repeated this time and time “if it ain’t broken, don’t fix it.” The game is a rogue-like, so entering the dungeon, each of the two-party members will start at level 0 and build the way up by defeating monsters and collecting EXP. Levelling up will increase the overall stats of the girls. As the dungeon progress, the girls will find loads of loot, however, the girls only have a limited amount of inventory space. These spaces can be increased by finding purses that will add extra space depending on how many are found. If you are unlucky enough to die in a dungeon, say goodbye to all the items you have collected. There is a GPS item you can buy from the store. that when attached to an item, will keep the item in the inventory when knocked out in the cave

Like in most RPG there is equipment to attach to the playable characters, here is no different….well a little bit. There are weapons and off-hand shields, hats, boots, knickers and bras. Underwear can have buffs attached to them and sometimes a set bonus. So making sure the underwear matches is important here. As the girls travel the perils of a dungeon, they will get hungry, if the hunger meter hits zero, the girl will start to lose life till she eats or is knocked out. When knocked out the party is kicked out of the dungeon.

Along with the normal dungeon, it is possible to venture into a challenge dungeon. These strip you of all your equipped items and weapons and task Ania to get from one side of a room to the other without being killed you are rewarded with omega power, items, and so on.

There is so much to talk about in the game. I have not even touched on the Mini games like Tit for Tat. Basically Rock-Paper- scissors with boobs.

The game is something that you do not really want to play in public in handheld as it may result in some funny looks. With the number of moans and groans of the girls. Not to mention if someone peers over and you are appraising a crystal. Did I tantalise your taste buds and tickle your fancy? There is still loads to discover, but I won’t spoil too much. 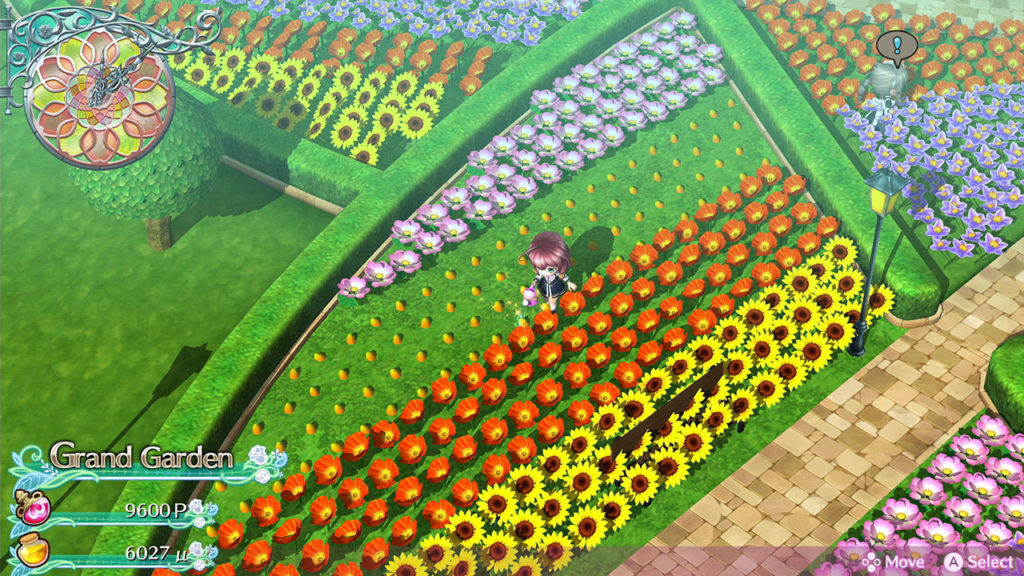 Omega Labyrinth Life’s Visuals are not the best, this is due to being a PS Vita game to start with. There is something about the in-game graphics that are cute, maybe its the anime style Chibi characters and enemies or the bright colours, or a combination of both, it just screams cuteness. Character model looks decent but feels a little stiff when moving. Along with the Chibi style in-game models, there are Visual Novel style drawn characters when in story cut scene or side quests. These are great and well drawn. Lastly, where are the interactive pictures, these are done in the Ecchi style. Ecchi is when the drawing is made in provocative poses, for instance.

The game is lovely looking if a bit basic looking in-game with some really great hand-drawn model. Just don’t let mum see, it will get a little wet. *wink, wink*

With my time in-game I had no problems of note, every now and then some load screens felt a little too long but nothing really. The game ran smooth. I preferred to play this in handheld as there is plenty of interaction with the girls, and it was easier. 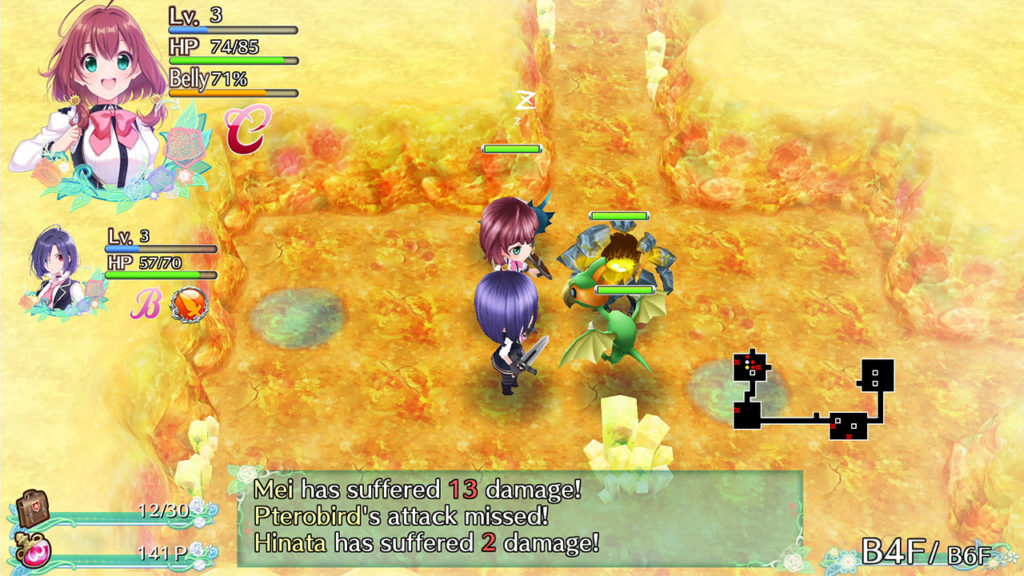 Omega Labyrinth Life’s sound effects in the caves are decent nothing to rave about. They all serve there purpose but do not excel at them. A sword swing sounds like a generic sword swing. There are no real ambient or interactive sounds as I said it works but does not excel. The music in the game all light-hearted and upbeat and something I would like to listen to outside of the game its self. The intro song is so J-pop it is unreal, and I LOVE IT!

The voice acting is the star here, (this seems to be the case with most games like this) each of the voice actors does an outstanding job of breathing life into each character, giving each character their own distinguishable personalties. From the happy go lucky super positive and hyper Ania, to the dark sounding Saeri Soja. The actors are so varied and of very high standards. Also, as this is an overly fan serviced game, there are a lot of moans and grown, these do not feel tacky but for some reason fit. I am guessing as it is the type of game.

Overall, Omega Labyrinth Life is a decent dungeon crawling rogue-like experience. It does almost everything right as long as you don’t mind Ecchi content. I personally enjoyed this game for what it is, the Ecchi stuff is entertaining at the start but the amount it is used you will quickly get desensitised to it all. This is not a criticism just like with most games once you use a game mechanic a few times it is only part of the game no matter how amazing it is.

This game is more of a niche title as the game mechanics will put a lot of people off (even my fellow writers here at Review Rush). If you are willing to give it a try, then you will get an excellent well-written game. I really enjoyed my time with Omega Labyrinth Life.

If you liked this review check out our Super Neptuina RPG review HERE!