Obakeidoro (Bogey Run) is a 3v1 asymmetric single and multiplayer game. Think Evolve, Friday the 13th, and Dead by Daylight. The game follows two kids named Alisa and Alex who find themselves left alone during a blood moon.  During the blood moon, Monsters awaken to capture humans and throw them in jail. You and 2 other friends play as humans trying to survive 3 minutes without the entire party being caught by the monster. While 4th person or the computer in solo mode plays as the monster trying to capture all of the humans within the 3 minute time limit. It’s the classic cat and mouse game that lacks and in-depth story, but is a lot of fun when played with friends.

The gameplay loop is pretty simple.
As the humans, you have to try to make sure that someone in your party remains free for 3 minutes.  If you or a teammate gets captured, then the monster will place that character into a cage in the center of the map. It is up to the free character(s) to release their partner from the cage by opening the required amount of skull locks. Each character carries a lantern that serves a few purposes. They can stun the monster giving you a few seconds of safety to run away and find a new safe zone, but they also illuminate while you are standing or moving giving away your location. Crouching turns the lantern off making it a little more challenging for the monster to find you. Remain free by sunrise to free yourself of the blood moon Monster!

As the Monster, you must search for the humans throughout the map. Avoid obstacles like flashing lanterns by the humans and going through buildings. Although you can go through buildings, they drastically slow you down. You do have some advantages as the Monster. Such as Ghullies, they drift through the stage and if they see you, they will point to human’s location . This discourages players from camping and keeps the game moving. The monster also has an audible advantage. The music changes whenever you are near a human adding to the drama. Once you are in position, press the Y button to capture the human and send them to jail. Keep in mind that only your hands carry the human to jail. The monster will remain in the location that it caught the human meaning you will have to wait until your hands return for you to be able to continue the hunt.

Catch them all before the blood moon sets to win!

Playing as either human or monster, earns you Fine Play points. Humans are in Fine Play whenever you hide really well and escape from the monster. You also receive points every time you rescue other entrapped humans. Monsters can also earn FP points whenever you catch a human through the wall, avoid lanterns, and win a match.

Coins earned through Fine Play can be used in the shop. Items available in the shop range from Upgraded Lanterns for the humans,  to new and upgraded Monsters.

Coins are not the only thing that you can collect. As you play, you also collect stamps to place on cards for both humans and monsters for completing certain tasks in the game.These are essentially in game achievements.

One thing this game does not lack are options and alternate menus. Here are list of options available with some details of each.

Main Menu:
2 modes of play
Online Multiplayer
Local Play for solo play or up to 4 players.

Shop Menu:
The shop menu is broken up in two sections depending on which character you would like to upgrade.

-Lantern Shop has different lanterns that have different skins and upgraded skills in Speed, Range, and Stun. Some lanterns can only be purchased after you unlock a new grade.

-Monster Shop has different monsters that can be purchased. You start the game as Patches. Other monsters like Grumpkin (a pumpkin vampire), Brutus Lupus (a wearwolf ), and Krowe King (A king frog… not really a monster) are unlockable. There are nine total characters in the shop. Brutus Lupus is the only unique character, while the other eight are basically upgraded versions of themselves. For example Ransack is an upgraded version of Patches.

My Data Menu:
Data information is split between Human and Monster. Within each menu you have tracked information like, Online Wins, High Score (Single), capture count for monsters, rescue count for humans, and times played as each character.  Each character will have a ranking and it shows you the number needed to be reached in order to move on to the next rank.
In the Data menu you also have your stamp cards for humans and monsters, and a 3rd category for General Stamps. (Your achievements) 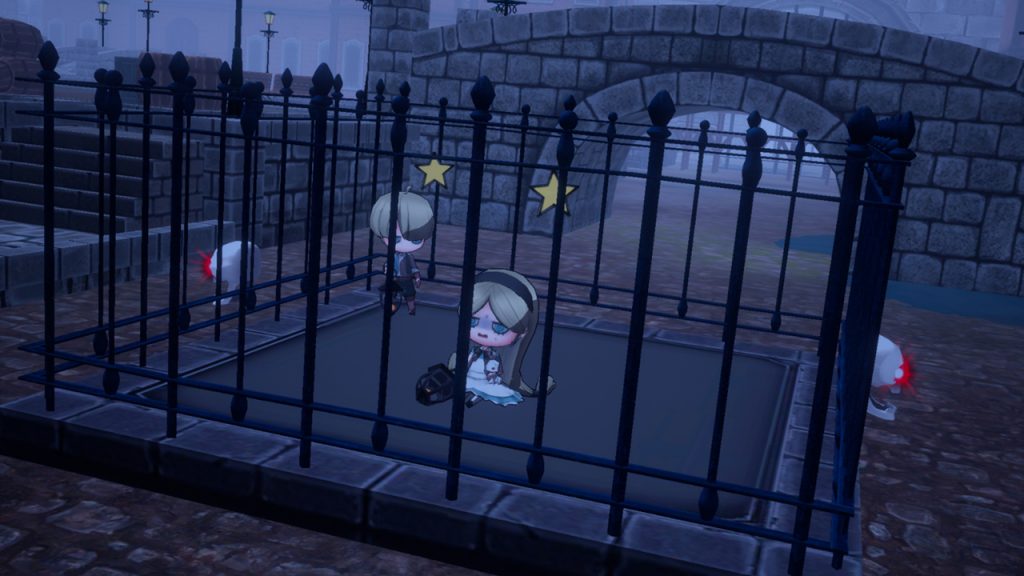 The game reminds me of a cross between Yokai Watch and Dead by Daylight.  The characters are extremely cute and chibi looking. Each map is unique but within the map itself, its pretty bare. Nothing really stands out, but I believe this is the reason why the game runs well in all modes.

The few online games that I played ran extremely smooth and were a lot of fun. I did have problems finding a full lobby to play against other players, but the game does add bots to fill the lobby during those slow periods. The intensity is increased when playing with a bunch of real people.

Local co-op really shined for me. My three kids and I had a blast playing together. After every match, we alternated who was the monster. After around 5 matches, when everyone learned the basics, the game became very competitive.  I am looking forward to the next adult party we throw to pull this out. Should be loads of fun! 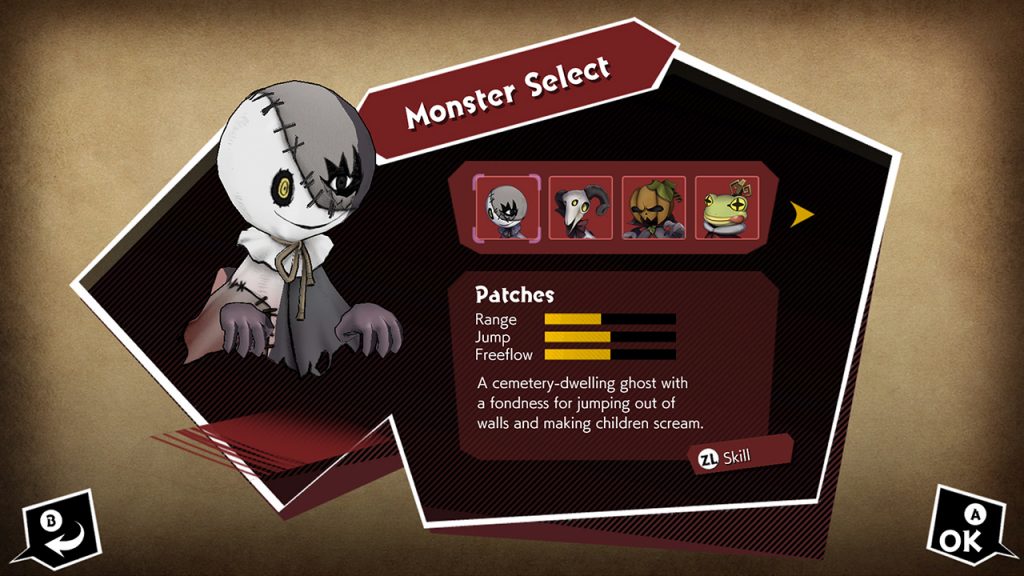 The audio for Obakeidoro is decent. The music is cute and when the monster is close to the humans, the tune changes to be more tense. Each monster has a slightly unique haunting and sometime comical sound they emit. My biggest issue with the sound is the lack of a diverse soundtrack.  Every stage plays the exact same music. A little diversity would have been appreciated. 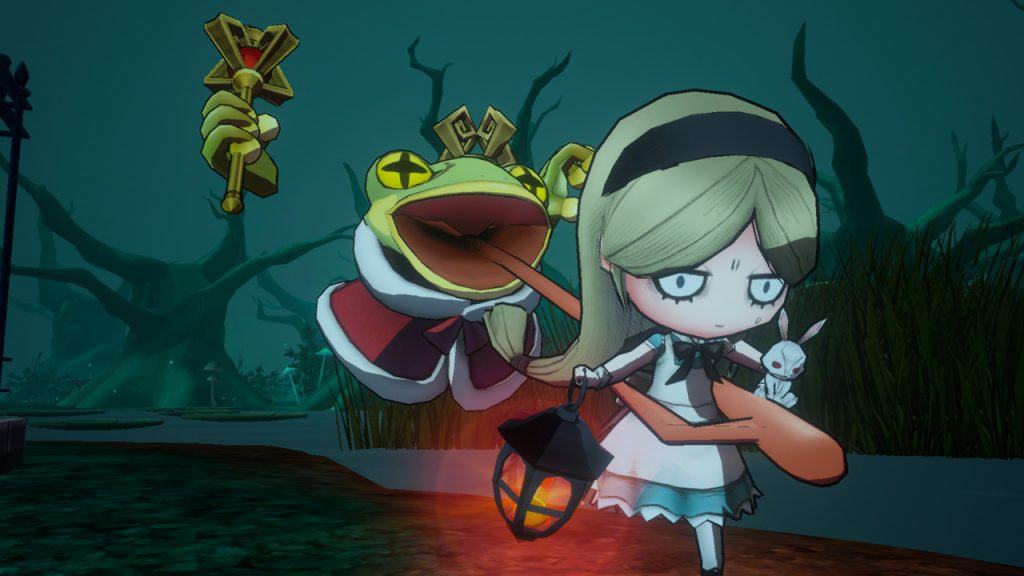 It’s Halloween time, and I am completely addicted to Friday the 13th.  The problem with that game and Dead by Daylight, is that I cannot play whenever the kids are around.  Not only can I play this game when the kids are around, I can pass them some joy-cons and we can enjoy some split screen hide and seek! Obakeidoro is not going to win any game of the year awards, but its a lot of fun to play alone, online, or with the family!

Check out our review of A Knights Quest HERE!

Undead Darlings ~no cure for love~