After the global nuclear war and the outbreak of the Red Plague, most of humanity has been wiped out. The ones who survived have mutated due to the radiation. Or so the Elder says, he is the only remaining survivor with knowledge of the past. The Elder, like all other life, resides in the Ark, the last hope of civilisation. Unfortunately, living in the Ark is hard with resource dwindling, it is up to the Stalkers a brave group of Mutants to brave the Zone. A place the Elder has forbidden the others to venture. The Stalkers must go to the Zone and find resources for the Ark. The Zone is inhabited by Ghouls, these are the humans that have been driven violently insane after the bombardment, they worship the old world and the Ancients.

Bormin and Dux are two Stalkers tasked to find a Stalker by the name of Hammon. Hammon is the only one who can keep the Ark running, and is the one Stalker who has travelled the farthest into the Zone, he also believes he can find Eden; A place free of hardship. Bormin and Dux are to follow after Hammon and his team and bring them back to the Ark, here is where the story of Mutant Year Zero Road to Eden begins.

The story is really interesting and draws you in. This is done with some excellent in-game writing between characters in the party. That reveals more about the world and the story in a far more natural way. 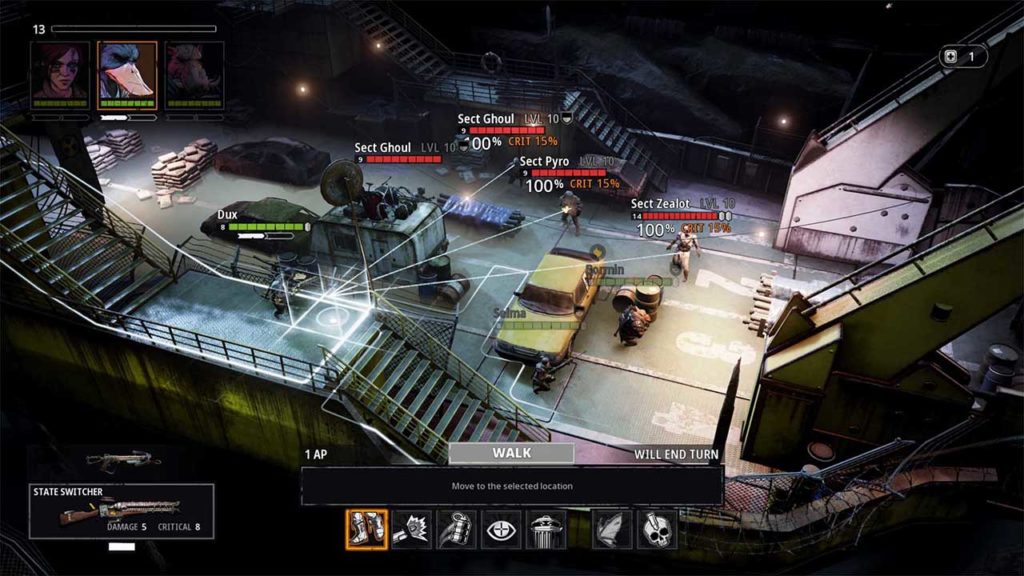 Mutant Year Zero, is like Xcom with free movement. Before battles the players are allowed to explore the dense post-apocalyptic areas as they like, not being linear it is nice to see there are things to find off the beaten track. Here are where most of the story is told. As you approach a battle, you can crouch to get into better positions or to even avoid battles altogether. It is also possible to split the group for more versatility to start a battle. The characters have a point that can be used to shoot, move, use items, etc. Beginning with two points, the characters can move within the white grid then attack with a normal attack or can use the points to move slightly further and end their turn. They all have their special abilities that can cost two points, so no movement is allowed. Points are replenished at the end of each turn. There is, like in Xcom, a heavy emphasis on the placement of characters, be that higher ground for better shot percentage or cover to reduce their hit percentage. How fights play out depends on how well you utilize these essential elements.

There is a level up system within the game that allows as you would expect better stats and special abilities. These work fine, and you do feel a slight enhancement within the characters that fit well with the story as difficulty increases. One thing I really liked about the level-up system was the fact there where physical changes to the Mutants. Only little things but made a significant impact.

Like all good tactical RPGs, there is loot and lots of it. From scrap materials to the weapons and gear. These are found in the world be it in boxes, on the ground, or rewards after a fight. Each weapon and bit of equipment is shown on the character that is a nice touch as a lot of games will change the weapon model or even nothing. Scrap is used as currency to buy items from the shop on in the Ark. As well as adding upgrades to the weapons.

The game has all the extra content as the PC and leader boards to show off how good you are (or in my case decent I was). The game has a lot to offer, and I have only scratched the surface. 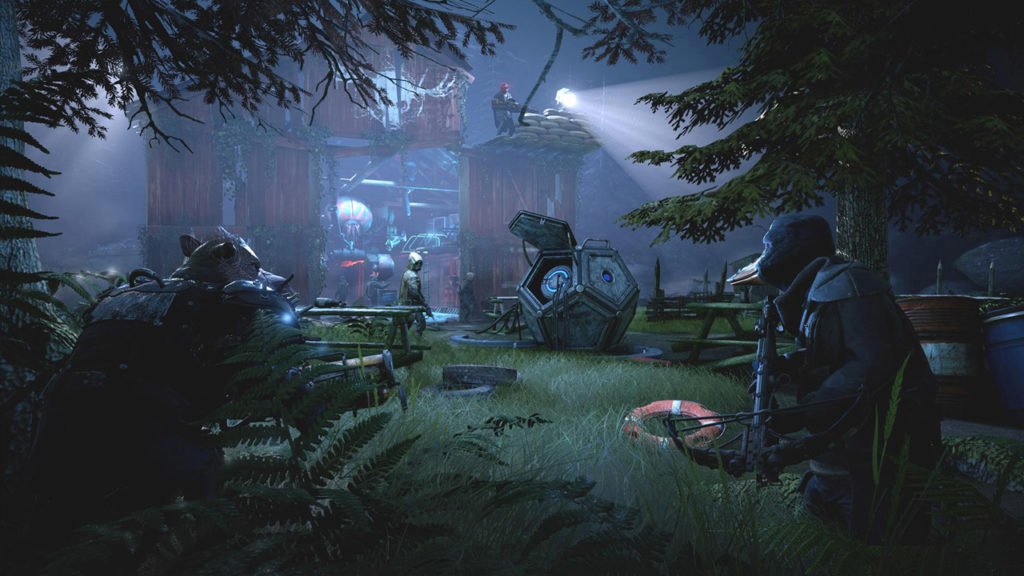 Never have I in recent years been so astounded and disappointed in graphics of a game like I have with Mutant Year Zero.
Starting the game you are treated to this wonderfully render intro video, with so much detail, you get overexcited for the in-game graphics. In fact, this video is one of the best I have seen on the Switch. Then the game kicks in, and it was almost like I took a punch to the gut, the contrast is beyond comparable.

When the gameplay starts, you are met with a screen that is dark and dingy, and in short dire. The backgrounds are all washed out, and everything looks fuzzy. Walking around the open areas is tedious and frustrating, with items that are to be picked up are almost indistinguishable from the surrounding area. To make this even for annoying the things that can be picked up flash – it does not help.

I gave the game the benefit of the doubt and was thinking to my self “Its night time, might be intentional.” How naive I was! Nothing got better, and to make it worse, it was intentional to get the game to run. In a fight, graphics were not as much of a hindrance, as enemies were highlighted in red when targeting. Also, the movement box was well highlighted to show obstacles at the range of movement.

I did, however, like the in-game cut-scenes because they are presented as different stills done in a watercolour based comic book. Totally different for the rest of the game and by far the best part of the in-game graphics.
As for performance, the Mutant Year Zero ran smooth, transitions form free-roaming the map and fights were seamless. Load screens were not long. There was one annoying bug that I encountered a few times when I split up the team to ambush the enemy, then finish the fight it was impossible to highlight more than one party member. This bug occurred several times, and the only way I could get the party back together was to exit the game and reload the last save.

Overall the most significant problem the game had was the intro movie is so good, I felt totally lied to when I started to play. The party bug was overly annoying; this section is by far the worst aspect of this title.

The game got patched and visuals have improved but still not a lot in my opinion. 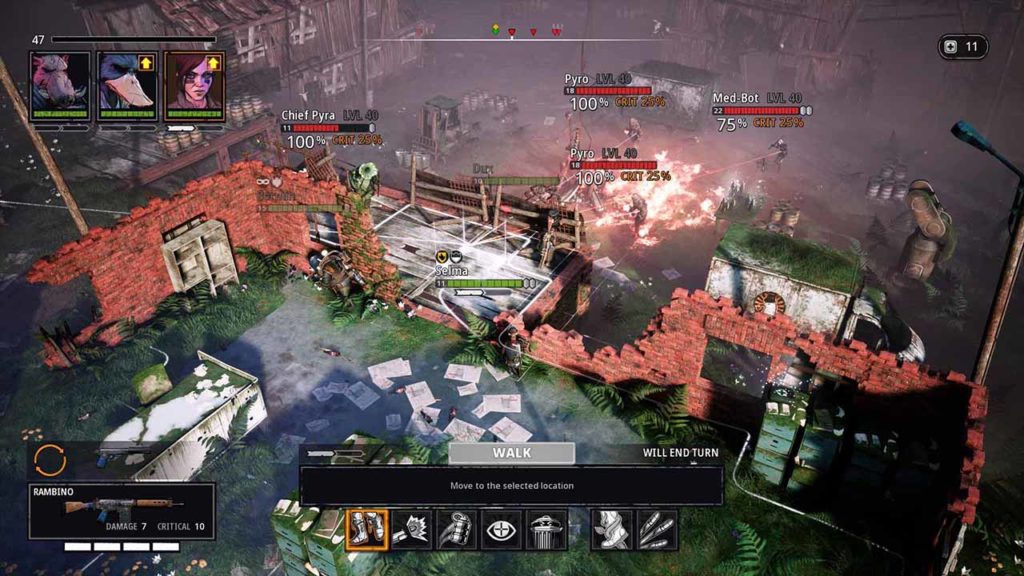 In the sound department, Mutant Year Zero nails it.

The music is just creepy enough to make the game feel dangerous and wonder what will be stumbled upon next.

The sound effects are great, audio cues let the player know without much effort that there is a danger. Mix this with the ambient noises in the game world its all works well together. The weapon’s sound design is excellent each of the many weapons all sound different, and give each type of weapon suitable weight when shooting.

Both the music and sound effects are outdone by the voice acting. This is simply stellar, the general chat between your group to the change in tone while crouched. Even the dialogue of the enemies is excellent. The talking is also there to convey the story as well as fill in the background of the world. The voice acting is some of the best on the Switch. 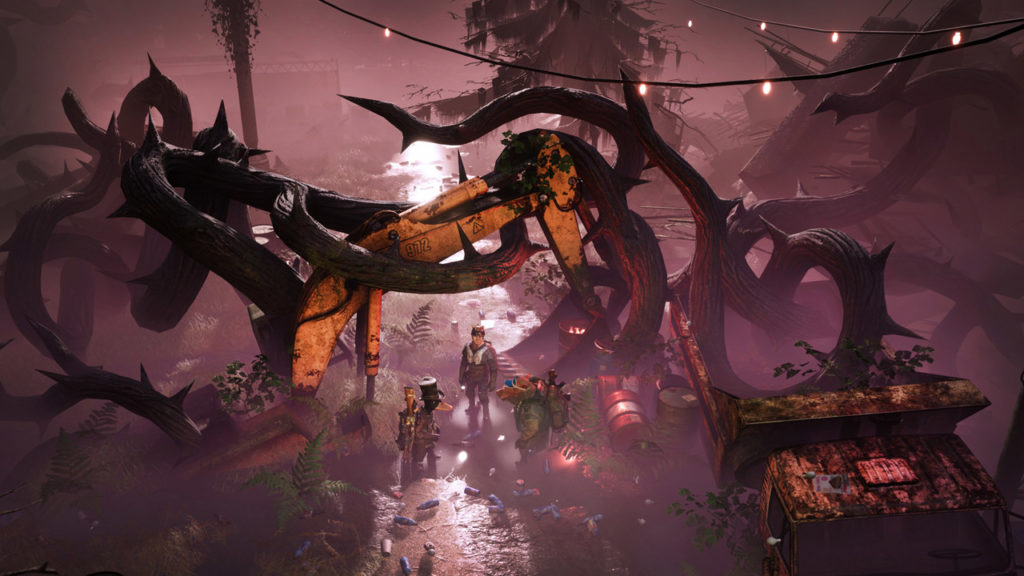 Mutant Year Zero is almost an outstanding tactical game, nearly everything is what you expect from the genre, and in some places exceed expectations. The one real problem is the visuals. If the game looks terrible, then most people will be put off by the game even if it is outstanding. Mutant Year Zero is a solid game in terms of mechanics, but to look at it is a total disappointment. Do not get me wrong;  some would be be able to see past the graphics and appreciate the game for what it is but I know a lot of gamers look at graphics first.

If you are looking for a great game but not too concerned about the visual department, this could be for you. If you want the full package, wait for a sale.

If you enjoyed this review and want more RPG fun check out The Tenth Line HERE!