Metal Wolf Chaos, was first released back in 2004 in Japan on Xbox exclusively. This was FromSoftware first Mech game on the Xbox and due to the low popularity of the console in Japan and Microsoft being an American compan, led them to design a game with over-exaggerated themes of American patriotism. Fro, this the game got itself a sort of cult following in the West.

Devolver Digital expressed localising Metal Wolf Chaos back in 2016. After positive fan response, FromSoftware producer Masanori Takeuchi began conversations with the company. Now it is on PS4, PC and Xbox One.

You are Metal Wolf, the 47th President of the United States of America Michael Wilson. Vice-President Richard Hawk leads a full-scale nationwide coup d’état against you and puts the whole country on Martial Law. As the President of this great Nation, it is your sworn duty to take back your county, anyway possible. It is a good thing you have your Mech suit and guns galore as you’re going to need them all to stop this coup.

The story is total satire and makes fun of basically everything American, and in no way is to be taken seriously. It is great to have a Mech game with a easy to follow daft story, where action is the main draw. 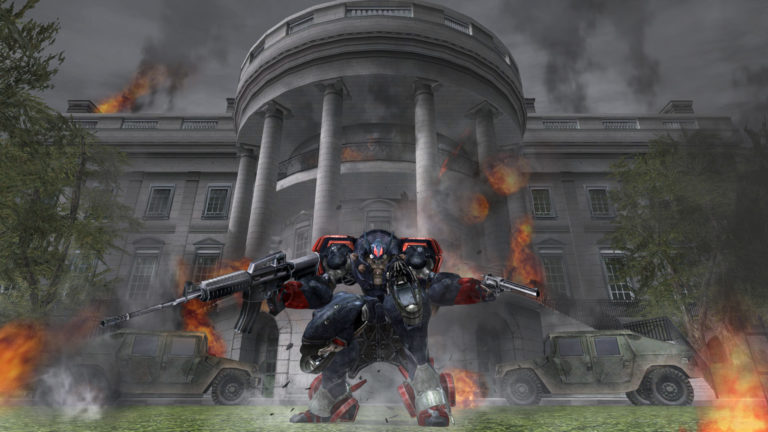 Metal Wolf Chaos XD is a third-person mech shooter. It had a more unique way of replacing the traditional crosshair, using a hit area instead. This was represented by boxes of different sizes and each weapon had its own accuracy, with high rate of fire weapons having a bigger box and snipers being smaller and more accurate. This is perfect for the over the top action as you end up spraying way more bullets than you need at the enemies! With it being third-person also, the player gets an excellent all-around view of the chaos that they are causing. Movement controls have been tightened up as well in most places, although the camera pan can be a bit too sensitive at times. The controls are simple left stick to walk and right to aim, the mech can jump and boost forward for a limited time and perform a dodge. Each of the weapon fires independently of each other, meaning L2 for left weapon and R2 for the right weapon. Overall the game plays much better than the original.

Now we move on to the methods of how to kill everything that moves. On the back of the mech, there are two massive pods, one on each side — (the left pod for heavy weapons, i.e. rocket launchers and the right for light weapons, i.e. handguns, rifles). The pods house all the weapons that the President can use to take back America. There can be up to eight weapons carried at any one time. Some of the weapons take up more weapon slots. E.g. Sniper rifles take up the pod slot it is equipped in and the opposite slot in the other pod.

Being able to change guns quickly is essential to get the job done right, as you won’t be able to stick to just two guns all the way through. Pressing circle will open up a menu showing all the weapons you have brought with you. To cycle through the weapons just press L2 or R2, depending on what weapon you wish to change press circle again to close the pods and equip the selected weapon. One thing to note each weapon has its own shot distance as well as its own aiming box, so making sure you pick the right weapon to shoot at the right range will save you bullets. Still not enough firepower? As you kill everything in sight and get hit, your power bar will fill. Once it is full, you can use the mech’s ultimate attack ‘Blaze’ by hitting L3 and R3 together. Both pods open and shoot every gun at once for a set amount of time with no bullet loss. This is powerful enough to destroy most everything. With the mention of bullets it is also important ot know that each gun has its own ammo pool for maximum fire power. I thought it was a great feature to have the weapons pop out of the pods and move while you pick a weapon.

As the President is taking back America and basically destroying everything he can, he will have a few objectives in missions. Most missions tasks you with destroying every enemy or specific outposts. While doing the main objective the President will need to rescue civilians, collect power cells (to level up the mech), along with anything else the Secretary says you need to do mid-mission. Don’t forget ammo, materials, money, and the occasional weapon drops to look out for. This breaks up the repetitiveness, and some of the dialogue is so over the top it is cringy but worth hearing. Once the main objective is completed, there will be a boss encounter at the end, these are fairly simple, it’s just a case of understanding the attack patterns and taking your opening, rinse and repeat. Nothing out of the ordinary for an action game of this type.

Before a mission, there’s the opportunity to do research into new guns, as well as buying new guns. To equip a weapon, it needs to be researched, giving the option to then purchase the gun. Research cost money that is collected in each mission. To buy the researched guns, there needs to be money and materials, again found in each mission, and multiple of each weapon can be purchased. There are A LOT of guns in the game over a hundred of them. Making for a lot of replayability, mix in the beating your top score of each mission the amount of reply is almost endless. 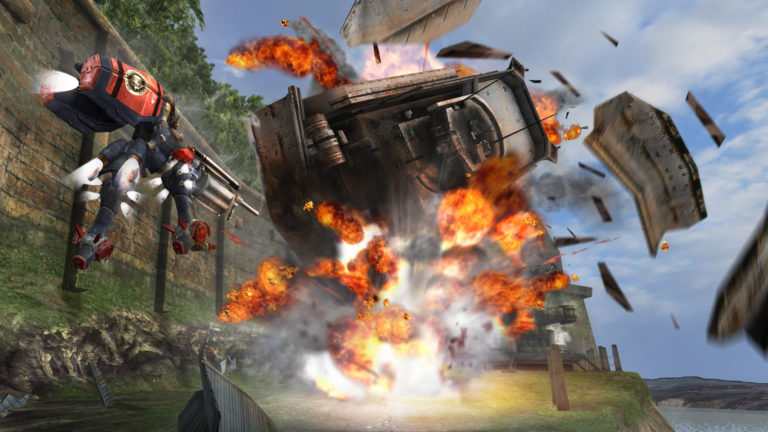 Visually Metal Wolf Chaos XD is far more polished than its predecessor. It has been upscaled to support 4K and run at 60 FPS. If we are to compare the original version to this version, then the XD version is a million miles better quality. The UI has had a full overhaul with everything looking and feeling smoother and crisp. There is far more detail in the buildings and environments. The Mech is really lovely looking and polished. The destructible assets around a map all look and feel better to blow up. Explosions Michael Bay would be proud of.

It was only a comparison of the two versions while playing it is possible to see this is an old game and it is a remaster not a remake. Do I feel this is a problem? Not at all, it keeps the charm and feel of the original while looking better.

There are no note worthy bugs I noticed with my time within the game. It runs very smooth. 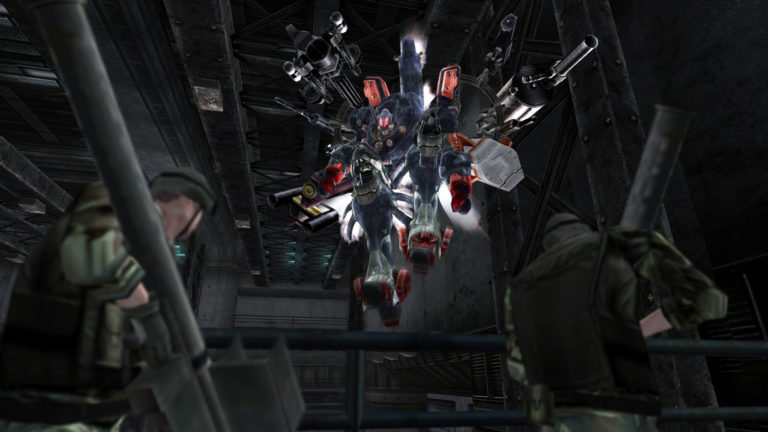 Like everything else in Metal Wolf Chaos XD, the sound design is over the top and patriotic, and I love it.

From the overly direct President shouting about saving America, to the bad puns used within the game; they are all great. The game is fully voice acted, and the interactions between the President and his secretary are just great. Her calm and collected demeanour and gentle voice, to the Presidents quick shape often flat replies. They seem to gel so well. Unfortunately, the actual sound quality while I played was not excellent. I used the PlayStation Gold headset, and the voices were a little quiet and distorted. It did not take away from the interactions; however, it just made it harder to hear with the explosions going on.

The best part of the voice acting, and what made the story of the game flow was the News Anchor,  selling false lies to the country, making the President look bad and evil while the Vice-President, a nice guy.

The sound effects of the guns give the feeling of shooting overpowered. The noise of the soldiers is annoying after a while, and they sound like tin men that only have the one line and scream as they ragdoll away from an explosion.

The sounds have not been upgraded that much in all fairness it does still sounds as it did back on the Xbox, but hey it still sounds great. There’s something about the graininess that is captivating. 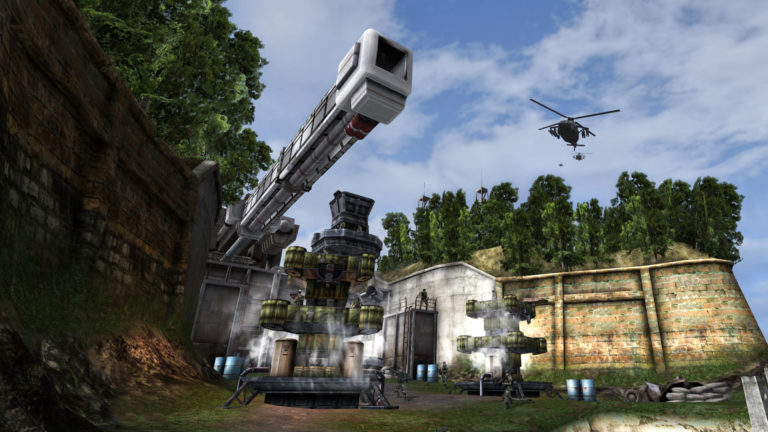 Metal Wolf Chaos XD is in no way shape or forms meant to be taken seriously. It is pure satire that overplays Americans patriotic views of their country. I liked the fact it was so over the top, being more of a silly story line than a serious one you have to pay attention to. Too often they are politically charged story lines that you see in so many mech-based stories. The game plays well with no significant problems.

For me, it is one of the games you will pick up and play for a few hours for mindless destruction and overall fun. If you are a fan of this sort of senseless destruction, this is for you. Not something with a hard-hitting story, but it is still worth the price tag.

Wanting a little more Mecha action then check out our review of, Japanese only (for now) title HARDCORE: Mecha HERE!