Mary Skelter is finally on the Switch, originally released on the PSVita back in 2007. Here it comes bundled with the latest installment of the blood-covered horror Dungeon-Crawler Mary Skelter 2.

A sentient Jail appeared several years ago trapping everyone inside now these trapped inhabitants are the Jail’s food. The Jail has created Guards known as the Marchents and Nightmares. These are not to be trifled with.

Take control of Otsuu and her princess Little Mermaid as they attempt to track down the Blood Maidens to escape. Their organisation “Dawn” has tracked the location of the Blood Maiden Alice and her friend Jack. After their escape with several humans, Alice goes berserk and attacks everything in sight including Jack. This forces the group to fall down a chasm. When they wake Otsuu and Little Mermaid find Jack on the verge of death. He transforms into a Nightmare, but instead of attacking the group he is for some reason connected to Otsuu. Making for an invaluable partner.

The story itself is excellent; the characters are all based on Fairy Tales and Fables. It is dark, depressing and makes the world feel foreboding. In turn providing the feeling that danger lurks around every corner. 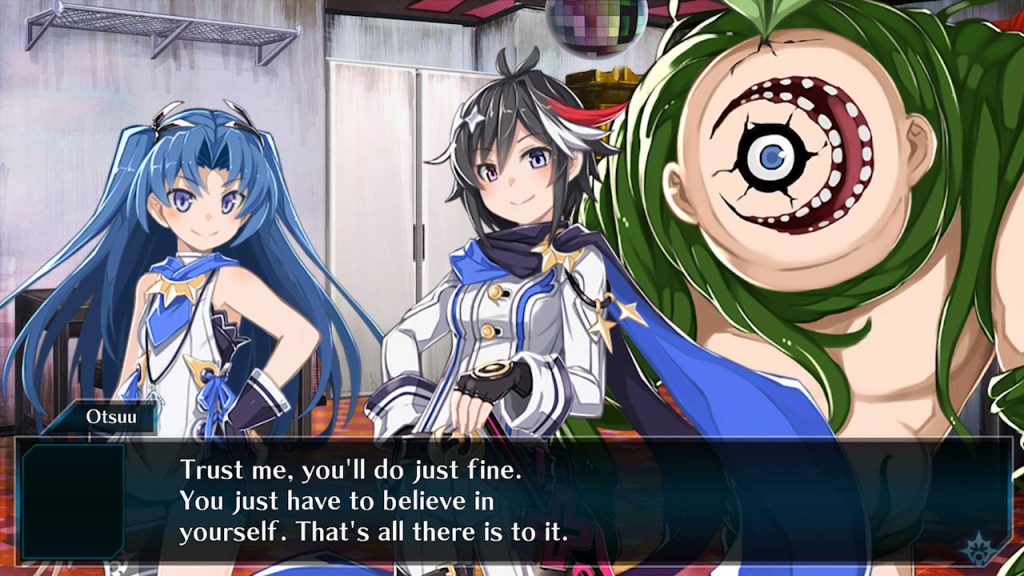 -One big thing I found the most useful was the auto-route system, yes they are in other of its ilk. however, this one allows the route to carry on to other floors. It speeds up backtracking a load.

-While in battle, Otsuu has her trusted partner Jack, the nightmare. This added some versatility to the fight along with its own dangers. Otsuu gains an extra turn with Jack, so this allows for two attacks or use Jack. Jack comes with a set of problems, if he is used to much, he will go crazy and attack everyone. He will attack everyone until he is calmed down. Otsuu can use Counseling to calm him or you can wait till he calms down on his own.

-The battle system is in the typical JRPG turn style with a few bits added to make something new and interesting;
First, there are indicators when a crit hit will be performed, that come in three levels, depending on how flashy the animation is. This is important as with crit hits, it is possible to wound an enemy and get covered in blood. Yes, blood! There is a blood splatter indicator under the characters profile picture, this is really important for two aspects of the battle mechanics. Once all five blood splatters are full, on that characters next turn, she will enter Massacre Mode. This increases all stats as well as access to Massacre skills.
Secondly, it is possible to lick the blood off one of the maidens and get a heal from the blood. This action was a weird one when I first saw it.
There is also Mary Skelter mode, this happens when corruption occurs, and the blood maidens get exposed to more blood. They lose all control and go berserk unlocking their full power but in doing so will attack everyone regardless of who they are. Jack’s Purge skill is the only way to break them out of this and lower the corruption. It is also possible to clear the corruption back at the base by touching the corruption on the Blood Maidens. This reminded me of Omega Labyrinth Life when leveling up skills, if not as exciting.

-Kagome-Kagome is a special attack that can occur when a weapon with bloodshot is equipped. This will cause massive bleed damage as well as turn the enemy around, making them take extra damage.

-While making the way around the many dungeons taking on the Marchents, the screen will fill with white fog, just run. This means a Nightmare is coming, these are unavailable. It is, however, possible to stun them and run away, once the fog goes then the chase is over.

-Each of the blood maidens has abilities that can be used to solve the simple puzzles in the dungeon, for instance, Otsuu can create a massive ball of wicker that will open new paths to traverse a dungeon. It is also possible to throw blood around the room, because why not, as well as increasing crit chance. Most skills have a cost SP this is depleted with each use, resting or using items will replenish SP.

-With jobs comes skills, this is another fun aspect of the game. There are essentially two ways to learn skills. One is the general use skills, level them up and equip them. The other is by using blood packs, these skills tend to be passive skills, e.g. Heal +7. Before a blood pack can be used, they need to be appraised. Once a skill is learned, it is then transferable to all jobs, giving the player a way to create any Blood Maiden that suits their play style. Blood packs can be found or harvested, finding them throughout the dungeons and fights. They can be harvested from blood flowers when you see them.

-There is another crucial aspect to the Blood Maidens that I overlooked for a while. Blood Devolution, this essentially lowers the Blood Maidens level in exchange for CP to learn new skills as well as stat boots. CP is also earned from battles as a reward, same as EXP, money and items. Blood Devolution is a must to use.
There are also two extras added in for the dungeons.

-Dungeon trails: These allow certain conditions to but added to a dungeon, e.g. No skills. Once applied, the rewards will be drastically increased. This is good for grinding out levels and money. They also provide a great challenge and loads more replayability.

-It is also possible to make the Jail help you, but fulfilling the requirements the Jail desires. These are located on the top right of the screen. Once met you are allocated a Jail piece, these are used on the Jail Roulette wheel. By using the pieces, it is possible to get the Roulette to spin in for favour and help the party instead of hindering. The Roulette wheel can give the party and enemies a buff or de-buff, so fixing the wheel to help is a must.

There seems like a lot going on in Mary Skelter, and frankly, there is, and it will get time to get used to. As soon as the player figures out all the mechanics and systems in play, the game becomes something special.
There are not a lot of drawbacks to the game, but the occasional difficulty spikes. Overall the gameplay experience is excellent, and I loved my time with the game. 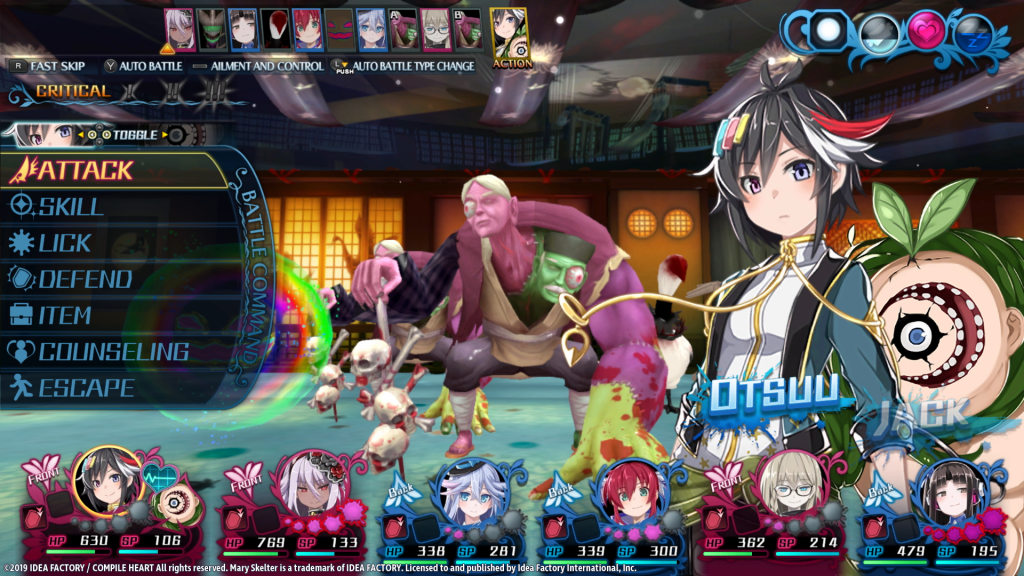 Mary Skelter 2, is the typical Compile Heart offer when it comes to the graphics a mix of the weird and wonderful with beautiful drawn Anime style girls and backgrounds for the cut-scenes.

With the game being in the first person, the full effect of the living Jail can be taken in. From steel walls to the heads protruding from walls baring their teeth looking as they will eat you. One part of a dungeon can seem like a charming town, and around the corner, the walls are breathing and watching you. It is really something out of a nightmare.

The anime girls with ample chest sizes and outrageous dress sense it almost a staple now with Compile Heart. They do not fail to deliver with this one. It allows the artist to come up with some crazy looking characters. Let us not forget the Nightmares some of these are just twisted abominations you would see amid a bad dream.

There is no bug to report that I noticed, the game ran perfectly smooth. 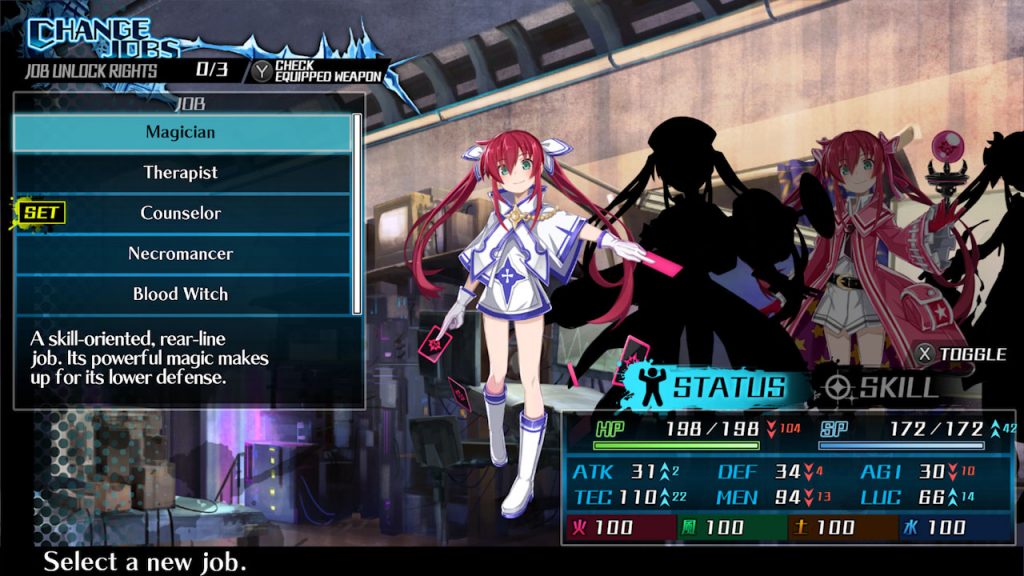 The voice acting in both English and Japanese in Mary Skelter 2 is both reasonably decent. The English cast does a good job with their voice over, whereas the Japanese cast is excellent. This again is a trend with Compile Heart doing great voice over work.

Sound effects throughout the game are good and do a great job of adding to the feeling of nightmares. Especially when throwing blood about. The music is outstanding, it is playful, mysterious, haunting, and attention-grabbing all at the same time. The composer is great at making scores that are a mix of everything while being easy to listen too. I love the music!

As with the graphics, if you played Labyrinth of Refrain, you will have an idea of the quality you will be hearing and seeing. 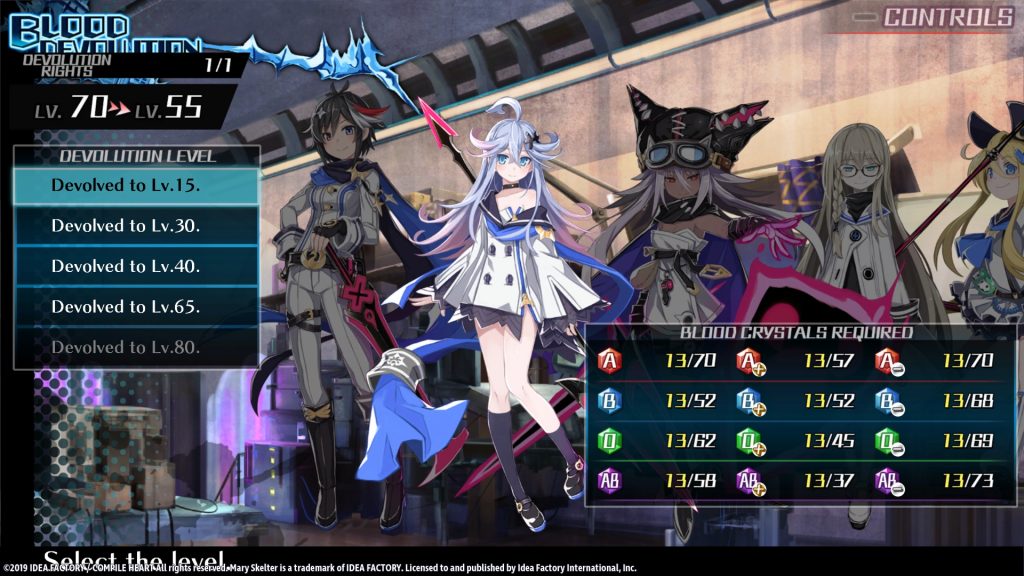 Overall Mary Skelter 2 is one of the better first-person dungeon crawlers out there on the Switch. The systems it employs adds a layer of tactical choices along with a decent story and an eccentric cast. It is not perfect, but the few problems the game has are not a big issue.

I highly recommend this one to any fans of dungeon crawlers. If you are not a fan then stay away as this is an out and out Dungeon Crawler.

Check out our review of Omega Labyrinth Life HERE!