Game Freak, the devs behind the Pokemon series has finally ventured off and created a new IP. Little Town Hero, wowed audiences when it was first announced and revealed during a Nintendo direct. After what felt like an eternity, the game finally made its way into the awaiting publics’ hands. While it certainly was dwarfed by the release of Pokemon Sword and Shield literally a few later, we take a look at this unique RPG. But was that wait worth it? Let’s find out.

The story of Little Town Hero is by all accounts a rehash of many tried and true classics before it. Monsters begin to attack your town, and you as Axe (or in my case “My Dude” try it out it makes in-game conversations fun) must defend your town and be the Hero they need. While on paper this may not sound groundbreaking, the level of care applied helps lift what could be a mundane story into something more endearing thanks to the incredible amount of heart put into the characters and their dialogue. The exposition is not voice acted which while not necessary was sorely missed in a game that could have greatly benefited from that extra layer of immersion. Thankfully on this quest, you are not alone as the local townsfolk are more than willing to help you rid the town of these abominations. 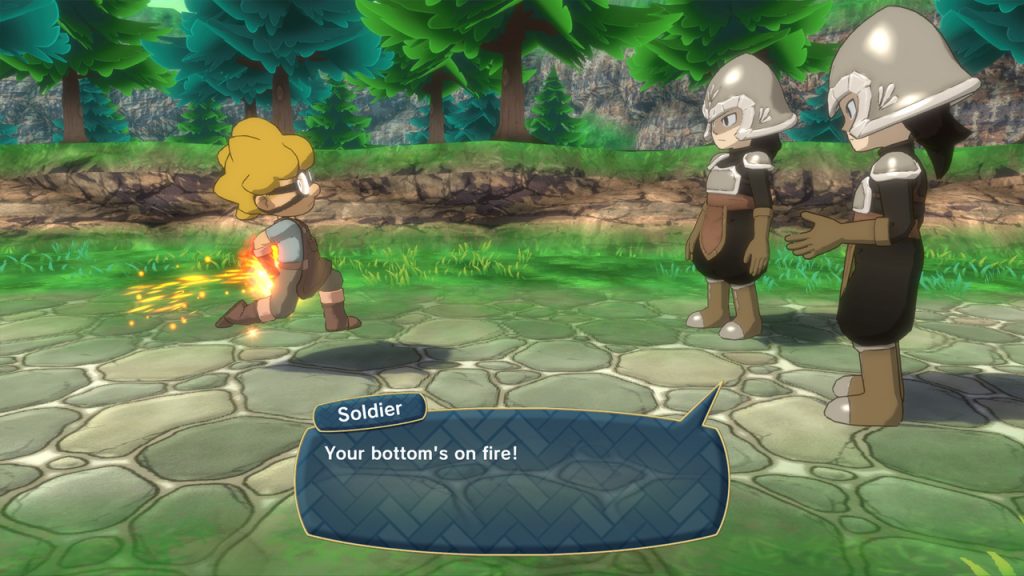 How they help is one of the little wrinkles introduced via the unique battle system. LTH follows a fairly standard turn-based format that has been tweaked to include some new elements that don’t always hit their mark. Once engaged in battle after both the player and the enemy have taken their turn, the camera switches to an overhead camera. From here a simple button press stops the digital die from rolling which will grant your character a certain number of spaces they can move. Some of these spaces will include the previously mentioned townsfolk who are waiting to help our Hero on his journey. This is handled via some dialogue and emergence of a new idea. Oh, boy are ideas important in LTH. To defend or attack, you are presented with 3 sets of ideas. Red, Blue and yellow. Yellow is a reusable defence “card” while red serve as your attack and blue the wild card that more or fewer acts as some sort of buff/debuff to either your character or the enemy.

Players familiar with deck-building games will have a slight advantage early on as on paper, and through the tutorial, LTH has a flow to it similar to a title like Hearthstone or even a more contemporary title like Golem Gates. The latter comparison can also be highlighted by one of the major flaws found LTH. The combat is while fun, also extremely random. Your starting hand and subsequent draws of ideas (izzits) require the use of your power in order to play them (dazzit). When your izzits health depletes, it breaks and is no longer usable until it is revived or the battle is completed. Having no control over what constitutes your hand removes pre-planning and can in some instances lead you to longer than needed battles where you struggle to stay alive before you can really get on the offensive. So while it’s deep to some extent, the implementation is very superficial and ultimately hindered the experience. This was troubling because everything from the control side of things was excellent. Everything handles as you would expect and without any overly convoluted sub-menus to navigate. 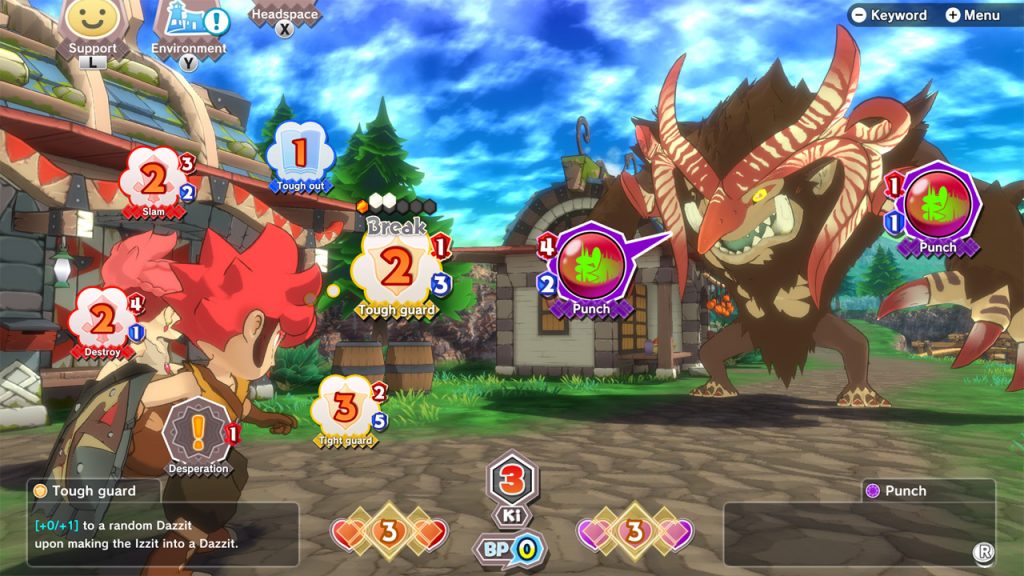 Visually, LTH is a treasure. The beautiful art style is eerily reminiscent of Breath of the Wild. The strong black outlines help the characters, and individual items in the world stand out against the painter-esque landscapes. While this is but a little town, the amount of care given, to bring it to life, is evident with the winding dirt roads and children running in the distance. The character design is another strength as each NPC have their own unique look and style but ultimately, their own personality as well. The monster design is A+. Each filled to the brim with imagination and years of rejected Pokemon. While you may be the star and the titular Hero, the opposing forces of darkness take all the visually shine. No matter how frustrated I became with the combat system, the allure of what the next behemoth had in store was enough to keep me coming back for me. 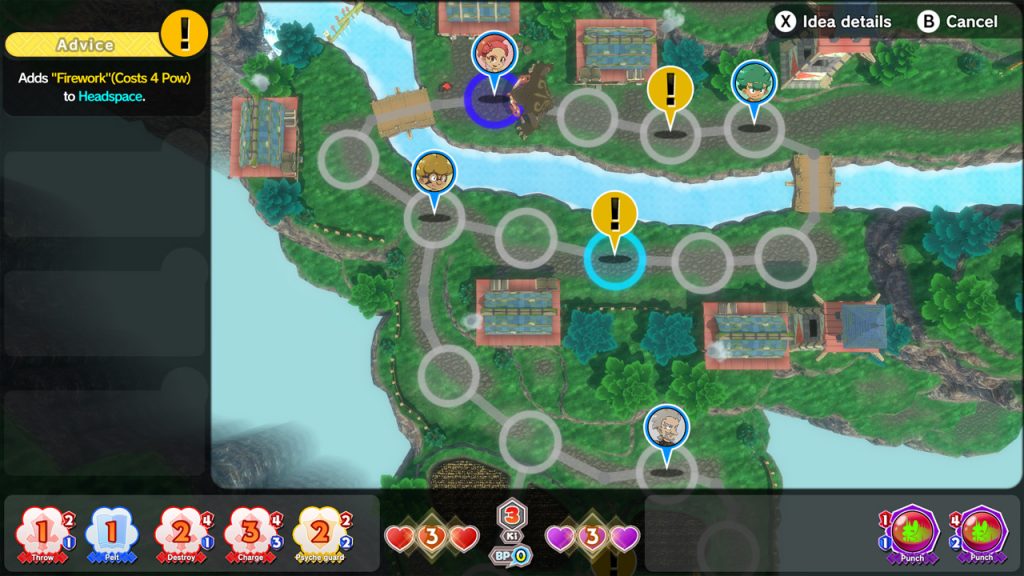 The same can be said for the sound design. The rousing score perfectly sets the mood for this aspiring adventurer. This is balanced out by the spot-on sound effects that do a great job of articulating what a lack of VO couldn’t. You are able to sense the joy and fear as your character and his pals encounter a seemingly endless barrage of enemies. Paired with the previously discussed visuals, gives LTH a level of charm often missing from a lot of today’s grittier titles. 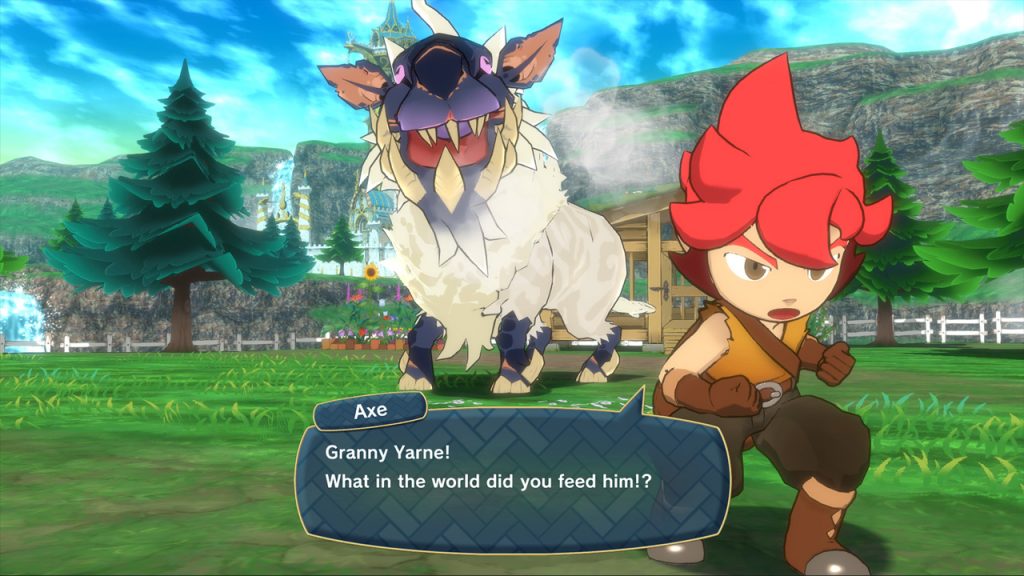 Little Town Hero, while not the groundbreaking new IP from the house of Pokemon, is a decent addition to anyone’s RPG library. The randomness of the combat system, as well as the moving battlefield, put a damper on what is otherwise a compelling and cute RPG experience. In a modern era of pushing graphical limits to bring a greater sense of realism as well as just showing off visual flare, it is refreshing to have an honest old school take on the genre.

Check out this review of Trails of Cold Steel 3 for more RPG action HERE!