Set in a near open world filled with colourful and sharp detailed graphics, combined with an enjoyable, amusing story. Knifeboy is a unique, quirky fun action – adventure game which falls into   the MetroidVania genre.

After being brought back from the dead the world Knifeboy knew is over, “The New World Order” has been defeated – however a new foe has risen, going by the name “Anonymous and it’s up to Knifeboy to tackle this enemy and bring about peace once more. 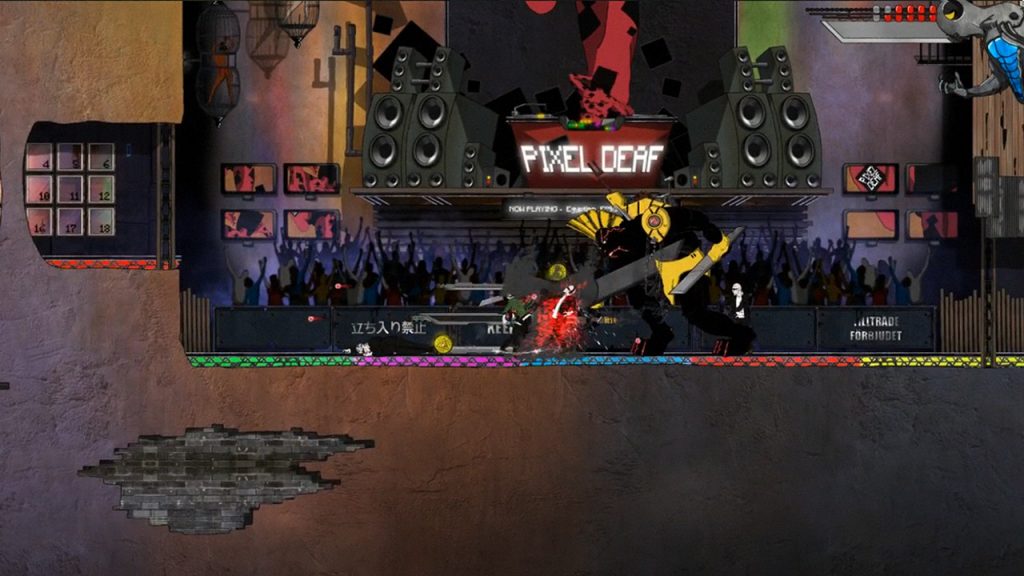 Taking place in the Nevada Desert Knifeboy looks like your typical platformer game, but it plays like a semi RPG. As Knifeboy, you can explore and accept missions from weird and wacky characters while subsequently punching and spin-kicking your way through numerous foes. You have the classic platform jumping, lift hoping, weapon dodging and fighting associated with this category but what sets Knifeboy apart from the norm is it’s peculiar little additions in the game, for example, you can play with a controller (which is recommended in the game menu itself), I used an Xbox One controller which for the most part worked perfectly with the game. Throughout your adventure, you can collect and examine objects to learn about the game world and Knifeboy’s past – a nice little addition to the story. The cut scenes are presented in a comic book style with sharp animations and colours, with classic text to accompany the images.

While playing Knifeboy I was impressed by the variations of characters in the universe, from the Agents in suits to the horse bartender and the distinct knife welding frog there is no shortage of weird, but funny beings in this game.

The missions are varied, some you can jump right into, others you have to complete at night (a feature I liked – sets it apart from other games).

While I enjoyed the overall premise of Knifeboy, I felt as though something was missing, don’t get me wrong I enjoyed the missions and the game world, but at points sometimes I was confused as to where I was to go or what I was to do. I’d go to explore an area, but annoyingly it was closed off or I’d get stuck between platforms and would have to venture all the way back to the previous save. Enemies would also re-spawn quite fast too which irritated me, apart from that there were a few grammatical errors – but that’s me nitpicking. 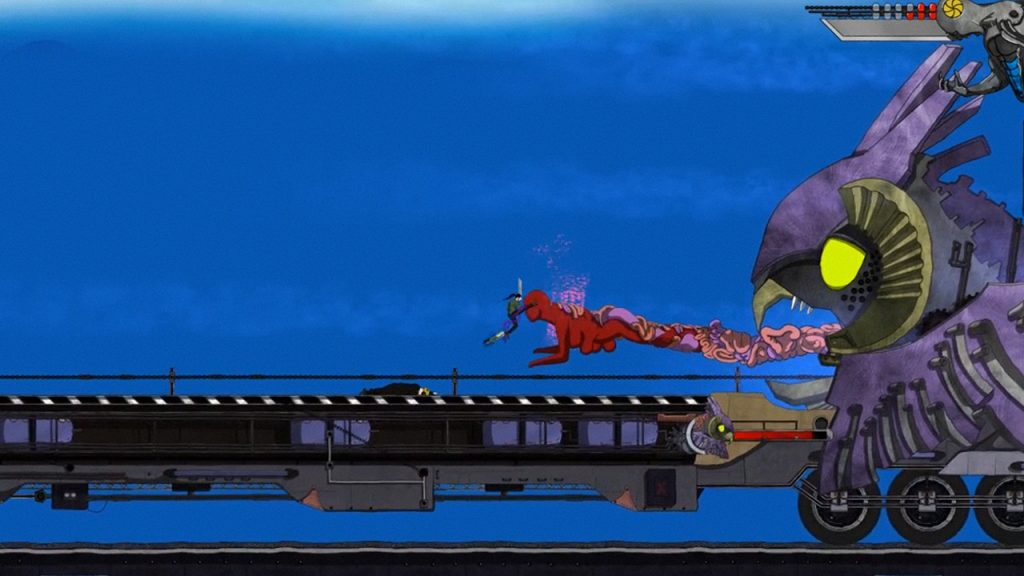 Knifeboy is very appealing, I have mentioned above about the cut scenes and variations of characters, which are overall superb. The little details, e.g. the design of the caves, The Hub and Link Cafe or just the trees or pictures on the wall – I was impressed to find out hand-drawn art was used.

I did have a few issues with the game’s performance. As mentioned I used an Xbox One controller to play, over the course of the game it mostly did work without issue, however more than a few times, I had trouble with buttons being non-responsive which was a problem when I was facing a giant monster with two very large swords. About 15 minutes into the game it crashed as well, this proceeded to happen a few more times over the course of playing the game. 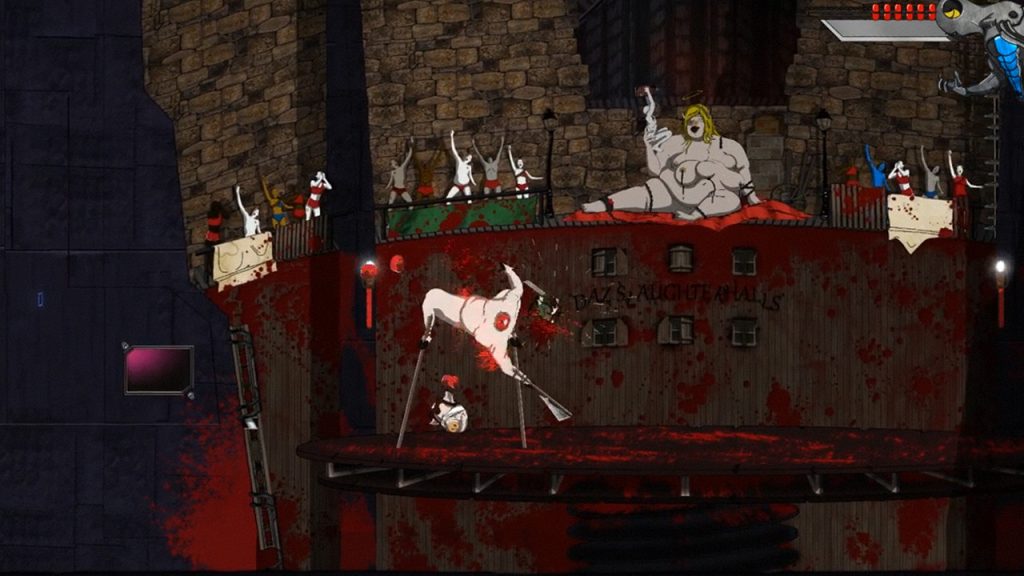 Knifeboy’s soundtrack has a very synth/’80s kind of tone – a style that goes well with the narrative of the game. I was also impressed by the first song which plays in The Hub when you first go in, the singer was very good, and the sound design was crisp and clear – yet another fantastic addition to the game. You also have the typical punching sounds and grunts when it comes to facing enemies and jumping lifts and steps in the game. 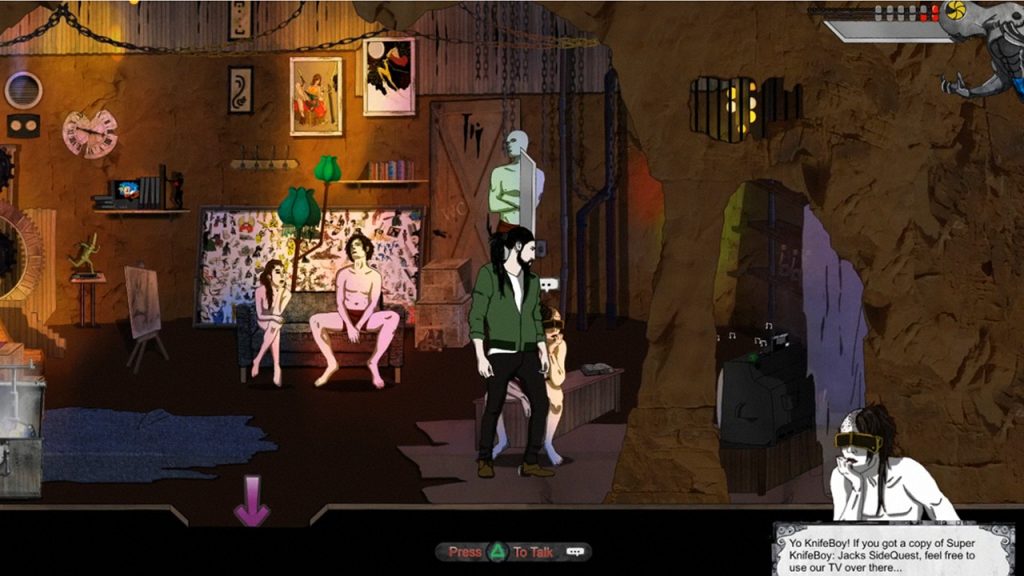 Overall, Knifeboy is an enjoyable, entertaining, all be it an eccentric game. If you are looking for something different to occupy yourself for a few hours, Knifeboy is a good pick. Just be sure to pay attention to the story, pick up the collectables and try to explore a bit; for what Knifeboy lacks in gameplay it makes up for in visuals.

For more weird gameplay check out our review of Omega Labyrinth Life HERE!