After seeing the new Jumanji film with my son, he begged me to get the video game. Subsequently, he then begged me to let him help review the game. Taking inspiration from another writer who did this, I figured why not, so here is our joint review of Jumanji: The Videogame.

The story loosely follows the plot from the first reboot film of Jumanji; save Jumanji by collecting four pieces of the Jumanji stone and place it back onto the Jaguar statue. 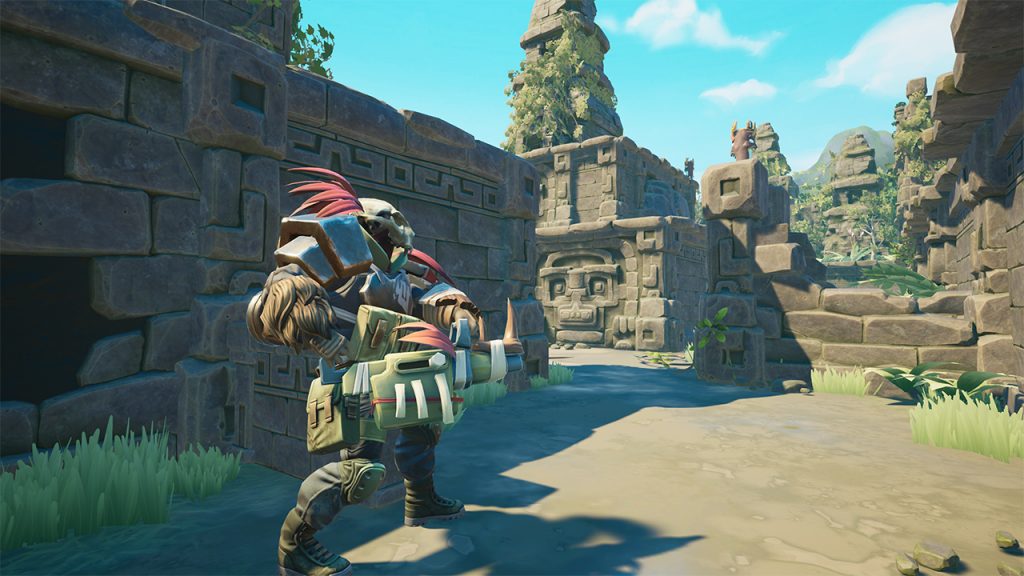 The gameplay follows a simple formula that gets VERY repetitive really fast. You start by picking one of the four main characters from the film, with each having their own weapon and super move. For example, Ruby Roundhouse has a crossbow, which is highly accurate, and her special move is her boom box that increases the damage of any other playable character in its radius.

Me: Who was your favourite character, and why?

K: My favourite character was Shelly. I liked his shotgun weapon the most.

The game consists of four areas that are split into sub-areas. These work as follows; a small maze style level with lots of bad guys to shoot while collecting the Jumanji stones. It is followed by a short trap run where you have to dodge simple traps and collect the stones. Followed again by a wave-based level where the characters have to survive till a pillar is charged and then another trap run and after all, that, guess what…you do it all again.

The first problem with Jumanji: The Videogame is that the levels are monotonous. Secondly, then it gets repetitive as the game wants you to do the same thing all over again, at least three more times, to complete all the main areas, and sadly, it is not fun. Lastly, the controls are clunky and feel slow. There are only three enemy types with only one variation of each, adding to the monotonous feel of the game. There are unlockable skins for the characters, but this is done by replaying the game over and over to level up each of the characters. I will be very clear this is not something you should waste time doing. Hitting your head off a wall repeatedly feels more
enjoyable.

It is not all doom and gloom there are a few good(and I use that term loosely) points. One of them is carrying the Jumanji gem will increase the attack power of the weapon, but only for a set amount. This is indicated by the gem turning purple. If you keep hold of it too long, you will get damaged by lighting. Managing the gem is essential. The multiplayer aspect of the game is lots of fun.

Me: What part of the game did you like?

K: I enjoyed the bigger enemies with hammers and guns.
This is the whole game, and there is very little to add after this. 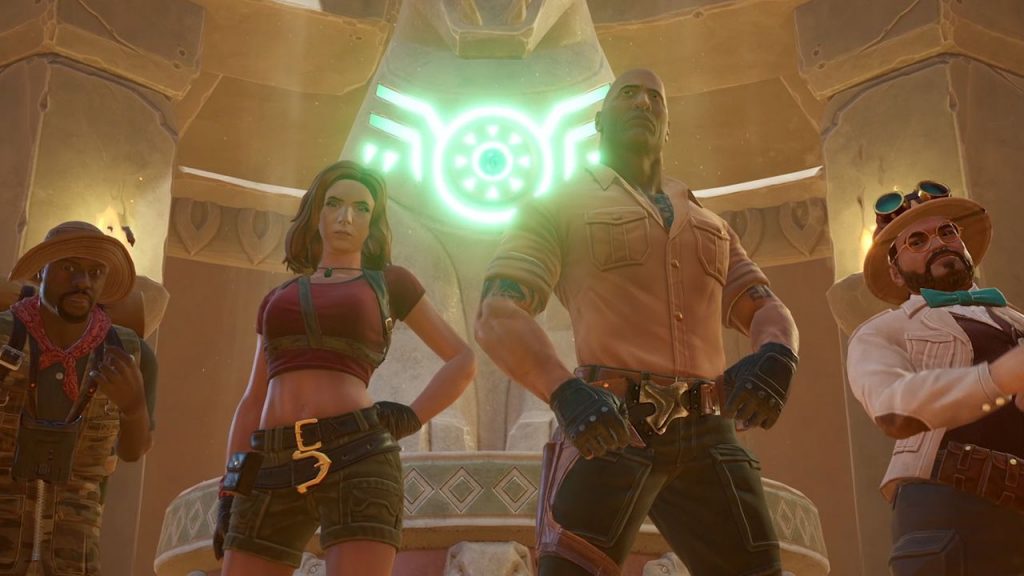 All we can add to this bit is it doesn’t look very good. The avatar models barely look like the characters in the films that they’re based on. I mean you can tell who is who but the aesthetic just didn’t do it for us both. The levels are just as bad with poor textures and low details throughout the worlds. This game feels like a rushed job, and I don’t mean to presume, but it also feels like low budget effort despite it being a fully licensed game.

Me: Is there anything you liked about the look of the game?

K: Shelly…is the only decent looking thing in the game. 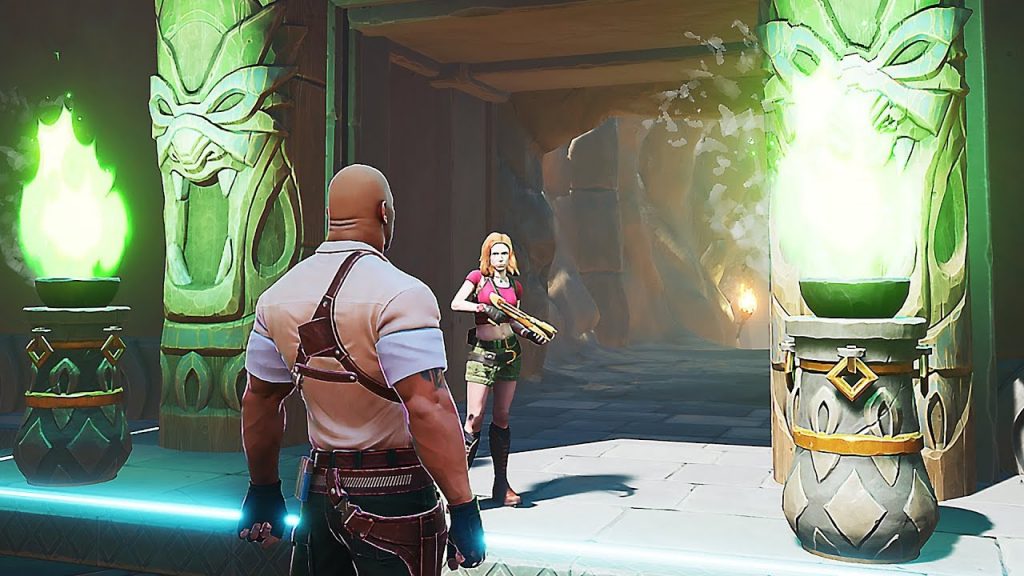 The sound design is very substandard. It is a step up from the visuals but nothing to call home about. The voice actors do a good job of portraying the cast, especially Dr Shelly.

Me: What do you think of the sound?

K: I liked the Boom Box 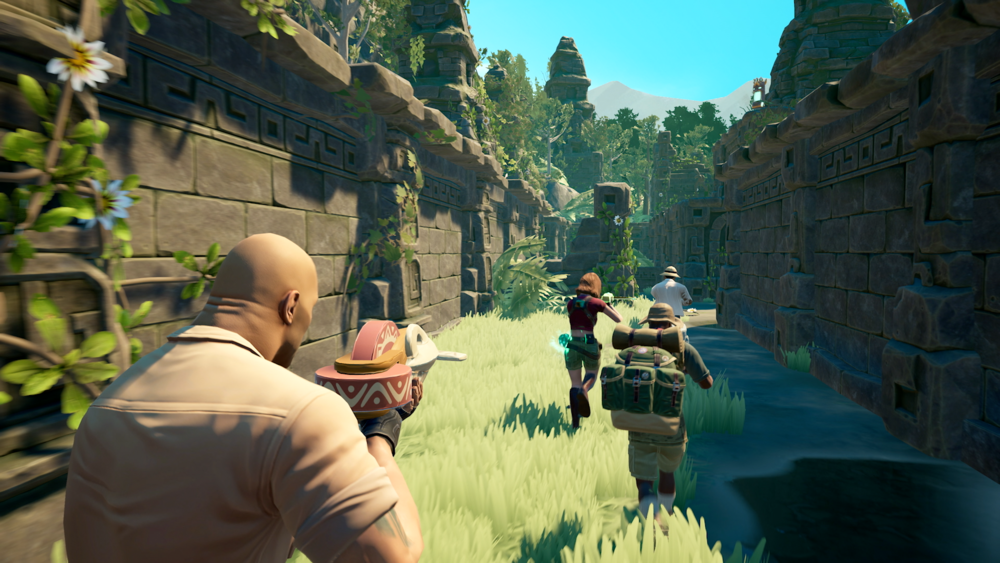 Sadly, this is another sloppy cash grab movie tie in. A perfect example of why everyone thinks that movie tie-ins are, on the whole, a waste of gamer’s time and effort. This is a shame as some of Outright Games other offerings are really good. This just seems like it was forced out quickly in time for the movie, which is funny as this doesn’t even follow the story of the current one that recently came out.
I cannot at all recommend this game to anyone.

Me: Would you recommend this game?

For something different check out our Clumsy Rush Review HERE!