I played the demo of Indivisible a few years ago, and I fell in love with the game. Then NOTHING!! it was as if the project was dropped suddenly in the middle of July the game appeared once more, and I could not wait to get my hands on this one. Was it worth the wait?

The story revolves around Ajna, on her way home, she sees her village on fire and  not only that, but everyone is dead too. A strange and mysterious power is awoken at this time of chaos, and her life has been changed forever. Ajna’s quests for revenge armed with her mother’s axe, she meets people who she can absorb and summon at will. She will find out about herself and the world, but mainly seek how to stop the destruction. 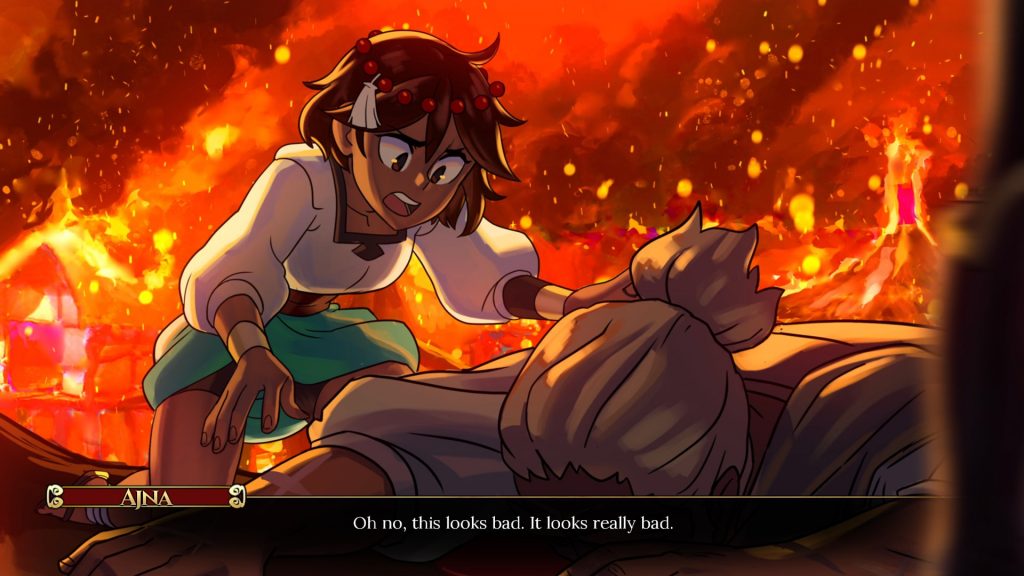 Indivisible mixes two genres together to make something special, not unique just done really well. There are platforming and JRPG style fights.
Anja moves left and right, can wall jump and hang with her axe that is essentially a double jump. As all good platformers, Anja will get more ways to interact in the world. For instance, when Anja meets Zebi the archer, she gets his bow that allows for long-range attacks on enemies to stun them as well as helping with some world puzzles.

The JRPG elements come in a simple yet highly rewarding battle system. On the surface the battle system is simple, each of the four-party members are assigned to either square, triangle, circle and X. There is an action bar that fills up depending on the action points. Once an action point is available press the corresponding button that character attacks. There are also different attacks available depending on the character. For this example, we will look at Razmi the Sherman (also a personal favorite) she uses the sprit of her pet tiger to attack. If the player presses up on the D-pad as they attack, then she puts a de-buff on the enemy. If the player presses down on the D-Pad, the tiger does a guard break attack. These attack all vary depending on the character.

As the party attacks the enemies, a bar in the top right of the screen will fill up, once full this will allow for a special attack from a character, or Anja can heal and resurrect and party members. The bar will fill as long as the player attacks and uses guard correctly. Guard is also simple; the enemies attacks will be signposted and will show who they will be attacking. Pressing the correct button just as they attack the bar will not drop, and less damage is received. There is also AOE attack that will hit the party these can be blocked by pressing L1, this will only prevent AOE attacks.

After enough battles have been won, party members will level up there health pools, making them harder to kill. To make them stronger in attack or defense, Anja needs to find red gems and give them to the monks that live in her head; this affects the whole group.  All the party members Anja meets are sucked into her head and live in a mind-scape that Anja can visit at any time, to talk to different characters. It’s worth visiting every now and then as the writing is excellent, some good laughs are to be had in Anja’s mind.

Overall the game is simple to pick up but hard to master. While still fair with difficulty options to pick from, making it accessible plus increasing replayability. 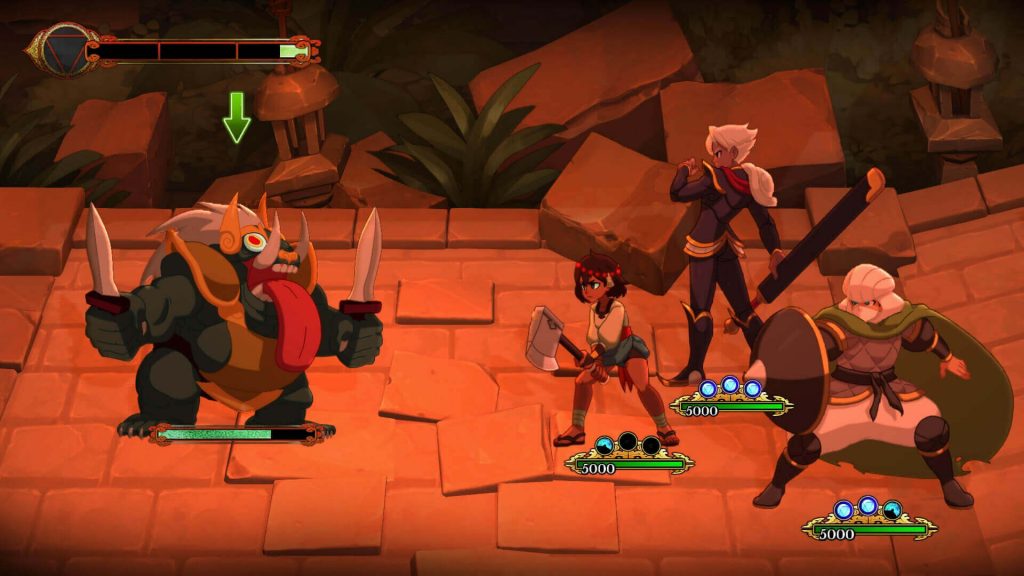 The game is simply a stunning looking game, with its beautifully crafted world. It is as much dangerous as stunning. The characters all look outstanding. Each of them has their own unique looks borrowed from many cultures around the world. The use of colours is excellent, bright and pop from the screen

There were no bugs that I could find, there were a few incidents where I tried to jump between screens and Anja wouldn’t jump its a relatively easy fix. Overall the devs have made a great looking game. 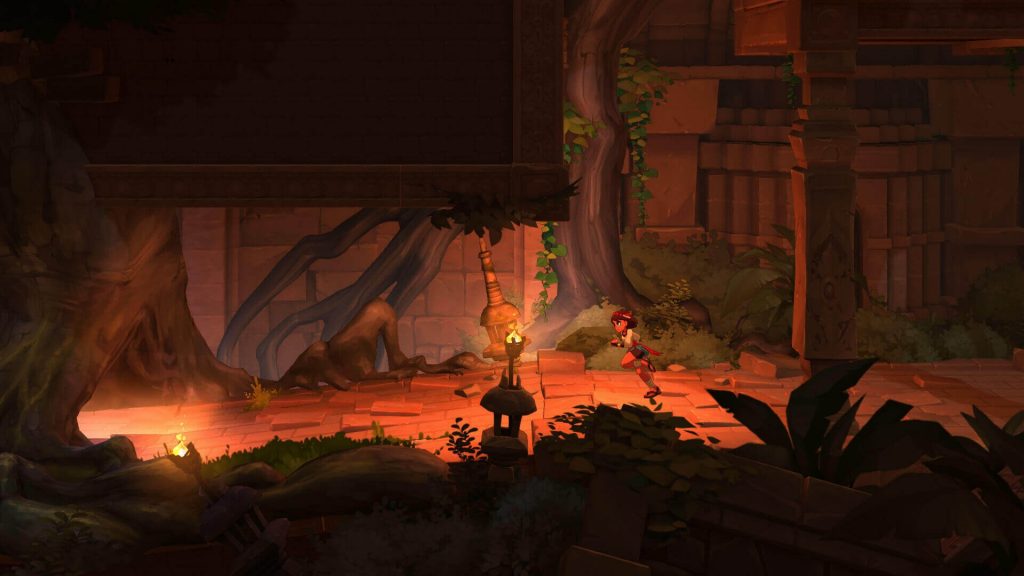 Indivisible has an excellent sound design. Sound effects all sound great, from Anja slamming her axe into a wall to the sound of attacks in the fights.

The music also fantastic, I would listen to it out of the game, so I hope I can find the soundtrack. Where the game does a great job is the voice acting everything seems right, and the character has the accent from where they are based on.
The sound design is fantastic. 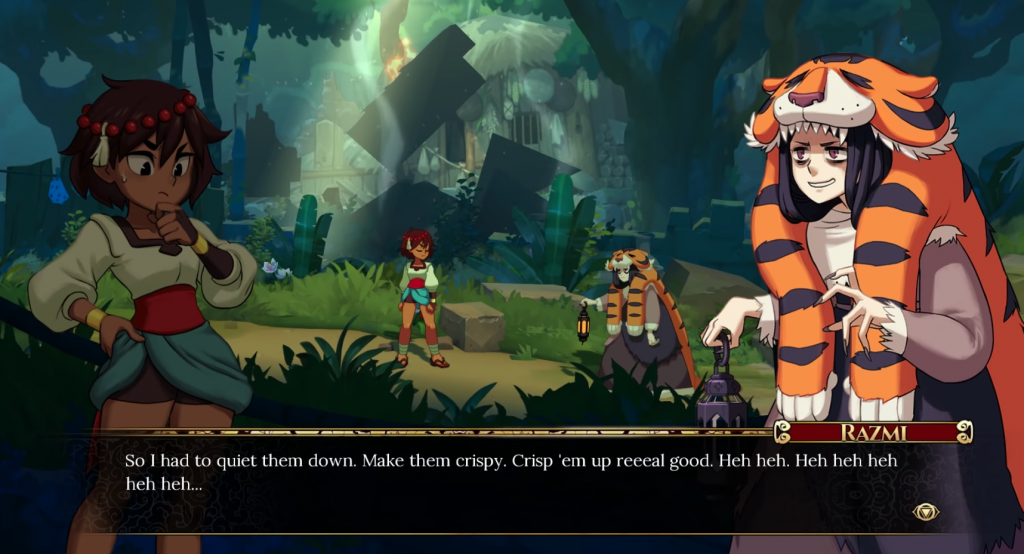 Overall Indivisible was definitely worth the wait from me, I enjoyed all my time in the game. The mechanics are done really well, the overall difficulty is balanced. It looks and sounds AMAZING. It is also not every game that the title is directly linked to the gameplay and story.

This is a definite buy if you are a fan of RPGs and platformers. I recommended Indivisible

Looking for something else with a cute character check out our review of A Hat In Time HERE!