As soon as I started playing incredible Mandy, I knew I was going to enjoy the ride. What we have here is a rather pleasant, relaxing puzzle adventure title that sees you take control of the brother of 2 siblings who’s being lead through a series of dream-like worlds by his younger sister. However, everything is not what it seems… the adventure is interwoven between the realm of dreams and the harsh realities of a tragic event that occurred in the real world. 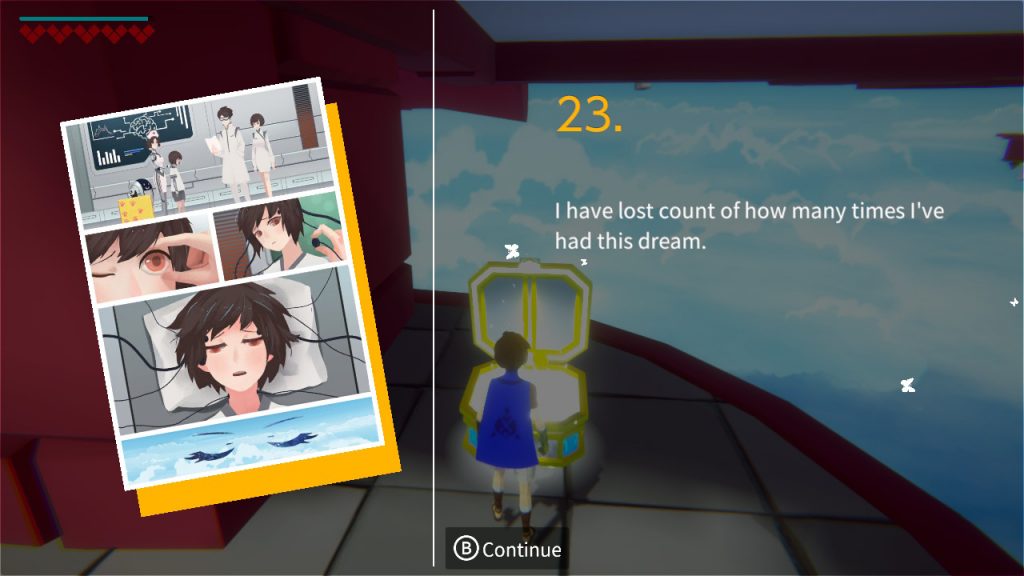 Incredible Mandy takes you through 17 worlds which are diverse and filled with their own unique puzzles and mechanics.

The controllable brother has a range of unique abilities which allows him to progress through the levels as well as the standard move-set of jumping, ledge grabbing, pushing boxes and sprinting. You can also summon a powerful sword at any time; the Excalibur of light which symbolises the power of positive. Not only can this sword be used to attack with, but it also has the unique ability to be stuck into any surface; acting like energy beacon. Most doors require a chain reaction or burst to open, and this is where your swords come into play. You can summon up to 20 swords at a time and place them around the environment, striking them into the ground or walls, or placing them in certain areas to activate switches. You can either slash at the connections between swords or use your burst ability when in close proximity to set off small blue shockwaves that will activate crystal switches and other unique machinery throughout the world. There are lots of different types of puzzles that require the use of your swords. However, constantly summoning your sword will consume your MP, the gauge being located above your health bar. So look out for butterfly springs that will replenish your MP when you’re low.

Sometimes you need to place the swords in far to reach areas; for these situations, you have your bow and arrow to strike from afar. The Switch’s motion – gyro controls can be used when aiming down sights with your bow and coupled with the HD rumble, works quite well.

Puzzles constantly use this mechanic and working out where and how is half the fun. You’re not alone on your adventure either. You will also encounter a robot that needs your help to move around each world via pedestals. The robot can move around by stretching its arms to new pedestals that you’ve activated. Again, working out how to reach each pedestal with your abilities is enjoyable and requires a little thought. Once you’ve helped your mechanical friend though, he can assist you by using his stretchy limbs to move crates, open doors and use other actions to aid you in your adventure.

Levels are varied and diverse to explore with a rather simple art direction of soft palette colours that at times can be really striking and beautiful to look at. The music is also really relaxing and can fade in, out for times of importance while other times you may only hear whistles and sounds of the wind or crackling of lava depending on which area you’re exploring. The game is linear in its design but constantly encourages you forward, making you want to see what’s next. This keeps the player engaged and wanting to continue.

There are boss encounters which can be found at each level by entering a large black gate. These creatures can be massive in scale and fighting them will sometimes need interesting and creative methods; mostly using the environment and your abilities to take them down. While not difficult per-say, I did enjoy these battles and have found a few bosses reminding me of the Legend of Zelda: Wind Waker for the way they had to be defeated; which made me smile.
There are also collectables to gather such as cards and comic panels – furthering the story, movies and achievements. Special mention goes to the animated cut-scenes and its soundtrack which I enjoyed watching and listening to. The soundtrack adds to the relaxing vibes of the game while I was surprised that the game had these anime like cut-scenes sprinkled throughout.

I would definitely say that Incredible Mandy is one of my favorite indie titles of 2019. A totally unexpected surprise that I think more people need to try.
It’s a game more focused on creating a relaxing, puzzle-filled adventure but with massively scaled bosses that are fun to fight. Even after completion, there are collectables still to find with achievements and secrets to discover. 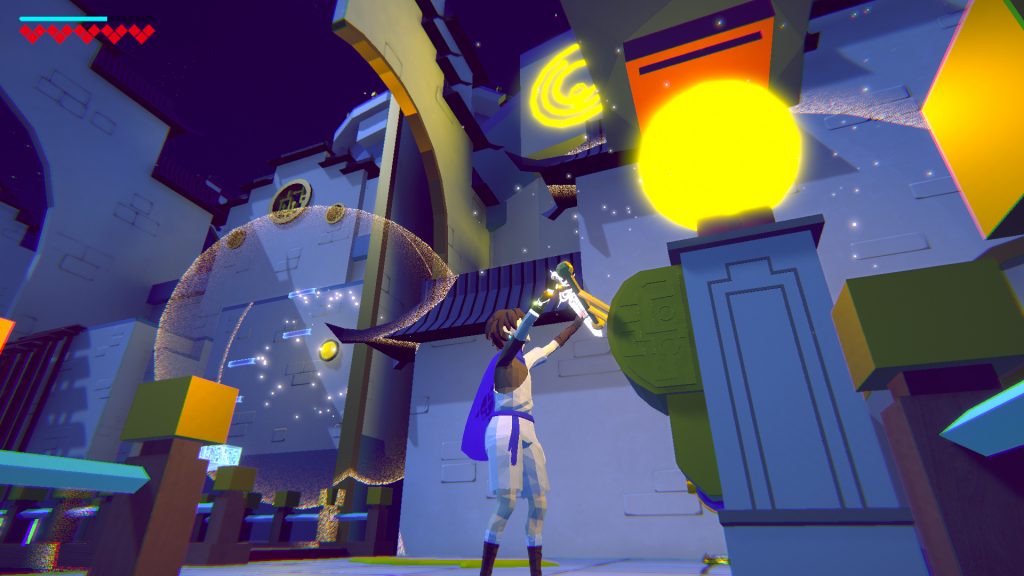 Graphics take on a minimalist look in incredible Mandy but serve there purpose quite well. With its low-poly art style. With some of the areas being visual stunning and beautiful to look at.

I’ve only encountered two crashes which happened when I was viewing the comic section. Other than that the game ran pretty well. The story is up for your own interpretation; it left me with a lot of questions that were still unanswered after I completed the game. But I’ve still got few more comics to collect which should shine some light on that situation. 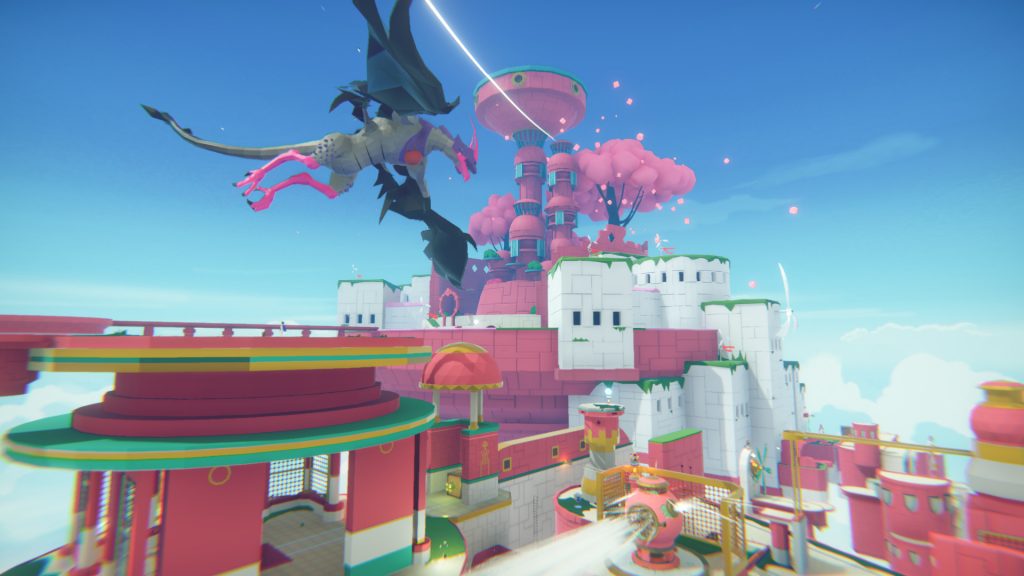 The sound design goes for a  incredibly relaxing and peaceful direction. This sets the scene for this pleasant adventure. 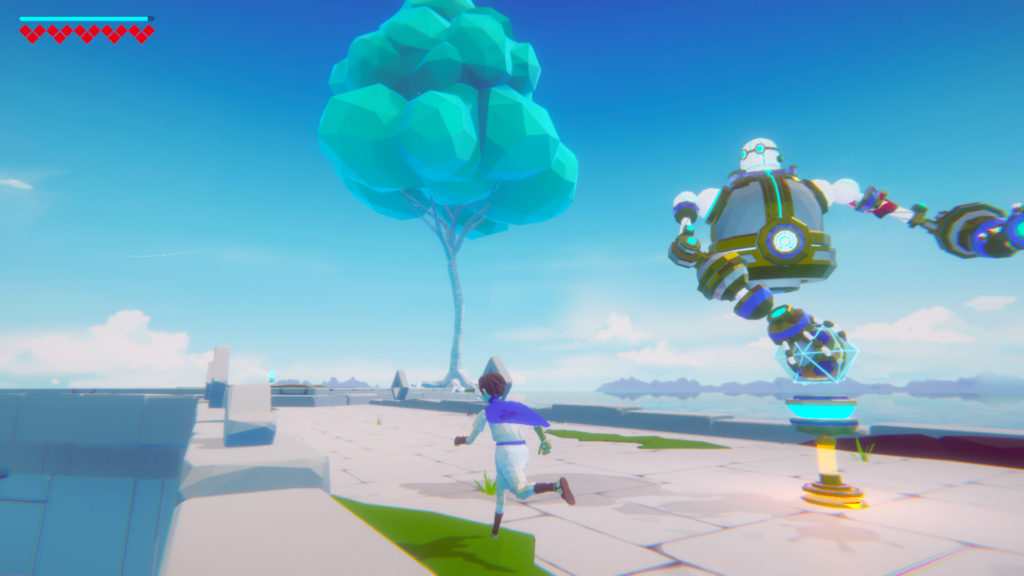 There’s still so much talk about but feel like I’ve said enough without spoiling anything specific. The game overall was enjoyable from start to finish in my opinion. There are enough extra collectables to keep you playing after your first playthrough, and it’s relaxing enough to play in-between other titles. I really want a physical edition now… hint hint.

If you liked this check out our review of Cats Quest II HERE!