Immortal Unchained is on in a long line of games inspired from Souls genre, with hardcore gameplay and unrelenting difficulty. Where Immortal Unchained differs from the hardcore melee, is with the use of guns as the primary weapon. Set in a futuristic world, it takes inspiration from Nose Mythology, Immortal Unchained does not hide its story behind cryptic clues. It wears it on its sleeve no hiding what is happening.

You are the unwilling Prisoner unchained by Aras, and upon meeting the one who unchained you, you’re told you are the only one who can repair the Monolith to stop the End of Times. The Prisoner character has amnesia that could be due to the long imprisonment. The Prisoner is tasked to bring back the three nexus cores of which the Monolith draws its power. Fighting through legions of cybernetically enhanced legions of the dead is only the beginning.

The Story is not too deep or captivating, it severs a purpose and will keep the player wanting to find out more about the world. 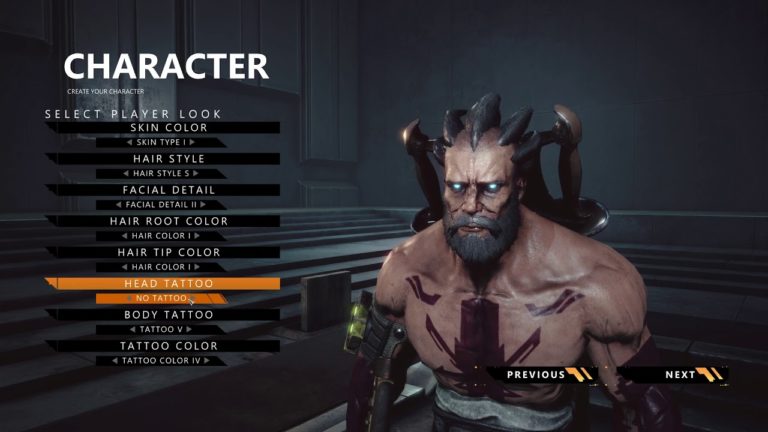 When we talk about the gameplay in Immortal Unchained, there is naturally going to be a lot  Souls comparisons as most of the main mechanics in the game are lifted straight out of Souls series.

Upon starting a game, there are six disciplines (classes) to pick from, each with its a starting weapon class. For example, Tracker has a Carbine with enhanced distance. As well as a starting weapon they have a Shrine (starter item), Tracker gets 10% elemental damage resistance. Along with a shrine and weapon each class has a stat allocation with positives and negatives, one could be strong and have high vitality, but is slower moving and slightly longer reload times. Once the discipline is picked, there is a character customisation screen that reasonably basic but a nice edition even if the male and female models are almost identical.

For anyone who has played a Souls game, the HUD looks familiar, health, Energy, and stamina, in the top left and items displayed in the bottom right. There are even Medical syringes that work identically to Estus Flasks, you may be used to in Dark Souls. These, like their inspiration, will reset when you get to resting points. The one massive difference from a typical Souls game, you use guns not melee weapons as your primary mode of attack. There is melee, but it is a simple single button press. Guns work like they do in most 3rd person shooters, aim with L2 shoot with R2. Each weapon has its advantages and disadvantages. The Carbine, for example, does three round burst, it is accurate but slow firing. Along with the primary fire, each weapon has a Power Attack. These uses Energy this will either do a lot of damage or less damage but has a secondary effect like stagger.

Along with these effects and like in the Souls series, there’s a minimum statistic requirement to use a weapon. Shotguns need high strength where submachine guns need require higher agility. Weapons can be upgraded; each upgrade requires more parts, but increases the base damage of each weapon.

Gunplay, being the core of the combat will leave you with a difficult choice when it comes to how you aim your gun. There is a lock-on and free aim. Lock-on will target the torso and only the torso of the enemy. It usually is not much of a problem on its own, but Immortal Unchained has critical damage as well as limb damage. This can be a disadvantage as other games will allow you to actually change the lock to different parts of the body. The way to get around this problem is using the free aim option. There’s a much higher skill gap playing this way, which can almost be seen as a bit of risk vs reward. You may be able to get those crits, but you may miss. Getting used to a sensitivity that will allow you to aim precisely and look at a decent speed will take some practice, but ultimately will reward your skill playing this way.

Another issue with the lock-on setting is when a group of enemies come close targeting them becomes a bit nightmare, trying to cycle to your desired target while fighting for your life can be challenging. This is why I suggest using the free aim. You may ask why let the enemies get so close? Well the guns don’t have a great deal of distance in their shots. It’s not what you would expect from longer range guns, but I can see why this design choice was made. The game would have been far to easy if you could just pick enemies off from a distance.

When you kill enemies, you collect bits. These will allow the player to level up and customise the statistics of the discipline. Each point costs more bits and will improve specific statistics dependant on where the point is allocated. Bits are used to upgrade weapons and this is done at obelisk, your rest points, throughout the level. Obelisks are the only place where new weapons can be equipped, to start with only two can be carried, but as the story progresses, a total of four can be carried. Once an obelisk has been used, the level resets with all enemies returning.

The boss battles where Immortal Unchained really shines. Die? Yes, learn? Yes, cry? More than likely. The pain is worth it, each boss is set in its own sizeable area, with plenty of room to run away and hide somewhere, or at least dodge the incoming attacks. Each boss is unique in looks and attack patterns. I had a total blast with them.

Overall, the combat can become a bit tedious until you grind your way to the bosses. Although with plenty of weapons to play with and items, there is a lot to make you return time after time. 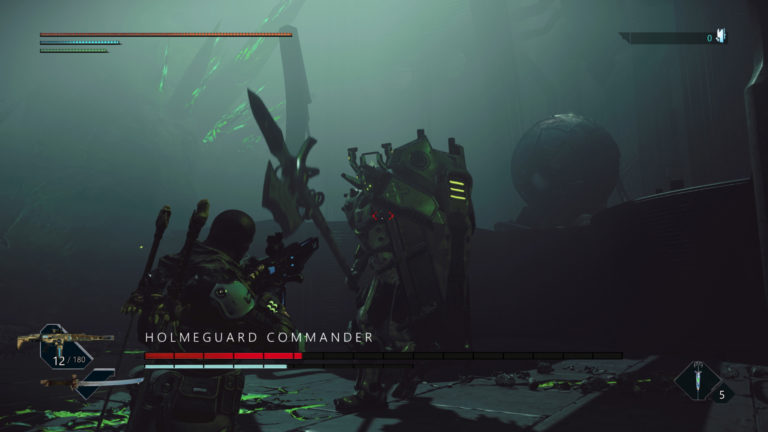 Visually there is a strange mix of really cool looking backdrops and bland world design. Taking a look over a cliff and staring off into the distance with its beautiful mountain ranges and snow-topped peaks is stunning. Turning back to the level and its a snow covered path with a dark brownish rock wall, loses the awe. It does not mean that the game is not good looking; in fact, most of the game is decent looking. It is more when you take notice that the world is not as lovely as it seems.

The same rule applies to then enemies at a distance that look grotesque and freaky and good looking. When they get closer, the textures are more a black mass with a yellow light emanating from them.

I like the looks of some enemies I wish more effort were put in to make them all look as good as the last.

The performance in Immortal Unchained was overall good. There where, however some slow down at times, not anything bad, just now and then noticeable. Some of the hitboxes seem a little off, more so with melee for me, I would swing look like I hit the enemy, but nothing would happen to the life bar, this happened with the guns as well. It is more annoying than anything else, especially in a game that is made to be hard. Apart from the few problems, there was not much else. 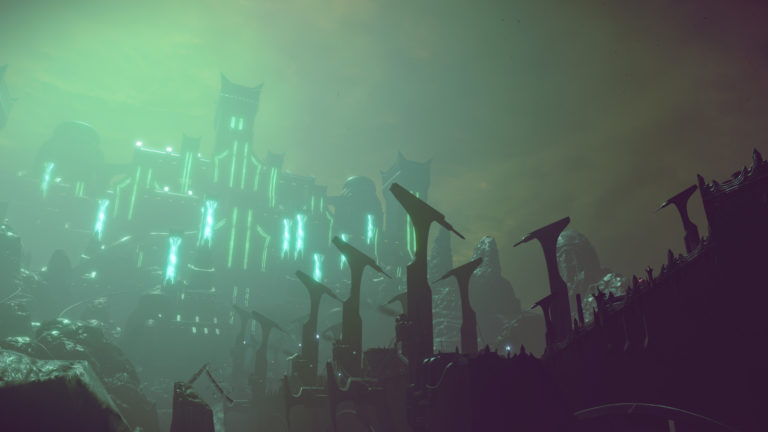 The sounds quality was again hit and miss. With sound effects, everything made a noise when it was meant to, guns, swings, enemies etc. It just all felt lacklustre, as if it needed more, oomph. Make it sound like the gun has some power, or that swing broke something. With the type game it was meant to be there needed to be more aggression and things needed to sound powerful.

The soundtrack makes up for the sound effects most of the time. It is not always at the forefront of the gameplay it is more subtle adding a layer of oppression and sense of dread as you make your way through a tight corridor with four hulking masses heading towards you. When it does come to to the forefront, it is nothing special. It should have been left in the background adding tension, increase it when it is a boss or event.

Overall, the sound quality is not the best but gets the job done. 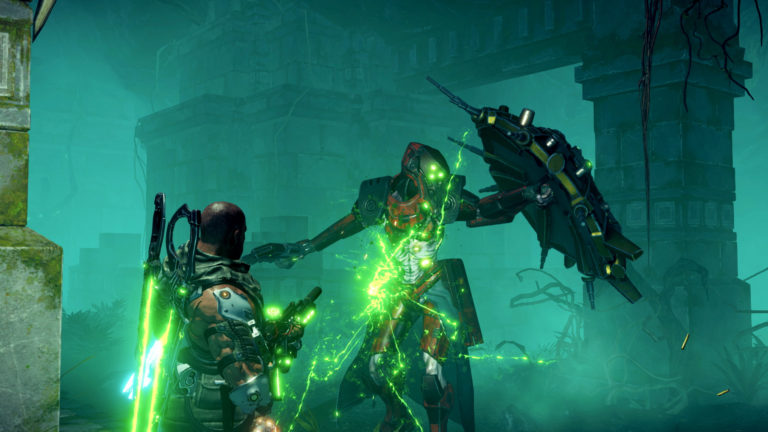 Immortal Unchained had an excellent foundation to work on, albeit with a lot of content you will have seen in other games. There were some good ideas that ultimately didn’t implement all together. It is a shame as the core mechanics of the game were pretty solid. It tried to add something new in the way of using gun combat is a souls-esque formula, but in the end stayed too close to it and not grow into it’s own creation.