HyperParasite is one of ‘them’ games that jumps out at you without knowing much about it. The art style that drew me in right away.

You play as an Alien Parasite that has come to earth in the neon filled crazy 80s. Your purpose is to cause havoc. Take over the colourful cast of characters everything from a street thug to RoboCop (without using the licensed name) and every pop culture reference that could be fit in to this top down Rouge-like twin-stick shooter.
There is a story, sort of, but it is pretty much inconsequential to the fun. 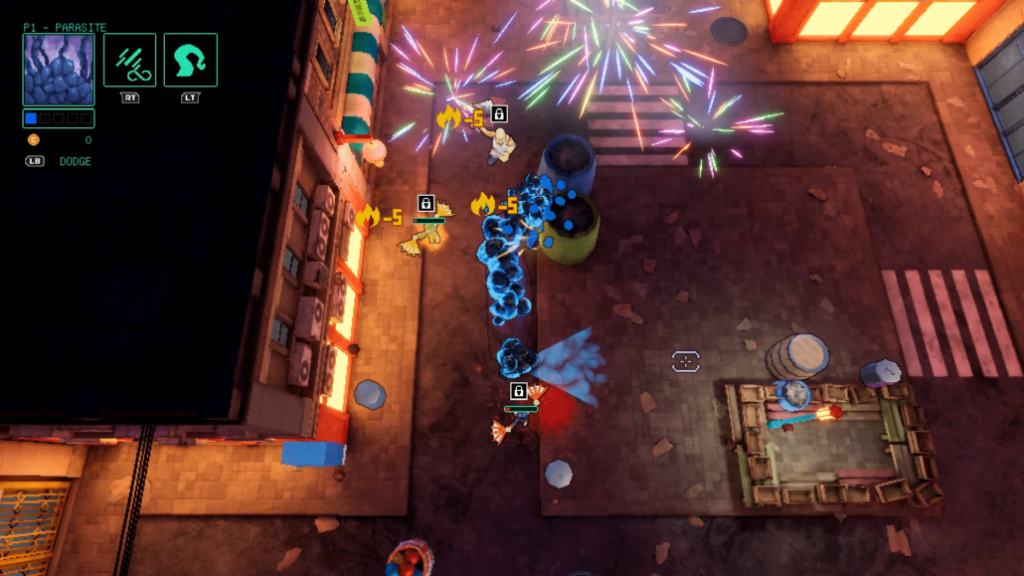 Gameplay is where it is at for HyperParasite. It is a top-down twin-stick shooter with tight controls, a great hook and a fantastic gameplay loop. I am not even the biggest fan of roug-like mechanics to boot.
Starting off as a Parasite or a blue blob of gloop that can shoot a projectile at enemies, as well as, shoot out a clone to trap to take over a character. The Parasite alone is weak and can only take one shot before the run is over.
Once commandeering a side character, the Parasite gets their abilities and health pool. For example, if a homeless man is taken over the Parasite get 10HP, plus a Melee attack with the trolly. Each character has a special mode, the Homeless man send trolly slowly across the screen in a straight line. Once the host body is dead, do not despair the game is not over the Parasite lives on and can take over another body. There are two classes of hosts: shooters and brawlers.
Now with this being a rouge-like you will have to earn the hosts, at the beginning of the game you will have access to the paper girl and the homeless man. To control other hosts, the Parasite must kill an elite version of the character and take its brain back to the strange shop keeper. Then from there put the brain into storage and pay money to unlock it.
There is a very simple upgrade system. This consists of finding a glowing puddle on the floor and interacting with it. There are three stats to upgrade and each upgrade lasts until the run ends.

Health – This allows for one extra hit on the Parasite it self.
Attack – Will increase the attack power and lower cool down of the special attack of the host, as well as increase the Parasites damage.

The maps are randomly generated. An abundant amount of content is available as I am still getting new things I have not seen before.
Co-op mode allows two Parasites to work together and take on the game. This feature is a BIG plus as there are generally two bosses to take out at the end of each level. 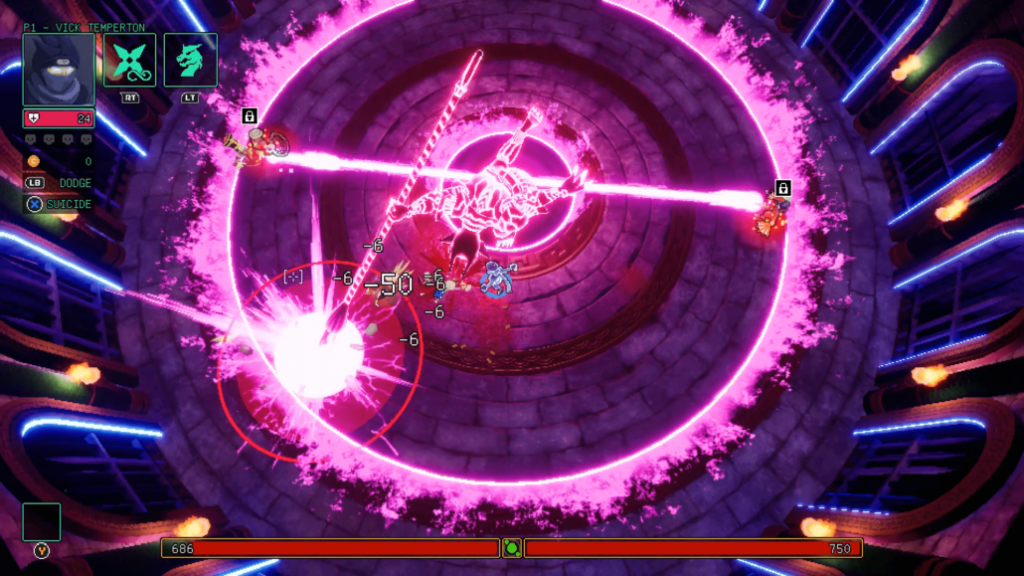 Graphically, the game is simply stunning with its pixelated character models against a highly detailed word. There is so much 80s neon dripping from HyperParasite it is a party for the eyes, not to mention the amount of enemies and bullets you will be dodging. The game is one of the best if not the best twin stick shooter I have played.
The game ran super smooth even with the screen filled with bullets, things exploding and enemies galore. 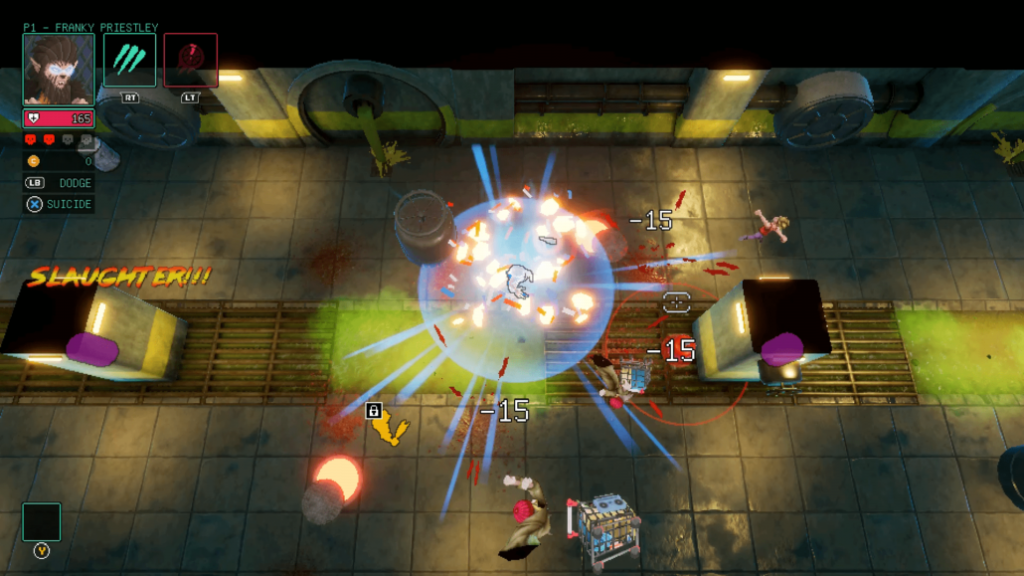 The sound design is once again 80s on point. The music is something out of a movie with all the over the top sound effects you would expect, from glass shattering to the screams of the people you are slaughtering. 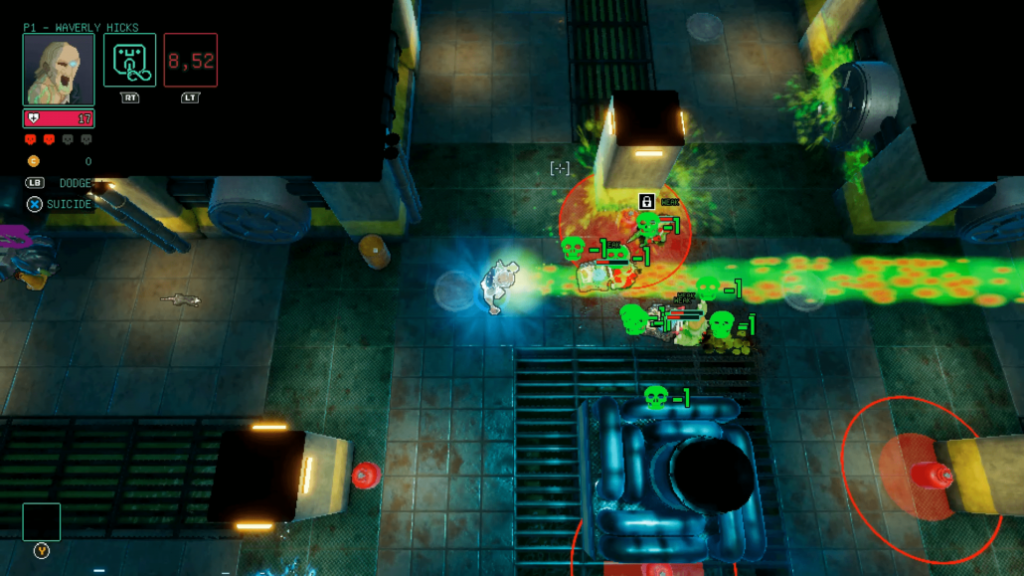 Overall, HyperParasite is everything every twin-stick shooter should be. The creators took the same tried and tested method of game genres and made it feel exciting, new and rewarding. There was nothing I did not like bar being a rouge-like as restarting is a pain at times. Want some fun-filled killing excitement with fantastic characters? HyperParasite has you covered.

Buy this game, you will not be disappointed.

If you enjoyed this check out our review of Panzer Dragoon: Remake HERE!