This is an out and out racer, so no need for a story.

Horizon Chase Turbo, in essence, is a pure throwback to the golden era of racing games. The game not only looks like that but feels and handles the same also.

Here the game focus in on the feeling of the arcade-style games of yesteryear. As soon as you pick up and start playing anyone who played any arcade racing games will be instantly at home here. Accelerate, brake, turn and boost, what more do you need for a racer? The controls are tight and feel great, very responsive. The races are not as straight forward as drive till you win, there is a twist to the formula as racing there car will use up fuel (as cars do). On the track are fuel pick-ups, these refill the fuel.

Along with the fuel are blue orbs to be collected, these orbs will add to the overall race score and add to getting the super trophy for the track.

The courses are generally over quickly giving the one more race feel to the game. Its quick arcade races allow for plenty of tacks to be done in a short time. Massively increases the replayability of the game. As you move from track to track they are marked on the world map as a node, and depending on where you finish, the orbs will either fill the node and make it gold or leave a gap. If you are anything like me, you can not have a gap. I keep racing till the gap is gone and the node is gold. On top of the replayability, there are; 12 Cups, 48 Cities, 109 tracks, 31 Unlockable Cars and 12 Upgrades. The amount of content alone will keep players coming back time and time again.

There are several modes to play within the game;

World Tour – What would any good racing game be without a championship to play and win. Globe-trot around the world and try to claim the top spot on the podium. Each race has 20 racers, you will start dead last in all races, and you will have to fight your way to number one. The AI at times is pretty aggressive while you try to overtake they will block the way. Let us not forget the bonus races that get all the cars an upgrade, once you get enough points.
Tournament – This mode the player selects the area for a race and then three courses are picked, just like in Mario Kart.
Playground – This mode is equivalent to a challenge mode in other games. The challenges are rotated and changed and include adverse weather, reverse tracks and no upgrades, and so on.
Endurance – This mode is unlocked after completing the world tour. The clue is in the name.

Think you are the best racer out there? Why not do some multiplayer and find out. There is a split-screen mode for up to four players, something more games should have. For me, the big draw was going online and playing and hitting them leader boards. Along with me destroying everyone else online, well, that was the plan half the time I just sucked. I am not a massive racing game fan, but something about Horizon Chase Turbo just felt right, and I actually enjoyed it…

In short, I loved Horizon Chase Zero, its quick fast tracks, plenty to keep you occupied. 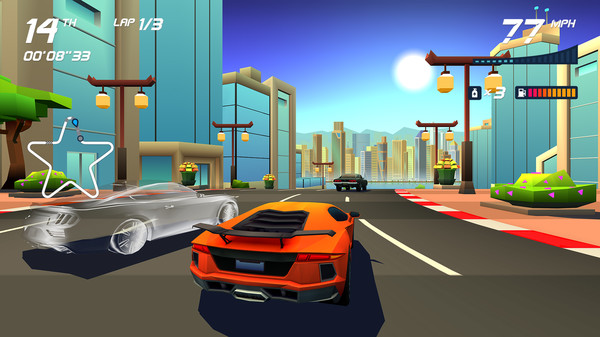 Visually Horizon Chase Turbo has stuck to the early ’90s style of less detail of the car models while still being instantly identifiable. The theme carries through to the track its self, simple plain buildings lamp post, trees etc. The game uses the low poly design expertly, this piles on the nostalgia of playing racing games back on the SNES in particular Top Gear. Even the ground with its alternating colours giving the feeling you are going top speed. The colours are bright and bold, and in your face, Overall the game looks great.

Adding to the ’90s racers feel, the developers use the same sort of rotation on the upcoming track (as if the road is spinning on a barrel). In turn, making the races feel faster and make sure the player is playing attention.

No problems at all with the game it was perfect off and online. 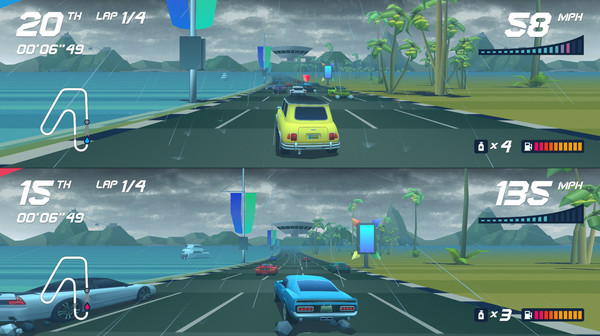 The sound effects are decent the cars all sound like cars with what seems like some slight differences dependent on upgrades and care model. There is the screeching of the tires as you take a turn way to fast. The pick-ups make a fairly pleasing ping, bumping into a car makes a solid bump noise. There is not much to the sound effects after that.

Where the game shines in the audio department is the music, oh gosh – best music in a racer since GT3. There is some classic racing game inspired synth-style music, to the rock and roll guitar epics. Even though it is possible to tell there is more scope to the tracks than in the early ’90s, the developers keep the overall feel 16-bit.

The soundtrack is simply amazing. 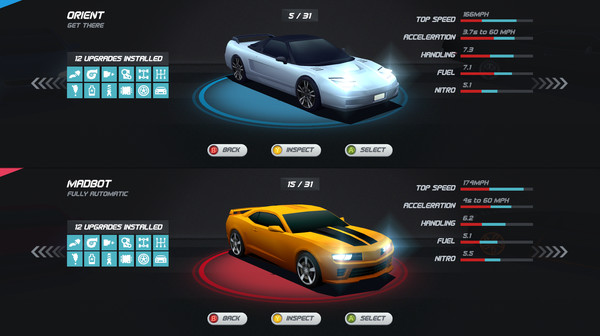 For me, not being a big racing game fan and enjoying Horizon Chase Turbo as much as I did was an unfamiliar feeling. It was something I hand not felt since I played GT3 on PS1, so for this game to bring back that feeling was great.

Overall the game is fun, exciting and has hit the balance of race time and enjoyment perfectly. For myself one of the best arcade racing games that have been made in years. If you enjoy racing games, this is a must buy. Not too fussed, get it on a sale you will not regret it.