Heroland is a funny wee game from the graphics to the story etc. this for me was the draw but was I disappointed? Let’s find out.

You play as Lucky, a guy who is down on his luck, so he decided he wants a new job. He gets his new role at Heroland, a place where anyone can be a hero. Well except for Lucky, he is just a tour guide. It is up to Lucky to lead the ‘Heroes’ and guests to find treasures and defeat the Dark Lord. Except not everything is as it seems at this wonderful resort of heroes.

The story is good and does not at all take itself too serious. I enjoyed it with all its madness and crazy characters. 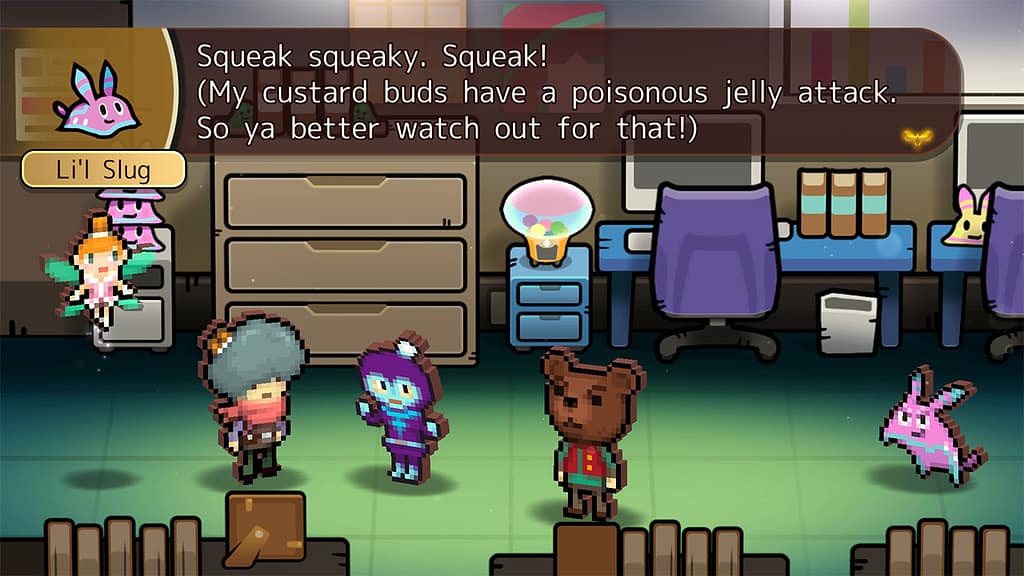 The gameplay takes a management simulator and dresses it up like a JRPG with a light sprinkling of a Visual Novel. Let’s go on a Tour to explain how this works.

ROOM 1
We will tackle the first enemy, the Visual Novel (VN) as this is the most straightforward fight.

The VN aspect comes in to play with the park map screen. As is a VN, there are generally points of interest the player can pick. There will be conversation explaining story, side quest or sometimes a choice to make. Here is the exact same, there will be highlighted spaces on the map that Lucky can go between tours and talk to people or buy items. The game even makes a joke about the limited replies Lucky can make. It gave me a chuckle.

The VN element is also how a Tour (dungeon) starts by selecting the point.

ROOM 2
In this room, we will look at the JRPG side of the game. Again simple but a little bit more in-depth.

As said in the story, Lucky does not participate in the fights. He is the tour guide for his Heroes. The battle system works by a few simple sets of instructions that Lucky can give out, nothing fancy just a general instruction like all-out attack, or concentrate on regular attacks and so on.

In almost all JRPG’s there is a turn meter that builds up under the character twice, one to think about the attack and the other is casting or performing the attack. The attacks and duration to wait for an attack solely depends on the equipped weapons of the characters. Once a battle is completed, treasure might drop as well as coins. The treasure can be given to a party member or taken by Lucky. It is then on to the next room.

Not all rooms are fights; there are story elements as well as places to repair weapons. If you have not caught on most of the activities are automated.

As Lucky is a resident of the park, he will get his own room. Any Treasure he has taken himself can go into his room to make it his own and less depressing. It is strangely fun.

ROOM 4 – BOSS ROOM
Here we get to the meat of the game, the management simulator.

Lucky does not just give out orders; he can direct or help the Heros. When a party member is thinking about a move, Lucky can tell them what to do (he can do a few other things, but these are the most important). Also, if someone is low on health, he can use an item and heal them. Once Lucky has does his thing, he is then on a rest while his action bar fills up again. This has two functions, each aa important as the other.

Firstly – Helping by picking a move or healing can finish off a fight or keep a party member alive, simple stuff.
Secondly – Helping a character will make them happier and have a better time. Making the characters happy is more important than the first.

Making the party happy can be done by – Helping them out in a fight, or giving them treasure along with finishing a tour. Once the tour is finished all characters get EXP and level up. Along with Lucky who get EXP from the happy faces he gets. So make sure the Heroes are HAPPY. Collecting the coins act as Lucky’s pay after each tour.

With this being a management sim and the game is not serious. The Dev’s make this point clear by Lucky’s manager when he is told he has to supply all the weapons, equipment, potions and keep everything in good working order (as weapons will break). It is also Lucky’s job to pick the four Heroes going on tour out of a possible 20. For story purposes some tours have VIP these cannot be changed out. So all the money made is to upgrade the Heroes like in a JRPG. Lucky is also paid in live Starfish….on a side note.

TREASURE ROOM
Overview of the main areas of the game.

None of the mechanics within this game are complicated to understand. However, they do feel alien to start with, being in a dungeon and not fighting took a little bit of getting used to. Once I got in the swing of things the game is a total delight to play and all the aspects just meld together to make something unique and special. 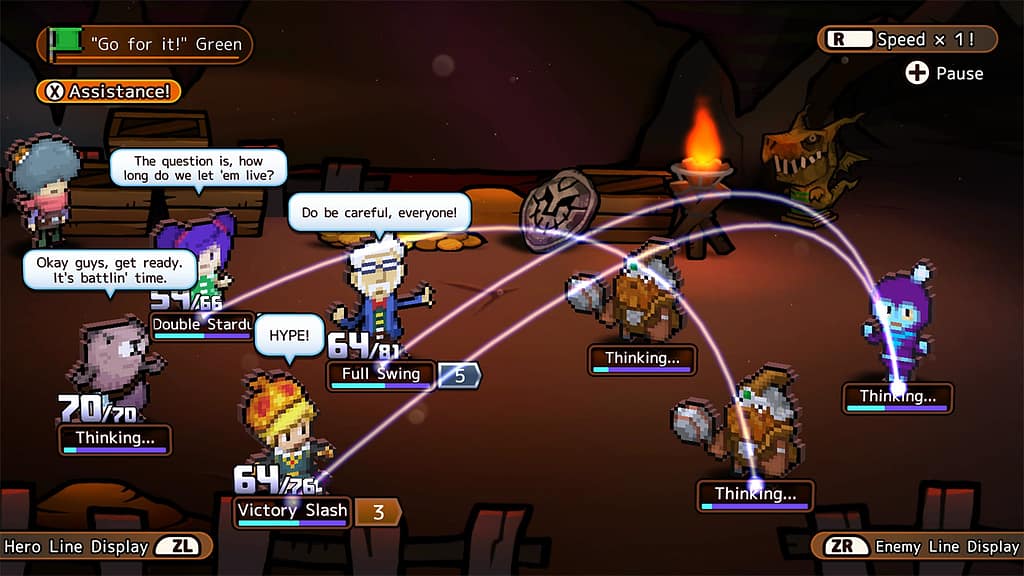 Heroland has a great 2D/3D esthetic, with each character being a pixelated 3D character. In short, it is an essential pixel sprite that’s been stretched to have a 3D style shape. This style is fantastic different and makes characters feel familiar. Along with their funny walking animations, the games feel is excellent. The backgrounds are all lovely, rendered, bright and well detailed. As with the gameplay, it makes for something unique. 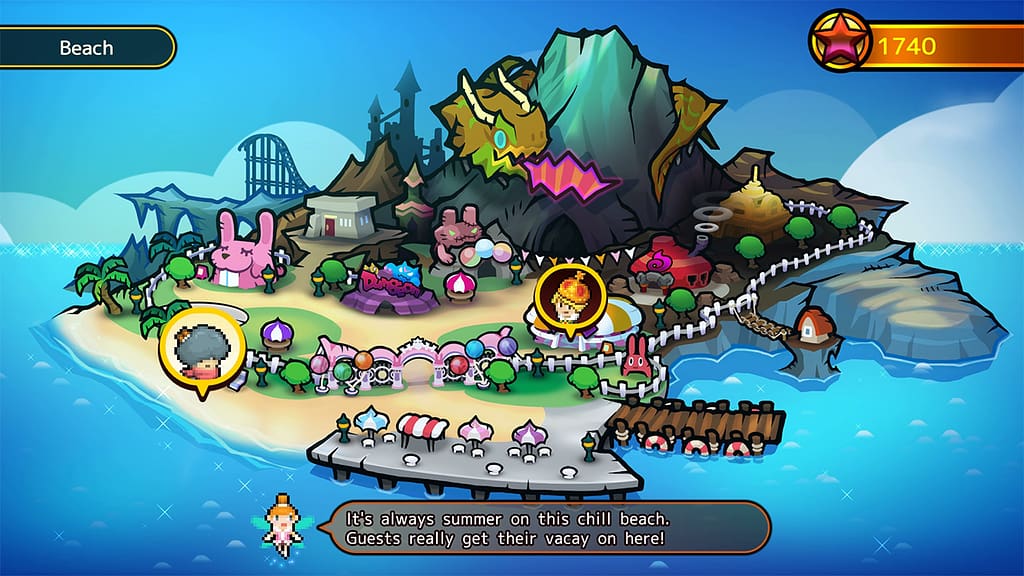 The sound design in Heroland is possibly its worse feature. It does not mean that they are bad. For me and my time with the game, the sound effects and music felt average. I liked them, but with the uniqueness of the other parts of the game, I wanted something more. Voice acting would have made a considerable difference to the sound design here.

Overall Heroland is a great management sim that does so well to hide it as a JRPG. The story setting is fantastic and unique, along with the art style used. There was not much to grumble about with this title except sound design. I am sure the more hands-off approach to the battles will put people off, but I must say give it a try it might surprise you.

I have to recommend this one it’s different, funny and a great wee game.