Hardcore Mecha will be available in the west at some point with Arc System Works publishing the game when it’s due for release.

It is A.D.2219, Mars launches an attack on Earth, leading to a worldwide crisis on a global scale. The Mars Rebel Forces launched the first wave of attacks on all the Jump Stations cutting Earth off from the space colonies, winning the Mars Rebel Forces a massive advantage. The Rebels are ready to take over Earth. All is not lost for Earth as the United Nations Forces have amassed their forces and are almost ready to launch a massive counter-attack.

The story is decent enough with parts left undeveloped, and if you are a fan of anime, you will no doubt love the action and the cut-scenes. 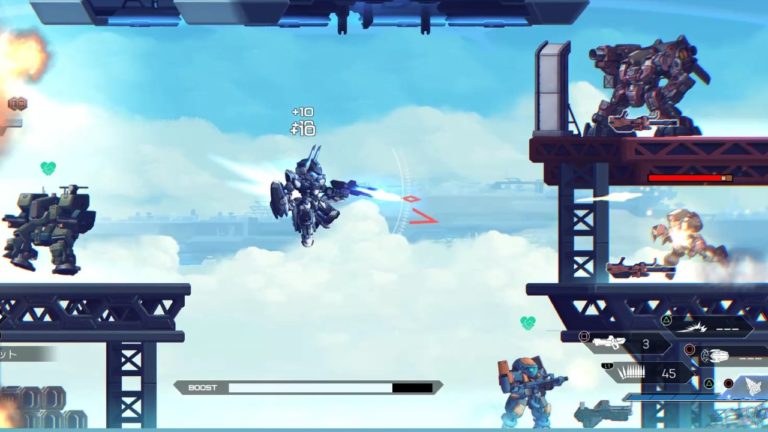 Hardcore Mecha plays like all other 2D platformers, but is that a bad thing? It’s platforming sections are split into two parts; being in the Mecha and going on foot as the pilot.

When starting Hardcore Mecha, the controls are simple enough to be able to pick up and play. There are a few little twists to make the game it’s own. The aiming system is a bit of a strange one using the left analogue stick to move left and right, but also it is used to aim up and down. When I started playing this mechanic was challenging to get used to, after the first few levels, it somewhat clicked. It was not, however great, but it got easier.

The Mecha levels are pure chaos. Fast pace shooting and exploding your way through each section. You’ll fight some hardcore boss battles against other Mecha. These battles will provide you with a stern but satisfying challenge. Progressing through each level will sometimes require you to complete objectives, like killing a specific target, to get to the next section. And obviously, besides the frantic shooting, there is some platforming sections that will challenge you also, like the dreaded electric fences!

There are four types of Mecha suites;
Assault – Jack of all trades range and melee attacks. With decent mobility.
Artillery – Slow-moving and firing but high damage.
Hi-Mobility – Transforming Mecha for high-speed attacks, it can also fly.
CQC – All Melee attacks.

All in all, there are around fifteen different Mecha styles; each one is amazing looking. The enemies comes in all shapes and sizes, but all follow the standard enemy types. There are the foot soldiers that can be shot or stood on (my preferred way of dispatching them), there’s lightly armoured and equipped Mecha, these are just cannon fodder, and then the brute types with a shield that needs destroyed as well as stationary rocket pod, tanks plains. Nothing new or exciting, but work well in the game, in terms of keeping the player engaged.

The pilot levels work more like a stealth game having to sneak around and making sure each shot is well placed, and each attack is planned, as the pilot is not as robust as the Mecha (surprising I know!)

If that is not enough, tthere’s a slight RPG element to the game with the Mecha’s levelling up with each enemy destroyed. You’ll be able to get stronger and take more damage. The Mecha’s can also be upgraded with modules that will directly affect the stats. For instance, Light power armour – improves the health of the Mecha. These modules need to be developed to equip them, and development costs money also. The system works like a skill tree, as you unlock one module it will open the one below it. There are also super powerful, super flashy, super moves that can be used once your energy bar is full, which increases as you fight. Along with A LOT of weapons; weapons are acquired by finding blueprints that are randomly placed throughout the game. Then the guns are purchased with money received when killing enemies.

Hardcore Mecha also supports multiplayer. I didn’t manage to play this mode as I could not connect to a game.

Missions can be replayed in order to get the best rank possible so, if you are the type of person who wants the best scores there’s endless replayability here. Overall the gameplay feels excellent and plays superbly, I enjoyed the content and the singleplayer game lasts around 8 hours. 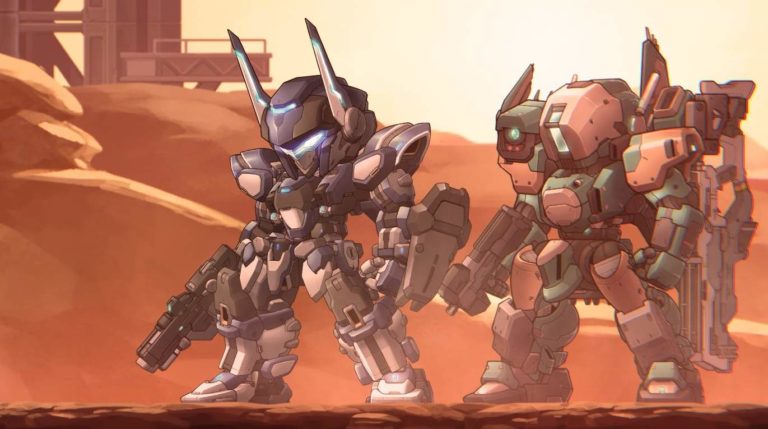 Hardcore Mecha’s visuals can be summed up in a few words ‘Playable SD (Super-Deformed) Anime.’ Before I carry on, I am sure some of you are thinking ‘Keith, what is this SD thing?’ SD or Super-Deformed is an anime art style where a typical proportion character is drawn smaller, generally with a bigger head and shorter limbs. In Hardcore Mecha all the Mecha’s were drawn with realistic ratios then squished down. The game is beautifully crisp and stunningly detailed.

The game is set in a 2D world with 3D like animations. This is done by 2D Rotating-Animation to give the illusion of 3D animation. The Mecha’s are all colourful, stunningly rendered and detailed. The fact that the Mecha’s were drawn in full-size first meant that all the detail you would expect from something like ‘Gundam’ is there, only shrunken down. It’s still easy to see all the movable parts of the Mecha when up close. The backgrounds are stunning; there are six different layers of detail added to any one part of the level to give a rich detailed look. Visually the game does a good job of making the tone as close to a war as possible.

The energy style laser shots that comes from the guns pop out from the screen and look convincing. Using heavy artillery looks and feels like heavy artillery, the explosion from barrels along with the smoke plumbs, mixed with the screen shake give you a feel of power. Along with this, the Mecha will jerk back and be moved back a few steps, all their elements combined feel like a shot is as powerful as it should be.

In my time playing, I did not notice any significant bugs. The game ran smoothly and flawlessly.

Overall, the graphical and playable quality is something I would expect from some of the more prominent names in the gaming world. 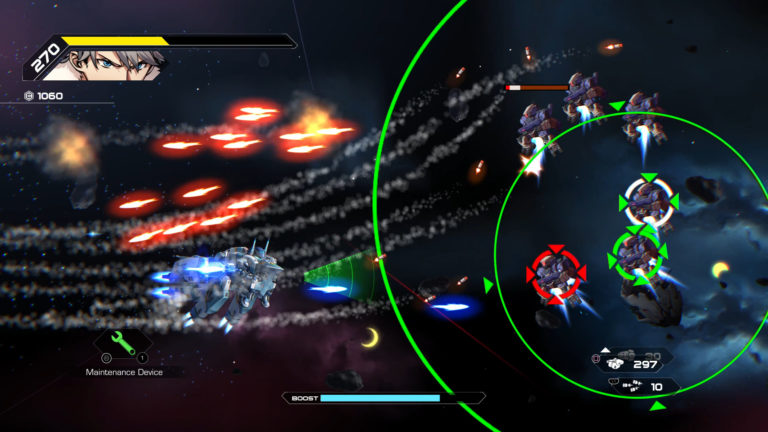 The quality of the sound design is downright outstanding, from the booming footsteps of the Mecha to the powerful shots fired. Everything with the sounds of the Mecha’s sounds spot on, to the thrusters firing into action, to the melee attacks and the swipe in the air. In some parts of the game, you will play as the pilots, and all the sound effects are toned down showing the contrast between man and machine.

The voice acting on a whole is perfect for a game with this look and feel. It has all the usual tropes with the loud screaming as fighting, to the eustatic character the sombre one, the A-typical mission control even if you do not like anime you will still enjoy the quality of life given to each character. The voices are all in Japanese, and there are English subtitles. The general translation is generally not to bad, but there are a few glaring mistakes.

Music also is of decent quality and not something that is overbearing, but iadds to the atmosphere and feel of the current level and mission. 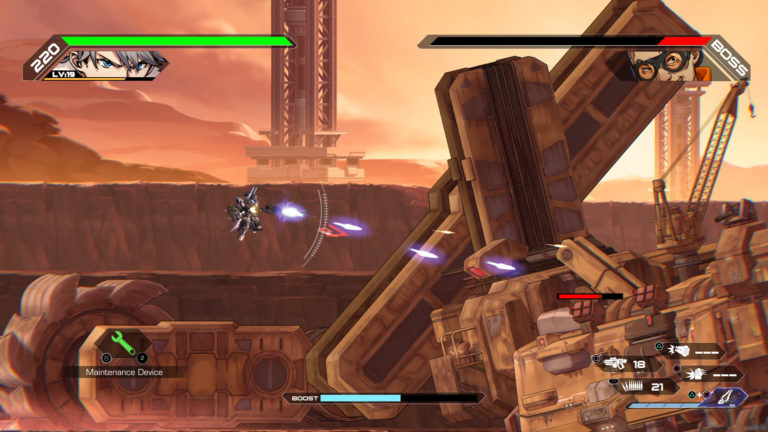 HARDCORE: Mecha is yet another shining example of what a group of talented individuals can do when together. After playing the game, there is no doubt this game is labour if love. Everything plays excellent and feels great.

It is not perfect as no game is. There is that aiming system that for me took too long to get to grips with, some poor localisation, this is easy over looked.

As a whole package HARDCORE: Mecha is a must-buy for anyone who likes shooters, mechs, and platformers. With the bonus that the Japanese release already contains English subtitles, if you do not mind a digital download, you can get it before most of the West does.

If you like this review check out our review of Tiny Metal: Full Metal Rumble HERE!