The story of Gun Gun Pixies is well…interesting. Two aliens Kame-Pon and Bee-Tan have been sent to Earth for a top-secret mission to save their planet of Pandemo. Their world is facing a crisis like no other, and they are on the brink of collapse; everyone has forgotten how to create meaningful relationships. It is up to these two military dropouts, who are friends, to spend six months in a girls dormitory to learn how to form meaningful relationships.

From the get-go, the story is weird and a mess making no coherent sense. It does get better after the third chapter and slightly more consistent. The writing is full of Yuri jokes and in fact, is really well written in places.

The best feature of the story, as well as the game, is the fact it tackles real issues in a not so serious manner. Gun Gun Pixies gets morals across exceptionally well because it deals with a health-related problems, for example dieting and eating, and how important it is to eat healthily and not use fad diets. I was shocked to learn this lewd third person shooter has a not so hidden message on health. 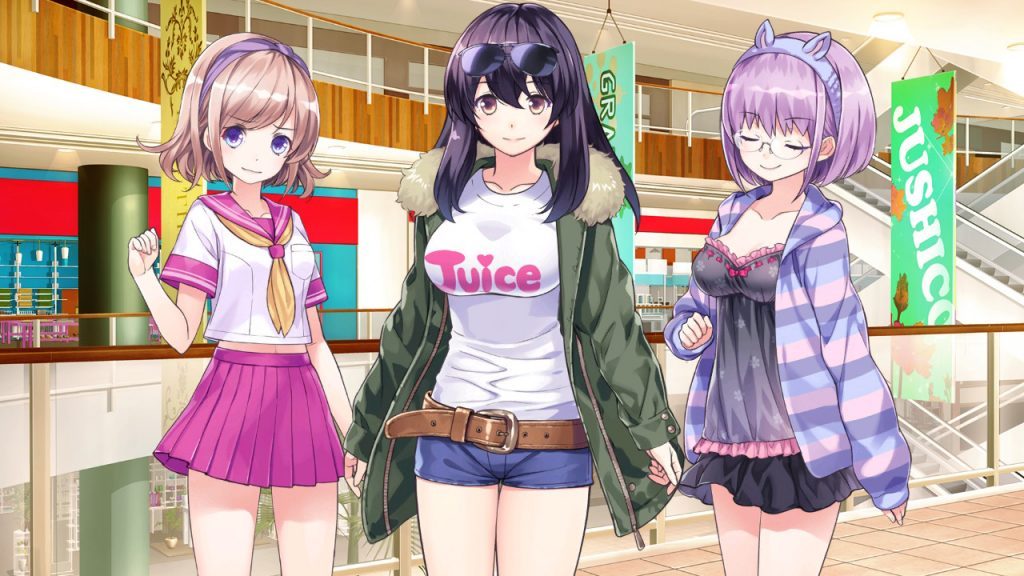 From a gameplay standpoint, Gun Gun Pixies is weak. It also shows its age as well as the limitations of being a PSvita game.
Most of the game is played in two main parts with a few extra bits added. There are the visual bouncy novel parts and the simple 3rd-person shooting areas.
The visual novel areas set up the story in the chapter. These are filled with perverted jokes and every anime trope that can be squeezed in imaginable. The narrative areas are where most of the best parts of the games happen. The interaction between Bee-Tan and Kame-Pon are great as they are so chalk and cheese. Bee is a jokey pervert and Kame is a straight arrow, all work no play. Seeing these two interacts makes for some comical chats.

Then there is the 3rd person shooting parts; these mainly are just running around and shooting happy bullets in the sensitive parts of the girls in the dorms. Until the endorphins are released four times and you make the girls pull funny faces and feel weird. There are a few more things to do in the level but nothing deep enough to make the game majorly fun. The dorm girls shoot out stars and balls in self defense that will chase the Pixies to do damage. Why? No idea to be honest but do we really need a reason? The game also throws in squids to get in the way of the Pixies’ jobs too.

Coins are placed throughout the dorm based levels, They are used to buy new outfits, guns and undies but the only thing that will make a difference in gameplay are guns. There are three bullet spread and one big bullet shots, each with different stats, magazine size, bullet damage and reload speed. The gun is really up to the players personal choice. The rest of the items that are bought and equipped are fanservice only.

Each level has verticality with plenty of places to jump and traverse, and it will be worth the time to explore the level as there are loads of currency as well as glowing circles. These circles have two purposes one, superpower shots and secondly refill health.

There is no health indication on screen, but the Pixies have five hit points. The clothing of the heroes, or should I say the lack of clothing, indicates health left, . From fully clothed to naked each hit more comes off and the pixie pulls a sexy pose.

I save the best till last, at the end of a chapter, it is time to join one of the human girls in the bath. Where for some reason the girls do not just sit in, they strike poses, bend over and so on. The tub is used as a bonus level, the more of the sensitive areas shot, the more bonus coins that will rack up.

Unfortunately, the mechanics of the game are clunky and unresponsive. Everything is more difficult with these lousy control. It again shows its age and the limitations of the PSvita. It would have been beneficial to overhaul the controls. Unfortunately, we didn’t get this, but the game is enjoyable if not frustrating to play. 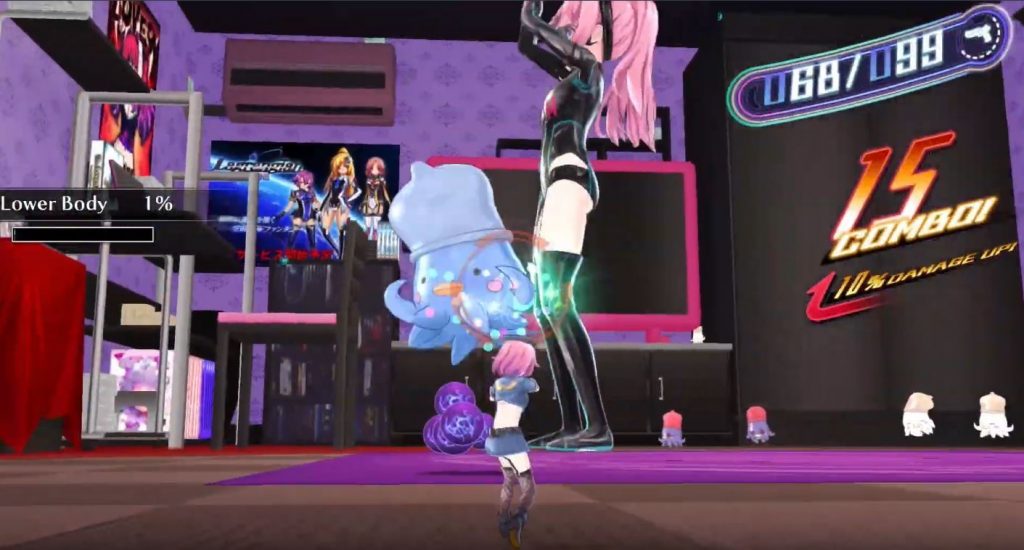 Gun Gun Pixies is anime in design hitting all the major cliches associated with this style. It is still evident to see this was a PSvita game with very simple textures and reasonably empty rooms throughout. The talking is done with a visual novel style presentation with static characters moving mouth and strangely jiggling boobs. Everyone right before speaking needs to jump up and down, naturally.

The visuals are fanservice to the MAX. Crawling under a set of draws leads to a straight upskirt shot of the undies you have equipped. After a pixie gets hit, they start to lose their clothing and pull seductive poses after each hit.

Overall the graphics are dated and could do with an upgrade.

The game plays fine, with no significant bugs or issues that I noticed. 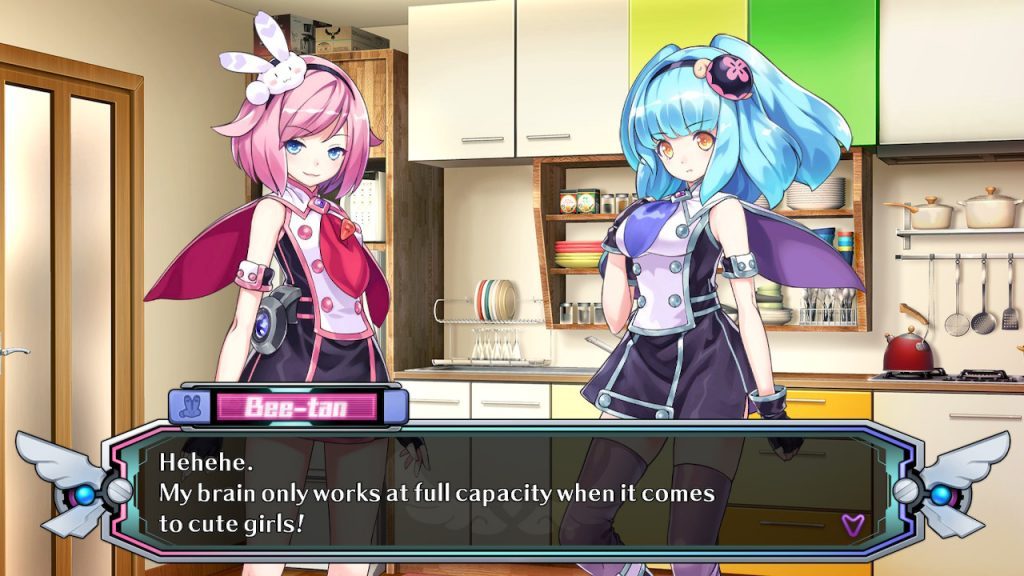 The music is a bit repetitive. There are some good tracks, but unfortunately most of them are generic and get boring quick. The sound effects suffer from the same, with repetitive gun blasts that all sound the same regardless of the gun equipped. There is also a strange bouncing sound from weird balls that home in on you.

Voice acting done saves the whole sound effects side of the game. The voice actors do an outstanding job throughout the game’s narrative, especially Bee-Tan, she is the significant comic relief on the game.

The sound design is nothing that will stand out among the vast array of games on the Switch, but they do a decent enough job. 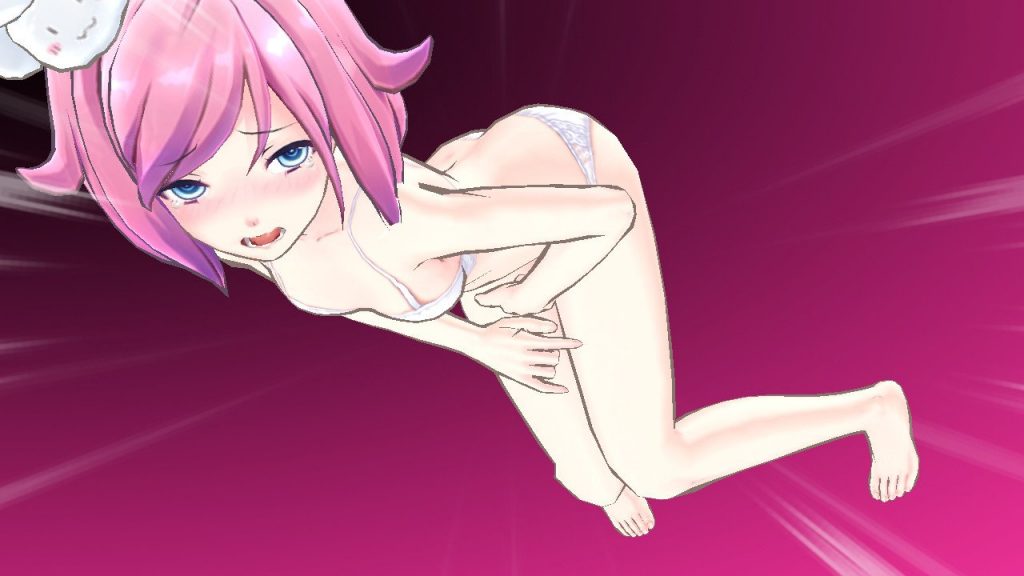 On the whole, Gun Gun Pixies is a run of the mill anime-styled third person shooter. The fact that the game has an unexpected underlying health-related message and the narrative is well written, saves and overshadows some of the problems the rest of the game has.

I enjoyed my time with the game, but unless you are a massive fan of fanservice, I will wait for a massive sale because the game is on the expensive side.

Check out our review of Utawarerumono Zan for more anime style action HERE!