Greedfall is one of those games that had the hype, but can it live up to the hype? Coming from the developers Spider with their past games; The Technomancer and Bound by Flames to name a couple, these games were not the most well-received. Would Greedfall break the cycle and get decent reviews, or would it carry on with the average scores?

Set in an alternative 17th Century Europe, the Malichor Plague has spread among the population and it is incurable. With the ever-dwindling population, it is up to our hero to travel to the remote and almost hidden Island of Teer Fradee. An Island that is free from the Malichor Plague and full of magic and life, to find a cure.

Not the most imaginative of stories, and it does go all over the place with no real explanation of a lot of the game’s world, but it did strangely pull me in as it progressed, even if it is a little simple and confusing. 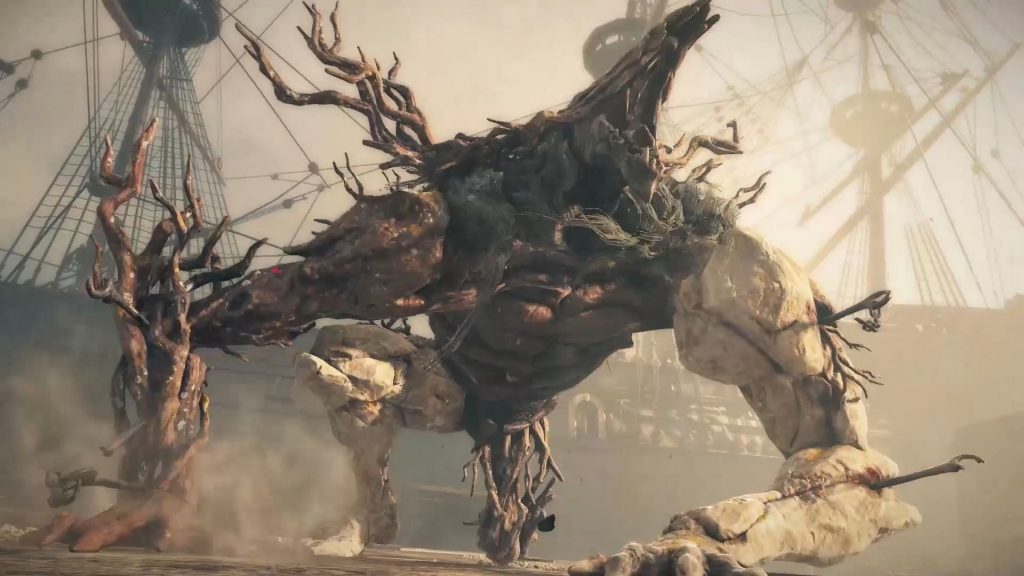 The core gameplay of Greedfall is something akin to Dragon Age, but with no real innovation or anything that stands out. The game is an ARPG at heart with plenty of fighting, questing, side quests, levelling up, and dialogue choices, etc. So let’s break down these topics. We will start with the combat as a lot of the game will consist of taking down the monsters in your preferred way.

There are three primary fighting styles- melee, ranged and magic. Each having their preferred weapon types, for example: swords and hammers = Melee, pistols and  muskets = ranged, and spells = magic. However, you are not locked into one set- you can use all three, but there is a small boost in stats tied to the class you choose at the start of the game. Each weapon will have a positive and negative effect in battle, for example- Swords are swift but do less damage. In contrast, hammers are slow but do MORE damage. As said, nothing particularly innovative.

Moving along to the combat itself, there are two modes to combat- one is live style, and the other is a tactical style. No matter which you prefer, there is no wrong way to play,  and I used both of the styles myself. I would control the action while swinging my sword or taking a shot at an enemy. Then, when it got close, with a touch of a button I’d switch to the tactical mode, dodge, and cast a spell. After which, I would start hacking at the enemy again. This felt like the right way to play, keeping an eye on the action while giving the player enough freedom to change, slow the action, and pick a tactic that will work in the current situation.

Along with your main character, there are numerous companions that the player can take with them on their journey (limited to one at a time). These companions have competent AI that will help in a fight rather than stand around like a lost child, and the companions have strengths and weaknesses but are also balanced and useable regardless of the play style.

With this being an RPG, there is levelling up to be done, picking from skills, attributes and talents. Here is where cracks show, as there is no real depth to the levelling up system. It looks like there is plenty of depth on the surface. In truth, with each direction you level up the character in the skills are relatively the same except the unlockable skills for each specialty. Attributes work as augments to the overall character abilities (increase strength, more damage, Vigour for more health, accuracy for better hit chance with guns, etc) and talents are skills the character can learn to further aid in the adventure. One example is Craftsmanship, which is for crafting weapons and armor. There is a feeling of progression. However, it just felt underwhelming and shallow.

Moving on to equipment and crafting, like with most RPGs, these two are vital for survival. Greedfall is no different in this respect. Equipment adds better protection, and some even have stat boots added. Also, with the setting, your character will look like he belongs with the Three Musketeers. I love this style of clothing, and it shows status power and job from just looking at the clothing. So style over substance is the way for my character, always.

While traversing the many areas on Teer Fradee, there are plenty of materials to be found, from both the surrounding area and from the slain monsters. Collecting materials helps with creating new items, weapons, and armor as well as augmenting them. They can be sold to make money as well, and better craftsmanship means better weapons and armor can be made. Science is needed for throwables and medicines. I spent plenty of time crafting and gathering items and I have always enjoyed these aspects in games, see something glowing got to pick it up.

Of course, crafting isn’t the only route to go down- the levelling up system does allow for some diverse characters to be made, while specializing in different areas, which allows for multiple run-throughs of the game in different ways.

The art of conversation is a big aspect here. There are a great many NPCs that will need to be talked to for information, quests, and side quests. It works like Mass Effect or Dragon Age – there is talk, then a radial menu pops up on the screen. You pick the desired reply, and if you have the skills to unlock more dialogue, then there are extra choices. Again nothing out of the ordinary, it did, however, get a little monotonous. This could be because I have seen this hundreds, if not thousands of times in prior games.

Quests and side quests are found while talking to the people in towns, settlements, and camps. These range from short, simple “kill X amount of monsters” quests, to the bigger/longer story-driven quests. One thing I did enjoy were the companion quests that can be done. These were the most enjoyable of them all, finding out more about the companions and their lives. Also, they were the most diverse of the quests.

My overall experience with Greedfall was nothing new, and other games do what Greedfall delivers better. Comparing to Spiders other games, this is an overall MASSIVE improvement on all fronts though,  and I hope they build on this to make an even better game next time around. 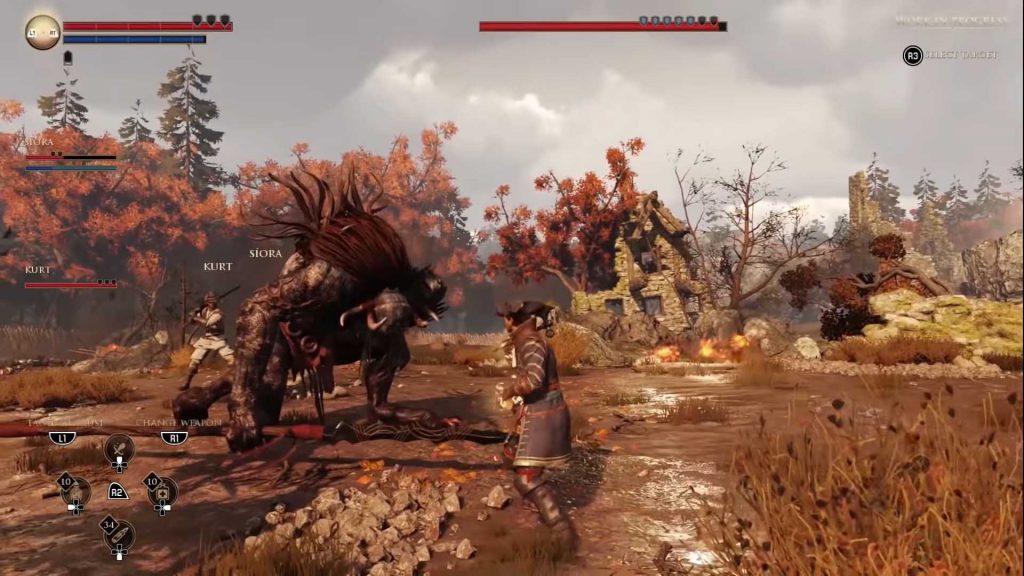 Greedfall is a decent looking game, and it is enhanced for the PS4 Pro. This definitely makes the game look much better. Monsters look great, and from there you have lush forests, populated towns, and bosses that look fantastic. There is, however, a lot of asset popping and some texture loading- it is not the worst I have seen in a game but could have been better.

The bosses are really something to behold; the first one blew me away from the size the design and how good it looked. It is a giant monster that looks like it is made from a tree (the first picture). There are little details such as where it has been pinned down, and the damage to the leg. Each boss and enemy is well thought out, and that is evident throughout the game.

There are no major bugs that I found while playing, just a few texture problems and loading errors, but on the whole the game ran well. It is a much better job than Spiders previous titles. 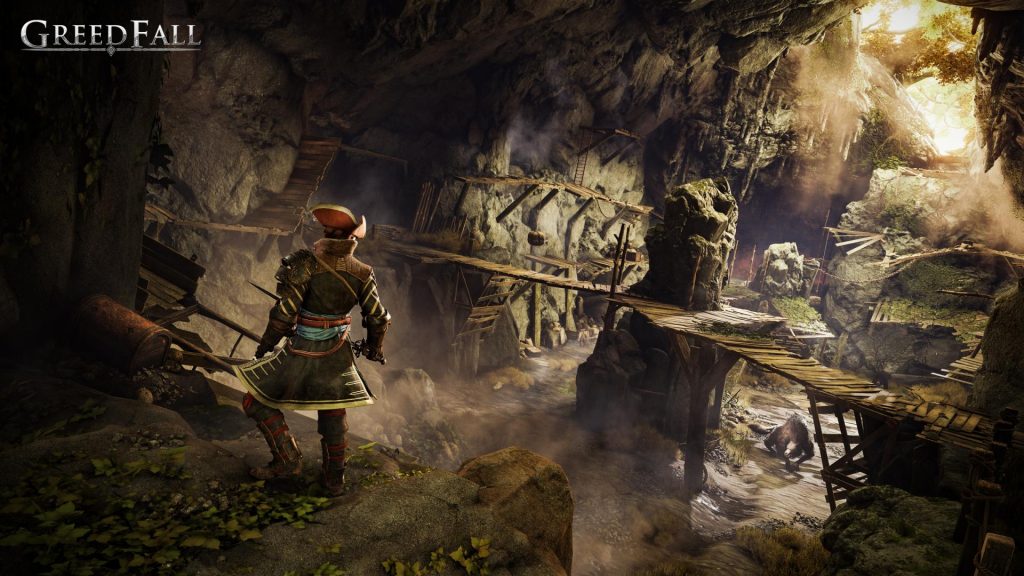 Sound design is Greedfall is personally the best part of the game’s design. There are a lot of nice things happening within the game that add layers to a somewhat run of the mill RPG.

The sound effects and ambient sounds are great at enhancing immersion, with plenty of wildlife and brids tweeting, or deer dashing by. Hearing a river off in the distance, it sounds like the world is truly alive.

The guns win for weapon sound effects, and as this is the 17th Century there are muskets, pistols etc. that use fire and gunpowder to shoot. These sound great with enough explosive force to be fairly authentic. The spells sound poor, however, and this was a let down for me. The magic should sound powerful and dangerous, but here? Not so much.

The music is outstanding, and it’s not typical adventure game style music. It is bolder and tries new things, for instance- heavy synching of the battle music. It is tremendous and oddly fitting, conjuring up the feeling of the mysterious and magical. There is one annoying and somewhat handy issue with the music- the battle music will start even if you do not see an enemy. I would have much preferred the music to when engaging in combat.

The voice acting is OK. There is nothing making the world feel MORE alive, or that each person has a more in-depth personality than the one you hear on screen as they all speak in one tone, except for main story characters.

Overall, the game does an excellent job of conveying its world, with a few hiccups, but is far better than anything Spiders has produced before. 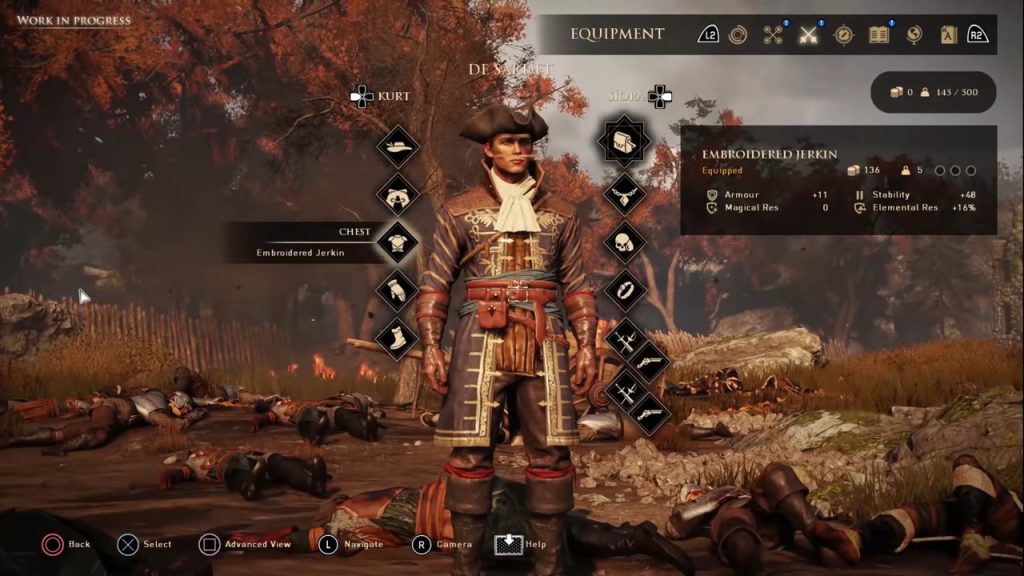 Greedfall is what a lot of people would want from a Dragon Age game without it actually being Dragon Age. It is far from perfect and has a few problems- the story meandering and shallow, the battle mechanics are average, and the voice acting is bland. This is a massive shame as Greedfall could have been a great game to fill the ARPG hole that has been left.

There are just better games out that that deliver a similar experience. Would I recommend this one? Yes, but wait for a sale. It does deliver a good experience, but it’s nothing outstanding.

If you enjoyed this review check out our review of The Alliance Alive for another RPG experience HERE!