Golazo! is not your typical football game, it keeps the core foundation of any football game; while adding a few more quirky aspects that make this title stand out from the crowd.
Upon starting up the title, you will be greeted with colourful and a quite cartoon-like graphical style. Which is a nice change of pace from more realistic sports games.
When I first got given this review code from lovely guys at Klabater. It bought back fond memories of a few football games I use to own on the GameCube in the past. Such as Sega soccer slam and Mario strikers both had really unique styles gameplay… but both were quite tough to play. I was concerned at first.. as I’ve not played a football title in a long while, I wasn’t sure If I was going to enjoy GOLAZO!

However, there is quite a bit of content on offer here, and it is more of an arcade-like experience than your traditional football title. As certain rules don’t apply here, power-ups can be activated during matches which spice up the gameplay making for a faster arcade-like feel. 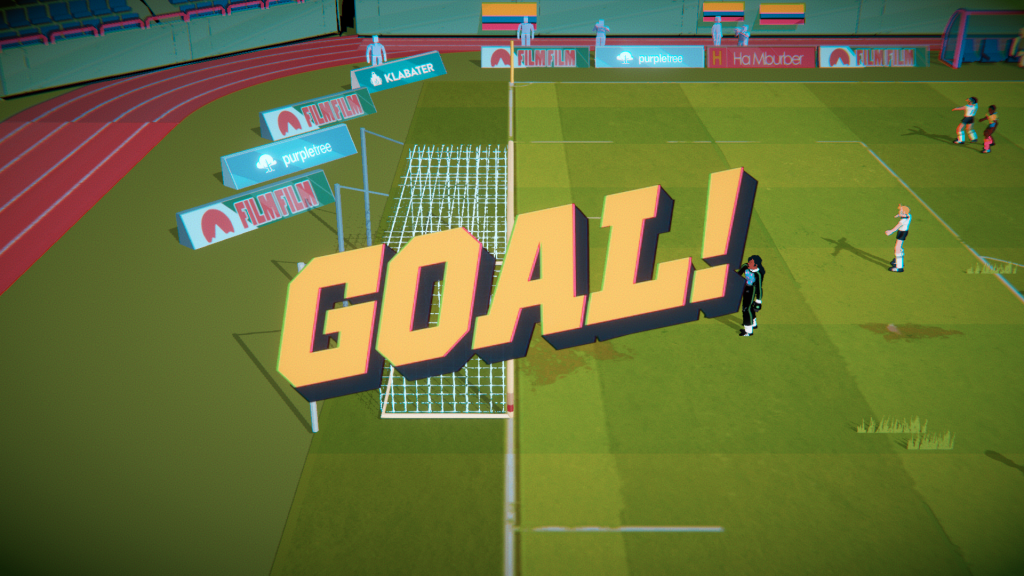 In the quick match option, you can either select HOME or AWAY, and one of the 52 national teams as in Europe, Africa, America etc. After picking one of these countries you to choose from one many different strips. (More strips can be unlocked in the locker) you’ll then repeat the process for your opponents. Then selecting a team to play as, along with the opposing team being a friend or CPU, lastly selecting one of the four formations before beginning a match. After which the match will start.

The game is also fully voice acted too, which is a nice addition but can become repetitive after a while. Each team you pick has there own mangers which will appear before a match. Their appearances are cartoon caricatures that resemble their real-life counterparts quite well. Matches have a variety of different weather conditions that changing up each match. Another thing to beware of is there are no rules here… so certain aspects of football like offside, fouls don’t exist in GOLAZO!

Thankfully there is a tutorial at the beginning of the game to get you up and running on how everything works. You can move around with the left analogue stick, run by pressing and holding R. You can jump with L preventing people from tackling you. Tackle with the A, steal with B and shoot with Y, holding Y will perform a powerful shot.
Control can change depending on if you are attacking or defending.

You can even perform an evasive spin move with a combination of R, L to avoid having the ball taken from you. During the times where you are about to shoot, you can press and hold Y to use a power shot, a power shots hit the ball faster than a regular shot. Randomly power-ups can be activated during the match. These can give you an extra power shot or an increased speed boost.

The international cup allows you to take a selected team through a series of matches to be crowd number one.

World league sees you competing across the world to be rank as number 1.

Both these modes will definitely delight football veterans as they will probably provide them with countless hours of gameplay. However, I did become bored with both of these modes because of the annoying AI. Which sometime were overly aggressive or completely useless. I am not the target audience here, so people who do enjoy the football experiences will enjoy these modes far more extensively than I did. I will say I really enjoyed the quick play option and local multiplayer.

Locker is an excellent addition in GOLAZO! As it is where you can spend your hard-earned cash – Which you will be rewarded with after completing matches in the numerous modes. There is different gear you can buy for the team to use, such as Accessories – glasses, masks, headbands, to name a few. You can also buy jerseys for your teams as well as different balls with there own unique patterns, you can also buy sneakers too. Giving you lots of option customise your team.

My favourite purchases have to be the cheers-emotes that you can buy and select. These give you access to multiple emotes that can be activated upon scoring or winning games. This alone allows little extra incentive to keep playing and unlock all additional cosmetic items which I liked a lot.

Like any football game multiplayer is present here too in the form of local play, eg. Couch play. Probably one of the best ways to play any football game… I could imagine. Having few mates around for a bit of a laugh with this one. Its shame online wasn’t present here, but I feel in hindsight that local play was a better option.

A really cool thing here is you can play up to 4 players either co-operative in the same team or against each other. This makes my issues with AI redundant as you then have actual real people playing with you. Making for a more engaging match with friends. Matches can be a lot of fun plus any cash rewards you unlock can be spent in locker unlocking more goodies.

I do have some issues with GOLAZO!

The AI controlled players will, at times, run into the wrong goal scoring for the opposing team. The AI could do with being little more intelligent than they it actually is. It did frustrate me when things like this happened. When the ball is being passed down the field, I would appreciate the option to swap to other players so I can tackle or get into a better position to nab the ball. However, this doesn’t happen, and instead, you are automatically swapped to teammates at a slowly, meaning sometimes you don’t feel as you have any control over what’s happening.

With the camera fixed to a side view its hard to judge distances and a couple of times I kicked a ball only for it to completely miss the net which was annoying as couldn’t judge if I was at the right angle to make the shot. 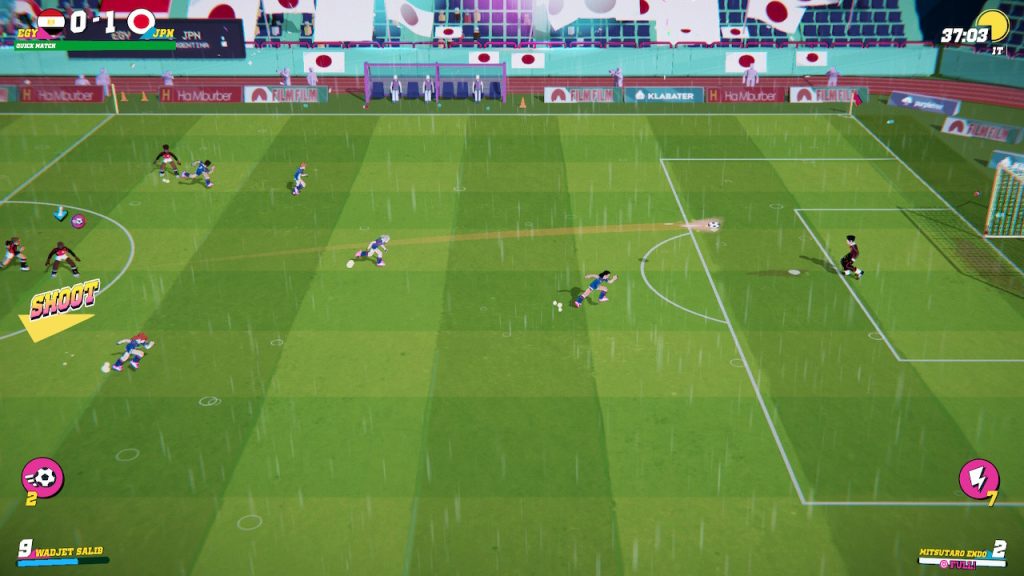 The graphics in GOLAZO! Are quite colourful, and I think it makes the game a lot more appealing to look at and play. I really like the caricatures of the mangers, I wished they had played a more significant role in the game. There is also the ability to change to a VHS filter to give you more of a retro feel which can be turned on and off in the options menu and look pretty cool. 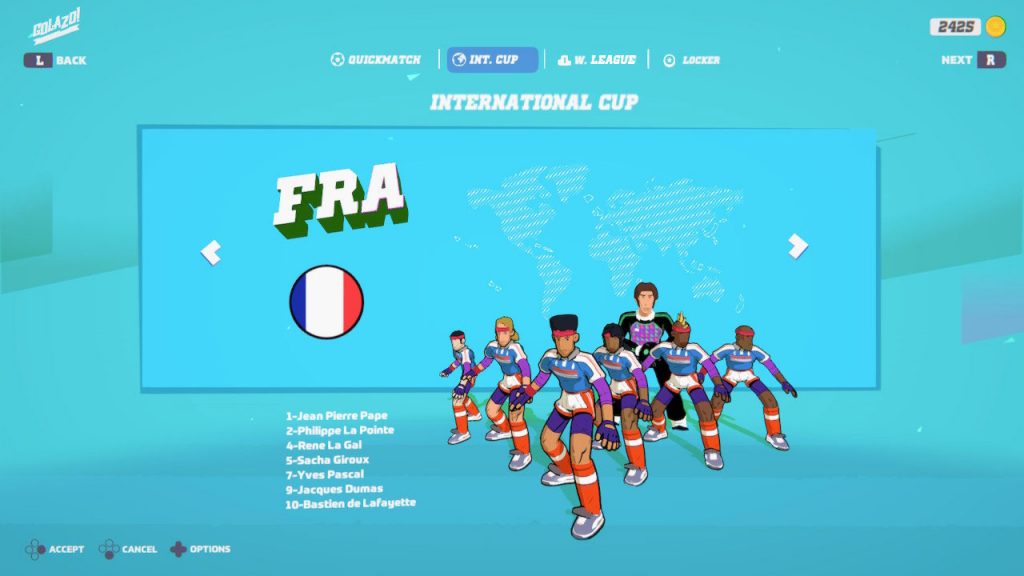 Graphics side of things look pretty decent, I also liked the loading screen stills and the catchy music on the title screen. Plus some of the tunes during play pretty good too.

My only gripe is the music does cut-in and out of different tunes in the main menu’s its nothing that harms the overall presentation all that much, but it is noticeable. 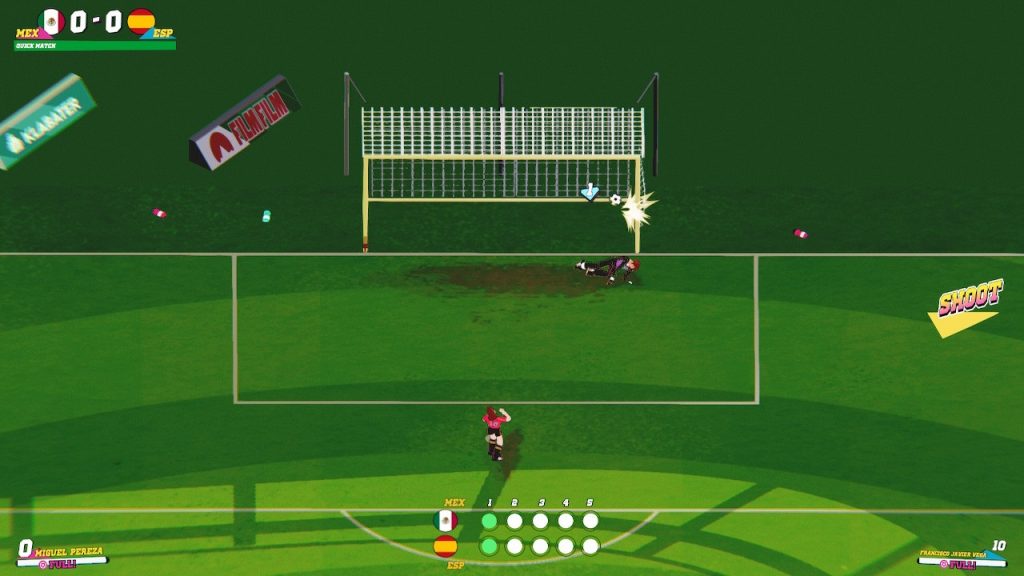 I like GOLAZO! It’s a pretty decent football game on the Nintendo Switch that I think a lot of people who enjoy the sport will appreciate. Local multiplayer is definitely the best mode to play with friends, there’s a lot of unlockable goodies to spend your in-game cash on.

The quirky art style, catchy tunes and arcade-like gameplay should delight most fans of the sport. It does have some issues but it is still a pretty decent alternative footy game to spend the weekend with!