The story in Gensou SkyDrift is about a strange world called Gensokyo which is located in japan.. One fateful day Reimu, Marisa while walking around town feel their spirit energy weakening… when all of a sudden they see a stranger speeding past them, down the track. Without hesitation both Reimu and Marisa decide to pursue this individual… By combining their powers together to chase after this fleeing stranger. 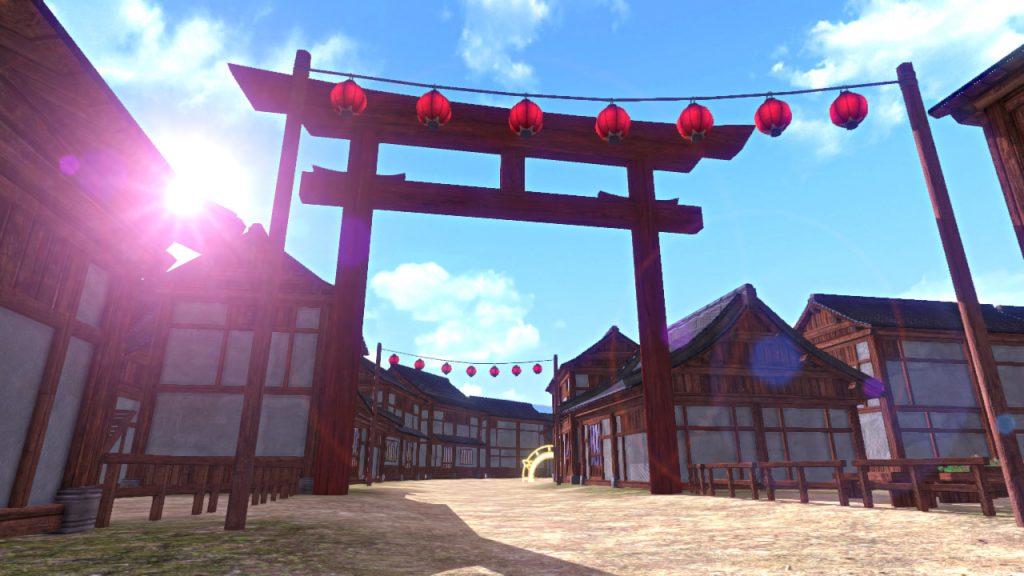 Gensou Skydrift comes with a few different modes… Lets take a brief look at each one now.

The campaign mode follows the story which I mentioned above… which I found pretty dull to follow throughout. Each story segment is shown before a race and if you successfully complete a race by coming in first position. Story is told through still character images and dialogue boxes and was mostly forgettable. However thankfully the actual gameplay is a lot more engaging, enjoyable and there are a range of different tracks available to test your driving skills to limit.

The craziest, unique feature of the whole game is how the characters race.

Instead of driving a kart or a vehicle you actually pick one of the 20 available characters, then pick a second Character that you will use as your vehicle… I kid you not. What this means is your practical surfing on the other girl as you fly, hover around each course.  It’s completely crazy and quite hilarious to see in action to be honest. However it works surprising well, one of the really cool features is you can swap – double dash style with the other character, swap positions during racers.

This is actually really useful as each of your two characters can hold one spell card each. And this allows you to swap them in, out to use their cards when you need them.

Of course each character has there own statistics such as speed, drift, spell damage. Some racer are better at drifting while other have better control while in the air thankfully there enough characters, combinations find someone to suit your play style.  As you fly around each course you will notice gold rings which will give you short speed boast and slowly charge-up your spell bars located bottom right-hand corner. Once you active spell button cards cycle before giving you random card out of a deck that you can use against your opponents.  Some of these spells will attack enemies infront of you while others may give you a speed burst or a defensive ability.

My only con with these card items is there’s no way to know what each one does, there isn’t no index or in-game manual that tells you what each card is capable of.

Gensou Skydrift has 16 courses on offer which you can play in a single, multiplayer, online, free run.

Once you have completed first 7 courses in the campaign you’ll be surprised to see a 8th track appear, completing this will end your first campaign…  Then you’ll be treated to a post-game campaign with extra tracks that are reconfigured and some completely new ones to play which adds to the replayability.  And the Extra campaign was a nice surprise.

Single race – see’s you picking two characters and selecting several options such as CPU difficulty, No of laps, Rules, tracks.

Multiplayer mode – can be played with up to 4 players locally.  Its nice addition to have a local play option in any racer and am happy to see it here to.

Online mode – supports ranked matches, free match,  characters selection. Note; ive not been able to find single match though… Which is a shame as I could imagine this would be a pretty fun online experience with real people.  However at the time of writing there’s no one here to play with.

Free run allows you pick any characters and course and play without other opponents.  Its great mode to familiarise yourself with new tracks, you also race ghosts, save replays, watch them in the gallery which is unlocked after completing the first campaign.

This mode allows you to view any saved replays, view 3D models of all girls in flying, standing poses and listen to music from a game. 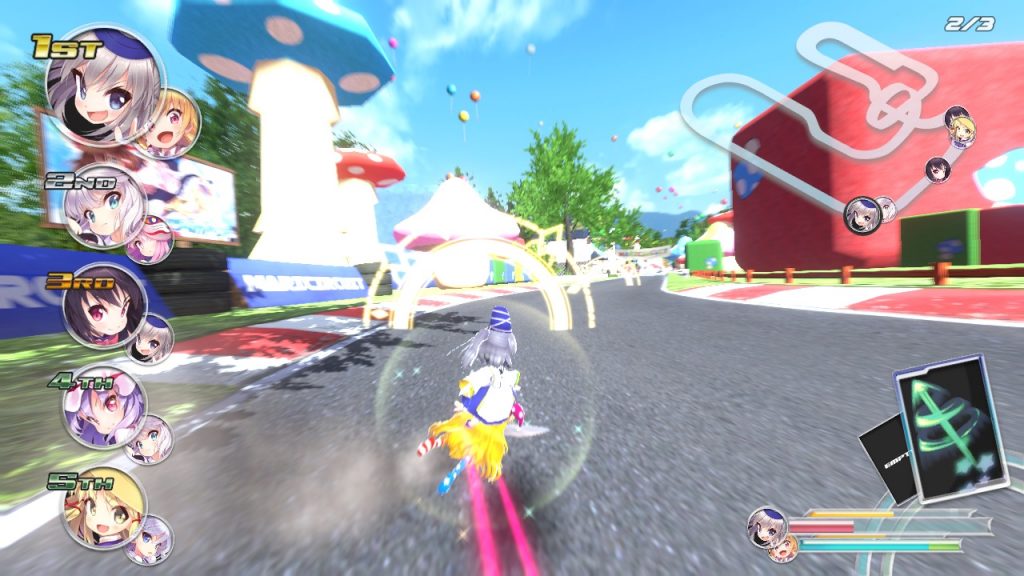 Graphics in Gensou Skydrift are ok but they’re nothing outstanding. The character art on the character select screen look really sharp but the actual character models in-game just don’t look all that great.

My issues with Gensou Skydrift has to be a lack of any online players… realizing this game came out in 2019 I understand that a lot players have drifted away from the title which is a shame.

But my biggest gripe i found was some later courses are absolutely ridiculous to race on… when you see CPU struggling to make most of the turns you know there’s something wrong… The two tracks that come to mind are: Voile Library and Old Capital. The Twists, near impossible turns makes these two tracks feel awkward, frustrating to play. 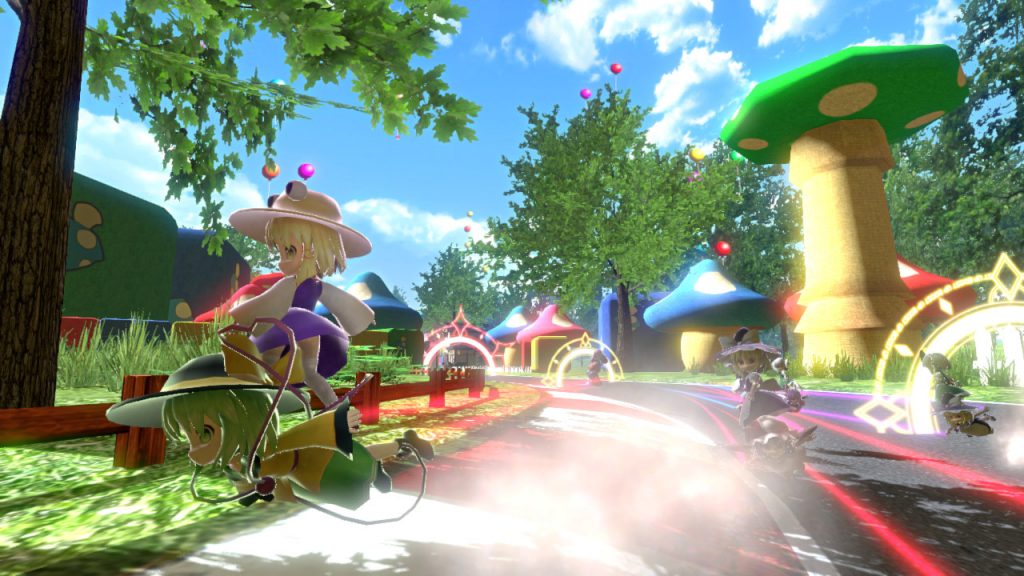 Tracks have some decent visual flair to them specially Hakugyokuro track which see’s you racing through the clouds only for them to part, open up to a massive blossom tree. The music however is awesome and I love all the soundtracks, each one fits the respective track well and it’s one of my favourite things about Gensou Skydrift. 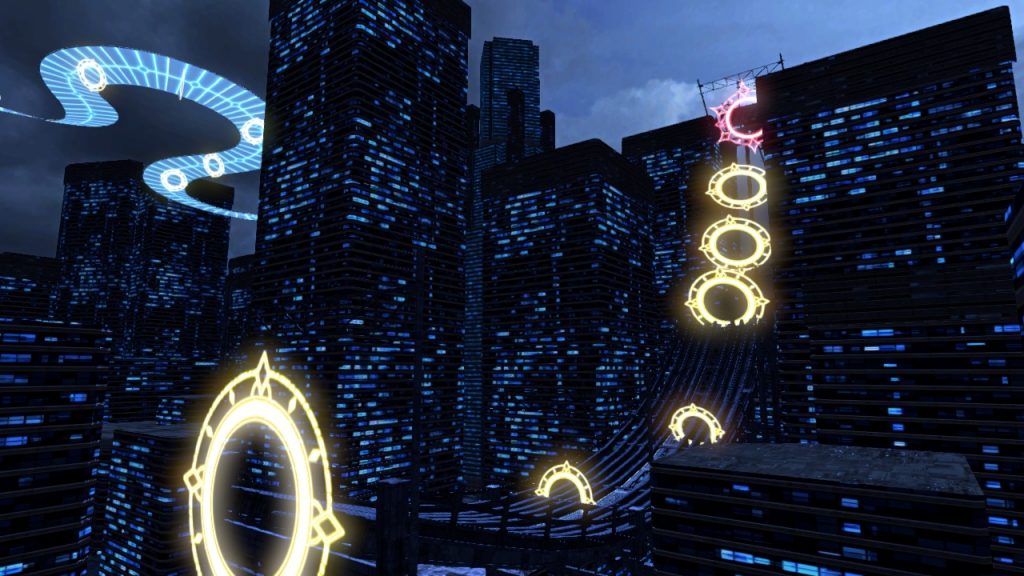 Ive really enjoyed my time with Gensou Skydrift. The campaign mode, post-game content, was a nice surprise and racing was fast, fun.  Story wasn’t really engaging though, I mostly skipped the prolong dialogue. The music really hit the spot for me though with a lot of upbeat tunes. Online is completely dead, which is a huge shame. But with the 16 tracks, multiple game modes, the 20 characters on offer add some longevity…  And the weird vehicle mechanic makes this a title you should at least experience while have the chance.

if you enojed this check out our review of Super Street Racer HERE!