Now and then you find something unexpected that you maybe didn’t have on your radar, but for some reason you felt like you should give it at least a try? Discovering Fox n Forests was one of these moments. It will have undoubtedly gone unnoticed by the vast majority of Nintendo Switch owners. I, like many, was one of the majority until it caught my eye while browsing the store. Something that drew me in (I think it was maybe the cool crossbow-wielding Fox, but I could be wrong). I sat on it for a few days then thought “let’s just get it.” I have to say it was one of the few random buys I do not regret.

The story is a simple one. You play as Rick, our fox hero.. You’ll also be joined by his ever helpful ‘friend’ Patty, the partridge as you both team up to save the seasons. The old and wise season tree has had part of its bark stolen and has entrusted Rick to get it back. After a brief explanation of the situation, the season tree grants Rick the power to control the seasons and save them.

All be it a simple story; lets not forget about the gamplay itself. Fox n’ Forests is a 16-bit era inspired action platformer game, and the story is the overture that gives a purpose to the actions and nothing else. 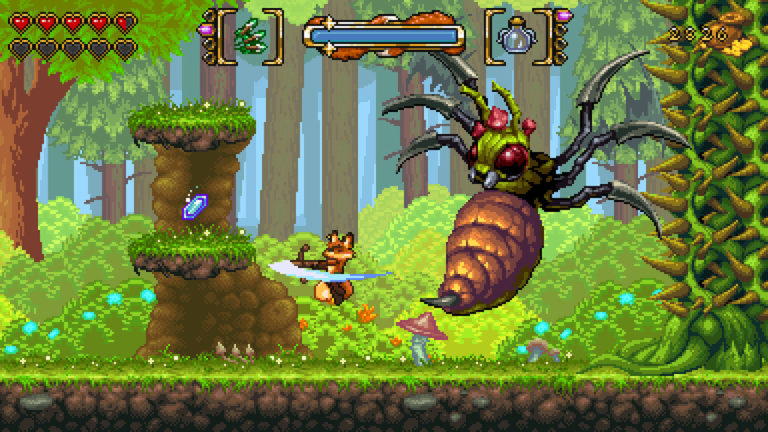 If you have played any platformer, you will have a good idea of what to expect. Double jump, attacks, air attacks, shooting attacks and magic attacks to name a few. Collecting enough money will allow Rick to purchase different attacks or arrow types and magic. There is however a couple of differences;

The main difference being, the seasonal change mechanic. It’s good to mix up the platformer formula now and again. Each season (level) will give Rick two seasons to choose from. Each season has it’s own distinct look, as you would expect. The seasons can dramatically alter the landscape. These seasonal changes mix up the platforming sections. Traversing a body of water may be impossible in the summer, but in winter you can freeze it to pass over it. Summer sections will have lush trees with platforms hidden amongst the leafs, but autumn will reveal these areas where you can maybe nab some hidden goodies.

The combat is a mix of melee, shooting and magic. Shooting with crossbow may seem pretty straightforward, but there’s more to it than just firing bolts. As you progress you’ll be able to gain a variety of different projectiles to fire, which will give you more flexibility in encounters. Melee action lets you hack-n-slash along the ground and in the air. These attacks are generally less effective than using the crossbow, but they don’t consume magic. With magic, we get to use really powerful attacks that can take out a lot of foes fast. The only downside to using these attacks is their mana consumption, so be careful!

Fox n Forests does not offer much in replayability. There is no incentive to complete the game at 100%. Some stages can be unlocked throughout each season, but that is about it.

Fox n Forests is a 16-bit masterpiece when it comes to looks. The seasonal styles are stunning, seamlessly changing from one season to the next with the world around Rick changing completely. The animations are slick, which caters well to the pace of the action, especially when using magic attacks.

Performance wise, the game is a smooth experience. There was no noticeable slowdown or any other performance issues to note. It performs well in both docked and handheld. I preferred to play handheld for this one.

There are a few bugs with control issues. At times there seems to be some input lag, that can lead to miss timing an attack or jump or even annoyingly getting hit unnecessarily. These again are not game breaking but more of an annoyance. Hopefully this kind of thing can be patched easily. 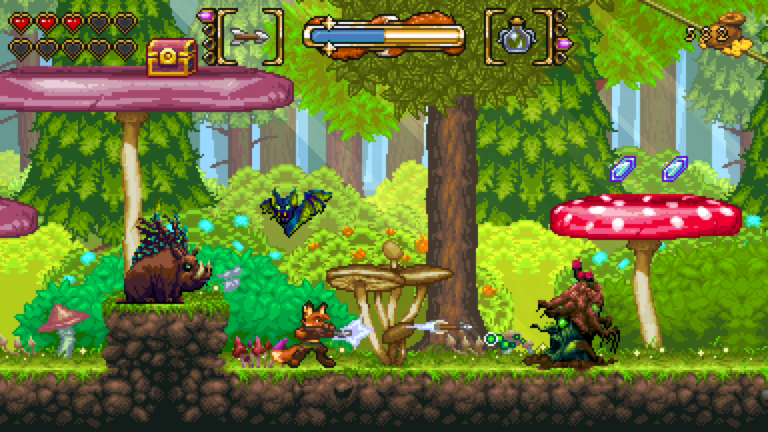 The 16-bit soundtrack and effects in Fox n Forests are both really well done. The soundtrack fits perfectly with the seasonal changes in the game. The boss fights in particular have great music to them.

The sound effects feel like they have been lifted out of an early 90’s platform game and dropped right into this one. From the different sounding crossbow bolts to the ping of the bayonet melee attack each one has its own distinctive feel.

Fox n Forests, is somewhat of a hidden gem on the Nintendo Switch (and other platforms). There was a lot of attention about it on release, and we can’t help but find it baffling. If you get the chance, you should definitely give it a try; I am glad I did! It is not perfect and has some flaws, nothing that will take away from the fun.