Forager is a charming open-world adventure, developed by the one man team at HopFrog. The goal is to gather up resources as they spawn around the map, allowing you to craft new items and buildings while upgrading your existing equipment. You’ll then need to earn money to buy new lands and explore the rest of the world. 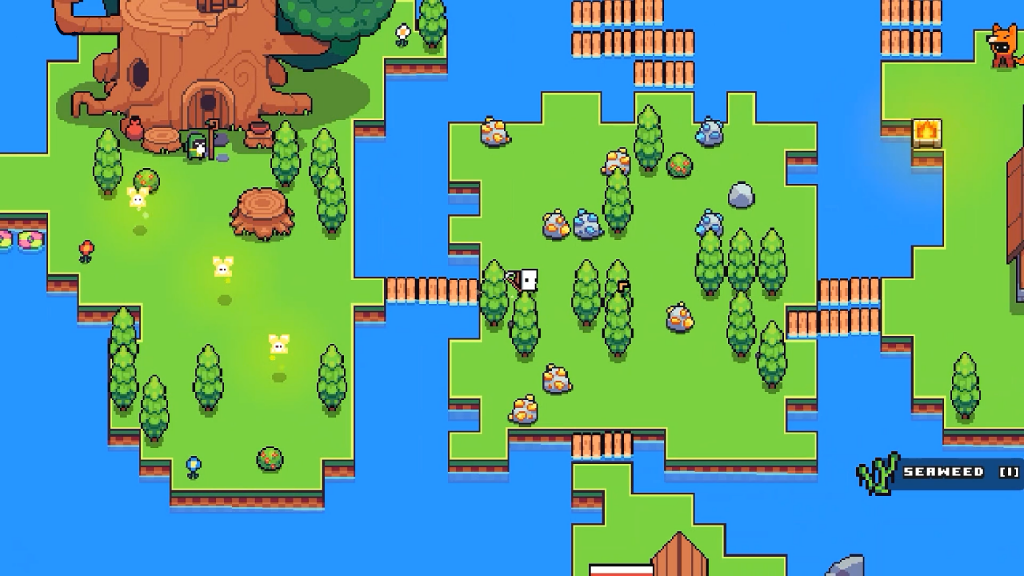 Admittedly, after about 10 minutes of mining rocks and chopping down trees, I got the dreaded fear that I get with all these resource collecting games; the grind! And boy what a grind it is! But I say this in the most enjoyable way possible. It’s such a simple formula, and you think before stopping, I’ll just gather some resources for the next upgrade or maybe I’ll stop after I buy the next piece of land and see what’s on it. I just couldn’t put it down.

One thing that makes it so easy to jump into is the basic gameplay. You gather resources with your pick-axe, mining ore or cutting trees (no need for an axe!). You’ll also be able to kill enemies or animals with your pick-axe, until you can craft yourself a sword or bow. Again, the combat aspect of the game is fairly simple, with a few added things like being able to dodge roll.

As you cut, mine, battle your way through the game you’ll earn EXP and gain levels. Being able to level up and pick skills is a great way to tailor how you go about your business within the game. Eventually you can unlock all skills but at the beginning you’ll need to decide how you want to build your fortune initially. The four main skill paths are industry, economy, foraging, and magic. Each of these paths will unlock various buildings and give you certain traits in that area. I mainly focused on levelling industry and economy to get gold as fast as I could, but realised later on that I needed magic items to upgrade some of my gear. So I would suggest a more balanced approach.

The key to really opening up the game is buying land. At first the land is pretty cheap, so your world expands at a decent rate. Sadly, that doesn’t last long, and is what I put most of my time into grinding gold for. The reason – these plots of land don’t just give you more space to build or retrieve resources, but have some interesting things on them that expand the game from just being a resource gatherer. These vary from small Zelda like dungeons, to puzzle rooms, NPC quests, and less obvious mysteries on the some lands. The dungeons is where you’ll fight your way through it solving little puzzles and eventually finding the boss key to take out, well, the boss of the dungeon and earn yourself some gear. My only wish for these, that they could have been longer or a bit more challenging. The puzzle rooms, or dimensions, have environmental puzzles to solve. Some of these are tricky and left me stumped for a while, which made them more rewarding when solved. The NPC quests were fairly standard, go fetch X amount or kill X amount, or fetch this rare item. Lastly, some plots had cryptic puzzles to solve, which like the dimensions, could also be tricky.

Shamefully (but not really) I put 15 hours hard graft into the game buying all the islands, solving every puzzle and defeating all the dungeons. So you’ll get a decent amount of time with this game if you want to unlock all the lands. There’s also plans for new updates, some of which are being teased – Farm Life and Combat Update. 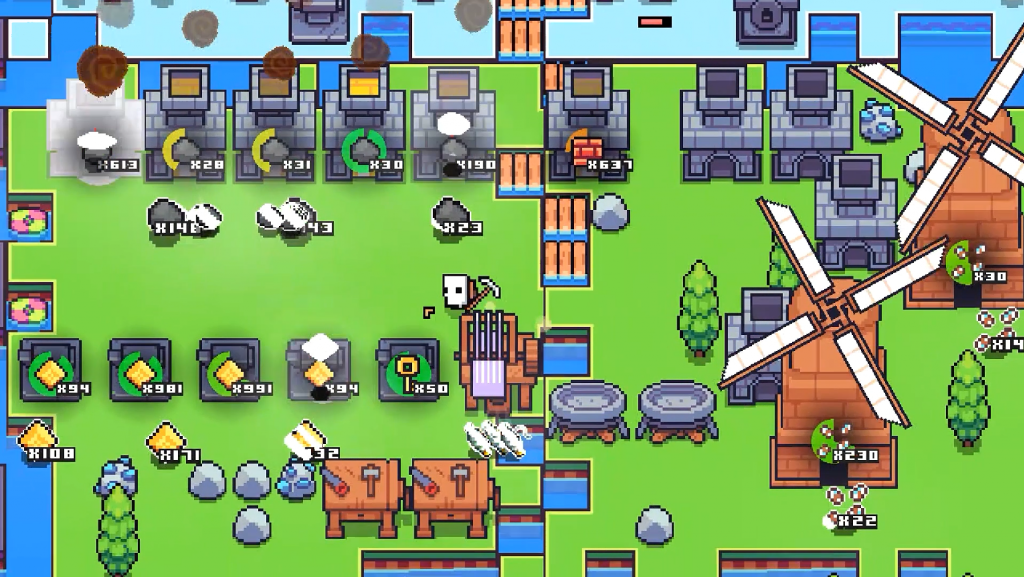 As mentioned before, this is a charming adventure game, not just through it’s gameplay and character models but the way everything looks. Everything is well presented and easy to follow on screen as well. I had some frame drops in some dungeon areas, most notably in the crystal cave, where near the end of the dungeon it must have dropped to about 5 FPS! Apart from that it played well. 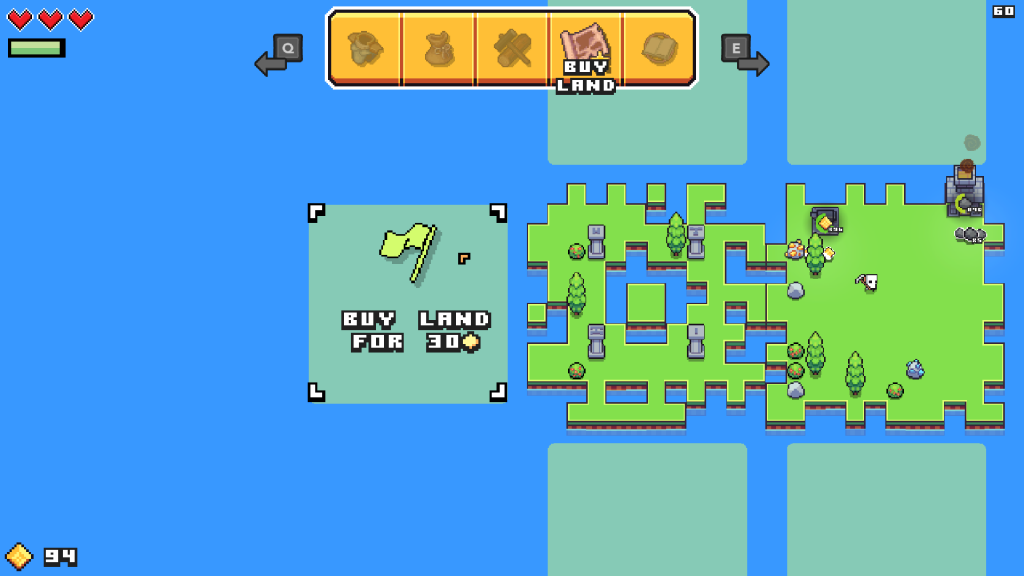 Sound design wasn’t anything special and pretty minimal, but did enough within the style of game. After playing it as long as I did, I had to turn it down a bit as I collecting a crazy amount of resources and all I could hear in my dreams was popping and jingling noises! 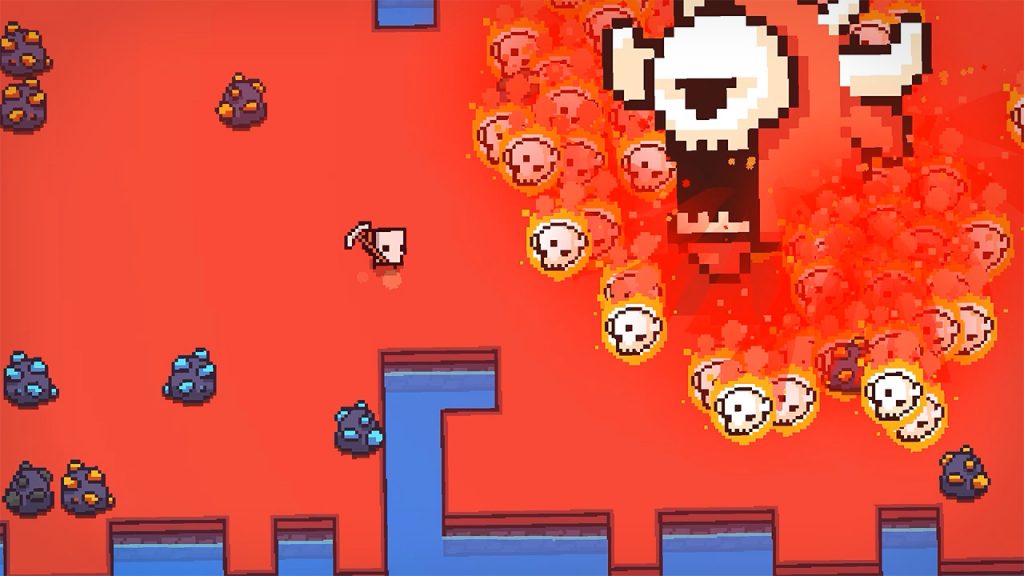 I really enjoyed my time in Forager, and it was clear this was a total passion project from the developer (check out the comics in the extras section of the game). Although I enjoyed the grind, some people may not. I would’ve like more dungeons to play through, or even bigger more difficult ones, as the experiences in the game were short lived. That said, if you stick with it long enough and buy all the islands you will definitely get your moneys worth. There’s a solid foundation here, if not a bit grindy, but hopefully with future add-ons – as the roadmap suggests – it will flesh out the gameplay a bit more.