Fate Hunters is a shadowy fun and challenging strategy card game developed and published by Tower Games. You must rise through numerous levels in this strange but alluring world, defeating numerous relentless enemies whilst building your deck, escaping the tower and securing your hard earned treasure. Choose your path, your character and your deck, play it safe or open the doors to the rooms where only chilling creatures lay waiting for you. Will you defeat them? or just be another casualty to fate? 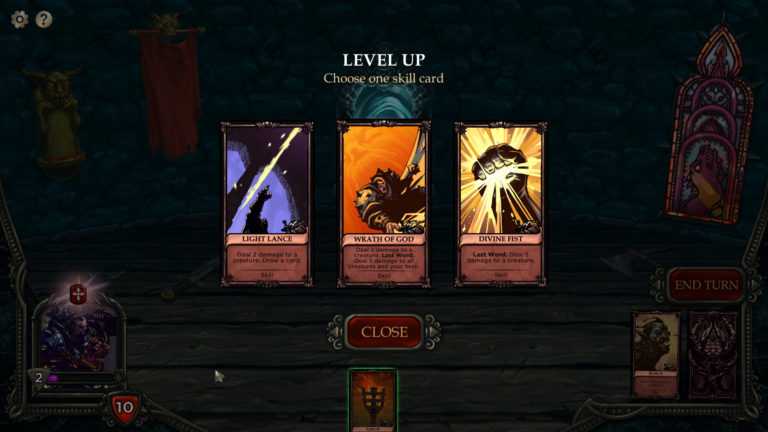 Having never played a strategy card game like Fate Hunters before I must say I was quite trepidatious when first going into it, however its safe to say that I was pleasantly surprised at how much I did enjoy it. The opening screen and accompanying music signify a fantasy world. You are presented with a character selection via a book, whereby turning the pages lets you see the different options, every character has different abilities and attributes, each also have their own picture and name. The only character available at the start is “Inquisitor” – the others are unlocked either after defeating certain foes or purchasing with coins. Next you are shown a screen whereby your skills and supply are shown via card form along with a brief description of their abilities. Skills are basically your weapons e.g. punch, critical hit powers, and your supply is your healing and tactic tools.

Jumping right into the game you are shown a brief tutorial on how it plays out, this I feel could have been a bit more detailed for people like me who aren’t used to playing these sorts of games, however as you progress through it you pick it up as you go along, granted it took me a few attempts to figure out the basics and how to use certain cards and tactics.

You are presented with five cards at first along with two monsters, for me I encountered the Goblin and the Dire Wolf. You can choose periodically what rooms to venture into, easy, normal or hard rooms, the monsters and loot inside vary depending on what one you decide on. The layout of these fights are simple, your enemies are in the middle presented in card form with their attack on the bottom left of their card, and their health on the bottom right, the same goes for your character (that card is on the bottom left of the screen). Once you play a card it goes into the discard pile, next to it is the draw pile, above this is an option to end your turn if you don’t have any cards left to play. After your turn the enemy will strike, how much damage they inflict depends on their level, a low level character will strike between 1-4, however a higher character will inflict 4+. This must be kept in mind when deciding which cards to attack with as your health points only start at eighteen, and once you reach zero you lose everything and have to start all over again. Defeating foes and progressing through levels allows you to add more cards to your deck (Trophies) levelling up adds abilities to you characters cards to make them more powerful, this is important in more difficult battles, especially boss fights.

Reading and understanding your cards is an essential element in the game, there is no point in using a critical attack on an “Ooze” whose damage is only two when you have an “Orc Warrior” in the same room whose damage is eight. This is where playing tactically and using combos becomes a sure fire way to advance to the boss fights, upgrade your deck, earn more gold and survive longer. 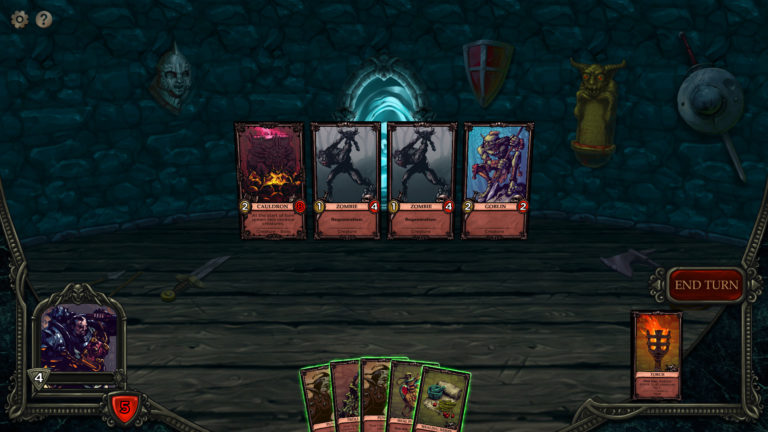 Visually, Fate Hunters is what you would expect from a strategy card game’s graphics. The overall layout is simple, clean and once you get the hang of it, easy to understand. Your character’s and the enemy’s cards are visually appealing, especially when you encounter the more various foes during the course of the game, these characters are colourful and have their own neat little variants added to them, while the backgrounds of each fight are nice in themselves.

I didn’t encounter any bugs while playing the game, it was fast, smooth and continuous. 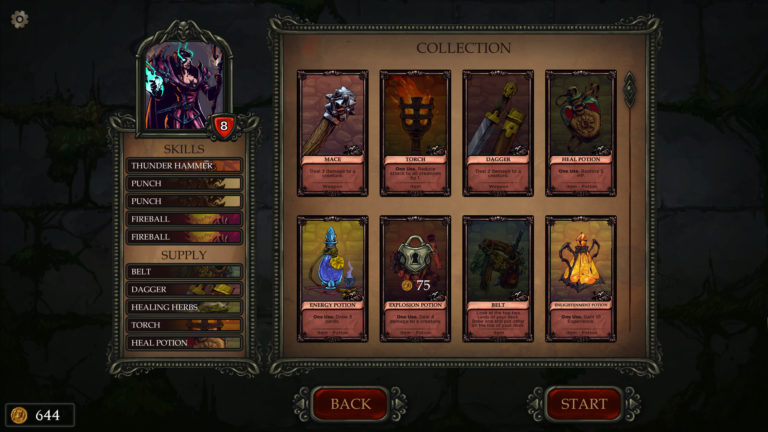 I liked the music in the game, it gave it a good mysterious, medieval, eerie feel to it. The opening sound really does a good job in giving the game that fantasy feel – this continues while you play. I can also appreciate the little sound effects added to the game which make it all the more enjoyable to play through. The sound of a sword slashing as you attack an enemy, or flames burning when you use the torch, even when you level up, that little celebratory noise is very satisfying. I also enjoyed the dramatic change in music when you reach a boss fight – the faster and louder drums combined with the powerful violin and other melodic and vocal elements really make the boss fights rewarding.

In conclusion, Fate Hunters is an enjoyable, all be it challenging strategy card game. It was a good change of pace for myself to play a game like this as mentioned previously this is the first strategy card game I’ve played. For a newcomer however, I would have liked a bit more of a guide and/or hints displayed throughout the game to advise me on what would be the best play or how to tactically beat that level. Nonetheless the game’s layout is clean, the graphics are great, the mechanics are smooth and the sound is top notch.

The Dungeon of Naheulbeuk: The Amulet of Chaos Chicken Edition