EarthNight’s story is a simple one. Dragons have taken over the earth and humans have all but given up hope and the will to fight back. However, two individuals who won’t bow down, get together and decide to take the fight to them!

A middle aged photographer called Stanley and a young school girl named Sydney will run, jump and use a variety of power-ups to run across a dragon’s back right up to their head. Before using their unique abilities to put a stop to the invasion by attacking the dragon’s weak-spot and collecting their reward once it has been defeated. 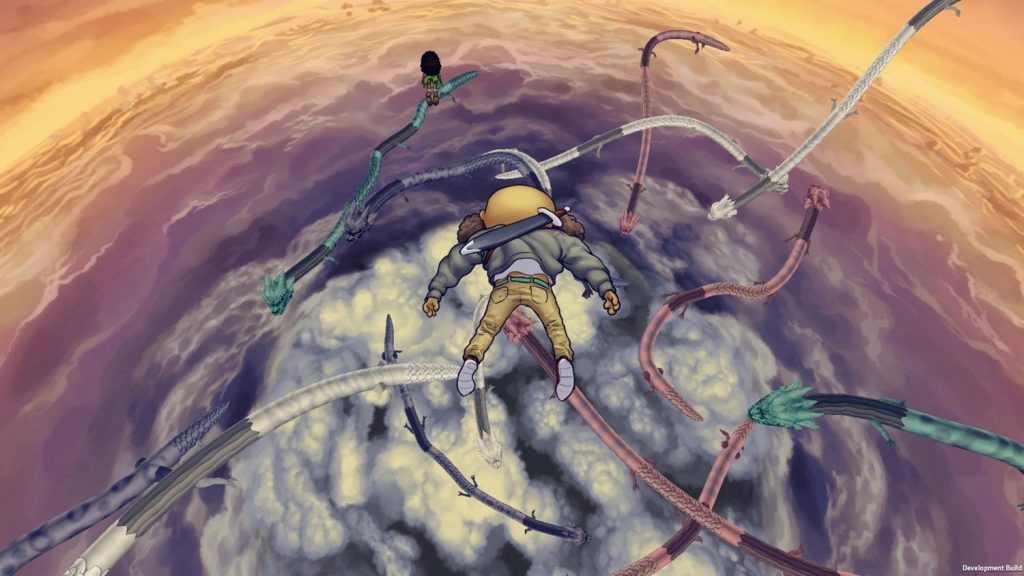 Your base of operations is a large rocket-ship floating above the atmosphere.  This is where you’ll be able to pick your choice of the two characters as well as take look in the shop off to the right. You can also check out the options menu that allows you to tinker with your HUD display.

Each of the two characters have their own unique ability. Sydney can jump once then immediately use one of 3 secondary actions; dashing downward, double jumping or dashing forward.  Sydney can also use her Dragon Spirit to stab at the dragon’s heads once she reaches it. Stanley uses his sword to attack with. He can use light and dark sword power-ups (once unlocked) to kill different types of enemies allowing him to create combos and earn more points in long run.

Stanley is definitely for more advance players, as he doesn’t have as many abilities as Sydney does.

Whomever you decide to pick, you will begin your run by skydiving from your ship on to your first dragon. This is where the fun begins as you will jump and dash across a dragon’s back all the while avoiding enemies and collecting a whole load of items and power-ups as you go. Bouncing on enemies heads will allow you to create a combo which will be rewarded with extra water –  the currency in the game as well earning you BIG points. If you take too much damage during a run, it will end and your current horde of items and junk will be tallied up to determine your score; water will be given depending on what you earn.

This is where the shop comes into play. As mentioned before, water is the main currency in EarthNight. The strange shop clerk will allow you to purchase over 25 different power-ups once certain items have been collected; given that you have enough water to purchase them. These power-ups can assist you during runs making it easier to defeat your enemies.

There also lots of dragon junk to accumulate when playing and collecting enough of the same pieces of junk  will allow you to unlock that item automatically which will appear in your ship hub.

Trophies from dragons you’ve killed and eggs you’ve found can also be viewed in here too along with all your collected junk.

There are 5 layers of the Earth’s atmosphere to skydive into, with each layer having their own unique set of dragons to encounter and defeat. Some of these dragons will have multiple routes for you to choose, some allowing you to jump to higher areas by bouncing off enemy’s heads Mario style. Once you’ve reached a dragon’s head, there’s a health bar that appears at the top righthand side of the screen. A timer will tick down in this instance and you’ll have to defeat the dragon within the timer otherwise you’ll be knocked off and dragon will regain its health. Each dragon has their own defences that the players need to deal with during the climb to their noggin; it basically has its own eco-system living there and you’ll need to use your skills and power-ups if you’re going to survive it.  Once you’ve reached a dragon’s head you’ll also have to take into account what type of dragon you’re dealing with. For example, the stone dragons require rapid tapping of the attack button to break them while a standard dragon can wobble, making you unbalanced and stopping you from attacking them.  Each one is as distinct as the last and some can be quite challenging to bring down.

I really like the quick and to the point gameplay in EarthNight. I totally get the Sonic vibe once you begin your run on the dragon’s back, especially when going through loop-de-loops. It’s fast, exhilarating and enjoyable… However, it is no cake walk and I did find EarthNight to be quite challenging. Power-ups and collecting 3 dragon eggs during runs can make killing dragons a little easier which alleviates some of the frustration and pressure. 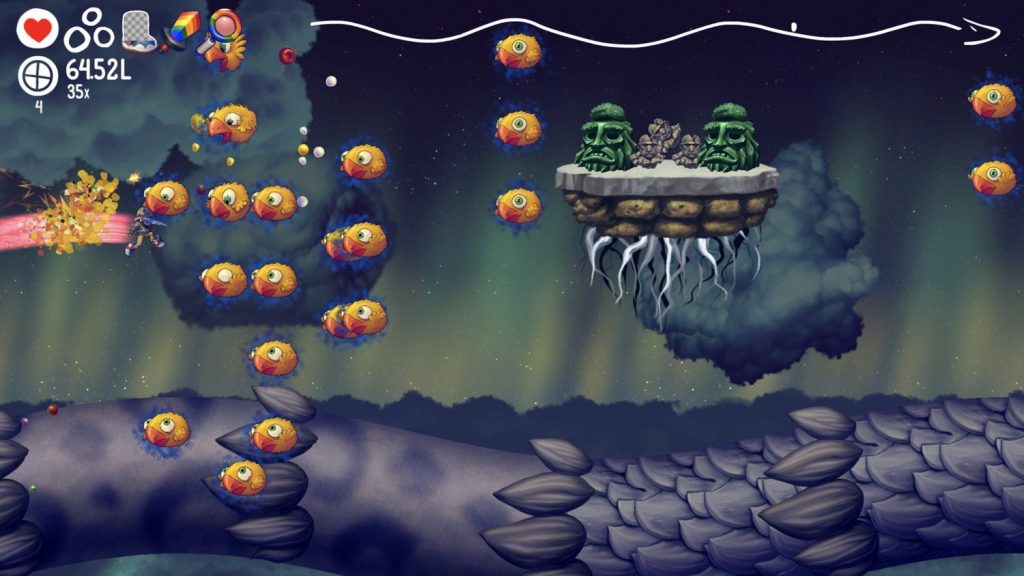 The graphics in Earth Night are rather lovely with each enemy, main characters having a real crisp look to them. The beautiful visuals come at a cost as slow-down does rear its ugly head from time to time; when things get hectic on screen, which is a shame really. 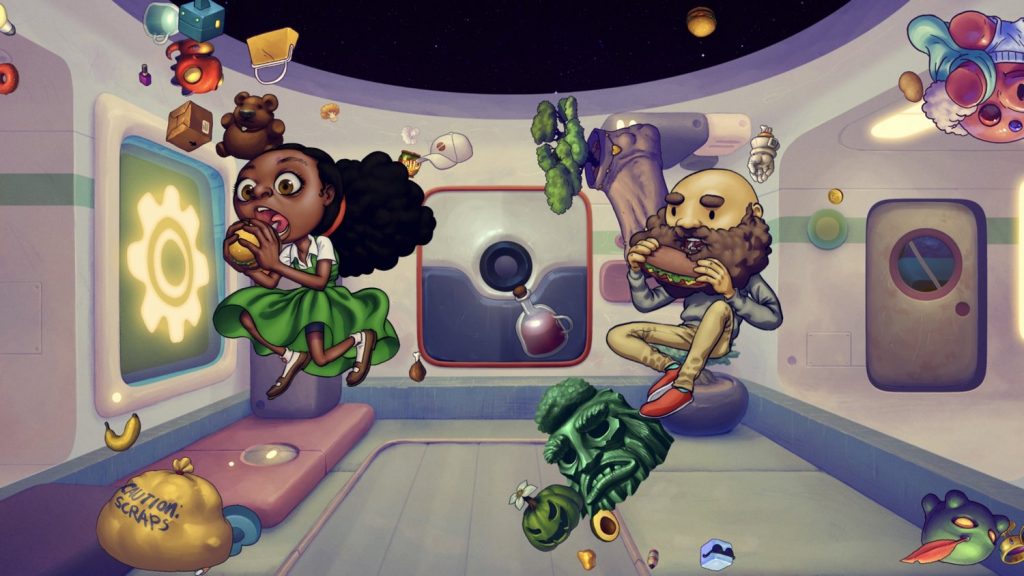 The chip-tunes are a great listen too, and quite funky. With over 20 songs to bop along to while your platforming it’s a pretty great selection to keep you moving forward. 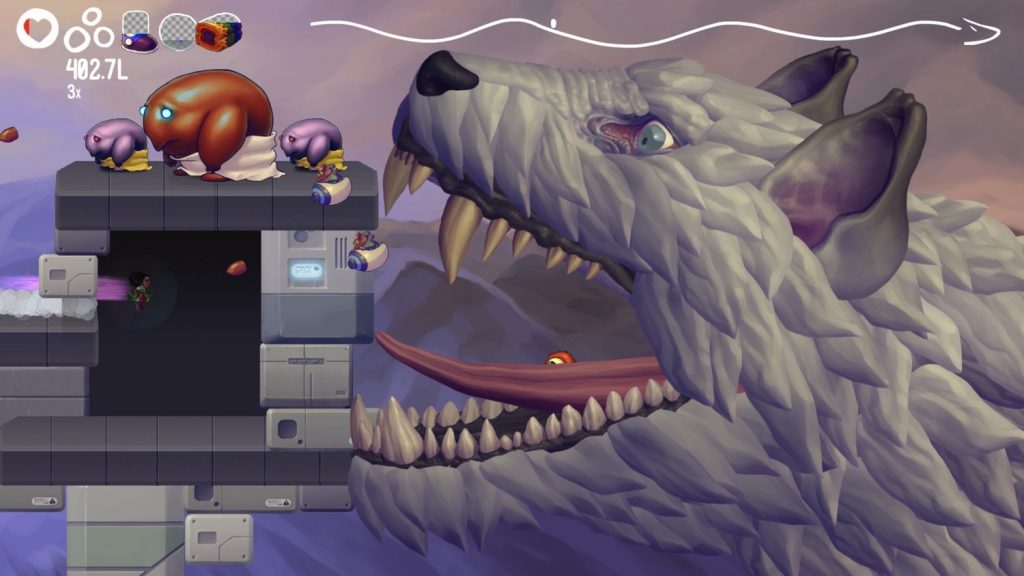 EarthNight is an exhilarating and challenging platformer throwing you into the deep end at the beginning. Thankfully there are dozens of collectables, items, and dragon trophies to find to help you unlock power-ups which will help you to progress further.

EarthNight has a gorgeous art style and bopping chip-tunes to keep you immersed.  It’s not perfect though with some slow-down rearing its ugly head when things get too crazy. However, these are not too frequent and EarthNight becomes a flaming good time once you get into swing of things.

Check out this Lucah: Born of a Dream review, for something hauntingly beautiful HERE!