As is commonly the case with 2D indie platformers, the focus is on the tight gameplay, rather than story, but even Super Mario Bros. at least had an objective, so of course, Eagle Island doesn’t leave you short without a goal. You are Quill, a young boy who travels the sea on a raft with his two faithful companions, the bird duo Koji and Ichiro. A storm brews and you are soon after washed ashore an unknown island. You learn that three elemental birds are in danger as a big foul monstrous eagle has escaped its prison, and it is now up to you to save them.

A simple premise, but we have come a long way in 2D storytelling since the days of an Italian plumber from Brooklyn rescuing a princess. So, the story of modern 2D platformers often proves to have more up their sleeves than they initially let on. Eagle Island is no exception, as you later learn the backstory on the island, and that this big bad eagle, may not be the actual bad guy. Again, the gameplay is what is in focus here, and only before and after boss fights does the game briefly take control away from you to give you more of the tale, but the story still managed to be one of the elements that kept me going. I wanted to see where it would go!

I don’t so much mind AAA games that are sometimes more movies than they are games, as games are my favourite media of storytelling. However, Eagle Island is a shining example that games can still sport a compelling story, while still having gameplay in focus. 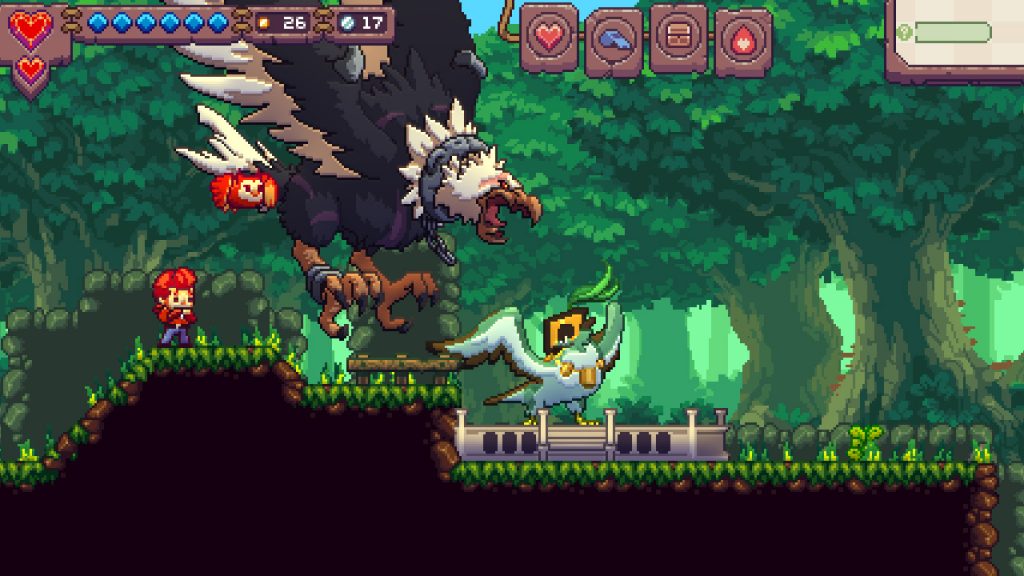 You start off in an overworld where you need to navigate the terrain to find the entrance to the actual stages. Eagle Island is a rogue-lite, meaning that as soon as you enter a stage, the layout changes every time you die. As mentioned before, you control the young boy Quill. You move left and right with the d-pad, jump with A, and your only means of attack… is using Koji as a projectile. By holding X, you ready your feathered friend and can then send him in one of 8 directions. You can even suspend yourself in mid-air while you wait for your target to align. You can’t do this indefinitely though, as Quill will automatically fire Koji after holding the button for about 2-3 seconds, whether you are grounded or airborne. There are a variety of enemies, most of which, for the majority of the game, can be taken out with one single attack, besides, if Koji hits a target successfully, you can immediately fire him again. If he misses, however, you will have to wait a second for him to recoup.

Enemies all drop two kinds of currency, golden seeds, and silver coins (these can also be found in droves in unguarded blue treasure chests). The former you can use on raven guarded treasure chests that you find strewn about the level, that each requires a random amount of seeds. These will contain tokens that Quill can use to improve his or Koji’s performance, such as Koji recovering faster or Quill becoming more agile. Depending on their level of convenience, they will eventually break through, and Quill can only carry 4 with him at a time. I am personally not a fan of this, as I feel that just the fact that you can only carry four with you at a time would be a challenge in and off itself, with you having to prioritize whether to have more health or more practical abilities, but Eagle Island is such a solid experience where everything feels carefully crafted, that I have faith the developers thought of this but figured it just didn’t work? That said, there are a ton of different tokens will all manner of effects, so I highly encourage you to experiment with them. At the few waypoints, Quill finds throughout a dungeon, between which he can teleport, by the way, a merchant bird will let him spend his silver coins on everything from more health to tokens. The catch is that extra health is represented by tokens as well, meaning that they take up one of Quill’s token spots, and will also break over time, putting him back down to one heart (3 hit points).

Upon death, a spinning wheel will allow Quill to win random tokens that gets stored in his bag, and in the first room of every dungeon, you are then allowed to equip any number of stored tokens that you feel will give you a starting edge. If you are full on equipped tokens when you find new ones, these can either be stored in your bag as well, or you can replace it with a currently active one. Keep in mind, though, that the one you replace will be gone.

I guess it should be mentioned that when you start a new game, you are asked between no less than four difficulty options, with the default being” Core”, the next” Hardcore”, and a more forgiving” Casual” also being available. Only on Casual do you have more than 3 hit points by default. Yes, this game was designed to be hard and challenging, you can easily die quickly if you get carried away, though most of the time, I felt death was entirely my own fault.

Aside from the tokens, after beating the first three bosses, each of the three elemental birds will bestow upon you one of their feathers, granting Koji the ability to shift between normal, fire, ice, and lightning powers. Ice freezes enemies, fire creates an explosion upon impact, and lighting allows Koji to zip through multiple targets at the speed of light. Throwing him while these powers are active, will however expend one of his six mana points. These can randomly be regained in blue treasure chests, or by hitting 2 or 3 enemies in a combo. Besides buying health refills a waypoint, stringing together a 4 hit combo, is also the only way to make enemies drop extra lives. Be quick about it though, as the combo counter has a super brief window of opportunity.

The hub world has a sort of Metroidvania feel to it, as some areas will be out of your reach initially, but after gathering the three elemental feathers upon beating the first three bosses, the next three bosses will grant you power-ups that Quill can use himself, like a double jump or swimming underwater.

Each dungeon also sports a big golden treasure chest that requires you completing a small challenge for it to open. In it, you will find one of 16 golden eagle coins (also requiring a token slot), that when all collected will open a secret door. A feat that I myself, as of writing, still have yet to accomplish. 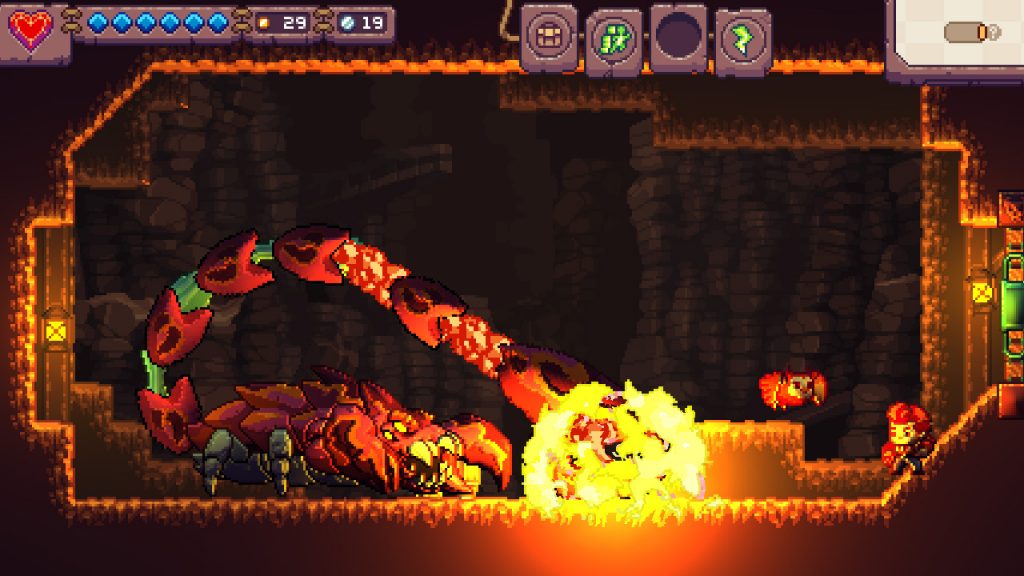 Talk about a living breathing vibrant world. Eagle Island features some of the most gorgeous 16-bit pixel art I have seen in a long time. While the enemy designs I relatively simple, the game’s environments are filled with detail, and the parallax scrolling backgrounds add a lot to the atmosphere and make you feel like the world is bigger than what you are allowed to traverse. You can often tell with these games, by the art style alone, if it is a work of care and love, and Eagle Island is one of those games. 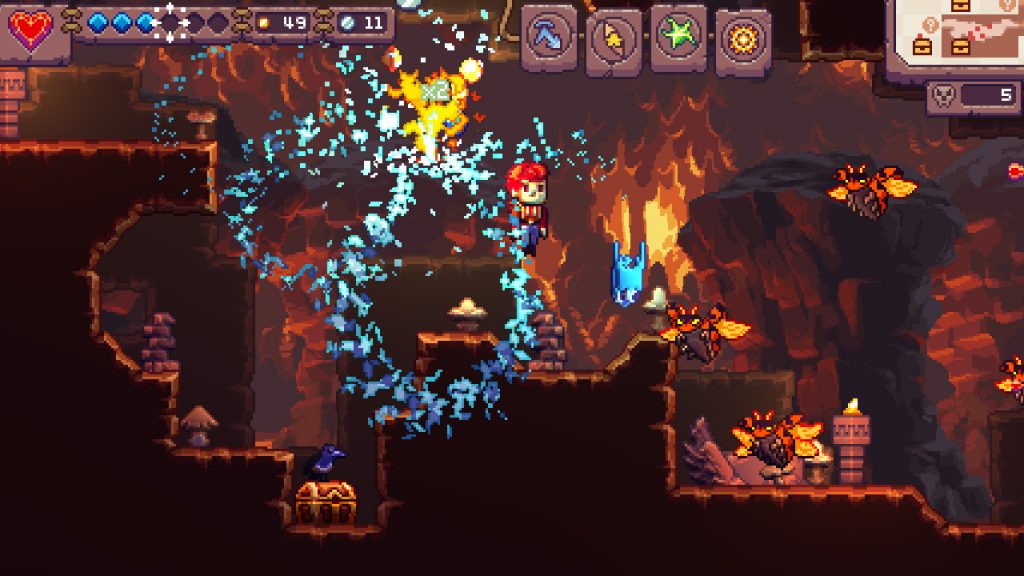 In the sound department, on the other hand, you will find that Eagle Island is a more relaxed experience. Very few of its tracks a headboping, as the game leans more on a somber and subtle atmosphere. It is one of those soundtracks that you won’t be humming after you turn the game off, but it lends heavily to the atmosphere during gameplay. 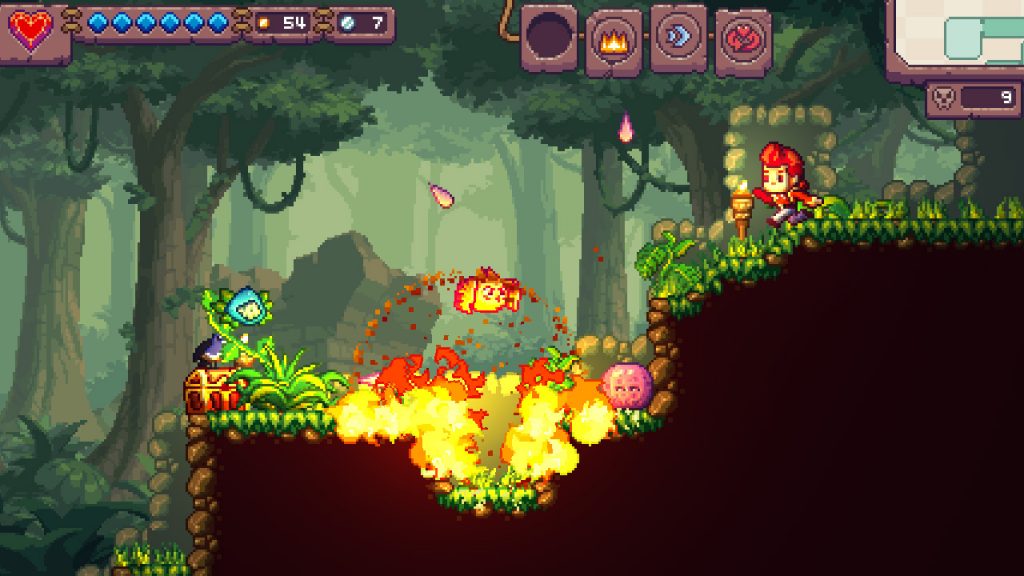 Meeting its goal on Kickstarter back in 2017, Eagle Island is a phenomenal experience, and even at its full asking price of £17.99, which I bought it at because I just couldn’t wait for a sale, I give it my highest recommendation. I am normally not into rough-lites or likes AT ALL, but Eagle Island’s tight gameplay and the colourful world simply drew me right in and made me fall in love with it. So take it from me, even if you are normally not into this genre like me, give it a go, I think you’ll be pleasantly surprised. Are you intrigued but still not ready to dip due to the asking price, you could always wait for a sale, or spend some of your hard accumulated gold coins, but trust me, they will be well spent.

Like that check out our review of Indivisible HERE!