Dusk Diver to sum it up is Persona mixed with Dynasty Warriors on a budget, and what a mix-up this makes. Harking back to the golden age of gaming with PS2 that threw more games at players the Switch would cry with around 4500 games (give or take), not all of them would be AAA smash hits. I am talking at the games you see that were just in the A-Z section of the game store and were never advertised, but you picked it up because the cover looked good. Then you put it in your console hit start and you find that it is a bloody good game, one that pops to mind is always Gungrave. This sums up Dusk Divers reasonably well, not a top-flight game but it is good nonetheless.

The story is so anime it is brilliant. Set in Taipei in the real city of Ximending (with high accuracy). You play as Yumo, a girl with a mysterious power that awakens after her best friend is sucked into a mirror world of Ximending, where Phantoms roam and try to cross over to destroy Earth. Yumo is saved by a ‘Gangster’ named Leo. After which she absorbs all of Leo’s energy, and he reverts back to his original form of a Guardian Statue. It turns out Leo resides in Kunlun and is a guardian of Earth. Now it is up to Yumo and her marital arts skills she learnt from movies to defend the world from the phantoms by using Leo’s powers. After she works at her new job in the convenience store, for her new boss, a stone state… 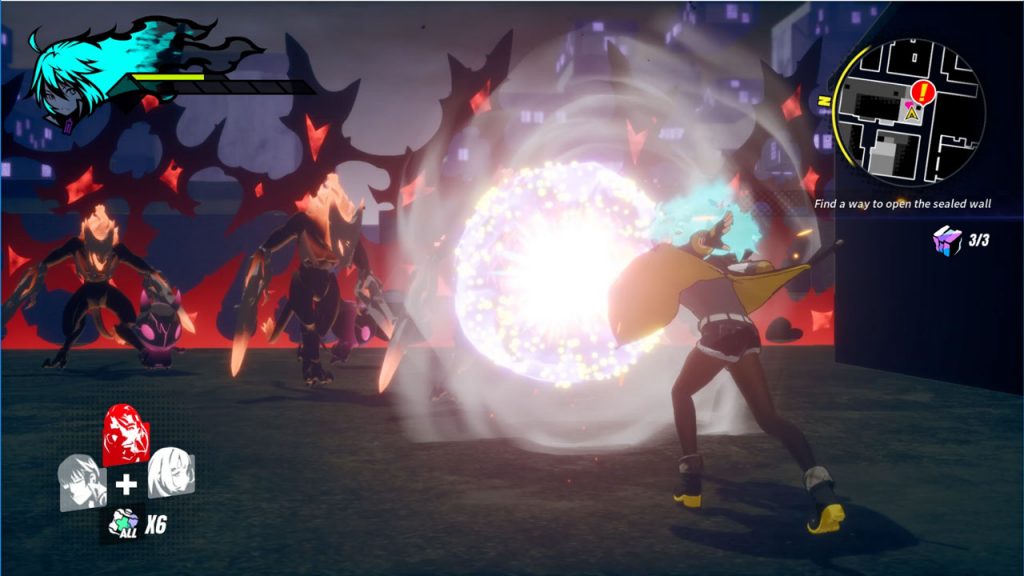 Dusk Diver is, at the core of it, a mini Musou-style game where each mission is split up into sections and each section has waves of enemies to take out before moving on. Being a massive fan of the Dynasty Warriors games this just perfect, as it is smaller scale battles, it feels a bit more fluid in progression.

The fighting system is really where this game comes alive; there are the usual heavy and light attacks, that can be mixed up in a combo. Depending on how many light attacks are made before a heavy will depend on what heavy attack is performed. Each attack feels like it belongs, is fluid and a joy to watch. That is a good thing as you will see these moves a lot, and I mean a lot. Along with the normal attacks, there is a Gaudian attack or ‘Power Assists’, that calls out the equipped guardian to do massive damage. These attacks cannot be spammed, there is a bar that needs to be filled by using normal attacks or by finding objects in the world to replenish them. This set up makes for a simple but effective move set for Yumo to master.

As well as the individual attacks there are a few more moves Yumo can pull off, one is a finishing attack where herself and the Guardian attack together for devastating damage, these are really cool to watch. As well as the ability to use her full power. Once enough orbs have been collected she basically goes Super Saiyan becoming faster and stronger. This only lasts for a limited time, but it looks and feels fantastic.

Like in all Musou style games it is all about the combos! The higher the combo, the better the score is at the end of the mission. As well as the drop rate of pick-ups to replenish health, for example. The score is a big thing here in Dusk Diver thanks to the way the Rifts work. To enter a rift, Dragon Stone Shards, are needed. These are found in Ximending and Youshanding as well as earned for getting an S rank in the missions. This is not as easy as it seems with time combo meter, damage sustained coming together to get the better ranks. The game wants the player to get good and fast. There will be a fair amount of grinding in the game to get better stats to make S Ranks easier to achieve. This makes grinding out levels a critical task. I, for one, do not at all mind that generally but the fact that S ranks are almost vital to proceed in the game, repeating the same level is somewhat tedious after a while.

Overall Dusk Diver is a great game, and I enjoyed it a lot! The grinding may annoy others more though. 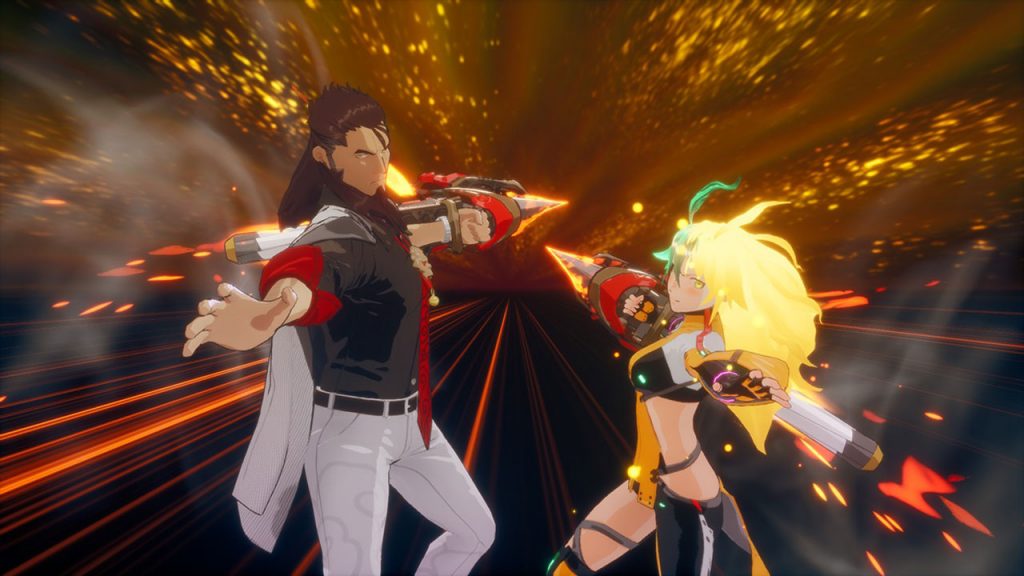 Visually, Dusk Divers takes a lot from two places, one is anime/manga, with the character designs, they are all stereotypical anime characters. The other aspect is the Persona 5 game, as soon as I saw the game startup, I just felt as if I was on a Persona clone graphically. I really liked this take on the game. NPCs are in pastel pinks and yellows until Yumo gets close to them. I cannot put my finger on what I like about this just looks really good, in my opinion.

The visuals really come into their own in Youshanding, the layout is the same with a pallet swap to make the city feel dark and foreboding, with all the shops boarded up. Youshanding feels like a mirror world in every sense. On top of that Yumo’s Hair is on fire, blue fire, and it looks terrific. The attacks all look good and with smooth transitions from one move to the next making for great-looking combos. The special moves have some really cool short cut scenes even if they are repetitive after a while.

Overall the game looks good, do not get me wrong; there is no excellent polish to the looks of the games, showing the level of budget but it still looks good for the money spent on it. I didn’t notice any significant bugs that would stop the enjoyment. As stated it is not as polished as a lot of games, but that is part of the charm. 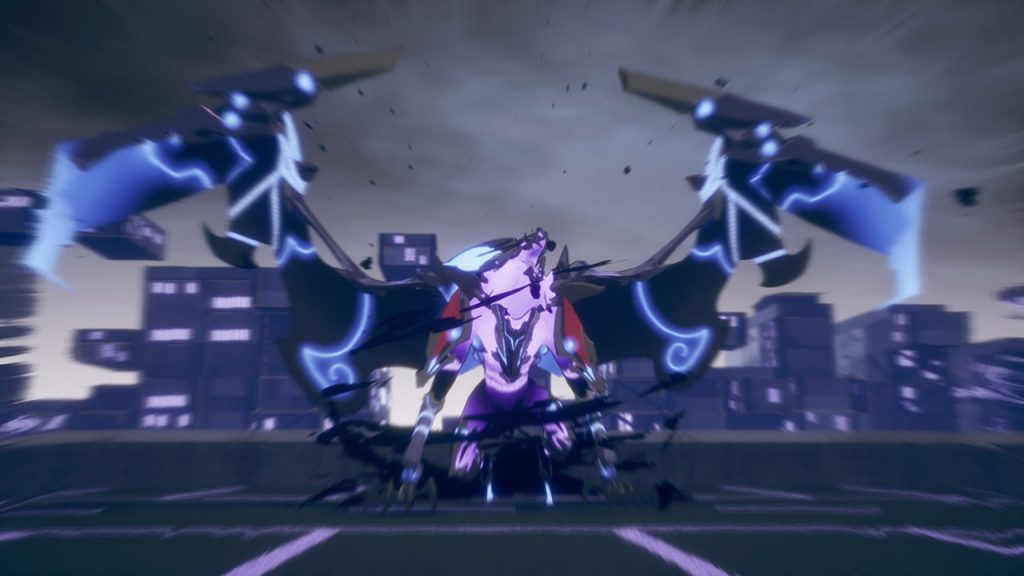 The audio design here is adequate, unfortunately the music gets a little repetitive. In the middle of a fight, the music gets washed away with the sound of Yumo kicking, punching and screaming away through hordes of Phantoms.

The game is fully voiced in both Mandarin and Japanese. Both sets of voice actors do a great job here. However, translation is terrible boarding on amateur a lot of places, spelling mistakes, strangely worded sentences etc. This is not nearly done well enough. 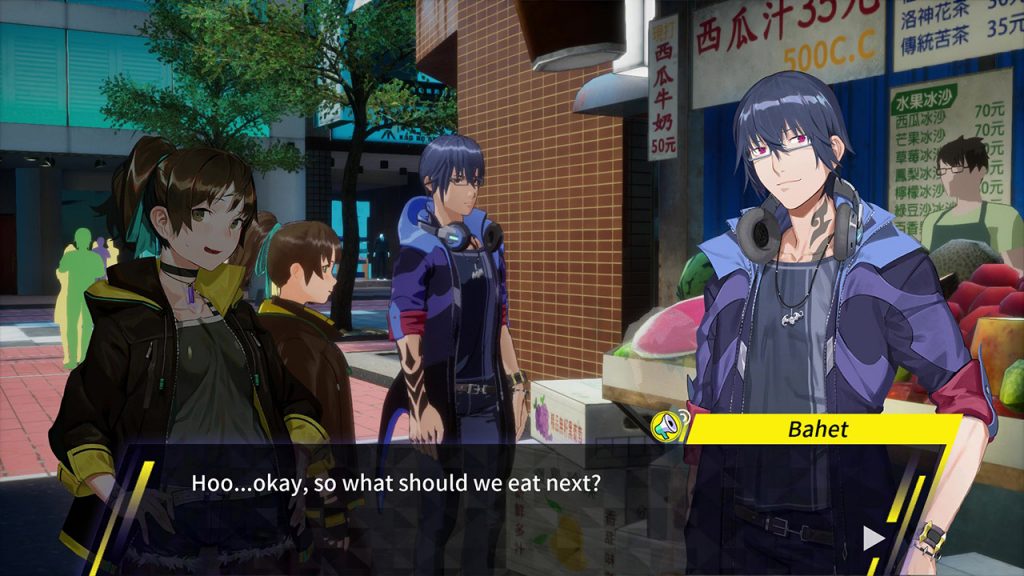 Dusk Diver is definitely a game that does not have the budget to be a standout hit, but if you were to pick it up and give it a try it could surprise most players. I personally love the game, but I have to look at the objective facts. There is a lot to like here, the story, the fighting and the characters, however, there is a lot to dislike the translation job, the rough looks and repetitiveness.

Going into Dusk Diver knowing what to expect with presentation and gameplay then there is a lot to get out of this. If you are only looking AAA budget title then you will be disappointed.

I will be recommending this one as a lot of the problems can be ironed out in patches, but they should not have made it this far to start with.

For more Musou style fun check out our review of Utawarerumono Zan HERE!