It’s no secret that Bethesda, the publishers of DOOM, haven’t had the easiest of times recently.  Despite their recent pitfalls, they’ve always been one of my few favoured triple A publishers; more owing to the fact that they’re one of the bigger publishing houses that fully support their IPs porting to the Switch. When DOOM Eternal was first teased in 2018, there has been ongoing excitement ever since, especially as its predecessor was such a great success in pretty much every department. Now the time has finally arrived to once more become The Slayer. Take out your trusty shotgun and decimate lots and lots of demons.
The story begins with the Doom Slayer returning to Earth around 2 years after the events of 2016’s DOOM. Earth is overrun by demons who have wiped out almost all of its population. It is now up to Doomguy to vanquish these creatures and send them back to where they belong. For the purposes of this review, I am only concentrating on the main campaign for the moment in time. So the questions begs, does the sequel live up to its hype or does it feel hellish to play? Let’s find out….. 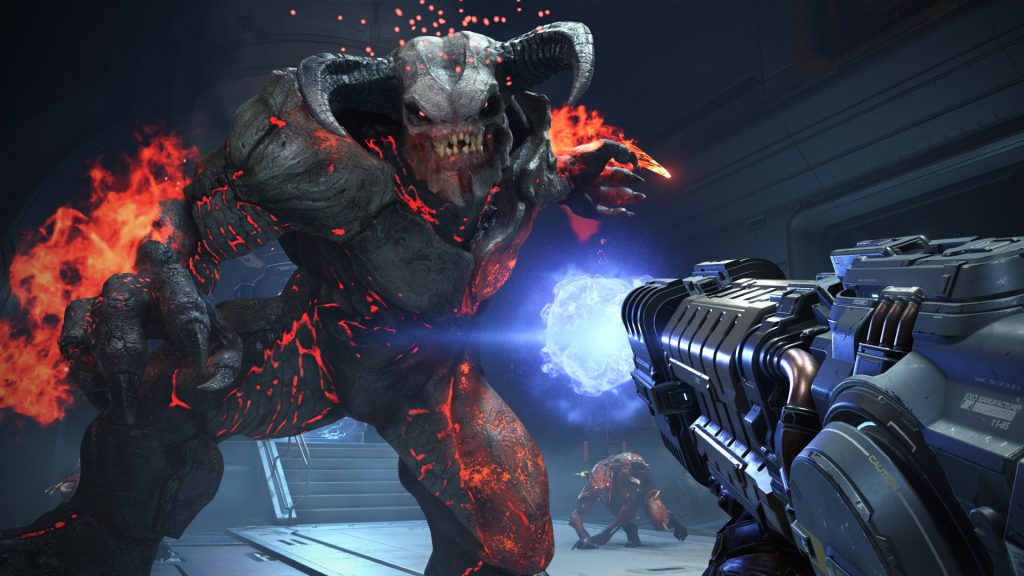 DOOM Eternal has changed little from its predecessor in terms of general gameplay, but when you’ve discovered a winning formula with the first one, why fix what isn’t broken? What the developers at id Software have done though is make an already great game and elevate the sequel even higher. This is no mean feat as it’s always been an entertainment industry trope that follow-ups don’t always bypass successful predecessors. I’m glad to report that in this case, the developers have smashed it.
The one thing you could say about the gameplay loop of DOOM Eternal, and you could say this for all DOOM games, is that it’s quite simplistic; platform your way around various locales, doing the odd puzzle to get from A to B and in between get yourself into a fight set piece featuring a horde of various demons that hell throws your way. What makes it special is in its execution. From its smooth but fast-paced movement, level, gun and monster designs; everything about DOOM Eternal has been made in a way to get the maximum enjoyment out of its simplistic gameplay.
Combat in DOOM Eternal is the best thing about it. Starting off with the shotgun, the action starts straight away after the opening cutscene. You need to be quick on your feet from the off, blasting at first, the weaker demons. You’ll soon get introduced to Glory Kills, a short animation where the Slayer finishes off his weakened(known in game as staggered) opponent in fantastic and very, very gory way. As you progress, you get introduced to more powerful demons, but luckily, you also get access to bigger guns and mods that make your weapons more powerful. You’ll also be able to customise mods to your suit to give you the advantage on the field. That’s where the fun is at. In every level, the game drops you into these set pieces where you usually fight a horde of demons; soon it becomes a fast paced fight for your survival. There is a cathartic sense of pleasure deriving from blasting each and every one of them using the variety of weapons at your disposal; especially when you finish off the more powerful and often annoying monster in a spectacular glory kill (looking at you Arachnotron!). Amidst all the chaos, there also needs to be a thought process and some kind of tactical manoeuvring to survive, making full use of what’s available in the fight arena; from monkey bars or jump platforms. You also need to keep an eye out on your health and ammo during these big fights. There are health and ammo top ups conveniently placed around the area you’re fighting in but they are finite. Luckily, the game gives you ingenious options on how to replenish each one. Glory kill a demon and they will drop health top ups. Once you acquire the flame thrower, setting enemies on fire makes them drop armour and last but not least, using your chainsaw to kill in one shot drops ammo for your weapons.
The game will give you hints during load times and it pulls no punches with its mantra that if you don’t move, you’ll die. For all of its difficulty level, the game does a good job of somewhat holding your hand. The first couple of levels are more like introductions to the various demons that you’ll encounter. First encounters come with a hint box that has a short cutscene with a text box, both explaining the monster’s weak points and how to defeat it. Although it might irk some hardcore players, I welcome the visual presentation to help out beginners to the game. There’s no shortage of help in this game as nearly every aspect of modding, either your weapon or suit, are fully explained.
I’ve never had as much fun playing a single player fps than I did with DOOM Eternal. The combat mechanics just feel right. The adrenaline rush felt during the fights is intense, only further heightened by the games relentlessness to throw everything at you. It’s just a shame that while I’m throwing all the praises at its combat sections, there are portions of platforming that can ruin the experience. There’s some variety in the levels as secrets and collectibles encourages exploration of all parts of each level. There’s even fast travel between each level to go back and reach a previously unreachable spot once you’ve acquired the right skill. My gripe is the jumping sections of levels lead to some unnecessary frustration. As I’ve said before, movement in the game feels robust and good to play in all but some sections of levels where you have to jump from one spot to another. In those instances, the movement can feel a bit awkward and you can easily misjudge a jump. Luckily you respawn back to the nearest ground and only lose a small part of your armour or health as a consequence of falling down. It becomes a problem though when you lose a fair bit of life then come up to a horde of demons that were waiting for you on the platform you finally managed to get on. While this isn’t a major problem, it does somewhat jar the experience a little. Collectibles and challenges gives the game replay value as well as customisable skins and persona for your Doomguy and demons. And there are plenty to collect, including the fabled unicorn skin. 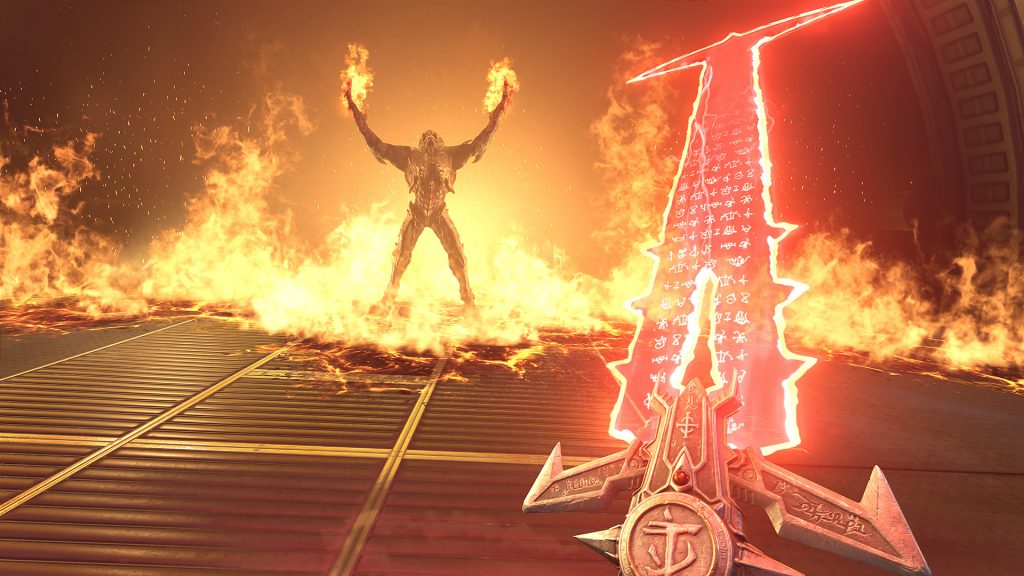 2016’s DOOM, the game that preceded Eternal, was such a great reboot of the franchise not only because of its gameplay but also its subtle reimagining of the demons you love to slaughter. In DOOM Eternal, they’ve somewhat gone back to their roots and modified the demons to subtly look more like the original designs. Of course, this is something that you may or may not notice but it’s littles things like this that make you smile while you’re chopping their bodies in half with the chainsaw. Graphically, Eternal maintains the high standard set by its previous iteration and to some extent bypasses it. The level designs are absolutely gorgeous, if your aesthetic is a hellish apocalypse. And oddly enough, that’s what DOOM Eternal was looking for. Right from the start, you can see the work and effort the devs at id Software have put into making you feel like you’re in the middle of a nightmarish hellscape. The hulking titans carrying a huge part of what looks like a skyscraper and just seamlessly walking along your horizon in the background while you’re moving along to kill its smaller brethren is a sight to behold.

The aftermath of a devastating fight between a sentinel and a titan becomes your playground, which then becomes a way for you to get through the level, after a bit of puzzle solving, is truly next level stuff. There are some texture loading issues that I’ve noticed in my playthrough, but not enough for it to become a problem and diminish the experience. Performance-wise, the game runs very smoothly. The platforming mechanic, apart from the jumping sections, feel nice and robust to play. There’s a nice feeling to the wall climbing mechanic, almost as if every movement you do while wall climbing carries weight. Load times for levels are pretty quick and almost instantaneous when you die and have to respawn back to a checkpoint. 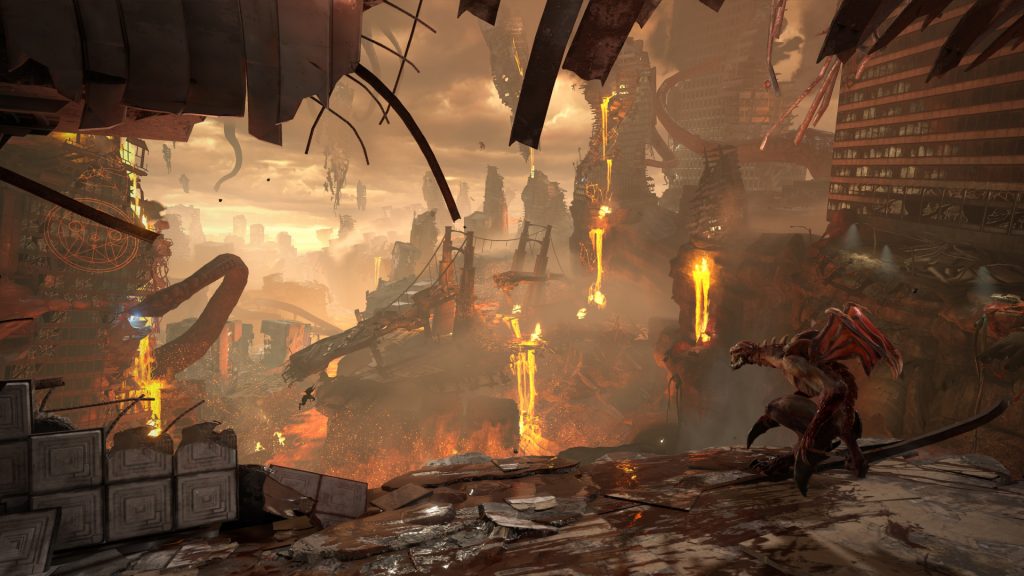 Review sound design and Mick Gordon returns as the games composer and once again the game is filled with heavy metal riffs and death metal screams. And it is glorious. Music always plays a big part in tension building, something that is in abundance in DOOM Eternal. The atmospheric hums and subtle riffs slowly creeps into your ear-hole to give you just a little sense of dread. Once the action ramps up though, you are treated to adrenaline pumping heavy riffs that almost makes you want to headbang if you weren’t so busy killing what’s on screen. Funnily enough, for such heavy use of the genre of music, it’s not intrusive to the gameplay.

They’ve manage to blend it well with the sound effects. The sound effect design is top-notch. You can really feel the sound of you chainsaw, from its engine roar to the squelching gore when you use it on your enemies. The voice acting is pretty solid from the support cast, since our protagonist Doomguy doesn’t actually have any dialogue. There are some funny snippets within the ARC announcements when you activate them. 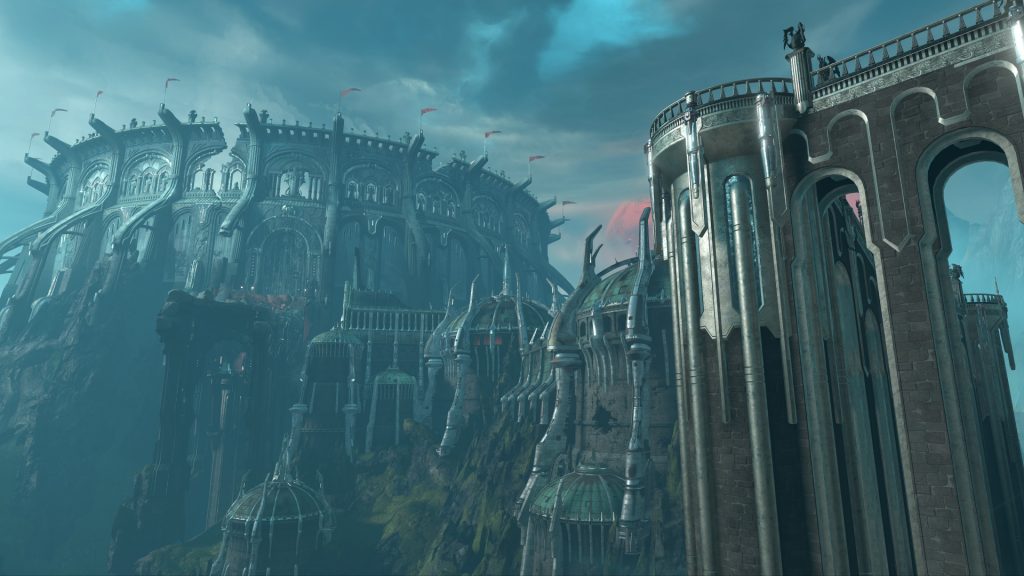 Bethesda must be breathing a sigh of relief that id Software have once again come up with the goods and produced a superb title. They’ve taken their much loved 2016 DOOM, given it some more love, made some changes and ramped up the action to make this title a must have. I highly recommend this title even more so with the current state that the world is in. Bashing demons, chopping them in half, goring their brains out with your blade, smashing their head in never, ever gets old. The only negative aspect of the game I’ve found is that some portions of the platforming can get frustrating and doesn’t really fit into the movement mechanics; which can diminish a little bit of the experience. Overall, though, DOOM Eternal is everything you want in a sequel and more. It’s so good that I can’t wait for it to come out for the Switch as the guys at Panic Button are back to do the port. I’m running out of superlatives to pile on this game so I’m going to finish up by doffing my hat to id Software. You guys have made a banger! Long live the DOOMSLAYER!

Check out Our review of Snack World for somwthing different HERE!

My Aunt Is A Witch