The Disgaea series is one of the games that keeps on coming back and back and back. I love it! These games hold a special place in my heart. When I worked in a GAME store many moons ago, I was the guy who played JRPGs and basically anything niche, and I still am. Disgaea was one of the franchises that has stuck with me since I first played it. Disgaea 4 was one of my favorites and in it is first release I spent hundreds of hours playing.

Here you take on the role Valvatorez, a vampire who once promised a woman 400 years ago that he would not drink blood until he could instill fear in her. She died before he could do so and this lead to a loss of most of his powers. Now demoted from his once tyrant status he has a menial job training Prinnies. When the Corrupternment orders were issued to cull all Prinnies, Valvatorez decided to put a stop to it and plots a rebellion. 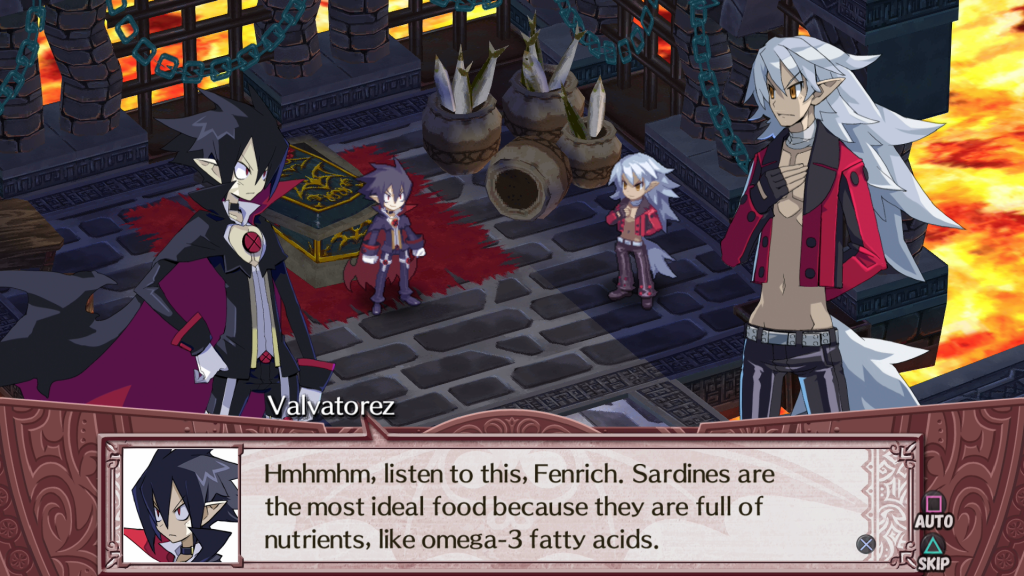 In terms of gameplay, there is a ton of stuff that the player can do. I will stick to the main features. There are battles, side quests, mini-games, and so on.

These types of RPG’s are based on a grid system that the characters move on one at a time until one party is wiped-out. The big draw from the gameplay aspect for most players is the crazy over the top combo attacks that the team can perform. They are entertaining to pull off, especially when they are done correctly. It is possible to throw your teammates and pretty much anything that’s not nailed down. Along with the ridiculous max level cap of 9999. This is a game that will take a LONG time to max out one character, let alone your full roster. So if you want to fully complete this one, then just have a spare 1000 hours at least.

As the missions progress the game introduces Geo Blocks and Geo Grids. These areas will contain either a buff or a debuff depending on the colour. This system is straightforward but changes up the gameplay so much, and makes the flow of battle change dramatically from simple to tactical or even making battles more of a puzzle. This effectively will make most battles different and entertaining so with the grind that’s a good thing. For instance, you could pick up the enemy, throw them on a debuff block, then combo attack the enemy with characters placed around that block. This is just one way to use the blocks, also a very satisfying way to use them.

Valvatorez’s base is the game hub where missions are received, healing/resurrection as well as mana regeneration. One excellent little addition that was added (I believe from an earlier entry) was the cheat shop. It allows for the players to effectively cheat by changing the HP of enemies, lowering enemy attack or increasing the attack of your party etc. This will allow for the newer player to the games tp be able to enjoy it rather than getting stuck. As some of the battles have a bit of a difficulty jump.

It is also possible to propose a bill to the senate to allow for new items to be sold, more units to be made and so on. To get the proposal to be a guaranteed pass, the senators can be bribed so they will vote for it to be passed. It is a simple concept but something I really liked.

Now we move on to one of the most vital parts of gameplay, that is somewhat underutilized by some players, Item World. Item World is where the party enters the item and has to fight down to the lowest floor. The floors, as well as the enemy level, will depend on the item it’s self. This goes for every item in the game, the lower you get, the better the improvement is, along with extra levels for the party. After 10 floors there is a checkpoint that will allow the party to exit the item.

Want a game worth diving into this has to be it, it will keep you on your toes as well as entertain the player with the over the top action. 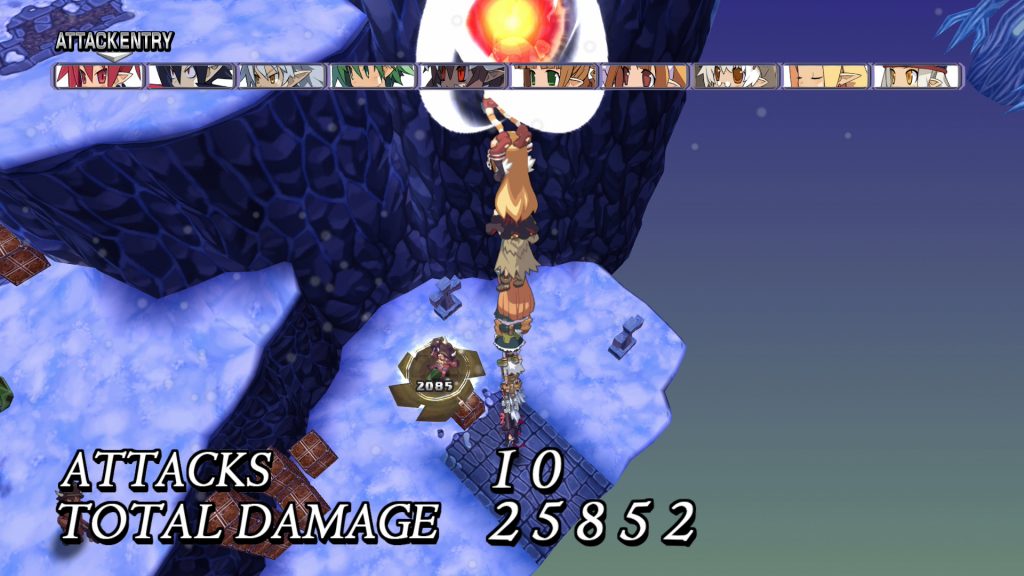 Disgaea 4 + looked good on the PS3, with its cartoon-style 2D graphics on a top-down isometric camera angle. Now back on the PS4 in 1080p the game looks even better. The colours pop more and the characters look fantastic. The special effects in battles and the over the top attacks seem to have benefited most from this improvement.

With my time playing, there were no bugs and performance was fantastic. 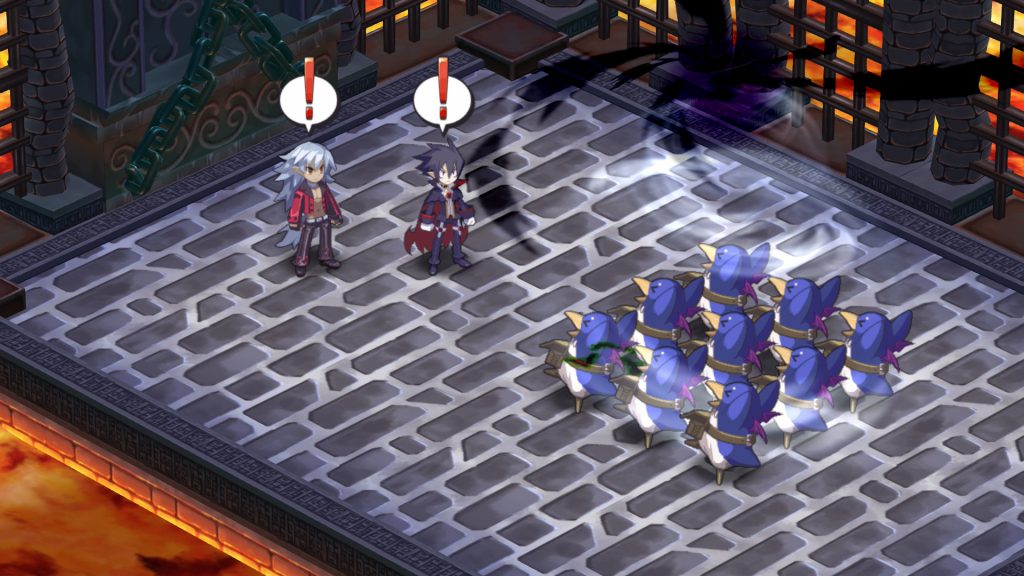 Disgaea 4 + the sounds seem to have had an overhaul from the soundtrack and the sound effects, not like they were terrific in the original but a step up form the previous entries. The voice acting is as the same just decent from the start. 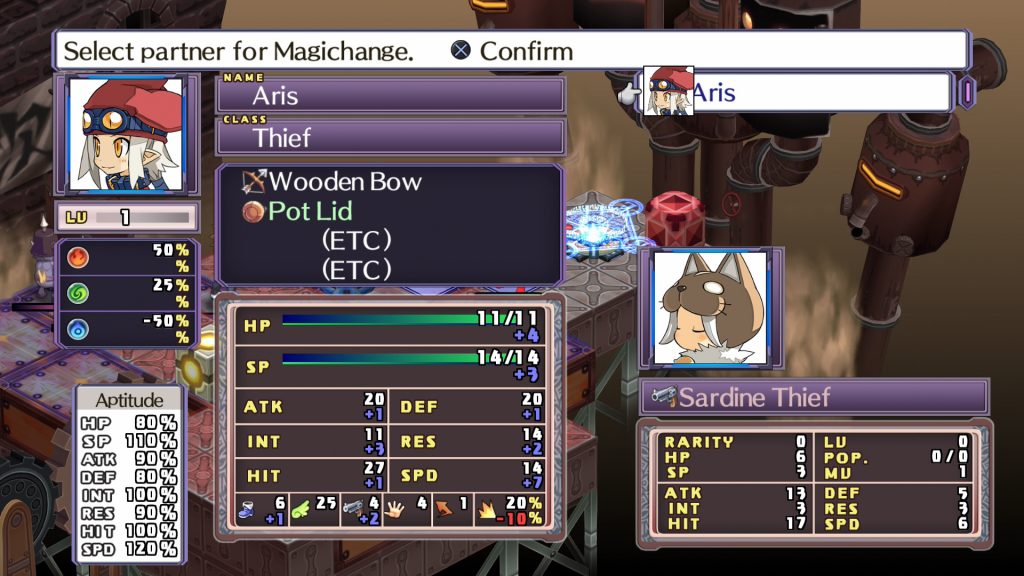 As a full package, the game is excellent. There are some significant improvements not only graphically but the Quality of Life changes make the gaming experience better, especially with the gaming length. Including all DLCs from the original release, this is the best way to experience Disgaea 4 Complete +. I would recommend this game for anyone who likes some great over the top turn-based gameplay.

For something a little different check out our Call of Cthulhu review HERE!

The Cruel King and the Great Hero